The c-Jan N-terminal kinases are members of the mitogen activated protein kinase family of signaling proteins. Amino pyridine based compounds, 4-anilino pyrimidine derivatives, and 2-pyridine carboxamide derivatives have been identified as potent JNK inhibitors with good cellular activity. In this study we calculated molecular topological and quantum chemical descriptors of 15 training compounds and three quantitative structure activity relationships models have been constructed. The significance of three models is judged on the basis of correlation, Fischer F test and quality factor (Q). This study is helpful for screening potent inhibitors of protein kinases.

Mitogen activated protein kinase 8 (MAPK8) is involved in integrating multiple biochemical signals that regulate proliferation, differentiation, transcription regulation and development [1,2]. The c-Jan N-terminal kinases (JNKs), which exist as three isoforms, JNK1, JNK2, JNK3, are also members of the MAP kinase family of signaling proteins. JNKs can be activated by various stimuli such as environmental stress, cytokinase and fatty acids. In a number of human diseases, JNK1 activity is involved as JNK1 is widely expressed in tissues, and was believed to play a key role in linking obesity and insulin resistance. By way of phosphorylation of the insulin receptor substrate (IRS-1), JNK1 disrupts the insulin signaling cascade, which leads to the degradation of IRS-1. Apart from playing this role JNK1 activity is elevated in adipocytes of type 2 diabetic patients. Hence JNK1 could potentially increase the insulin sensitivity and may be useful as therapeutics for the treatment of type 2 diabetes.

Aminopyridine based compounds, 4-anilinopyrimidine derivatives, and 2-pyridine carboxamide derivativeshave been identified as potent JNK inhibitors with good cellular activity. These compounds bind to the ATP site in an unusual manner, provide the crucial hinge interactions needed for JNK1 activity [3-5]. Benzothiazol-2-yl acetonitrile pyrimidine core base derivatives are explored as potent JNK3 Inhibitors [6]. Docking studies of aminopyridine carboxamide inhibitors of JNK1 has also been performed [7].

In quantitative structure activity relationships (QSAR) studies, two components are essential; calculation of the structural descriptors from the three dimensional molecular structure and a statistical relationship between a set of parameters determined from their structures and the biological activity exerted by a series of compounds.

The training set and the test set data were taken from a binding DB [8-10] database (www.bindingdb.org).

The initial structures of training and test molecules were constructed by ChemSketch. For all the molecules studied, calculations of quantum mechanical descriptors were performed using the Gamess quantum chemistry package installed in pentium-IV machine with Dual Core processor in Windows platform.

The Wiener index (W) [11], the first topological index reported in the chemical literature, may be calculated as,

are the degrees of vertices in the path of length h. The path length parameter (Ph), number of path of length h (h=0, 1,…,10) in the hydrogen suppressed graph, are calculated using standard algorithms.

The average information content is defined on the basis of the Shannon information theory and is calculated as follows [14,15],

where ni is the number of atoms in the ith class and n is a total number of atoms in the molecule. The division of atoms into different classes depends upon the coordination sphere that one has taken into account. This leads to the indices of different order k. The information content (IC) is equal to average information content multiplied by the total number of atoms. Other information content indices (SICstructural IC, CIC-complementary IC) [16] are defined as, SICk = ICk/logD 2…(4) and CICk = logn 2- ICk…(5). Calculations of quantum mechanical descriptors like HOMO energy, LUMO energy, and Dipole Moment, were performed by DFT/B3LYP calculation and the basis set 6-31G (d) was used [17]. The statistical method used in this study was multiple linear regression (MLR). Topological indices and MLR were computed using program written by us in Fortran-77.

Structural details of the compounds (training and test set) used in this study and their biological activity are given in Table 1. The list of the structural descriptors (SIC, CIC, W, hχ), dipole moment (μ), HOMO, LUMO energies obtained from DFT calculation of 15 training compounds and are presented in Table 2. In this study, several regression equations were constructed. Among the regression results, three equations were selected as models, which are given in Table 3. In these models, N is the number of data points; R is the correlation coefficient between observed values of the dependent and the values calculated from the equation. R2 is the square of the correlation coefficient, and is a measure of the fit of the regression equation. R2 CV, the “leave one out” (LOO) scheme, a model is build with N-1 compounds and the Nth compound is predicted. Each compound is left out of the model derivation and predicted in turn. An indication of the performance of the model is obtained from the cross validated coefficient (R2 CV). S is the standard deviation of the regression. Fischer statistics (F) is the ratio between explained and unexplained variance for a given number of degree of freedom. Higher values of F test indicate the significance of the QSAR model. Q is the quality factor. High values of Q indicate high predictive power of the QSAR models and the lack of “over fittings”. By using model number 1, 2, and 3 the theoretical log IC50 values of 15 training compounds are given in Table 4 together with experimental log IC50. Among the models, the Model 3 with the R=0.930, R2=0.865, R2 CV=0.470, S=0.216, F=11.533, Q=4.306 turns out to be the best fit model.

The correlation graph of training and test compounds between experimental log IC50 and predicted log IC50 (using Model 3) is presented in figs. 1a and 1b, respectively. The indices of the 6 test compounds are presented in Table 5. Using the model number 3, we calculated the theoretical log IC50 of the test set, which appeared in Table 6. The results appear to be in fair agreement
with experimental log IC50.This QSAR study has been carried out by considering the density functional theory (DFT) and statistical methods. Three QSAR models with different parameters are formed. An analysis of the descriptors that involved in the models indicated that log IC50 is influenced by first order SIC, first order CIC, W (Wiener index) hχ (Randiac’s connectivity index), HOMO energy, LUMO energy, and Dipole Moment of the compound studied and these QSAR models may be employed to determine the activity of the designed compounds. 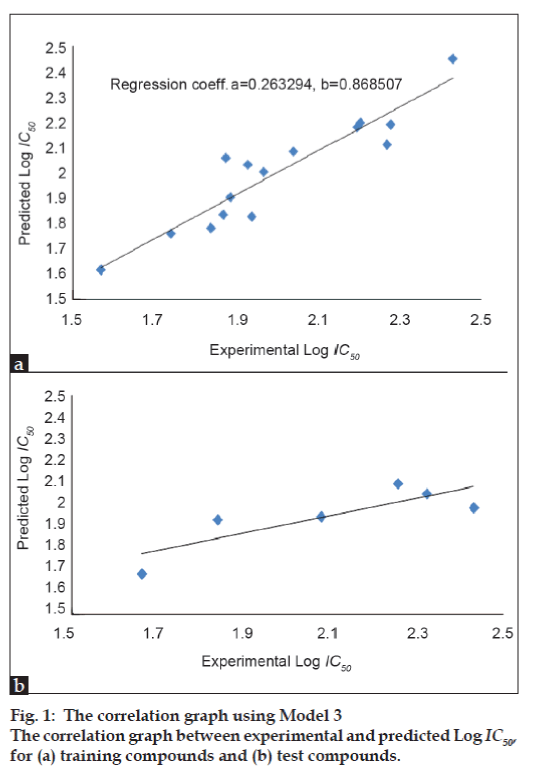 We acknowledge the Department of Biotechnology, Government of India for providing two grants BT/ BI/004/93 and BT/BI/019/99.