Blood products laboratory is a Central Drug Testing Laboratory for testing quality standards of plasma-derived products in India. Blood products laboratory received 243 batches of human normal albumin during the financial year 2015-16 from indigenous and international manufacturers for testing. As per Indian Pharmacopoeia, the biuret method is different from European and British Pharmacopoeia for protein estimation, therefore, harmonisation of a such method is necessary as per World Health Organization’s recommendation. In this context, blood products laboratory conducted a comparative study between the methods of Indian, European and British Pharmacopoeia for protein estimation in biologicals, especially for human albumin preparation to prevent any bias regarding protein content between indigenous samples and imported products. Results showed that both the methods were significantly not different (p=0.05), and also showed that Indian Pharmacopoeial biuret method was more sensitive although reagent stability was lower than that of European and British Pharmacopoeial methods.

Compendial methods are considered as statutory for the local manufacturers, controllers and other stakeholders for ensuring quality control of pharmaceutical and biological preparations [1]. World Health Organization (WHO) promotes harmonized and suitable quality control testing standards among all stakeholders of WHO with the aim to facilitate analytical methods, which can be reproduced with suggested equipment at primary pharmaceutical quality control laboratories [2]. National Institute of Biologicals (NIB) is an autonomous Institution under the Ministry of Health and Family Welfare, Government of India, established in January 1992. NIB acts as a National Control Laboratory for assessing and assuring the availability of standard and quality biological products both indigenous and imported. Blood Products Laboratory (BPL) of NIB is a Gazette-notified Central Drug testing laboratory for testing of seven plasma-derived products, namely human albumin (HA), human normal immunoglobulin, human coagulation factor VIII, human coagulation factor IX, plasma protein fractionation, fibrin sealant kit, and antiinhibitor coagulation complex [3].

Human plasma is a source of important medicinal products, which is obtained by a combination of largescale processing steps known as “fractionation”. It is important that these products have an appropriate quality and safety proﬁle. Plasma-derived products are regarded as medicinal products worldwide and their marketing authorization, which involves the official approval of the production process and quality assurance system. Central Drug Standard Control Organisation (CDSCO), New Delhi has the duty to enforce regulations for quality and safety of biological products in India.

HA is a major plasma-derived product produced during plasma fractionation. Protein concentration is one of the paramount quality control testing parameter for HA. BPL received HA for testing from the indigenous manufacturer or imported samples. Most of the importers follow biuret method for estimation of total protein, but Indian Pharmacopoeia 2014 (IP 2014) prescribes the Kjeldahl method for estimation of total protein in HA. Moreover, biuret method for the protein estimation mentioned in chapter 2.3.49, IP 2014 [4] is quite different compared to the method recommended in British Pharmacopoeia (BP) [5] and European Pharmacopoeia (EP) [6]. Since BP and EP are already harmonised with each other and following the same method. BPL conducted a literature review by using different online electronic tools like PubMed for any comparative or harmonised study conducted, but supportive data is not available. Therefore, BPL conducted the present study to evaluate the various pharmacopoeial biuret methods and their performance comparison for plasma-derived product HA preparation and to evaluate comparative differences and resemblance based upon analytical data and possibility of harmonisation of biuret method in IP (2014) with other international compendia biuret method.

Total ten batches of HA S1-S10 (five each of 5.0 and 20.0 % stated value) were randomly selected for the study, each sample was analysed ten times in duplicate. Sigma-Aldrich protein standard bovine serum albumin 20 % (Lot no SLBG8533V) was used to plot a standard graph (serial dilution of 2.0 to 10 mg/ml).

Reagents of biuret methods for BP and EP were prepared as described in BP and EP Pharmacopoeia section 2.5.33, in brief, 3.46 g of copper sulphate was dissolved in 10 ml of warm distilled water and labelled as reagent 1, then 34.6 g of sodium citrate and 20.0 g of anhydrous sodium carbonate were dissolved in 80 ml of warm distilled water and labelled as reagent 2, both the reagents were mixed, allowed to cool, and make up to 200 ml with distilled water, labelled the reagent as Biuret reagent. Two millilitres of 0.5 % test solution or 2.0 ml normal saline in case of blank (0.9 % NaCl) was taken, and an equal volume (2.0 ml) of 6.0 % sodium hydroxide solution and 0.8 ml biuret reagent were added, mixed, and incubated at room temperature (25°) for 30 min; the absorbance at 545 nm was determined against blank by using UV/Vis spectrophotometer (Varian) and data were acquired through Cary WinUV software. Standard curve was plotted over a suitable range of standards situated between 1.0 and 8.0 mg/ml.

Biuret reagent as per IP, 6.0 g sodium potassium tartrate and 1.5 g of cupric sulphate were dissolved in 500 ml distilled water, 300 ml of 10 % sodium hydroxide and 5 g of potassium iodide were added and make it 1000 ml with distilled water and labelled as biuret reagent. To 1.0 ml 0.5 % test solution, 4.0 ml of biuret reagent was added, mixed and incubated at room temperature for 30 min, absorbance at 550 nm was determined against blank and standard curve was plotted for the calculation of test solution. Method validation parameters were evaluated as per ICH Q2(R1) and quality control policy of NIB as described previously [7,8] and all the results were statistically evaluated by using GraphPad Prism 7.0, followed by the student t-test. Significance was considered at p<0.05 level as shown in Table 1.

Values are shown as mean (n=10), Standard deviation, standard error of mean and % RSD for each batch. NS is Non-significant

Results suggested that both the methods were precise and accurate and results were comparable with each other showing no significant difference with each other for the estimation of total protein in HA at 5.0 mg/ml concentration levels. However, further analysis of both methods for limit of detection (LOD) and limit of quantification (LOQ) by standard deviation of the response and the slope method showed that biuret method as IP is more sensitive compared to BP/EP as LOD and LOQ for the IP method were 0.0333 and 0.1011 and for the BP/EP method were 0.1194, 0.3619, respectively (Table 2). This could be due to sodium potassium tartrate, which helps to stabilise the cupric ions in low alkaline medium and also enhance the reaction sensitivity, further an increase in sodium hydroxide might have led to increasing in turbidity [6].

The IP 2014 method simpler and easier to perform due to single working reagent but stability of the reagent was lower at room temperature as per the observations made. A study conducted to evaluate the stability of reagent at room temperature (25° ± 1) for six months by visual inspection for any turbidity or precipitation in the reagent. Results suggested that IP biuret reagent was stable up to 15 d compared to the biuret reagent of EP/BP, which was found to be stable upto 6 mo, this could be due to an addition of sodium hydroxide and sodium potassium tartrate with cupric sulphate, which reduced the stability and led to precipitation of Cu2+ ions in the reagents. During establishment of the IP method in BPL, it was observed that in the IP chapter 2.3.49, standard preparations listed were in the range of 1.0- 5.0 mg/ml and prescribed concentration of the test solution must be 5 mg/ml, this is against the standard practice of good analytical procedure that the test solution concentration should fall in the middle of the standard curve and not on the extreme end of the curve. This problem could be easily avoided by plotting reference standard upto 8.0 or 10.0 mg/ml as shown in Figure 1. In conclusion, both biuret methods of IP and EP/BP were accurate and precise for the estimation of proteins in blood derived biological products, IP method was more sensitive and easy due single working reagent, on the other hand, BP/EP method has better reagent stability, which reduced the batch to batch variation. Research Institutes or National Regulatory laboratories could use any method or alternative for each other as both the methods were found to be totally in harmony with each other. 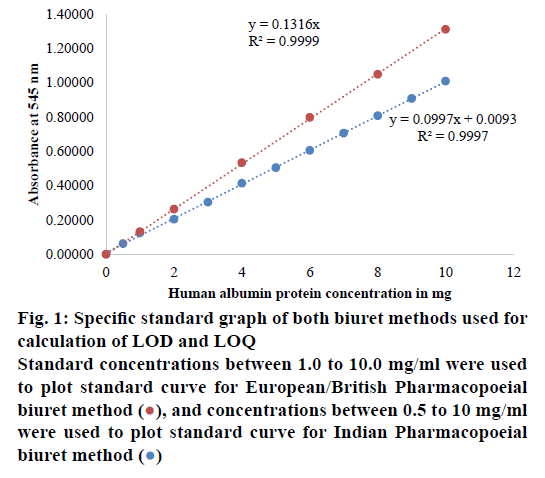 Figure 1: Specific standard graph of both biuret methods used for calculation of LOD and LOQ
Standard concentrations between 1.0 to 10.0 mg/ml were used to plot standard curve for European/British Pharmacopoeial biuret method (

), and concentrations between 0.5 to 10 mg/ml were used to plot standard curve for Indian Pharmacopoeial biuret method (

The authors thank the Ministry of Health and Family Welfare, Government of India for providing the testing facility. Authors also thank and gratefully acknowledge the support of all laboratory staff.