A critical study on availability and price variation between different brands: Impact on access to medicines

The present study aims to present a representative view of the existing situation of availability and price variation, by comparing data about brand availability, and difference in pricing between various brands of 20 drugs under six therapeutic categories. The project involved collecting data from 10 retail outlets from the city area, 10 outlets from town area and 15 retail outlets from the rural area spread over a time span of 6 months. The drug categories studied were analgesics, antibiotics, drugs acting on cardiovascular and central nervous system, drugs acting on gastrointestinal tract and steroids. Data analysis showed that as compared to data on national availability of different brands, the number of brands available in the town, city and rural segments in general, are less. In all sectors, town, city and rural areas, almost equal number of brands is found to be available, with a slightly higher availability in the cities. Price difference between different brands (single drug or drug combinations) varies up to an extent of 881% (in case of amlodipine) on the higher side, and the lowest being 7% (in case of doxycycline). Out of all brands studied, it was observed that the highest priced brand was the most sold brand in cases of 5 products (single drug/combinations), and the lowest priced brand was the most sold in case of 2 products. It emerged that prices of drug molecules including those under National Essential Drug List, increased during 1996-2004 to a certain extent. It was noted, that % increment of price of drugs under Drug Price Control Order was less than those of drugs not under the purview of Drug Price Control Order. The difference in price between various brands of the same drug is too wide.

Though the pharmaceutical Industry in India has grown with tremendous pace since independence, not more than 40% of the population of our country can enjoy the benefit of modern medicine [1]. Cost of health care is rising rapidly the world over [2,3]. Experts in our country apprehend that the price of drugs in India too will be high as a consequence of recent changes in global policy, and then it may not be possible to make medicines reach a broad fraction of the population [1,4]. This may be due to complex socioeconomic reasons, including a number of factors e.g. not following the Essential Drug List, an imperfect drug distribution system, irrational use of medicines, misuse of drugs, multiple prescribing to name a few. Though several investigators worked in this field in different other countries [5-7], as well as in India [8-11], there is still a lot of scope for a systematic and well-designed scientific study to identify the reasons and to suggest probable measures to solve the problem.

Health administrators and policy makers need to urgently redesign the existing health infrastructure to extend health care to a greater section of people at an affordable cost. For this purpose it is essential to collect data to assess the Drug Utilization Pattern of different countries and to make necessary interventions and policy changes to eliminate the shortcomings present, if any.

Indian markets are flooded with a huge number of branded formulations, available for every drug molecule, with simultaneous pricing difference between the different brands of the same formulation. This apart from creating confusion among innocent consumers, often, allows them to be misled by unfair traders. The current study aims to project a representative view of the existing situation, by collecting data about brand availability, and difference in pricing between various brands of 20 drugs, under six therapeutic categories.

The project involved collecting data from 10 retail outlets from the city area, 10 outlets from town area, and 15 retail outlets from the rural area of West Bengal, spread over a time span of 6 months (fig. 1). Each retail outlet in a rural area caters to lesser number of patients in comparison to a town or city outlet. Thus to get an approximately equivalent customer base, 15 retail outlets were randomly selected. The study involved 20 commonly used drugs available under different brands, with different pricing. The drug categories studied were analgesics, antibiotics, drugs acting on CVS, CNS, drugs acting on the GIT and steroids. Data collected were analyzed and the following interpretations were made [12,13]. 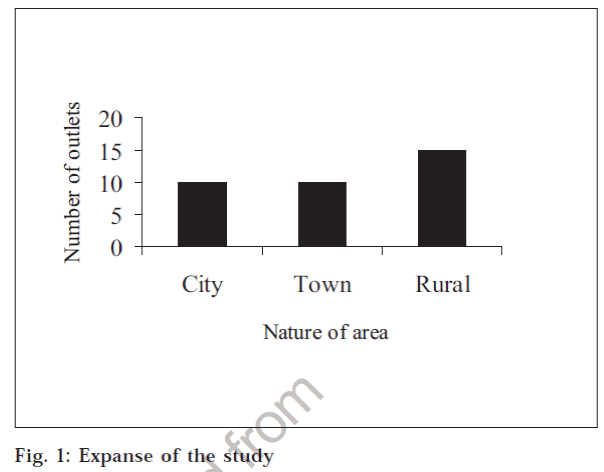 Figure 1: Expanse of the study.

Data analysis showed that as compared to national availability data of different brands (as per CIMS) [14], the number of brands available in the town, city and rural segments in general, in West Bengal are less. It may be due to the fact that all the manufacturers are not marketing each of their products uniformly at all corners throughout the country. Some of them target a specific state or district. Sometimes they may prefer marketing in cities or towns or rural areas. Brands not available are manufactured by less reputed companies. In all sectors, town, city and rural areas, almost equal number of brands are found available, with a slightly higher availability in the cities (Tables 1 and 2). This may be due to the higher demand in cities because of more practicing specialist physicians as compared to rural areas, more affordability, and easy access for the city-based population to different brands, due to higher no. of wholesale and retail sale outlets. In case of prednisolone, ibuprofen and ibuprofen+paracetamol reverse trend was observed. The reason may be that all the products of all manufacturers are not listed in the CIMS. Extra brands available are not popular brands and manufactured by mediocre companies. However, prices of those products were comparable to that of the products of standard companies.

Out of the 20 drugs studied, 13 were included in the National Essential Drugs List [15] and 14 were found in CIMS-1996 [16]. Out of these 14 products that were listed in CIMS, 11 products were included in the National EDL. Among these 11 products, prices have increased (over a span of 1996-2004) for 8 products, and decreased for 2 products, and has remained unchanged for one product only. The maximum rise in price has been 131%. Out of the 3 drugs not included in the EDL, price of 2 molecules have increased, over the years but price decrease was noted for one drug. Analysis showed that prices of drugs in general, including those within the scope of EDL, have increased (Table 3).

Among the 20 drugs studied, 8 were under DPCO-1995 [17] It was noted that % increment of price of these 8 products was less than those of drugs that were not under the purview of DPCO. Prices were reduced for only 2 drugs within DPCO.

Large number of brands available for a drug is a matter of concern, since patients get confused, as well as random brand substitution takes place, with disregard to bioequivalence, therapeutic equivalence and cost of treatment. The difference in price between various brands of the same drug is too wide, leading to unfair burden on the consumer. Due consideration must be placed on pricing of drugs in the EDL, to increase their accessibility to common people. DPCO appears to be an effective tool to keep in rein the drug prices.