A simple, rapid, specific and sensitive liquid chromatography tandem mass spectrometric method has been developed and validated for the determination of doxycycline from the human plasma. Doxycycline is extracted from human plasma by solid phase extraction. Demeclocycline was used as an internal standard. Detection was performed at transitions of 444.800→428.200 for doxycycline and 464.700→448.100 for demeclocycline using mass spectrometry. Chromatographic separation of analyte and internal standard were carried out using a reverse phase C18, column at 0.500 ml/min flow. The assay of doxycycline is linear over the range of 0.055-7.612 μg/ml, with a precision <14.83%, regression coefficient (r 2 ) ]=0.9961 and the limit of quantification in plasma for doxycycline was 0.055 μg/ml. Mean extraction recovery obtained was 95.55%. Samples are stable at room temperature for 6 h, processed samples were stable at least for 30.20 h and also stable at three freeze-thaw cycles. The method has been used to perform pharmacokinetic and bioequivalence studies in human plasma.

Very few HPLC [2-4], LC-MS methods [5] have been applied for the determination of doxycycline in plasma, and in other biological matters in different methods [6-12], but no method has been found and performed for doxycycline by LC-MS/MS in human plasma. Hence, the authors have proposed, developed and validated a simple, rapid, specific, sensitive LC-MS/MS method to determine doxycycline in human plasma.

The liquid chromatographic separations were carried out by using Cadenza CD-C18 (30×4.6 mm), 3μ column (Imtakt). Column temperature was held at 30°. The auto sampler tray temperature was 10°. The mobile phase is composed of 0.04% TFA in (methanol:acetonitrile:water (47.5:47.5:5)) v/v with flow rate of 0.500 ml/min. A typical injection volume of 2 μl is injected into the mass spectrometer for detection.

A 150.0 μl aliquot of plasma samples was mixed with 50.0 μl of internal standard working solution (30.0 μg/ml) and pretreatment is performed by adding 0.6 ml of potassium dihydrogen phosphate and vortexed to mix the samples for approximately 2 min and adopted the following SPE procedure. A commercially available cartridge (Analchem PLEXUS 30 mg/1cc cartridges) was utilized for extraction. After conditioning and equilibrating the cartridge with 1 ml of methanol and water, respectively, the drugs were extracted into the cartridge by loading the pre-treated plasma samples. Then the cartridges were washed using 2×1.0 ml of 5% methanol, in order to wash the unbound substance in the cartridge and reduce any interfering band in chromatograms. Finally the drug is eluted from the cartridge with 0.5 ml of mobile phase then subjected 2.0 μl samples for chromatographic analysis.

Evaluation of the matrix factor at low and high quality control concentrations were done to ensure that the precision, selectivity and sensitivity are not compromised due to a change in matrix. Matrix factor can be termed as the quantitative measurement of the matrix effect. Aqueous mixtures of internal standard and analyte at concentrations representing 100% extraction of internal standard and analyte at LQC and HQC concentrations were prepared. These shall serve as reference samples. Processed duplicate eight different lots of blank matrices (from eight individuals, including, one hemolyzed and one lipemic) [13] without addition of internal standard. Eluted solution volumes were equally diluted with reference sample; it is compared with respective aqueous reference sample equally diluted with mobile phase.

The eight point calibration curve was constructed by plotting, peak area ratio of doxycycline to their corresponding internal standard versus doxycycline concentrations. A linear regression with weighing factor of linear 1/x2 was applied.

Stability of both drugs in different matrices and under different conditions was evaluated. The detailed tests are described below. Stability was assessed by comparing the mean concentration of the stored QC samples with the mean concentration of freshly prepared QC samples. Drug stability in pooled human blank plasma is a function of the storage conditions, the chemical properties of the drug and the matrix effect. The following tests were performed to evaluate the stability, short term and long term stock solution stability, bench top stability, freeze and thaw stability, autosampler stability, wet extract stability, long term stability in matrix.

There was no significant interference observed during the retention time of analyte and internal standard while performing selectivity and specificity.

Observed RSD of matrix factor is 7.75% and 5.95% in LQC, 4.90% and 4.79% in HQC for doxycycline and internal standard, respectively. All eight matrix lots showed very similar matrix effect for both analyte and their corresponding internal standard.

An overall recovery of 95.54% for doxycycline, and 99.54% for demeclocycline were obtained. Both compounds show consistent recovery results for all three QC levels. Results are summarized in Table 3.

Table 3: Recovery of Analyte and Is

Stability of doxycycline in human plasma under different conditions was evaluated. The detailed results are shown in Table 4. As seen from the table, three freeze/thaw cycles, 6 h room temperature storage, 83 days storage at -70° and 28 h auto sampler stability has been established. In addition, 15 days stability for stock standard solutions and wet extract stability for 30.20 h were established. All of these demonstrate the ruggedness of the method.

During the method development the compounds to be quantified needs a better optimization starting from the selection of detector, mobile phase, column, extraction procedure and other chromatographic conditions.

Optimization of the detectors response is always detrimental factor in the quantification of analyte in a specific media. As the mass detectors are supposed to detect the monoisotopic mass of the charged species of the analyte, it is always necessary to tune the compound for proper identification of parent and daughter mass. 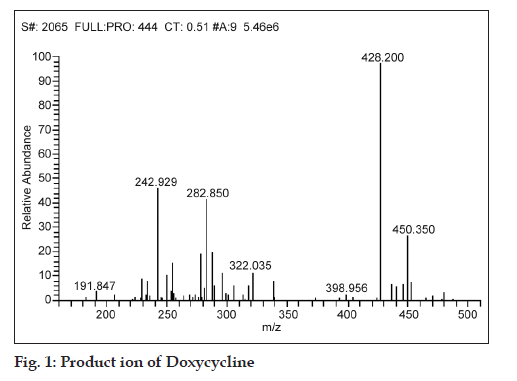 Literature sources have shown that any regular mobile phase will be sufficient for analysis [5,7]. But in practicality, it was learnt that doxycycline was not eluted completely out of the column with different proportions of the mobile phase as specified in the literatures. The base line noise was high and there was no peak observed in the chromatogram window. After trying with all the compositions, it was assumed that different organic modifiers are required apart from regular acidic and basic buffers used on LC-MS/MS. To clarify a HPLC system coupled with UV detector had been used to trouble shoot the problem. Finally, by using both formic acid and trifluoroacetic acid proper improvement in the chromatography has been observed. As trifluoroacetic acid is not a specified organic modifier that can be used in LC-MS/MS, very less amounts (0.04%) had been used to improve the peak shape. With this mobile phase was optimized.

The selection of the internal standard should be decided based on the physicochemical properties of the analyte. In most of the cases, the structural analogue of the analyte will be selected as an internal standard. Though there was a minor difference between the retention time of demeclocycline and doxycycline, matrix effect or ion suppression was not observed.

Trifluoroacetic acid being highly acidic normal columns cannot withstand that particular pH of the mobile phase. It was found that by using both formic acid and trifluoroacetic acid pH was around 1.9. As expected, normal reverse phase columns were unavailable to give proper reproducibility. Trifluoroacetic acid was causing ion suppression, which was undesirable. Even doxycycline was eluting in the void volume. Finally, problems like ion suppression, improper reproducibility, early elution has been eliminated by using Cadenza CD-C18 (30×4.6 mm), 3 μ column (Imtakt).

As a regular practice, protein precipitation has been employed. It was observed that there is matrix effect, ion suppression as well as very low extraction recovery. Due to the difference in the pKa of both drug and internal standard the plasma sample is pretreated with different acidic and basic conditions. It was observed that even protein precipitation or liquid-liquid extraction does not work. Even both liquid-liquid extraction and protein precipitation were used in combination which was not giving a desired result. Different makes of solid phase extraction cartridges (Oasis, Phenomenex, Orochem, Analchem) were used that employ different sorbent chemistries (both reverse phase cartridges and ionic i.e., weak anionic, strong anionic, weak cationic and strong cationic). Finally, it was observed that the matrix effect, recovery problems were being eliminated by using Analchem Plexus cartridges.

In addition to this several LC?MS methods have been reported for doxycycline quantification [5,7,9], where in chromatographic separation was carried out in long columns (100×4.6 mm, 5 μ) resulting in high retention times, thus long run times. As the short column has provided the desirable result during the optimization, the added advantage of low runtime was found to be credible apart from common benefits.

Owing to these disadvantages, authors propose a method developed with shorter run time for analysis. To reduce the run time, small column (30×4.6 mm) 3 μ was used and it was found that both drug and internal standard were resolved fine with a sharp peak shape (figs. 3 and 4). Extraction process is carried out by solid phase extraction (SPE) which is a powerful technique for rapid, selective sample preparation. The versatility of SPE allows it to be used for a variety of purposes, such as: purification, trace enrichment, solvent, desalting, derivatization, class fractionation.

The total run time to analyze a sample is 2.0 min, even can be analyzed with 1.5 min as run time as the retention time is 0.61 min for analyte and 0.62 min for internal standard. A simple chromatographic conditions and extraction techniques were adopted which has resulted in a simple, fast and rugged method for the determination for doxycycline to support BA-BE study in human plasma by LC-MS/ MS.

With all these final changes that were made to optimize mobile phase, column and extraction procedures, the major pitfalls of the development like ion suppression and matrix effect, peak shape irregularities etc., were eliminated. Recovery, sensitivity levels, precision and accuracy and chromatograms are found to be with in the acceptance limits.

We are thankful to Mrs. Gauri Sapte, Director, BBRC and the management of Maneesh Pharmaceuticals Ltd., for their valuable support and contribution in carrying out this research work with out which it will not be possible to publish the paper.