A novel, simple, sensitive, specific and rapid reverse-phase liquid chromatography-electrospray ionization-mass spectrometry method was established and validated for the ultra-trace analysis of efavirenz-related compound C, 8-hydroxy efavirenz and its impurity 1 which are potential genotoxic impurities associated with efavirenz. These were separated on high performance liquid chromatography and detected with tandem mass spectrometry in the positive ionization mode with MRM transitions, m/z 314.15>244.10, 212.10>57.10, 305.70>69.05 and 364.15>291.25. A gradient method was developed to separate the impurities using 0.01 M ammonium acetate buffer and methanol at 1 ml/min flow-rate. Samples were analyzed using a Hypersil C-18 column (5 µm, 250×4.6 mm). The calibration curves have shown good linearity in the concentration range of 2.5-78 ppb and a correlation coefficient of 0.99. Mean intra and inter day precision was 2.6-3.2 ppm and 2.5-2.6 ppm, respectively. For the 3 genotoxic impurities the limit of detection and limit of quantitation were 0.04 ppm and 0.125 ppm, respectively. The liquid chromatography-mass spectrometry/mass spectrometry method developed was specific, sensitive, precise and accurate. The developed method could be used for quantification and monitoring of genotoxic impurities of efavirenz.

Efavirenz (EFV, (S)-6-chloro-(cyclopropylethynyl)- 1,4-dihydro-4(trifluoromethyl)-2H-3,1-benzoxazin- 2-one) is an effective antihuman immunodeficiency virus type 1 agent that acts as a non-nucleoside reverse transcriptase inhibitor (NNRTI). Normally, NNRTI combination is the best suited for treating naive HIV patients. Some well-known NNRTI combinations are, combinations of EFV with antiretroviral (ARV) drugs like tenofovir, lamivudine, zidovudine and emtricitabine[1]. Furthermore, the mechanism of action of ARV drugs is by diffusion and circulation into the genital tract[2-4].

Pharmacopeia of Brazil, USA, British and Japan, indicated restrictions for active pharmaceutical ingredients (APIs) and formulations for allowable levels of impurities. Moreover, the Food and Drug Administration (FDA) and International Council for Harmonisation (ICH) mentioned strategies for the identification and quantification of impurities along with residual solvent in any in novel dosage forms[5-9]. Moreover, some impurities in trace levels could affect the efficacy and safety of API, as well as be carcinogenic[10,11]. Hence, monitoring and control of trace impurities in any API turn into a very tough assignment. Therefore, the process of minimizing such carcinogenic substances became important in pharmaceutical toxicology[12]. 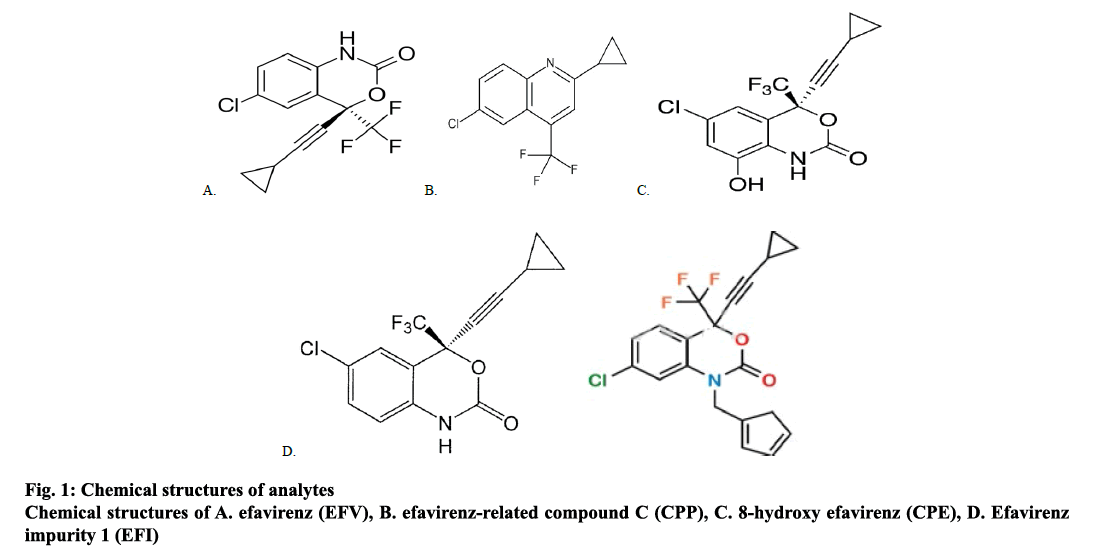 Generally, for any analysis, sample preparation plays an important role; it affects the sensitivity, as well as better recovery of impurities. So, preferable combinations of acetonitrile, water, ammonium acetate, and methanol were used as diluents for chromatographic efficiency. In the present work, 0.01 M ammonium acetate in methanol was chosen as a diluent with column oven at 40º due to good response and recovery for impurities CPE, CPP, and EFI. Also, both isocratic and gradient modes of elution were performed.

Nevertheless, from the observations, it was noticed that all the impurities were effectively separated by the gradient method. Similarly, a column of dimensions, namely Zorbax C8, Hypersil C18 column Phenomenox, Kromasil C8 and C18, were also investigated for resolutions. Finally, Hypersil C18 column was selected due to its better response, peak shape, linearity, and reproducibility even at a lower concentration. Moreover, the positive mode of ESI resulted in improved signal intensities and lesser noise background for impurities, when compared to negative mode.

Mobile phase A used was prepared by dissolving 0.77 g of ammonium acetate in 1000 ml Milli-Q water by sonication followed by filtration (0.22 μm). Pure HPLC grade methanol was used as a mobile phase B. An LC-MS/MS system, coupled with an 8050 triple quadrupole detector, was used. Separation was achieved on a 5 μm Hypersil C18 column (250×4.6 mm) with injection volume 10 μl, 1 ml/min flow rate, sample cooler temperature at 15° and column oven temperature 40°. Table 1 summarized conditions of MRM, Valco valve, and source gas parameters for mobile phases A and B under gradient mode against the blank solution (diluent). In order to safeguard the ESI sourced from high EFV concentrations, the valve ailment is kept under enabling transferral of eluent to unwanted.

Separately, 2.6 mg of CPE, CPP and EFI were weighed accurately and dissolved completely in 100 ml diluent via sonication. One milliliter of the above impurity/ intermediate standard stock solution was further diluted to 100 ml with diluent. One hundred milligrams of accurately weighed EFV was diluted to 5 ml. To evaluate the system suitability parameters, 10 μl of the above-prepared solution was separately injected namely blank, standard, and sample preparations and their peak area responses were monitored. As per the pharmacopeias, the average peak area response of % relative standard deviation (RSD) of CPE, CPP, and EFI impurities should not be more than 15.0.

Method was validated according to the USFDA and ICH guidelines. The appropriateness and efficacy of the chromatographic scheme were obtained from the system suitability test and it is proficient in the investigation without any bias. To guarantee the capacity of the chromatographic systems, these must placate pre-defined acceptance conditions to implement the examination of various samples. In the contemporary experiment, CPE, CPP, EFI impurity solutions were injected into the LC-MS/MS system for determining system suitability parameters such as peak area and its RSD and retention time, which were detailed after data incorporation using software (Table 2; fig. 2). 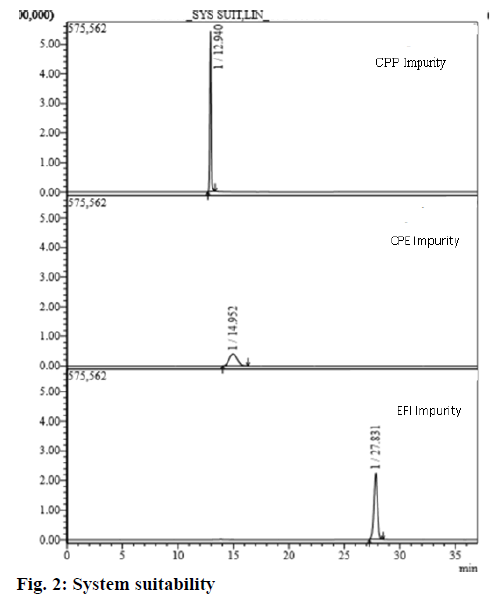 The CPE, CPP and EFI impurities were also checked for specificity by injecting them against the blank solution. The outcomes showed that the chosen method is unbiased concerning the presence of further components and interestingly, no nosiness was recorded at the RTs of CPE, CPP, and EFI impurities (Table 3 and fig. 3). 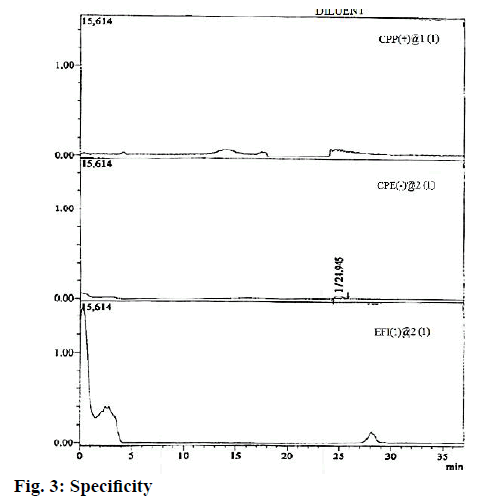 At limit of quantification (LOQ), 4 levels of the precision method, namely system precision, intermediate precision (ruggedness), method precision (repeatability) and precision were evaluated. System precision suggested inconsistency in the dimensions of the analytical system, while repeatability (method precision) indicated the reproducibility of the method. Standard solution was prepared with CPE, CPP, and EFI impurities and injected (n=6) into the LC-MS/MS system from which peak area and RSD were derived, whereas form method precision, the % RSD data was obtained (Table 4). The results of % RSD of CPE, CPP and EFI impurities were set up to be within the acceptance limits (Table 5).

Furthermore, to create an in lines connection amongst the concentration/quantity of analyte existing in the sample taken and to the detector response, a set of standards of calibration were equipped. Moreover, linearity was calculated by formulating 5 to 150 % of standard concentrations.

The peak area of each sample was noted and plotted against respective concentrations. The Eqn. y=mx+b, defined the linear relation between impurity concentration (x) and respective peak area (y). From this analysis, a correlation coefficient (must be above 0.99) and slope-intercept values were derived (Table 6). Hence, the coefficient for CPE, CPP and EFI impurity peak was found to be 0.99 each, which indicated good linearity (Table 6). Similarly, a signal-to-noise ratio for impurities of limit of detection (LOD) and LOQ were predictable at 3:1 and 10:1, respectively (Table 7). Also, Table 8 and 9 shows the % RSD values of impurities (n=6), and the RSD of peak areas, respectively. The S/N ratio for performing precision of LOQ and LOQ solutions (n=6) was found to be 10:1.

A novel LC-MS/MS method was established and validated for the ultra-trace-level identification of three PGI, namely CPE, CPP, and EFI in EFV. For this analysis, a switching valve was used not only to guard the ESI source but also to afford favorable analysis conditions. Furthermore, the MRM-mode method afforded good sensitivity and the LOD and LOQ values were measured to be minimal for all the 3 impurities. Based on the data of analysis, it could be justified that this method is validated completely with acceptable parameters like accuracy, linearity, and precision. Moreover, this method was also found to be simple and sensitive. Hence, this analytical method could be used as a tool for quality control, as well as checking of PGI in EFV.

The authors report no conflict of interest in this work.