Doxorubicin (DOX) is one of the most well‑known chemotherapy drugs used to treat a wide range of cancers [1]. However, the clinical utilization of DOX has been limited due to its variety of drawbacks including adverse side effects, poor selectivity, and accumulation in tumors, especially multi‑drug resistance (MDR) [2,3]. MDR is the most important form of drug resistance characterized by decreased cellular sensitivity and lowered drug intracellular concentration to a broad range of chemotherapeutic drugs [2,4,5]. In many MDR cell lines, the prototypic transporter responsible for this event has been identified as P‑glycoprotein, which is coded by the MDR1 gene and functions as an ATP‑dependent drug‑efflux membrane transporter that rapidly extrudes a variety of anticancer drugs (e.g., doxorubicin, daunorubicin, vinblastine, vincristine, paclitaxel and actinomycin D), and leads to reduce intracellular drug accumulation and decrease therapeutic efficacy [4,6]. To deal with this issue, a number of MDR reversal agents with P‑gp inhibitory activity, e.g., chemosensitizer and fatty acid ester surfactant [7], were identified. A non‑ionic surfactant called Solutol HS15, the main component of which is the polyethylene glycol 660 ester of 12‑hydroxy stearic acid, was also shown to overcome the multi‑drug resistance [8,9] and markedly improved the physical stability of the parenteral O/W emulsions [10].

In comparison to the chemosensitizers (e.g., cyclosporin‑A, verapamil) and the fatty acid ester surfactants (e.g. Cremophor‑EL, TritonX‑100, and Tween 80), the Solutol HS15 has more effective potency for reversing multi‑drug resistance in vitro and lower toxicity in vivo (8). Submicron emulsion (SE), as a novel drug delivery system, is a potent candidate in sustained‑release and targeted delivery systems [11]. However, SE has poor stability. Solutol HS15, as a co‑emulsifying excipient, can improve the stability of the emulsion droplets by enhancing the mechanical strength of the interfacial film formed around the oil droplets, and by electrostatic interactions which create an electrostatic barrier [10]. By taking advantage of the finding that the Solutol HS15, which overcomes MDR and enhances the stability of SE, we here investigated the in vitro cytotoxic activity of the Solutol HS15‑based Doxorubicin submicron emulsion (DOX‑SE) and the intracellular accumulation of drugs towards a multi‑drug resistant breast cancer cell lines, MCF‑7/ ADR cells.

Solutol HS15‑based doxorubicin submicron emulsion (DOX‑SE) was prepared based on the high‑pressure homogenization method [5]. The DOX base was obtained by reacting doxorubicin hydrochloride with the equivalent of 3 mol of triethylamine in chloroform overnight then used for the preparation of the drug‑loaded submicron emulsions. Briefly, 2 mg DOX, 8 mg α‑tocopherol, 200 mg soybean lecithin, 100 mg Solutol HS15 and 1000 mg soybean oil were dissolved in an appropriate volume of ethanol, followed by evaporation to remove the organic solvent as an oil phase. Seven milliliters double distilled water containing 20 mg Poloxamer 188 and 2.25 g were served as the aqueous phase. Both phases were heated separately to 50o, then the two phases were mixed and emulsified by a homogenizer at 12 000 rpm for 5 min. The pH of the crude emulsion was adjusted to 6.5 by citric acid (0.1 M), followed by an aliquot to 10 ml with double distilled water. The emulsion was then passed though Microfluidizer (M‑110L, Microfluidics, USA) at 10 000 PSI for 4 discrete volume cycles to produce a fine emulsion. The resulting emulsion was filtered through a membrane (0.45 μm) to obtain the final DOX‑SE formulation. The particle size, polydispersity index and zeta potential were measured using a Malvern Zetasizer Nano‑ZS90 (Malvern instruments, UK). The pH value of DOX‑SE was determined by using a pH meter at room temperature. The DOX was also measured by a HPLC method.

The dialysis units with molecular‑weight cut‑off 2000 Da were used to carry out the drug release experiments. Phosphate buffered saline (PBS, pH=7.4) was used as the drug release media. The sample DOX‑SE or DOX solution (0.5 ml) was put into the dialysis units. The sealed dialysis units were put into float floating on surface of 500 ml release media (to maintain the sink condition) in beaker. These release medium was stirred at a speed of 200 rpm at 37o under a light‑sealed condition. At certain time intervals, 10 μl DOX‑SE or DOX solution was taken out from dialysis unit for measuring the non‑released drug concentrations by the microplate reader.

In vitro dose‑dependent antitumor activity of free DOX, DOX with 10 μM verapamil and DOX‑SE against MCF‑7/ADR cells was evaluated by sulforhodamine B (SRB) cell cytotoxicity assay (G‑Biosciences, St Louis, MO, USA). Cells were cultured in Dulbecco modified Eagle medium supplemented with 10% fetal bovine serum at 37° with 5% CO2. Cells were seeded in 96‑well plates at the density of 5×103 cells/well and incubated for 24 h to allow cell attachment. The cells were incubated with DOX‑SE or free DOX at equivalent drug concentrations ranging from 2 μM to 100 μM for 48 h. At the end of the experiment, SRB assay was performed according to the manufacturer’s instructions [12]. The absorbance was measured at 565 nm using a microplate reader. The IC50 value was calculated by SPSS software using nonlinear regression analysis. The inhibition rate of cell proliferation was calculated according to the equation below. A culture medium without drug was used as the blank control. Cell proliferation inhibition rate (%)=(Acontrol-Adrug)/Acontrol×100, where Adrug is the absorbance of the experimental group; Acontrol is the absorbance of the control group.

Confocal laser scanning microscopy (CLSM, Olympus FV1000) further confirmed the cellular uptake of DOX‑SE. MCF‑7/ADR cells were plated at a density of 1×105 cells/well with 22 mm sterile cover slips for 24 h. Free DOX and DOX‑SE with equivalent DOX concentration (5 μM) were incubated for 4 h and then the cells were washed three times with PBS and fixed with 3.7% formaldehyde in PBS. Vectashield was dropped on slides to seal the cell samples after the cells were washed 3 times with PBS. The stained coverslips were imaged using the CLSM.

For flow cytofluorometry study, MCF‑7/ADR cells were seeded at a density of 5×105 cells/well in 6‑well plates and incubated as described above. After removal of the medium, the cells were washed three times with cold PBS, and harvested by the use of trypsin solution and gently suspended in 2 ml fresh medium. The uptake efficiency of the cells was analyzed by flow cytometry (Becton Dickinson, Sunnyvale, CA) with CellQuest software within 1 h.

Apoptotic cells were determined by dual staining with an Annexin V and propidium iodide kit (Invitrogen, CA, USA). In brief, MCF‑7/ADR cells were seeded into six well culture plates at a concentration of 1×106 cells/well and incubated for 24 h to allow cell attachment. The cells were pretreated with DOX‑SE or DOX at equivalent drug concentrations (10 μM) for 48 h and collected by trypsinization using 0.125% of Trypsin solution. After that, the cells were washed twice with PBS (pH=7.4) and resuspended in 100 μl binding buffer at a density of 1×106/ml. 2 μl of annexin V‑FITC was added and cells were incubated at room temperature for 15 min in darkness. Then the propidium iodide (PI) stock solution (2 μl, 750 μM) was added and cells were incubated for another 5 min in the darkness. The cells were analyzed by flow cytometry with CellQuest software within 1 h. The numbers of cells undergoing necrosis (positive for propidium iodide), early apoptosis (positive for Annexin V) and late apoptosis (double‑positive for Annexin V and propidiumiodide) stages of apoptosis were quantified using flowcytometry.

The particle size, zeta potential, polydispersity index, pH values, DOX content and physical appearance of DOX‑SE are given in Table 1. As expected, the microfluidizer produced smaller droplets of oil dispersed in water. The mean drug loading of DOX‑SE was 201 μg/ml and no crystal was subsequently detected by optical microscope at this loading level. The general physico‑chemical properties of DOX‑SE were not significantly affected after autoclaving (115°, 30 min). Regarding the long‑term stability the negative zeta potential of a stable O/W emulsion should not fall below 30 mV. The negative zeta potentials of the droplets of DOX‑SE before and after autoclaving were well above this critical value, the results indicated DOX‑SE may be stable for a long period of time.

The in vitro drug release is investigated to quantify the cumulative percentage of released DOX from DOX‑SE, see fig. 1. It was found that DOX release rate of DOX‑SE was slower than that of DOX solution. The cumulated release ratio of DOX solution was up to 96.57% within 0.5 h while that of DOX‑SE was 7.05%. The release curves of DOX‑SE exhibited a typical biphasic pattern including an initial burst release in the first 8 h and following sustained and slow release for a prolonged time. This burst release behavior might be due to DOX existed in the O/W interface of DOX‑SE, whereas the sustained and slow release of DOX was mostly driven by diffusion from oily phase to the O/W interface. 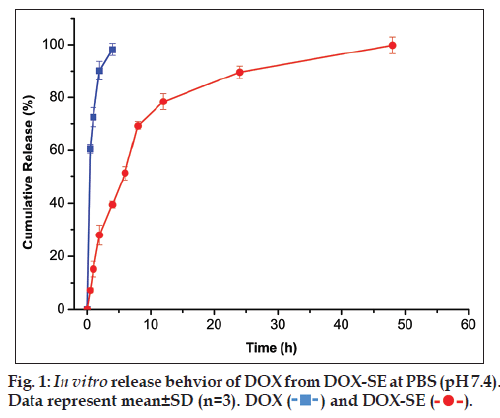 The cytotoxic activity of DOX‑SE was concentration dependent in MCF‑7/ADR cells. As can be seen from fig. 2, the inhibition rates of DOX‑SE were 56.3 and 89.6% against MCF‑7/ADR with 5 and 50 μM of DOX, respectively. However, the inhibition rates of free DOX were no more than 15 and 30% at the same DOX concentration. The inhibition rates of DOX‑SE were significantly higher than those of DOX with 10 μM verapamil (P<0.01), although addition of verapamil enhanced the antiproliferativeactivity of DOX. The IC50 values of free DOX, DOX with 10 μM verapamil and DOX‑SE were 74.5±3.2 μM, 12.3.5±2.4 μM and 4.6±0.3 μM, respectively. Treatment with DOX‑SE had significant antiproliferative activity and low IC50 value, suggesting that DOX‑SE may overcome drug resistance of MCF‑7/ADR cells. 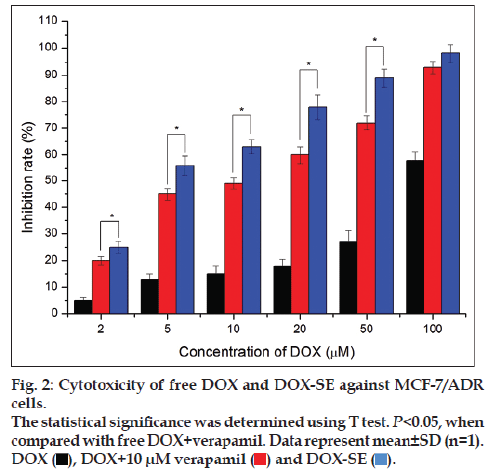 Confocal laser scanning microscopy and flow cytofluorometry were performed to investigate the cellular accumulation of DOX after incubation for 4 h, see fig. 3. After these relatively short incubation times, the levels of intracellular DOX appear to be higher in the case of SE than free DOX. This observation indicates that the cellular accumulation is higher for DOX bound to SE compared to the free DOX. 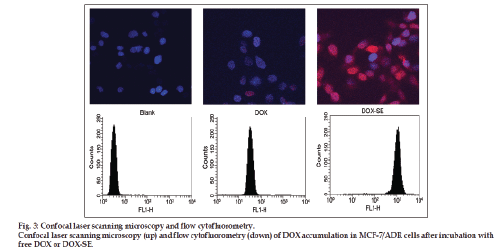 These results may be correlated to DOX‑SE inhibitory effects on efflux pumps, which would be partially direct, through the progressive release of intracellular free Solutol HS15 that interacts with MDR efflux pumps and reduce their activity [9]. These findings indicate that the Solutol HS15‑based Doxorubicin submicron emulsion represents an efficient delivery system for DOX internalization to lead MCF‑7/ADR cells to death at lower concentrations than what is needed for free DOX.