A Preliminary Cytotoxic Study on the Zinc Complexes of Flavonols

A series of newer flavonols and their zinc complexes were synthesized and characterized by infrared, proton nuclear magnetic resonance, and mass spectrometry. The lipophilicity for the test compounds was determined by carrying out partition coefficient using n-octanol-water system. Evaluation of the oxidation potential for the test compounds was performed by cyclic voltammetry. Further, all the test compounds were screened for their anticancer activity against Vero and MCF-7 cell lines using quercetin as standard. Compound F4, a 2-hydroxy-3-(4-methylsulphanyl-phenyl)-4H-naphthalen-1-one was synthesized by using 4-(methylthio) benzaldehyde, exhibited an oxidation potential at 0.641V and 0.928V, while its zinc complex, F4M1 showed an oxidation potential at 0.59 V and 0.96 V along with their log p values at 2.71 and 3.9 respectively. Amongst the ten compounds tested for their cytotoxicity on MCF-7 cell lines, compound F4 exhibited cytotoxicity at 31.43 µM as compared with that of the standard quercetin with its IC50 at 26.5 µM. Thus, from our study it was found that, test compound F4 could become the promising anticancer molecule.

Cancer is a complex disease and is a major health concern across the globe. Though, established treatment regime are available for treating cancer using chemotherapeutics agents, the toxicity associated with them has urged the need for the development of new anticancer agents [1]. The polyphenols, flavonoids and their synthetic analogues have been widely used in the treatment of ovarian, breast, cervical, pancreatic and prostate cancer [2]. A large number of epidemiological studies propose that high flavonoid consumption may be correlated with a reduction in the risk of cancer [3]. Hirano et al. [4] tested anticancer efficacy of 28 flavonoids on human acute myeloid leukemia cell line (HL-60), where, eight flavonoids showed considerable suppressive effects. Whereas, Kuntz et al. [5] studied more than 30 flavonoids for their effects on cell proliferation and potential cytotoxicity in human colon cancer cell lines both in Caco-2 and HT- 29 and found that, almost all the compounds exhibited antiproliferative activity without any cytotoxic effects. However, they could not correlate the antiproliferative effects with respect to their structure.

Metal complexes of chelating ligands have attracted considerable attention owing to their interesting physicochemical properties, diversified biological activities and as specific models of metallo-enzyme active sites [6,7]. Flavonoids are found to be promising metal chelators [8] with the coordination sites between the 5-hydroxy group of A ring and 4-carbonyl group of C ring and as well as 3-hydroxy and 4-carbonyl group of C ring. This work was supported based on the report that metal chelation could enhance the biological activity [9].

The new drug discovery of anticancer agents as metal complexes is quite a challenging task where, emphasis is made to synthesize metal complexes that are able to cleave both strands of DNA molecule [10]. A transition metal complex of flavone, namely, copper (II) complexes of trans-bis (3-aminoflavone-kappa 2N, O) bis (perchlorato-kappa O) copper (II), exhibiting potent antitumor activity was also reported by Rybarczyk-Pirek et al. [11]. Based on these reports, we have undertaken the synthesis and characterization of series of flavones and their zinc complexes and carried out the evaluation of their cytotoxicity on Vero and MCF-7 cell lines using 3-(4,5-dimethylthiazol-2-yl)- 2,5-diphenyltetrazolium bromide (MTT) assay. Vero cells are normal monkey kidney epithelial cells. They are normally used when new compounds are tested for anticancer activity to negotiate the cytotoxic actions on normal cells. MCF-7 cells are highly metastatic human breast cancer cells. These cells can be cultured and sub-cultured, which can be used to screen anticancer activity.

Conventionally, chalcones are prepared by Claisen- Schmidt condensation where, equimolar concentrations of aryl aldehydes are condensed with acetophenones in the presence of a base [12]. In the present work, a solution of 0.001 mol of 2-hydroxyacetophenone in 15 ml of methanol was thoroughly stirred with 2 ml of 20% alcoholic solution of sodium hydroxide. After stirring the reaction mixture for 30 min, 0.001 mol of substituted benzaldehyde was added in portions. Stirring was continued until the completion of the reaction. The reaction mixture was then suspended in ice cold water and the resulting solution was acidified with dilute hydrochloric acid. The product precipitated was collected by filtration and dried in air and stored in a desiccator.

To a solution of 0.005 mol of chalcone in 20 ml of methanol, 5 ml of 20% alcoholic sodium hydroxide was added and stirred. To this mixture, 3 ml of 30% hydrogen peroxide was added in portions with constant stirring. The stirring was continued till the completion of the reaction. The mixture was then suspended in ice cold water and was acidified with dilute hydrochloric acid to obtain product as precipitate. The product was then collected by filtration, washed with water, dried and was further purified by recrystallization using solvents such as ethanol (90%) and methanol (100%). The progress of the reactions was monitored by TLC using n-hexane:ethylacetate (7:3) as solvent system. The spots were observed under UV chamber.

A solution of flavone was prepared by heating 0.001 mol of the flavone in methanol by heating and to this to the hot solution, 0.001 mol of the anhydrous zinc chloride was added with constant stirring. Stirring was continued till the complex got precipitated and the precipitated complex was kept aside for the evaporation of the solvent, washed with water, dried and stored in a desiccator. Figure 1, represents the scheme followed for the synthesis. In the present study, shake flask method [13] was employed to determine partition coefficient using n-octanol and water system. 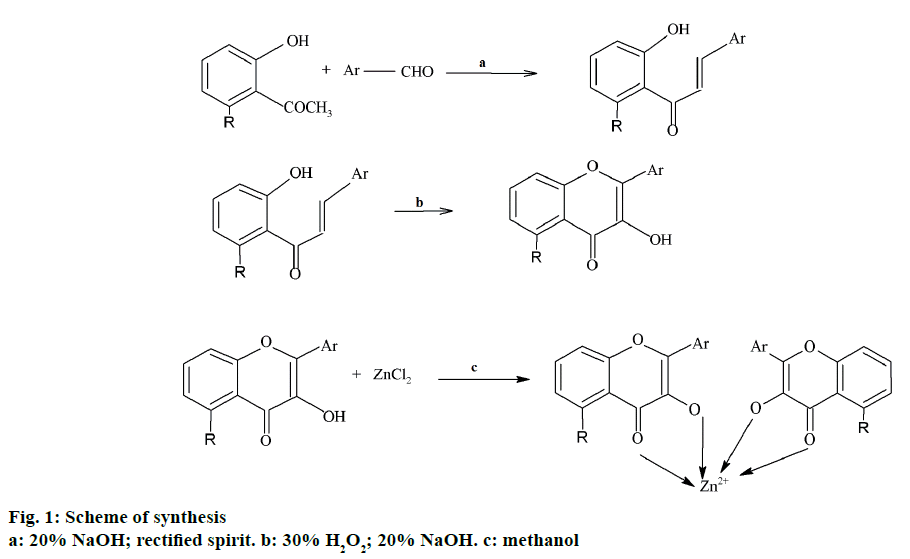 William et al. [14] reported that the electrochemical properties of the flavonoids might influence their biological activities. To support this, Aleksandra et al. [15] and Jesús et al. [16] compared their antioxidant activity with redox potential values.

Redox potentials of the test compounds were determined by using platinum wire and Ag/AgCl as auxiliary and reference electrodes, respectively. Glassy carbon electrode was used as working electrode and tetrabutylammonium perchlorate, 100 μM in DMSO was used as supporting electrolyte. Solutions for cyclic voltammetry were prepared by dissolving 1 mg of the test compounds in 1 ml of dimethyl sulfoxide (DMSO) and these stock solutions were further diluted to get a concentration of 10 μg×ml-1 of the supporting electrolyte solution. Cyclic voltammograms were obtained at a scan rate of 50 mVs-1 in the potential interval of −0.5 to +1.5 V versus Ag/AgCl.

Cytotoxicity screening for all the test compounds was performed by determining the cell viability using MTT assay [17] in different cell lines namely MCF-7 and Vero using quercetin as standard. Quercetin is 3,3′,4′,5,7- pentahydroxy-flavone and is one of the most abundant flavonoids found in fruits and vegetables. It has been reported to exhibit anticancer and antiinflammatory effects [18-20].

Cells were routinely grown in the 25 cm2 culture flasks with perforated screw-caps containing DMEM supplemented with 8% FBS and 50 μg×ml-1 gentamycin sulfate at 37° with 5% carbon dioxide (CO2) humidified air in the CO2 incubator. A known number of cells (5×103 cells/100 μl of medium in a well) were seeded in 96 well plates and incubated for 24 h for attachment. Desired concentrations of sample were prepared in 0.1% (v/v) DMSO in the media prior to the experiment. The reactant mixtures were diluted with media and cells were treated with different concentration ranges of the drug (25-200 μM). In control samples, equivalent amount of DMSO was maintained to determine its cytotoxic effect. After 48 h, the media was removed and the cells were incubated with 100 μl MTT reagent (1 mg×ml-1, in phosphate buffer) for 4 h at 37°, the yellow formazan so produced was then solubilised and converted to purple complex by the addition of 100 μl DMSO. The suspension was placed on a microvibrator for 5 min, absorbance was recorded at 540 nm by ELISA reader and the percentage cytotoxicity was calculated from the determination of cell viability. 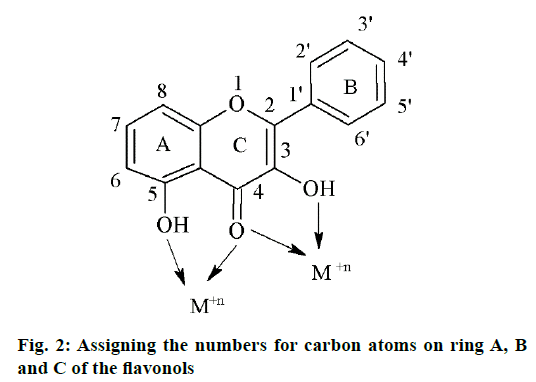 Figure 2: Assigning the numbers for carbon atoms on ring A, B and C of the flavonols

Partition coefficient (log P) is one of the important physical parameters used in the structure-activity relationship studies. It is measured in terms of the log P values, higher the log P value greater will be the lipophilicity and vice versa. The experimental log P values of flavonols F1-F5, were found to be in the range of 1.59, 3.6, 2.47, 2.71 and 2.9 respectively, which is in agreement with the predicted log P values. The corresponding zinc complexes of the synthesized flavonols exhibited values in the range of 2.51, 4.9, 3.8, 3.9, and 4.2, respectively. An increase in its value was observed upon complexation of the ligands.

Amongst the ten compounds tested for their cytotoxicity, compound F4 exhibited cytotoxicity at 31.43 µM as compared with that of the standard quercetin with its IC50 at 26.5 µM

Table 2: Cytotoxicity of the compounds

A series of flavones and their zinc complexes were synthesized and characterized using spectral data and were found to be in accordance with their proposed structures. Their oxidation potentials were determined by cyclic voltammetric methods. Further, they were evaluated for their cytotoxic efficacy by MTT assay using Vero and MCF-7 cell lines and compound F4 and its zinc complex were found be exhibiting cytotoxicity against MCF-7 cell lines and their IC50 values are comparable with quercetin.