A simple, selective, rapid, precise and economical reverse phase HPLC method has been developed for the simultaneous estimation of paracetamol and aceclofenac from pharmaceutical dosage forms. The method was carried out on a Hichrom C18 (25 cm×4.6 mm i.d., 5 µ) column with a mobile phase consisting of acetonitrile:20 mM phosphate buffer (pH 5.0) (60:40 v/v) at a flow rate of 0.8 ml/min. Detection was carried out at 265 nm. Etoricoxib was used as an internal standard. The retention time of paracetamol, aceclofenac and etoricoxib was 4.75, 6.44 and 8.83 min, respectively. The developed method was validated in terms of accuracy, precision, linearity, limit of detection, limit of quantitation and solution stability. The proposed method can be used for the estimation of these drugs in combined dosage forms.

Aceclofenac, chemically [[2-(2',6-dichlorophenyl) amino] phenylacetoxyacetic acid], is a phenylacetic acid derivative with potent analgesic and antiinflammatory properties and an improved gastrointestinal tolerance. Paracetamol is chemically N-(4-hydroxyphenyl) acetamide. It is used as an analgesic and antipyretic. Many methods have been described in the literature for the determination of aceclofenac and paracetamol individually and in combination with other drugs [1-11]. However, there is no HPLC method reported for the simultaneous estimation of these drugs in combined dosage forms. Fixed dose combination containing paracetamol (500 mg) and aceclofenac (20 mg) is available in the tablet form in the market. The aim of this work was to develop an RP-HPLC method with ultraviolet detection for the simultaneous determination of paracetamol and aceclofenac in pharmaceutical dosage forms. The present RP-HPLC method was validated following the ICH guidelines [12,13].

The mobile phase prepared is a mixture of acetonitrile and 20 mM phosphate buffer (pH 5.0 adjusted with orthophosphoric acid) (60:40 v/v). It was filtered through a
0.2 μ membrane filter and degassed. Standard stock solutions of 1 mg/ml of paracetamol, aceclofenac and etoricoxib were prepared separately using a mixture of water and acetonitrile in the ratio 1:1 v/v. From the standard stock solution, mixed standard solution was prepared to contain 50 μg/ml of paracetamol, 2 μg/ml of aceclofenac and 100 μg/ml of etoricoxib as internal standard. The mobile phase was delivered at a flow rate of 0.8 ml/min with detection at 265 nm. The injection volume was 50 μl; Analysis was performed at ambient temperature.

Twenty tablets, each containing 500 mg of paracetamol and 20 mg of aceclofenac (Olfenac-P, Olcare Pharmaceuticals, Gujarat) were weighed and finely powdered; a quantity of powder equivalent to 50 mg of paracetamol and 2 mg of aceclofenac was weighed and transferred to a sintered glass crucible. To this 10 ml of 1 mg/ml solution of etoricoxib was added and the drugs were extracted with three quantities, each of 20 ml of mixture of acetonitrile and water (1:1 v/v). The combined extracts were made up to 100 ml with mobile phase and further dilutions were made to get a concentration of 50 μg/ml of paracetamol, 2 μg/ml of aceclofenac (theoretical value) and 100 μg/ml of etoricoxib as internal standard and this solution was used for the estimation.

With the optimized chromatographic conditions, a steady baseline was recorded, the mixed standard solution was injected and the chromatogram was recorded. The retention time of paracetamol, aceclofenac and etoricoxib was found to be 4.75, 6.44 and 8.83 min, respectively. This procedure was repeated for the sample solution obtained from the formulation. The response factor (peak area ratio of standard peak area and internal standard peak area) of the standard solution and sample solution were calculated. The concentration of the drugs were calculated (Table 1) using following formula, concentration of drugs= (response factor of the sample/response factor of the standard)× concentration of standard.

Table 1: Results of analysis of formulation and recovery studies

A typical chromatogram of sample solution is given in fig. 1. Detection was done at 265 nm. The peak area ratio of standard and sample solutions was calculated. The assay procedure was repeated for six times and mean peak area ratio and mean weight of standard drugs were calculated. The percentage of individual drugs found in formulation, mean, standard deviation in formulation were calculated and presented in Table 1. The results of analysis shows that the amount of drugs was in good agreement with the label claim of the formulation. 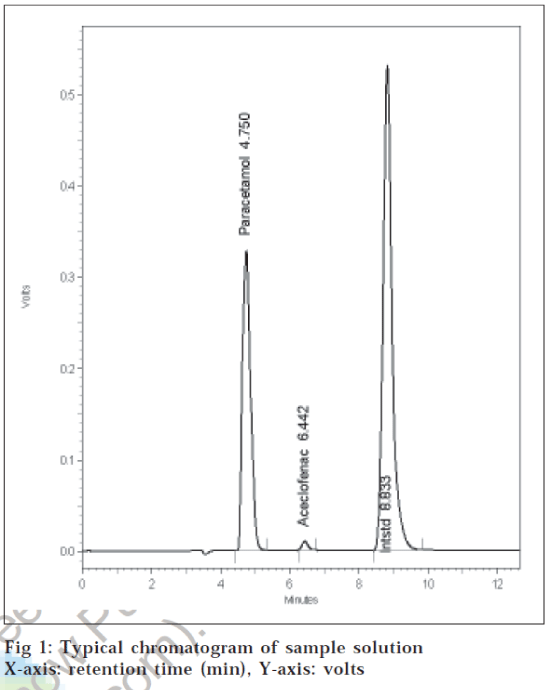 The linearity of the method was determined at seven concentration levels ranging from 20 to 80 μg/ml for paracetamol and 0.5 to 3.5 μg/ml for aceclofenac. The calibration curve was constructed by plotting response factor against concentration of drugs. The slope and intercept value for calibration curve was y =0.0072x-0.001 (R2=0.998) for paracetamol and y=0.0252x +0.003 (R2=0.996) for aceclofenac. The results show that an excellent correlation exists between response factor and concentration of drugs within the concentration range indicated above.

The ruggedness of the method was determined by carrying out the experiment on different instruments like Shimadzu HPLC (LC-10AT), Agilent HPLC and Water’s Breeze HPLC by different operators using different columns of similar type like Hypersil C18, Phenomenex LUNA C18 and Hichrom C18. Robustness of the method was determined by making slight changes in the chromatographic conditions. No marked changes in the chromatograms demonstrated that the HPLC method developed are rugged and robust.

In order to demonstrate the stability of both standard and sample solutions during analysis, both solutions were analyzed over a period of 5 h at room temperature. The results show that for both solutions, the retention time and peak area of paracetamol and aceclofenac remained almost unchanged (% RSD. less than 2.0) and no significant degradation within the indicated period, thus indicated that both solutions were stable for at least 5 h, which was sufficient to complete the whole analytical process.

The System suitability studies were carried out to determine theoretical plate/meter, resolution factor, asymmetric factor and tailing factor. The results were given in the Table 2. The values obtained demonstrated the suitability of the system for the analysis of this drug combinations, system suitability parameters may fall within ±3% standard deviation range during routine performance of the method.

Thus the proposed RP-HPLC method for the simultaneous estimation of paracetamol and aceclofenac in combined dosage forms is accurate, precise, linear, rugged, robust, simple and rapid. Hence the present RP-HPLC method is suitable for the quality control of the raw materials, formulations and dissolution studies.

The authors thank M/s. Aristo pharmaceuticals, Mumbai for providing gift samples of aceclofenac and paracetamol and M/s. Cadila Pharmaceuticals Ltd., Ahmedabad for providing a gift sample of etoricoxib. The author’s are grateful to His Holiness Jagadguru Sri Sri Shivarathree Deshikendra Mahaswamigalavaru of Sri Suttur Mutt, Mysore for providing facilities to carry out this work.