Over the past two decades, non-steroidal antiinflammatory drugs (NSAIDs) have played a central role in the treatment of pain and inflammation. NSAIDs are the largest single group of drugs used globally, constituting more than 20 % of all prescriptions [1]. It is found that more than thirty million individuals consume NSAIDs daily. Around 400 formulations of NSAIDs are marketed in India, resulting in widespread exposure of patients to this class of drugs and its adverse effects [2]. For all the above reasons, studies evaluating the pattern of prescriptions of NSAIDs are very important.

The cyclooxygenase-2 (COX-2) enzyme helps in controlling gastric mucus production, the water excretion from the kidney. It also induces platelet formation and is involved in producing prostaglandins for inflammatory response. Though there is wide clinical use of traditional NSAIDs as analgesics, anti-pyretic and anti-inflammatory agents, their gastro-intestinal toxicity is a major clinical constraint. Subsequently, selective COX-2 inhibitors have emerged as potentially gastro-friendly NSAIDs and it is believed that sufficient therapeutic benefits are achieved by selective COX-2 inhibition [3,4].

Rational drug prescribing has been the subject of several studies [5]. The World Health Organization (WHO) compiled a set of core drug use indicators that are useful for studying the prescribing patterns of drugs in healthcare settings [6,7]. Prescriptions can be used as authorised documents prescribed by a physician and the dispensing pharmacist are responsible for any misconduct in prescribing or dispensing. NSAIDs, including both traditional nonselective NSAIDs and selective COX-2 inhibitors, are among the most widely used drugs for the management of pain. Both prescription and over-the-counter NSAIDs are widely used for their anti-inflammatory and analgesic effects. NSAIDs are the essential choice in pain management because of the combined role of the COX pathway in inflammation [8].

A previous study conducted in Aden in Yemen revealed that non-selective NSAIDs were the most commonly prescribed, with diclofenac sodium being the most frequently prescribed (26.6 %), followed by meloxicam (12.8 %) and ibuprofen the least common (12 %). A combination of two non-selective NSAIDs was also reported. Selective COX-2 inhibitors were much less commonly used. This class of drug was mainly prescribed for infective conditions (29.3 %), fever (9.3 %), orthopaedic pain (8.1 %) and musculoskeletal pain (7.8 %). In general, the study concluded that there was irrational use of NSAIDs and deviation from the WHO standards regarding NSAIDs, with a high rate of NSAID prescription and low practice of prescribing drugs by generic names [9].

Similarly, an Iranian study found that the most prescribed NSAIDs was diclofenac (49.21 %), followed by ibuprofen (28.6 %) and naproxen (8 %). Prescribing two NSAIDs simultaneously was reported in 7 % of the prescriptions. General Doctors tend to prescribe NSAIDs more frequently than specialists- (67 %) and (33 %) respectively. The study reported irrational prescribing patterns in coadministration of NSAIDs and gastroprotective agents as well as NSAID combinations [10].

Another study conducted in Nigeria showed that the most commonly prescribed medicine is Aspirin (62.2 %) followed by Diclofenac potassium (13.7 %), while Tenoxicam and Piroxicam were the least prescribed (0.1 %). In contrast to the previous study, this study showed compliance with the WHO’s standards regarding prescribing patterns [11].

Rational use of drugs is essential and it has global importance. Rational drug prescribing can be defined as appropriate drugs prescribed in the right dose, at correct time intervals and for a sufficient duration. Irrational drug use is a common problem in many countries of the world. Therefore, periodic evaluation of drug utilisation patterns needs to be done to enable suitable modifications in the prescription of drugs to increase the therapeutic benefit and decrease the adverse effects in accordance with World Health Organization (WHO) drug use indicators [12]. The purpose of a drug utilisation study is to provide feedback to the prescriber and to create awareness about the rational use of medicines [13]. Hence, this study aimed to evaluate the use and prescribing pattern of NSAIDs in tertiary care teaching hospitals.

This study used a prospective cross-sectional design, which was carried out in the orthopaedic out-patient department of a tertiary care teaching hospital, Tamilnadu in India, between the February and December 2017.

A total of 1695 patients visited the orthopaedic department during the study period. Out of 1695, only 1480 patients were prescribed NASIDs.

The sample size was based on the number of patients visiting the out-patient orthopaedic department (1695) and determined by using a Raosoft sample size calculator (http://www.raosof.com/samplesize. html) with a predetermined margin of error of 5 % and a confidence level of 95 % [14]. In order to minimise erroneous findings and to increase study reliability, the target sample size was set at 314 participants. The number was increased to 500 patients. The institutional ethical committee approved the study. A non-random sampling procedure–i.e. a convenience sampling–was followed, as selecting a truly random sample was not possible due to the unfeasibility of constructing a sampling frame.

After obtaining their informed consent, patients of both genders who were prescribed at least one NSAID during the study period. Patients with severe psychiatric disorders, terminal illness and inpatients of any department were excluded from the study.

Patient data were collected through data collection forms which consisted of details including the following: age, sex and drug therapy. Additional information was collected from patients’ medical records after a direct interview with the patients. The collected data was evaluated for the WHO’s prescribing indicators, indication for prescribing NSAIDs and comparison of selective and non-selective NSAIDs.

The collected data were cleared, entered and analysed using the Statistical Package for Social Sciences (SPSS) version 24.0 for the windows. Chi-Square test was used to compare the difference between the two groups. A p value of <0.05 was considered significant. Results were described in terms of frequencies. Collected data was analysed by descriptive statistics.

This study set out with the aim of assessing the use and prescribing pattern of NSAIDs in a tertiary care teaching hospital. Out of 1695 who visited the orthopaedic department during the study period, 1480 patients were prescribed NASIDs and 500 patients were enrolled for this study. Out of 500 prescriptions included in the study, the total number of drugs prescribed was 1098, among them 688 NSAIDs. Among the 500 patients, 234 (46.8 %) were male and 266 (53.2 %) were female. The age and gender distribution of the pattern of NSAIDs prescribing is presented in Table 1. About 8.8 % (44) and 4.8 % (24) the patients were smokers and drank alcohol, respectively. The youngest age for which Diclofenac and Ibuprofen was prescribed was 17 y old and this was 22 y for Aspirin. Results showed significant differences (p<0.0001) in the frequency of NSAID prescribing according to age groups utilising the Chi-Square test. Diclofenac 148 (21.51 %) and Aceclofenac 104 (15.11%) were prescribed mostly for the adult age group, Aspirin was prescribed only to the adult age group, while Ibuprofen derivatives were prescribed mainly for adults 48 (6.97 %) and to a much lesser extent to children less than 18 y of age (2.32 %). There were no differences (p=0.193) in the pattern of prescriptions according to gender.

Table 1: Prescribing Frequencies Of Non-Steroidal Inflammatory Drugs According to the Age Group and Sex of the Patients 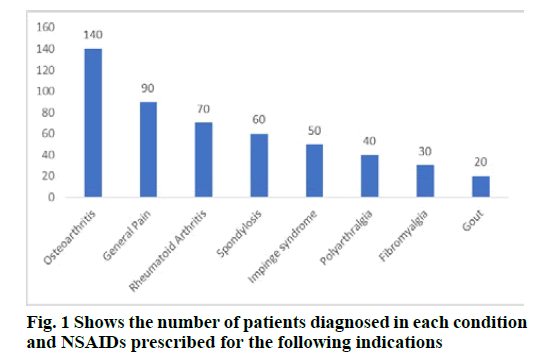 Figure 1: Shows the number of patients diagnosed in each condition and NSAIDs prescribed for the following indications

The current study concludes that, among COX-1 inhibitors, Diclofenac was the most commonly prescribed NSAIDs from NLEM, and Etoricoxib was found to be the most commonly prescribed among COX- 2 inhibitors. The percentage of analgesics prescribed by generic name was appropriate, but the average number of drugs per prescription deviated from the WHO’s rational drug use indicator. The use of gastro protective agents along with NSAIDs needs to be rationalised.

A limitation of this study is that the sample was selected using a non-random sampling method, and this may have resulted in a biased sample as the intended population did not have equal sampling probability. Therefore, the study finding cannot be extrapolated to all patients prescribed NSAIDs.

This work is supported by the Dean of Scientific Research at King Khalid University, Abha, Kingdom of Saudi Arabia for the financial support is greatly appreciated for the general research project under grant number GRP/339/42, awarded to Geetha Kandasamy.

We would like to thank all the staff members of the orthopaedic department of the tertiary care teaching hospital for their support throughout the study. The authors thank the Deanship of Scientific Research at King Khalid University for providing adequate support.