A simple, selective, rapid, precise and economical reverse-phase high-performance liquid chromatography method has been developed for the determination of lapatinib in tablet using gemcitabine hydrochloride as an internal standard. Chromatography was carried out on an ODS C-18 RP column (4.6 mm i.d. ×250 mm) using a mixture of acetonitrile and water (50:50 v/v) as the mobile phase at a flow rate of 1.0 ml/min. The drug was monitored at 232 nm. The retention times for lapatinib and gemcitabine hydrochloride were found to be 4.25±0.05 and 6.10±0.05 min, respectively. The method produced linear responses in the concentration range of 2-60 μg/ml of lapatinib. The limit of detection and limit of quantitation were 0.265 and 0.884 μg/ml, respectively.

Lapatinib is a small molecule kinase inhibitor and derivative of 4-anilinoquinoline [1]. Lapatinib was approved by the US Food and Drug Administration on March 13, 2007 [2]. Its molecular formula is C29H26ClFN4O4S and chemically it is N- [3-chloro-4- [(3-fluorophenyl) methoxy] phenyl]-6- [5- [(2-methylsulfonylethylamino) methyl]-2-furyl] quinazolin-4-amine [3] (fig. 1). It is commonly prescribed for the treatment of breast cancer and other solid tumours. It reversibly inhibits ErbB1 and ErbB2 tyrosine kinases leading to inhibition of MAPK and PI3K signalling pathways [4,5]. 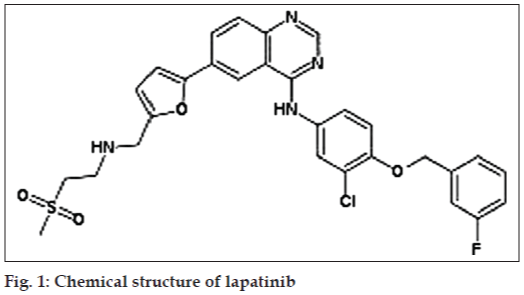 The mobile phase was filtered through 0.45 μm membrane filter and then used. The flow rate of the mobile phase was maintained at 1 ml/min. The mobile phase consists of acetonitrile and water in the ratio of 50:50 (v/v). Different compounds were tested as an IS for the chromatographic procedure. Among them, gemcitabine was eluted within 8 min of the analysis and has a better symmetry as well as resolution with respect to lapatinib. It shows that gemcitabine behaves in a similar way to the analyte under investigation. Hence, gemcitabine has been chosen as an IS. The detection was carried out at wavelength of 232 nm with a run time of 8 min. The retention times for lapatinib and gemcitabine hydrochloride were found to be 4.25±0.05 and 6.10±0.05 min, respectively (fig. 2). In the present method, the retention time for lapatinib is 4.25±0.05 min, which is lower compared to 6.5 min of the earlier HPLC validation method proposed by Haribabu et al. [6]. In simultaneous test for six tyrosine kinase inhibitors by LC-MS/MS by using a gradient of acetonitrile containing 1% formic acid with 20/10 mM ammonium formate, the retention times were 8.5/6.6 min for lapatinib detection [8,10], whereas, the retention time was only 1.8 min in UPLC-MS/MS method adopted by Bouchet et al. [12] under a gradient of combination of phase A (4 mM ammonium formate, pH 3.2) and phase B (90% acetonitrile and 10% phase A). 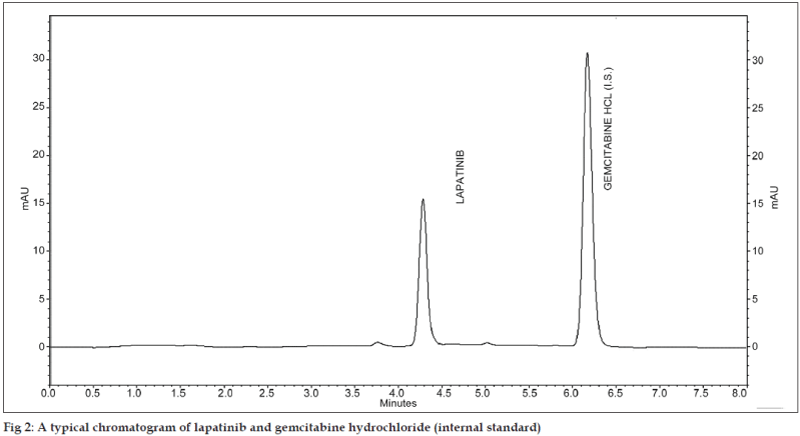 The main validation parameters such as linearity and range, accuracy and precision, recovery, ruggedness, limit of detection (LOD) and limit of quantitation (LOQ) were evaluated in developed method [14].

Working standard solutions of lapatinib (concentration ranges from 2 to 60 μg/ml) containing gemcitabine hydrochloride (5 μg/ml) as an IS were prepared using mobile phase as a solvent. Twenty microliters of each working solution was injected into the HPLC system to obtain the chromatogram. Area under curve (AUC) values for analyte and IS were measured (Table 1). The calibration curve was constructed by plotting ratio of AUC (of analyte to an IS) versus analyte standard concentration. The linear dynamic was found to be within the range 1-60 μg/ml. The regression of the curve was computed by linear regression fitting and its mathematical expression was y=0.025949x+0.054673 (where y is the ratio of peak areas of the analyte to that of an IS and x is the concentration of lapatinib) with a correlation coefficient (R2) of 0.996408. This regression equation was used to estimate the amount of lapatinib in tablet.

A standard solution containing 20 μg/ml of lapatinib and 5 μg/ml of gemcitabine hydrochloride was used to determine the precision of the developed method. The prepared solution was injected into the HPLC system in six replicates under the same chromatographic conditions. The chromatograms were recorded for the intra and inter-day variations (Table 2). The percentage of relative standard deviation (RSD) for the calculated values was 0.223, which were very much within the allowable limit of 2% [15], which indicates that the developed method shows precision. In the measurement of a range of tyrosine kinase inhibitors in human plasma using turbulent flow LC-MS/MS [10,11] and UPLC-MS/MS [12] methods, the percentage of RSD varied from 3.9 to 8.1 for lapatinib estimation.

*All the values are the averages of three determinations, IS=Internal standard, AUC=Area under curve, RSD=Relative standard deviation

*All the values are the averages of three determinations

For determination of sensitivity of the proposed method, LOD and LOQ were calculated. The lowest detectable concentration of the analyte by the method is LOD whereas the minimum quantifiable concentration is LOQ. LOD and LOQ for lapatinib were calculated according to the International Conference on Harmonization guidelines by using S (standard deviation of the response) and σ (slope of the calibration curve) and the results indicate that the proposed method is sensitive to detect and quantify. The system suitability parameters were: Theoretical plates per meter (10,136); height equivalent to theoretical plates (0.0098); tailing factor (2.0). The limit of detection (LOD=3.3×σ/S) and limit of quantitation (LOQ=10×σ/S) were established at a signal-to-noise ratio 1:3 and were found to be 0.265 and 0.884 μg/ml, respectively.

The ruggedness of the proposed method was evaluated by applying the developed procedure for assay of lapatinib using the same instrument by two different analysts under the same optimized conditions at different days. The obtained results were found to be reproducible, since there was no significant difference between analysts. Thus, the proposed methods could be considered rugged.

Two tablets (Tykerb-250 mg) were powdered and used for estimation. An IS was added prior to the tablet powder treatment step, so that any losses of the analyse during sample preparation can be paralleled by losses of the IS. Accordingly, the standard will correct for these losses. An accurately weighed portion of powder equivalent to 25 mg of lapatinib was dissolved in 25 ml of the mixture of acetonitrile and water (50:50 v/v) and filtered through 0.4 μm membrane filter. From the filtrate, 0.1 ml was pipette in to 10 ml graduated test tube and made up to volume with the mobile phase. Twenty microliters of the sample was injected in to the column. The extracts of the formulations containing lapatinib showed no significant peaks except that of lapatinib. This indicates that the excipients in the solid dosage form did not interfere the estimation and hence, the proposed method was found to be specific. The drug content in the tablet was quantified using the regression equation was found to be 99.98%.

In conclusion, the values of recovery studies indicate that the method was accurate and low percent RSD indicates the reproducibility of assay of lapatinib in bulk drug and dosage forms. The method was rapid as the run time was only 8 min and method was also economical as the mobile phase was a mixture of acetonitrile and water.