Dispensing of a prescription can be defined as the provision of a medicine and includes verification of the prescription, solving medication-related issues, selection of the appropriate product, proper labelling, and subsequent supply with the appropriate counselling on its use [1]. In many countries worldwide, dispensing is traditionally considered as the exclusive role of the pharmacists, while physicians focus on their expertise of diagnosing and prescribing [2]. This separation of the role of prescriber and dispenser is known as dispensing separation, and has been shown to be effective in reducing drug expenditure and unnecessary prescribing in countries that have recently enforced a separation policy, with beneficial effects on total health expenditure through the prevention of medication-related errors [3,4]. In certain countries however, especially those with a historical shortage of pharmacists, dispensing separation is not practiced.

Malaysia is an example of a country that does not enforce dispensing separation and where its effects are especially evident in the private healthcare sector. Laws governing the dispensing of medicines in Malaysia are described in the Poison Act 1952 and associated regulations; these laws legally allow physicians to both prescribe and dispense medication (i.e. dispensing doctors) and is currently a subject of heated debate as it makes it non-compulsory for prescriptions to be dispensed by pharmacists [5]. Briefly, healthcare in Malaysia is provided by a government-funded public sector (where the patient pays only a nominal fee) and a private healthcare sector (where most patients pay out-of-pocket or through insurance coverage) [6]. In the public sector, dispensing separation is essentially practiced, as physicians provide prescriptions, which are dispensed by pharmacists [5]. As the pharmacy is typically located on the same premises and patients are also not required to pay for their medicines, this negates any effect of cost and convenience on the separation policy. However in the private sector patients are essentially given a choice: they can either obtain medicines from the prescribing physician at the clinic or hospital in which they were treated, or request for a prescription and fill said prescription at a community pharmacy of their choosing.

As obtaining prescription-only medicines from a pharmacy is not mandatory in this setting, questions remain to be answered whether pharmacy dispensing services are under-utilized, especially as the national pharmacist-population ratio is expected to meet the WHO recommendation of 1:2000 by the end of 2017 [7]. The number of both chain and independent community pharmacies has also seen significant growth in tandem with pharmacist numbers. An evaluation of actual prescriptions filled at community pharmacies would therefore provide an indication of the utilization of dispensing services in a healthcare system where patients are provided this choice. The prescriptions themselves would additionally provide data alluding to the conditions (source, medication class) in which patients choose to exercise their right to fill their prescriptions elsewhere, rather than obtaining it straight from the prescriber. Therefore, in this study we have evaluated prescriptions dispensed at community pharmacies with the aim to determine the rate of prescriptions dispensed in the absence of dispensing separation, the source of these prescriptions, and the typical medication dispensed in order to obtain preliminary data regarding the utilization of dispensing services.

This study was a retrospective, cross-sectional study. Approval was obtained from the Taylor’s University Human Ethics Committee. Informed consent and access to the prescriptions was obtained from the pharmacist-in-charge at the respective pharmacies. Convenience sampling was utilized to select twenty community pharmacies in the Klang Valley, Malaysia for the study. The sample comprised of 12 chain pharmacies (defined as corporate-owned pharmacies with multiple branches) and 8 independent pharmacies (defined as individual-owned pharmacies). The prespecified inclusion criteria were that all pharmacies selected were required to have complete physical prescription records available at the pharmacy for the duration of January to August 2016. Pharmacies that did not complete prescription records for this duration were excluded. All prescriptions dispensed by the pharmacies from the eight month period from January to August 2016 were analysed by the researchers and the relevant data was recorded in a structured data collection form. Data extracted included source of prescription, prescriber class and classification of prescribed medications. Prescribed medications were classified according to the Anatomical Therapeutic Chemical classification system level 1 [8].

Table 1: Prescription Frequency According to Pharmacy Type, Source of Prescription, and Prescriber Class 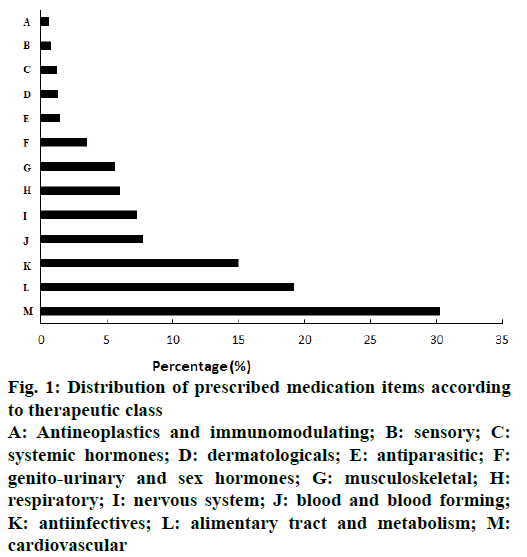 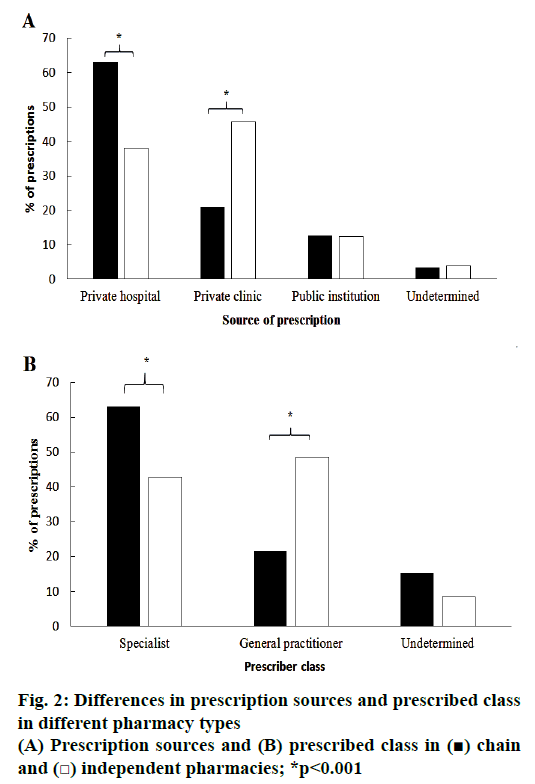 For the few patients who did choose to exercise their right to fill their prescription at community pharmacies, the majority of these prescriptions appeared to originate from private hospitals, as compared to private clinics and public institutions. One plausible explanation of this observation is that of cost and generics availability; the price of medication in Malaysian private hospitals has been reported to be as high as 12 times the International Reference Price (IRP) for innovator medicines and as high as 7 times the IRP for generics [11]. The convenience associated with obtaining medication, especially for chronic medication or repeat prescriptions, may have also contributed to this finding. In a similar vein for prescriptions originating from private clinics, dispensing doctors have also been shown to be less likely to prescribe generic medications when compared with non-dispensing doctors [11]. In this context, it was therefore also somewhat surprising to see a fair number of prescriptions from government institutions, given that their patients are not required to pay for their medications. This is attributable in part to the prescribing of medications that are not available in the National Drug Formulary by doctors in public hospitals. Additionally, the supply of medication at such premises is also associated with long waiting times, which has been directly linked to patient dissatisfaction [12]. It is therefore likely that a combination of these two factors which drive patients to obtain their medications from community pharmacies.

The therapeutic class of the prescribed medications revealed that the majority of the medications were for chronic ailments, as cardiovascular and alimentary tract (diabetes medication fell under this category) in combination represented almost 50 % of all medications prescribed. This was not unexpected, as besides the fact that cardiovascular disease and diabetes are among the common conditions requiring chronic treatment [13], the influence of cost and convenience are more likely to be augmented with long-term use of a medication. It was however noteworthy that the 3rd highest contribution to medication dispensed was antiinfective for short-term use, comprising 15 % of all medications prescribed. Considering that this study did not capture antiinfective dispensed by the physicians themselves, it is likely this is an underestimation of the true rate of antibiotic prescribing and raises the question regarding the appropriateness of antibiotic prescribing at a time where resistance continues to a major point of concern [14,15]. Indeed, it has been shown that prohibiting physicians from dispensing significantly reduces inappropriate prescriptions of antibiotics [16].

There were inevitably several limitations and caveats associated with our study. For one, this study was a cross-sectional study with a sample size that was limited and confined to the urban/suburban setting of the Klang Valley, which is likely to have a higher number of private hospitals. Extrapolation of these findings to the general population therefore may not provide an accurate picture of the current situation, although it highly likely that the utilization of dispensing services would be even lower in rural areas due to the lower number of available pharmacies. The cross-sectional nature of this study also did not allow us to capture the supply of prescription medicines from repeat prescriptions that had not been fully dispensed, as the patient would continue to be in possession of the prescription. Finally, as previously mentioned even when a prescription is provided to the patient by the physician, it is not unheard of for many patients to purchase their medication from pharmacies without actually providing the prescription (despite efforts at curbing this by local enforcement agencies). This may introduce possible bias in the sample and result in an underestimation of the true rate, as pharmacy dispensing services would essentially be utilized without a recorded prescription. While we readily acknowledge these limitations, this study nevertheless provides some pertinent baseline data regarding the utilization of pharmacy dispensing services and the nature of prescriptions currently filled at community pharmacies in the absence of a mandatory separation policy.

The introduction of dispensing separation continues to be a controversial subject of heated debate in Malaysia, and is likely to continue as so in the years to come despite the recent surge in the number of pharmacists. In the absence of such a system our study reveals that pharmacy dispensing services remain underutilized. For those who do fill their prescriptions at community pharmacies, the majority originate from private hospitals, likely driven by the high cost of medications and lack of generics. For similar reasons and augmented by one of convenience, long term medication such as cardiovascular and diabetic medication were the most frequently dispensed medication at community pharmacies, and represent a unique opportunity for pharmacists to put their expertise to use. This was followed by short-term antiinfectives, a finding which would certainly require further investigation. Patients who obtained their prescriptions from private hospitals were more likely to fill them at chain pharmacies, whereas prescriptions from private clinics were more likely to be dispensed at independent pharmacies. Overall, it appears that despite the lack of mandatory dispensing separation there exists a small section of the public that continues to seek pharmacy dispensing services. As questions remain regarding patient knowledge on their rights to fill prescriptions elsewhere, efforts to educate the public on this option should continue regardless of the status of dispensing separation in the country, so that patients themselves may make informed choices regarding the dispensing of their medicines.