Cinnamomum camphora is a large evergreen tree that grows up to 20-30 m tall. The leaves have a glossy, waxy appearance and smell of camphor when crushed. Recent studies reported that the main chemical constituents isolated from C. camphora were volatile oil, alkaloids, flavonoids, lignin and organic acids [1-3]. Biological activity testing of C. camphora demonstrated antibacterial, insecticidal, antioxidant, antiinflammatory and analgesic activities [1]. C. camphora has long been prescribed in traditional medicines for the treatment of diseases such as abdominal pain, migraine and eczema dermatitis [4,5]. Camphor possessed six different chemical variants called chemotypes, which are camphor, linalool, 1,8-cineole, nerolidol, safrole, and borneol. The chemical variants seem dependent upon the area of origin of the plant. So far, the analgesic activity of the essential oils of C. camphora of different chemotypes has not been reported. Therefore it is necessary to investigate this aspect.

Analgesic drugs act in various ways on the peripheral and central nervous systems, which temporarily reduce and in some instances completely eliminate pain sensation. Each different type of analgesic drugs has its own side effects [6]. Seeking and screening highly effective and safer analgesic drugs, especially from natural products, is the hotspot in medicinal research. Camphor has analgesic effect, which activates and then desensitizes transient receptor potential vanilloid-1 (TRPV1). The combined desensitization of TRPV1 and inhibition of transient receptor potential A1 (TRPA1) gives a new explanation for the analgesic properties of camphor. Linalool was shown to ease pain in models such as acetic acid-induced writhing response, inflammatory pain and the hot plate test in mice. The possible mechanism might be related to its suppression of proinflammatory cytokines and regulation of NMDA receptor. Topical application of borneol led to significantly greater pain relief than placebo. Experiment in mice showed TRPM8 channel could be the molecular target of borneol [7-9]. So far, no research on the analgesic action of C. camphora oil and other main constituents has been reported. Nitroglycerin-induced migraine animal model is similar to spontaneous human migraine [10]. The aim of the present study was to investigate analgesic effects of essential oils using mouse model of migraine with nitroglycerin. The study can also help to provide a theoretical foundation for the future exploitation and development of nerolidol, acyclic monoterpenoids and sesquiterpenes.

The leaves of C. camphora were collected from Nanjing and were identified. The fresh leaves were cut into pieces. The essential oils of 10 g medicinal materials were extracted by hydro distillation using a Clevengertype apparatus for 2 h and stored at 4° prior to analysis. The chemical composition of the essential oils was analyzed by gas chromatography-mass spectrometry (GC-MS).

Female specific pathogen free ICR mice (20-22 g) were obtained from Jiangning District, Nanjing Qinglongshan Animal Center (Certificate number NO.201712610). The animals were housed under environmentally controlled conditions with free access to water and standard food. Food was withheld overnight prior to experiments while water was still provided ad libitum. The protocols of animal experiments were permitted by the University Animal Care Committee.

The mice were randomly divided into 4 groups of 10 mice per group. All groups were given free access to diet. Migraine was induced in groups I-IV by subcutaneous injection of 10 mg/kg nitroglycerin at 60 min after the last drug treatment. Group II was given 0.1 g/kg ibuprofen, which served as a positive control. Groups III-IV received essential oils daily for 3 d 0.25 or 1 ml/ kg, which represented low and high doses, respectively. Chestnut oil was administered by the same route as the vehicle treatment. The number of head scratching was counted 40 min after the development of migraine by injecting nitroglycerine [11-13]. Blood samples and brain tissue were collected for the determination of NO, nNOS and iNOS content using ELISA kits.

The brain tissue was homogenized and lysed in RIPA lysis buffer. Samples were incubated on a shaking platform at 4° for 30 min and centrifuged at 13 000 g for 10 min at 4°. The supernatant protein concentration was measured by the bicinchoninic acid method, and 300 μg protein was loaded onto a gel, subjected to SDS-polyacrylamide gel electrophoresis, and then electroblotted onto PVDF membranes. Membranes were incubated with NF-κB antibodies according to the manufacturer’s protocol. Protein bands were visualized by enhanced chemiluminescence. The apparent molecular masses of proteins were determined using electrophoresis color markers. Image Tools 3.0 provided tools for processing protein band images and the ratio of optical density of target protein expression to that of β-actin expression was calculated to represent the relative expression amount. Results are expressed as mean±standard error of the mean (SEM). Statistical evaluations were made using t-test, and values were considered significantly different when p<0.05.

Using high performance GC chromatography, the largest detected peaks were for nerolidol and (E)-α- atlantone (Figure. 1, Table 1) and the majority of compounds identified in essential oil were nerolidol (57.39 %) and (E)-α-atlantone (32.41 %).

Forty minutes after model establishment, ear redness, clawing head frequently with forelimb and increasing number of climbing the cage and dysphoria were observed in the model group, while the symptoms mentioned above disappeared gradually in groups given a treatment as shown in Table 2. The symptoms of the mice in the control group lasted from 3 h, then the animals were tired and lie down with reduced activities.

The essential oil exerted an ameliorative effect on experimental migraine.

Further the ability of the essential oil was studied to regulate the indices of NO signaling pathway. As shown in Table 3, essential oil intervention downregulated NO and iNOS levels in a dose-dependent manner, but did not show an obvious impact on nNOS activities. In an attempt to understand the molecular mechanisms that underlie the analgesic activity of essential oil, the expression level of NF-κB of the mouse brain tissue was investigated in a western blotting assay, treatment with essential oils could weaken the expression of the NF-κB protein to further control NO production (Figure. 2). 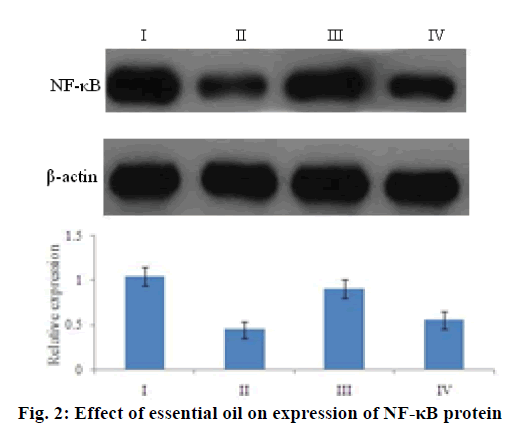 Figure 2: Effect of essential oil on expression of NF-κB protein

Table 3: Analgesic effects of essential oil on no, nnos and inos contents in mice.

Migraine is a primary headache disorder characterized by recurrent headaches that are moderate to severe [14]. Associated symptoms may include nausea, vomiting, and sensitivity to light, sound, or smell [15]. Migraines are believed to be due to a mixture of environmental and genetic factors [16]. The underlying mechanisms are not fully known [17]. They are, however, believed to involve the nerves and blood vessels of the brain [18]. Initial recommended treatment is with simple pain medication such as ibuprofen and paracetamol for the headache, medication for the nausea, and the avoidance of triggers [19]. Specific medications such as triptans or ergotamines may be used in those for whom simple pain medications are not effective [20]. Caffeine may be added to the above [21]. A number of medications are useful to prevent attacks including metoprolol, valproate and topiramate [22].

Nitroglycerin releases NO in vivo and intensely dilate cerebral vessels. NO also has synergetic effect on neurogenic inflammation with other neurotransmitters, which facilitates the transmission of nociception involved in migraine. On the other side, NO has neurotoxic effect, which can stimulate trigeminal neurovascular reflex and induce experimental migraine [23]. The behavioral symptoms and pathological changes are similar to those of a human migraine attack. Modern medical experimental and clinical reports showed that NO played a key role in the mechanism of migraine and vascular headache. NO and NOS inhibitors can significantly alleviate the frequency, intensity, duration and concomitant symptoms of migraine attacks [24].

This investigation found that the essential oil and ibuprofen treatment can significantly reduce the frequency of head scratching in a mouse model of migraine model induced by nitroglycerin. NO, iNOS and NF-κB levels decreased obviously after the intervention with essential oil, which showed that the essential oil could suppress pain from NF-κB/ iNOS/NO signaling pathway and weaken neurogenic inflammation. NF-κB is a protein complex that controls transcription of DNA, cytokine production and cell survival [25]. NF-kB induces the expression of iNOS and overexpressed iNOS can catalyze L-arginine to produce NO. NF-κB can also activate other proinflammatory factors, and then cause neurogenic inflammation reaction, which inducts a headache by sensitization of pain center. NF-κB plays an important mediating role in the pathogenesis of migraine [26]. Essential oil of C. camphor might inhibit the expression of NF-κB and iNOS and thus reduce NO production and neurogenic inflammatory response (Figure. 3). Therefore essential oil of camphor could treat migraine. Nerolidol and (E)-α- atlantone appear to be the main analgesic constituents, which needed further research for confirmation.