Type 2 diabetes mellitus (T2DM) is possibly the world’s fastest growing metabolic syndrome of multiple aetiologies causing hyperglycemia[1]. It accounts for 90-95 % of all diabetic cases[2]. DM may be genetic or acquired by inappropriate production of insulin from beta cells of pancreas[3]. While the current T2DM drugs that enhance insulin release have been therapeutically beneficial, they are associated with several side effects including unpredictable hypoglycemia and body weight gain. Thus, there is a need for more effective drugs, with fewer side effects, to treat T2DM[4].

A popular theory on meal-induced insulin secretion, the ‘incretin effect’ states that glucose or any other drug is more effective on the pancreatic cells when administered orally than given through intravenous or subcutaneous injections[5]. Glucagon-likepeptide-1 (GLP-1) and glucose-dependent insulinotropic polypeptide (GIP), two major incretin hormones that are secreted into the circulation by ‘L’ and ‘K’ cells of the small intestine, respectively, are responsible for 50 % to 70 % of glucose dependent insulin release[6]. These compounds have emerged as a new class of drugs for the treatment of type 2 diabetes[7]. Dipeptidyl peptidase IV (DPP IV) is a serine protease responsible for in vivo degradation of endogenous peptides by cleaving the penultimate (N-terminal) proline or alanine[8]. Dipeptidyl peptidase IV (DPP IV, EC 3.4.14.5), a serine peptidase, is one of the newest pharmaceutical targets for type 2 diabetes treatment[9]. Sitagliptin, Merck’s lead DPP-4 inhibitor which was the first DPP-4 inhibitor approved by the United States Food and Drug Administration in October 2006.Subsequently, additional DPP-4 inhibitors have entered the market. These include vildagliptin, saxagliptin, linagliptin, and alogliptin. The sideeffects observed with the ‘Gliptins’ are specific to the molecules which inhibit other substrates rather than DPP IV per se. To avoid the side effects associated with the inhibition of other members of DPP family like DPP-II, DPP-VIII, and DPP-IX it becomes necessary to design selective inhibitors of DPP IV enzyme[10]. Omarigliptin (MK-3102) is a potent, selective, oral DPP-4 inhibitor with a half-life that supports once-weekly dosing[11,12] (fig. 1). The large scaffold diversity and properties of natural products (NPs), such as structural complexity and drug similarity, makes these molecules ideal starting points for drug design[13].Therefore the present study aims at identification of DPP IV inhibitors which are of natural origin based on the pharmacophoric features of omarigliptin and further molecular docking studies with DPP IV protein (4PNZ) (fig. 2). 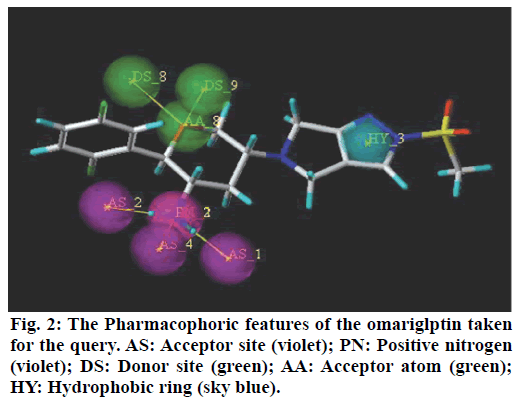 aThe Qfit score represents how close the ligand atoms match the pharmacophore query, which is generally in the range of 0 to 100. bTotal score is the total Surflex Dock score expressed as -log (Kd) to represent binding affinities which include hydrophobic, polar, repulsive, entropic and solvation terms. cCrash value is the degree of inappropriate penetration by the ligand into the protein and of interpenetration between ligand atoms (self-clash) that are separated by rotatable bonds. Crash scores close to 0 are favorable. dPolar value is contribution of the hydrogen bonding and salt bridge interactions to the total score. The polar score may be useful for excluding docking results that make no hydrogen bonds. The protein was downloaded from Protein Data Bank (PDB) then Biopolymer preparation wizard is used for protein structure preparation. Co-crystalized ligand was removed from the structure then water molecules were removed, H atoms were added and side chains were fixed during protein preparation. Protein structure minimization was performed by applying Molecular modeling force field 94s (MMFF94s) force field and partial atomic charges were calculated by Gasteiger-Marshalli method. Protomol was generated by considering the active ligand’s binding pose. The ligands were taken from ZINC database, and then were prepared using ligand preparation wizard. The energy minimization was done using MMFF94s force field and atomic charges were added with Gasteiger-Huckel.

Surflex-Dock was used for molecular docking. Surflex module docks ligands automatically into ligand binding site of receptor using a protomol based method and an empirically derived scoring function. The protomol is a unique and important factor of the docking algorithm and is a computational representation of assumed ligands that interact with the binding site of receptor. Surflex-Dock’s scoring function contains hydrophobic, polar, repulsive, entropic, and solvation terms. Scoring function of Surflex can also be improved by matching algorithm which allows docking of a fragment of ligand to protein. The fragment is allowed to rotate from its original position during optimization of pose. Docking results contain three information: total score, crash value and polar value.

DPP IV is a serine protease responsible for the degradation of the insulinotropic incretin GLP-1 (fig. 4). Pharmaceutical inhibitors of this enzyme have successfully reduced hyperglycemia and hemoglobin A1C levels as a monotherapy and in combination with other anti-diabetic agents[14]. Natural extracts play an important role in traditional medicines for the treatment of diabetes mellitus and Natural products have proven historically to be a promising pool of structures for drug discovery[15,16]. Hence the present study was undertaken to identify potential DPP IV inhibitors from natural origin. Recently, Bhadauriya suggested that a synergistic combination of pharmacophore-based virtual screening and docking-based virtual screening was an efficient approach to the design and development of novel drugs since this combination could potentially nullify limitations and augment mutual strengths. The ligandbased virtual screening method works on the principle of similarity, wherein similar compounds are assumed to produce similar effects[17]. Hence in this study we used the pharmacophoric features of MK-3102 to identify natural molecules taken from ZINC database as potential DPP IV inhibitors. The detailed virtual screening workflow was given in (fig. 1). 3 Acceptor site, 1 Positive nitrogen, 2 Donor sites, 1 Acceptor atom and 1 Hydrophobic ring are the given pharmacophoric features of omarigliptin, employed as a 3D search query for retrieving potential hits. Then the molecules with good Qfit were docked with 4PNZ protein.

The binding site of DPP IV consists of Ser630 (that together with Asp708 and His740 form the enzyme catalytic triad), the hydrophobic S1 pocket (formed by Tyr631, Val656, Trp659, Tyr662, Tyr666 and Val711), the hydrophobic S2 pocket (formed by Arg125, Phe357, Arg358, Tyr547, Pro550 and Asn710) and the N-terminal recognition region (formed by Glu205, Glu206 and Tyr662).Based on the analysis of the DPP IV crystal structures and interpretation of the structureactivity relationship (SAR) data, both the lipophilic S1 pocket and the Glu205/Glu206 dyad can be considered as crucial molecular anchors for DPP IV inhibition[12]. 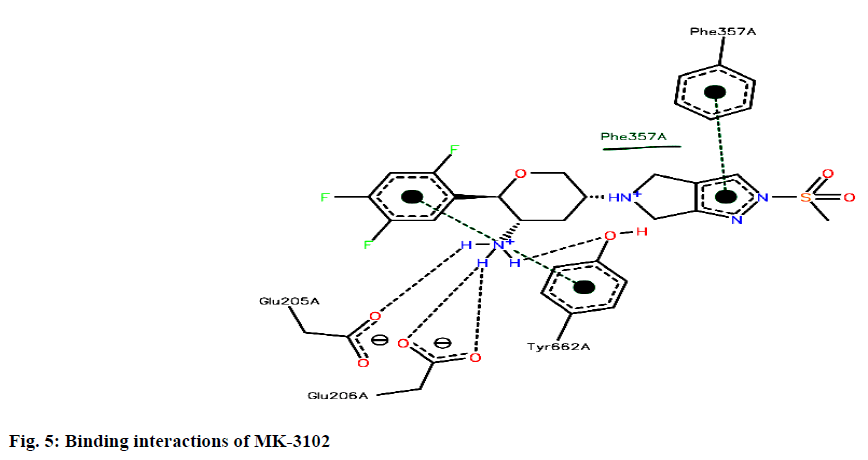 Figure 6: Structures of the top five molecules selected based on docking studies In the present study the virtual screening was performed based on pharmacophoric features of omarigliptin which contains 3 Acceptor site 1 Positive nitrogen 2 Donor sites, 1 Acceptor atom and 1 Hydrophobic ring. The molecules with good Qfit score were docked with DPP IV protein (4PNZ) based on the docking scores and binding interactions the lead molecules were identified. ZINC38549932, ZINC72325326, ZINC98363871, ZINC201111835 and ZINC39999688 are the molecules which possess good docking score and possess potential Anti-diabetic properties.