Scoparia dulcis is an annual erect herb distributed throughout tropical and subtropical regions of India, America, Brazil, West Indies, and Myanmar [1]. The whole plant is used for ailments like diarrhea, stomach-ache, kidney stones, kidney problems, and fever. Scoparia dulcis is a rich source of flavones, terpenes and steroids [2,3].

After the recommendations made by World Health Organization (WHO) on diabetes mellitus (DM), the search for safe and effective hypoglycaemic agents has become an important area of research [4]. The search for novel hypoglycaemic compounds from medicinal plants is an important aspect of this and in view of the difficulties in testing in vivo studies, several in vitro tests have been developed in recent years [5]. The numbers of diabetic patients are rapidly rising in most parts of the world, especially in developing countries such as India, Thailand and Indonesia. Postprandial hyperglycaemia is one of the earliest abnormalities of glucose homeostasis associated with type 2 DM and is markedly exaggerated in diabetic patients with fasting hyperglycaemia. Postprandial hyperglycaemia is independent risk factor in the development of macrovascular complications of DM [6].

A sudden increase in blood glucose levels, which causes hyperglycaemia in type 2 DM patients, occurs due to the hydrolysis of starch by pancreatic α-amylase and the uptake of glucose by intestinal α-glucosidases [7]. An effective strategy for type 2 diabetes management is the strong inhibition of intestinal α-glucosidases and the mild inhibition of pancreatic α-amylase [8]. α-Amylase is present in both salivary and pancreatic secretion and is responsible for cleaving large maltooligosaccharides to maltose, which is then a substrate for intestinal glucosidase [9].

As a number of antihyperglycemic agents have been found in plants, research into understanding the scientific basis for plant-based traditional medicines from various cultures has increased. Scientists explore clues to discover new therapeutic drugs for type 2 DM [10]. Streptozotocin is an antimicrobial agent and has also been used as a chemotherapeutic alkylating agent and reported as diabetogenic. Again, this insulinopenia syndrome, called ‘streptozotocin diabetes’, is caused by the specific necrosis of the pancreatic beta cells and streptozotocin has been the agent of choice for the induction of diabetes mellitus in animals ever since [11].

Indian traditional medicines have a long history to treat DM by the herbs and herbal extracts. Scoparia dulcis is one of the traditional antidiabetic herbs. There were so many research work done on its antidiabetic properties. However, no one had studies its effect on enzymes α-amylase and α-glycosidase that regulate postprandial glucose absorption and metabolism and is responsible for postprandial hyperglycaemia. This study aimed to brief the antidiabetic properties of S. dulcis by correlating its antioxidant properties with in vitro and in vivo management of diabetes [12].

All the experiments were carried out using Wistar albino rats obtained from animal house, Birla Institute of Technology, Mesra, Ranchi, India and kept in polypropylene cages with paddy husk as bedding. Animals were housed at a temperature 24±2º and relative humidity of 60-70%. A 10:14 light:dark cycle was followed. All animals were allowed to free access to water and fed with standard commercial rat chow pallets (M/s. Hindustan Lever Ltd, Mumbai). All the experimental procedures and protocols used in this study were reviewed by the Institutional Ethics Committee (Reg. No:621/02/ac/CPCSEA) and were in accordance with the guidelines of the CPCSEA, Ministry of Forests and Environment, Government of India.

The antioxidant activity was determined by two methods i.e., reducing power and scavenging activity of DPPH. Total extractable polyphenol (TEP) of methanol extract of Scoparia dulcis (MESD) and water extract of Scoparia dulcis (WESD) were determined by taking 500 mg of each extracts and extracted sequentially with 40 ml methanol:water (50:50 v/v) and 40 ml acetone:water (70:30 v/v) at room temperature for 60 min in each treatment. Supernatants from these extractions were combined. They were concentrated to a small volume under reduced pressure at 50° and volume was made up to 10 ml with the same solvents (v/v). TEP were assayed spectrophotometrically by the Folin-Ciocalteau method using gallic acid as a standard and result expressed as gallic acid equivalents [13].

The antioxidant activity of the S. dulcis extracts, based on the scavenging activity of the stable DPPH free radicals was determined by the method described by Kumaran and Karunakarn [14]. MESD and WESD (0.1 ml) were added to 3 ml of a 0.004% methanol solution of DPPH. Water (0.1 ml) was used as control. Absorbance was determined at 517 nm after 30 min.

The in vitro enzymatic study was performed first on α-amylase activity. Different concentration of the S. dulcis extract was mixed separately with 100 ml of the 2% potato starch solution in 200 ml beakers. To these mixtures 1 g of a-amylase each were added and stirred vigorously at 37°. After 30 min 0.1 mol/l sodium hydroxide was added to terminate the α-amylase activity. The glucose content of the solution was determined by glucose oxidase peroxidase method [6].

The inhibitory activity of α-glucosidase enzyme was determined by incubating a solution of starch (2% w/v sucrose) 1 ml with 0.2 M Tris buffer pH 8.0 and various concentration of plant extract for 5 min at 37º. The reaction was initiated by adding 1 ml of α-glucosidase enzyme (1 U/ml) to it followed by incubation. Then the mixtures were heated in boiling water bath to stop the reaction. The amount of liberated glucose was measured by glucose oxidase peroxidase method [16].

The IC50 value of enzymatic activity of the plant extract was determined by performing the assay as above with varying concentration of the plant extract ranging from 20 to 100 μg. The IC50 value was determined from plots of percent inhibition vs log inhibitor concentration and calculated by nonlinear regression analysis from the mean inhibitory values [17]. Acute oral toxicity was performed in mice by following organization for economic cooperation and development (OECD) guidelines [18].

The whole study was divided in four groups, each group contain six animals. Streptozotocin (60 mg/kg) was injected to rats in each group of animals following 18 h fast. After 48 h the blood glucose level of rats were determined by glucose oxidase method. Only those animals which showed hyperglycaemia (blood glucose levels=200-500 mg/dl), were considered diabetic and taken for further experimentation. The group I received vehicle only (Tween-80, 1%) and served as control. Group II and group III received MESD 200 and 400 mg/kg therapeutic dose, respectively and group IV received glibenclamide 1.0 mg/kg. The study was carried out after repeated (once a day) administration of the extract for 21 consecutive days. Basal glycaemia was determined in overnight fasted animals. The vehicle (1% tween 80), MESD (200 and 400 mg/kg) and glibenclamide (1.0 mg/ kg) were orally administered to the animals of group I-IV for 21 consecutive days. Blood samples collected on the 7th, 14th and 21st days were analyzed for the determination of blood glucose level [19].

S. dulcis MESD contains 4.9% and WSED 3.2% of total extractable polyphenolic compound. The antioxidant activity of TEP of MESD and WESD showed promising result in both methods such as DPPH and reducing power determination method. DPPH activity was directly proportional to TEP contents (fig. 1). The MESD showed higher absorbance as compared to WESD. The reducing power was found higher in MESD (0.650±0.011 in 300 mg/ml) as compared to WESD (0.533±0.017 in 300 mg/ml) (fig. 2). The TEP contents and antioxidant activity results were strongly supported MESD to be more active antidiabetic agent as compared to WESD. That’s why MESD was selected for further in vivo and in vitro antidiabetic activities.

These activities showed Scoparia dulcis can be used as an antioxidant and some author directly correlate to the antioxidant activity with antidiabetic activity. Relationship of extracts total extractable phenolic content to antidiabetic activity, previous research has shown that plant phenolic extracts and purified phenolic compounds can inhibit the in vitro activity of α-amylase [20].

In vivo study of MESD was done on streptozotocininduced diabetic in rats. The effect of the treatment with extract and glibenclamide on blood glucose level in diabetic rats after post-treatment days was shown in Table 2. The study was conducted by collecting blood on 7th, 14th and 21st days after induction of diabetes and analyzed for the determination of blood glucose level. All the values were found significant in both treatment dose (200 and 400 mg/kg) as compared to control and standard glibenclamide (Table 2). These findings suggested that methanol extract of Scoparia dulcis has hypoglycaemic activities, which validates its traditional use in Odisha, India.

In vivo study of MESD was done on streptozotocininduced diabetic in rats. The effect of the treatment with extract and glibenclamide on blood glucose level in diabetic rats after post-treatment days was shown in Table 2. The study was conducted by collecting blood on 7th, 14th and 21st days after induction of diabetes and analyzed for the determination of blood glucose level. All the values were found significant in both treatment dose (200 and 400 mg/kg) as compared to control and standard glibenclamide (Table 2). These findings suggested that methanol extract of Scoparia dulcis has hypoglycaemic activities, which validates its traditional use in Odisha, India. 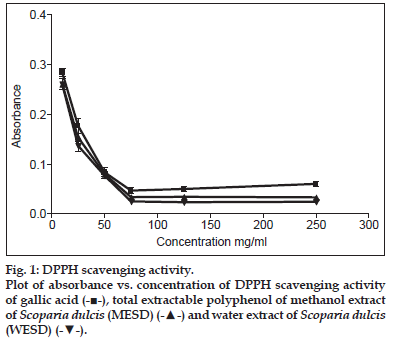 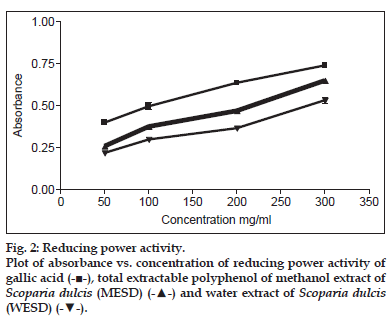 We are thankful to HOD, BIT, Mesra, Ranchi and HOD, School of Chemistry, Sambalpur University, Burla, Sambalpur, Odisha to complete our research work without any hurdle by allowing us to use research facility available with them. We also thank the management of Gayatri College of Pharmacy, Sambalpur, for their enthusiasm during the research work.