The title compounds 1-substituted-4-phenyl-1,2,4-triazolo[4,3-a]quinazolin-5(4 H )-ones were synthesized by the cyclization of 2-hydrazino-3-phenylquinazolin-4(3 H )-one with various one carbon donors. The starting material 2-hydrazino-3-phenylquinazolin-4(3 H )-one was synthesized from aniline. Investigation of antimicrobial activity of the test compounds was made by agar cup-plate method against 8 pathogenic bacteria including Mycobacterium tuberculosis , 3 pathogenic fungi and antiHIV activity against replication of HIV-1(IIIB) and HIV-2(ROD) in MT-4 cells. The compound 7e inhibited 21% growth of M. tuberculosis at 6.25 µg/ml concentration, while the compounds 7c and 7d showed good antifungal activity against Candida albicans ; and the compounds 7c exhibited good antifungal activity against Aspergillus niger .

Quinazolines and condensed quinazolines are reported to show potent cytotoxic [1,2] and antimicrobial activities, such as antibacterial [3], antifungal [4] and antiHIV [5,6]. In our earlier studies we found that 2,3-disubstituted quinazolines are found to possess significant anti-bacterial, antifungal and antiHIV activities [5,6] Later quinazolines attached with thiadiazoles are also found to possess significant antibacterial, antifungal and anti HIV activities [7]. Hence in the present study a series of 1-substituted-4-phenyl-1,2,4-triazolo[4,3-a]quinazolin-5(4H)-ones, the bioisostere of thiadiazole quinazolines were synthesized. The title compounds were synthesized by the cyclization of 2-hydrazino-3-phenylquinazolin-4(3H)-one with various one carbon donors. The starting material 2-hydrazino-3phenylquinazolin-4(3H)-one was synthesized from aniline (Scheme 1), by adopting methods reported [8] from our laboratory. The title compounds were screened for antibacterial, antifungal activity by agar cup-plate method and antiHIV activity against HIV-1(IIIB), HIV-2(ROD) in MT-4 cells. 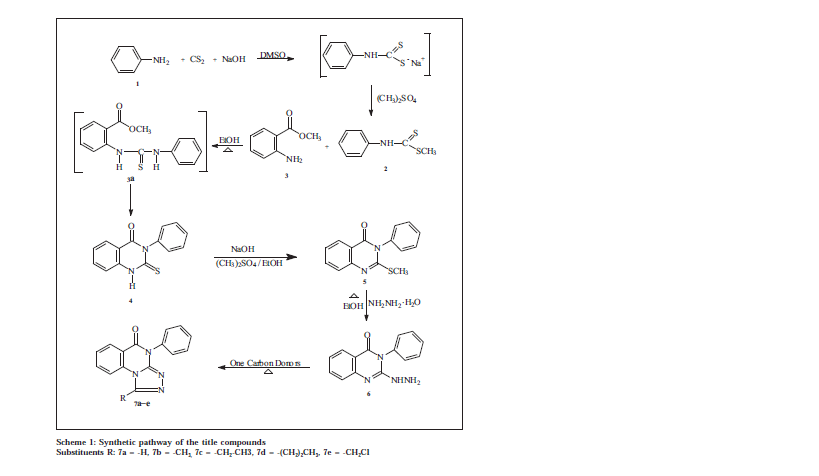 The key intermediate 2-thioxo-3-phenyl quinazolin-4(3H)-one was prepared by adding carbondisulphide and sodium hydroxide solution simultaneously to a vigorously stirred solution of aniline 1 in dimethylsulphoxide during 30 min, stirring was continued for 30 min more. Dimethyl sulphate was added to the reaction mixture with stirring at 5-10°, it was further stirred for 2 h and poured into ice water to get a solid dithiocarbamic acid methyl ester (2). The compound 2 and methyl anthranilate (3) when refluxed in ethanol for 18 h yielded the desired 2-thioxo-3-substituted quinazolin-4(3H)-one (4). The product obtained was cyclic and not an open chain thiourea 3a. It was confirmed by its low Rf value, high melting point and its solubility in sodium hydroxide solution. The IR spectrum of these compounds show intense peaks at 3220 cm-1 for amino (NH), 1660 cm-1 for carbonyl (C=O) and 1200 cm-1 for thioxo (C=S) stretching. NMR spectrum of 4 showed signals at δ 7-9 (m, 9H, ArH) and 10.5 (s, 1H, NH). Data from the elemental analyses have been found to be in conformity with the assigned structure. Further the molecular ion recorded in the mass spectrum is also in agreement with the molecular weight of the compound.

The 2-methylthio-3-substituted quinazolin-4(3H)-one (5) was obtained by dissolving (4) in 2% alcoholic sodium hydroxide solution and methylating with dimethyl sulphate with stirring at room temperature. The IR spectrum of (5) showed disappearance of amino (NH) and thioxo (C=S) stretching signals of the starting material. It showed a peak for carbonyl (C=O) stretching at 1680 cm-1. The NMR spectrum of compound 5 showed signals at δ 2.5 (s, 3H, SCH3) and 7.0-8.6 (m, 9H, ArH). Data from the elemental analyses and molecular ion recorded in the mass spectrum further confirmed the assigned structure.

The title compounds 7a-e were obtained in fair to good yields through the cyclization of (6) with a variety of one carbon donors such as formic acid, acetic acid, propionic acid, butyric acid and chloroacetyl chloride at reflux. The formation of cyclic product is indicated by the disappearance of peaks due to NH and NH2 of the starting material at 3400-3200 cm-1 in IR spectrum of all the compounds 7a-e. The NMR spectrum of 7a-e showed the absence of NH and NH2 signals. A multiplet at 7.0-8.0 integrating for aromatic protons was observed. The molecular ion recorded in the mass spectrum also in agreement with the molecular weight of the compounds. Elemental (C, H, N) analysis indicated that the calculated and observed values were within the acceptable limits (± 0.4%).

The compounds (7a-e) (Table 1) were tested for antiHIV activity against replication of HIV-1 (III B) and HIV-2 (ROD) in MT-4 cells [5]. The MT-4 cells were grown in RPMI-1640 DM (Dutch modification) medium (Flow laboratories, Irvine, Scotland), supplemented with 10% (v/v) heat inactivated fetal calf serum and 20 μg/ml gentamicin (E. Merck, Darmstadt, Germany). HIV-1 (III B) and HIV-2 (ROD) were obtained from the culture supernatant of HIV-1 infected MT-4 cell lines and the virus stocks were stored at -70° until used. The antiHIV assay was carried out in microtiter plates filled with 100 μl of medium and 25 μl volumes of compounds in triplicate so as to allow simultaneous evaluation of their effects on HIV and mock infected cells. Fifty microlitres of HIV at 100 CCID50 medium was added to either infected or mock infected part of microtiter tray. The cell cultures were incubated at 37° in a humidified atmosphere of 5% CO2 in air. Five days after infection the viability of mock and HIV-infected cells were examined spectrophotometrically by the MTT method. The effective dose of compound achieving 50% protection of MT-4 cells against the cytopathic effect (Viruses cause cell degeneration or cell death, which can be seen by microscopical examination of cultures. Cell degeneration is manifested by certain pathological changes) of HIV (EC50), the cytotoxic dose of compound, required to reduce the viability of normal uninfected MT-4 cells by 50% (CC50) were calculated.

Table 1: Antihiv Activity And Cytotoxicity Of The Compounds In Mt-4 Cells

Results of the antiHIV activity indicates that 50% effective concentration (EC50) values of the synthesized compounds against the replication of HIV-1 and HIV-2 in acutely infected MT-4 cells were higher than the cytotoxic concentrations (CC50), which means that the compounds did not exhibited any specific antiHIV activity. When compared to our earlier reported compounds, the test compounds showed less potent activity.

Antibacterial and antifungal activities were carried out by agar cup-plate method [9] at a concentration of 200 μg/ml using DMF-water as solvent against the following organisms Pseudomonas aeruginosa, Vibreo cholerae, Klebsiella pneumoniae, Salmonella typhi, Staphyllococcus aureus, Staphyllococcus epidermitis, Bacillus subtilis, Candida albicans, Aspergillus niger and M. audouinii All bacteria were grown on Muller-Hinton Agar (Hi-media) plates (37°, 24 h) and fungi were grown on Sabouraud dextrose agar (Hi-media) plates (26°, 48-72 h). The zone of inhibition of the synthesized compounds against the bacteria and fungi are presented in Table 2. Also the activity of reference compounds ciprofloxacin and clotrimazole are included.

The synthesized compounds were screened for their in vitro antimycobacterial activity against Mycobacterium tuberculosis at the Tuberculosis Antimicrobial Acquisition and Coordinating Facility (TAACF, USA). Primary antimycobacterial activity screening was conducted at 6.25 μg/ml against Mycobacterium tuberculosis H37RV (ATCC 27294) in BACTEC 12B medium using a broth microdilution assay, the Microplate Alamar Blue Assay (MABA) [10]. Compounds exhibiting fluorescence are tested in the BACTEC 460 radiometric system [10]. The results are expressed in terms of percentage inhibition of growth.