The thiazolidin-4-one derivatives and the corresponding spiro compounds were synthesized from sulphanilamide and were evaluated for anti-inflammatory and analgesic activity in acute and sub acute models. Compounds were also evaluated for antipyretic and cyclooxygenase enzyme inhibitory activity. All the compounds showed significant antiinflammatory, analgesic and antipyretic activity at 100 mg/kg in all the models. The compounds B1, B2, B5, B6, and B8 showed maximum inhibition of COX-2 activity without inhibiting the COX-1 activity. The nimesulide was used as standard drug for comparison. The substitution at R, R 1 and R 2 with the functional groups Cl, OCH 3 , NO 2 and OH in the aromatic ring resulted in increased activity as compared to unsubstituted thiazolidin-4-ones. However the substitution at R 3 with spiro group did not improve the activity. The study suggests that COX-2 binding site may not be a rigid structure but might adopt to various related molecules.

Inflammation is defined as a tissue directed response to noxious and injurious external and internal stimuli, which is predominantly mediated by arachidonic acid metabolites. In the early 1990s two groups independently detected the existence of two cyclooxygenases COX-1 and COX-2 [1]. While the inhibition of COX-2 activity led to antiinflammatory activity, COX-1 inhibition led to ulcerogenic activity. Non steroidal antiinflammatory drugs are a non homogeneous family of pharmacologically active compounds used in the treatment of acute and chronic inflammation, pain and fever. Review of experimental data reveals that subtle changes in the binding site of COX-2 might occur to adopt its structure to the inhibitor [2,3]. This might be the reason for many diverse group of compounds reported to have antiinflammatory activity [4-7]. The survey of newer CoX-2 inhibitors shows that the presence of sulphanamide and biphenyl groups which might be essential for COX-2 activity. Substituted thiazolidin-4- one derivatives have shown promising cyclooxygenase and 5-lipoxygenase inhibiting properties and used as topical antiinflammatory agents for inflamed conditions of skin. Moreover, the inflammation is a general condition associated with infection and sulphonamide group appears to be essential for antiinflammatory activity. Hence various derivatives of thiazolidin-4-ones synthesized were evaluated for their antiinflammatory, analgesic, antipyretic and cyclooxygenase inhibitory activities.

Wistar rats of either sex weighing 150-200 g were used. Animals were housed in groups of six per cage at a temperature of 25±1° and relative humidity of 45±5%. A 12:12 hour light:dark cycle was followed during the experiments. Animals had free access to food and water, however, food was withdrawn six hours before and during the experiments. The animals were obtained from the Central Animal House of J. N. Medical College, Belgaum (India). The Institutional Animal Ethical Committee approved the protocol of the study.

The drugs synthesized in the Chemistry laboratory of K. L. E. S’s College of pharmacy, Belgaum, were used. The drugs were coded as B1 to B8 (thiazolidine- 4-one compounds) and B9 to B11 (Spiro derivatives of thiazolodine-4-one) Table 1. The standard drug nimesulide was obtained from Lincoln pharmaceuticals Ltd. Ahamedabad.

The acute toxicity study was done as per the OECD guidelines (407). The compounds were administered orally in different doses, where 24 h toxicity was recorded to identify the toxic doses. The doses of the test compounds were then fixed on the basis of their acute toxicity as 50 mg/kg and 100 mg/kg for evaluation. The antiinflammatory activity was studied using acute and chronic models.

All the test compounds namely B1 to B11 were administered in two doses 50 mg/kg and 100 mg/kg body weight based upon their acute toxicity studies and nimesulide 50 mg/kg b.w. was used as standard. The test compounds were administered orally to the rats suspended in 0.5% carboxymethyl cellulose (CMC). The control animals received 0.5% CMC. Thirty minutes after drug administration, 0.1ml of 1% carrageenan (Sigma) in normal saline solution was injected into the subplantar region of one of the hind paws. The paw edema volume was recorded using a plethysmometer (UGO Basile, Italy) at different time intervals.

The test compounds, standard and vehicle as mentioned above were administered orally to the mice. Thirty minutes after administration, inflammation was induced by a topical application of 2% xylol (20μl) to the right ear of each mouse. The left ear was kept as control. The positive control group received only 0.5 ml of 1% CMC. After 30 minutes of xylol application, the animals were killed by cervical dislocation. A 6 mm section of ear disc was obtained by punching the ear and then weighed. The inflammation induced by xylol was assessed by the change in the weight of ear punch of treated groups over control and this is called the edema index.

Two sterilized cotton pellets, each weighing 10mg were implanted subcutaneously into axilla in anaesthetized rats. After treatment with test compounds, standard and vehicle for 10 days the rats were sacrificed. They were dissected to take out granuloma tissue and dried at 60° overnight to determine the dry weight. Results were expressed as mg/100 g.

Acetic acid-induced writhing model was employed to evaluate the analgesic activity. The test compounds, standard and vehicle were administered orally to the mice and 30 min later 0.6% acetic acid solution (10 ml/kg.) was injected intraperitoneally. Nimesulide (50 mg/kg) was used as standard. The number of writhes induced in each mouse was observed for 10 min period starting 10 min after injection of acetic acid. The analgesic activity was expressed in terms of percentage inhibition of writhes produced by acetic acid.

The test compounds, standard and vehicle as given above were administered orally. The reaction time for withdrawal of tail was recorded after 60 min from the administration of test compounds. It was determined by immersing the tail up to the caudal portion (5 cm from the tip) in hot water (55±0.5°) and by noting the time taken to withdraw the tail clearly out of water. Observations were made at an interval of 30, 60, and 180 min after the initial reading.

Yeast induced pyrexia was used to evaluate the antipyretic activity of the test compounds. The body temperature of each rat was recorded by measuring the rectal temperature at predetermined time intervals. Fever was induced by injecting 15% suspension of Brewer’s yeast (Saccharomyces cerevisiae) following a standard method [12]. The rats were allowed to remain quiet in the cage for sometime. A thermister probe was inserted 3-4 cm deep into the rectum after fastening the tail to record the basal rectal temperature. The animals were then given a subcutaneous injection of 10 ml/ kg of 15%w/v Brewer’s yeast suspended in 0.5% w/v CMC solution and the animals were returned to their housing cages. Nineteen hours after yeast injection, the rats were again restrained in individual cages to record their rectal temperature. Immediately the test compounds and standard were administered orally at their respective doses. Rectal temperature of all the rats was recorded at 19 h immediately before the administration of test compounds, vehicle and paracetamol (50 mg/kg.) and again at 1hour intervals upto 3hours after the administration.

The Statistical analysis was performed by using One Way ANOVA followed by Dunnet’s Test. and the P<0.01 was taken as significant. 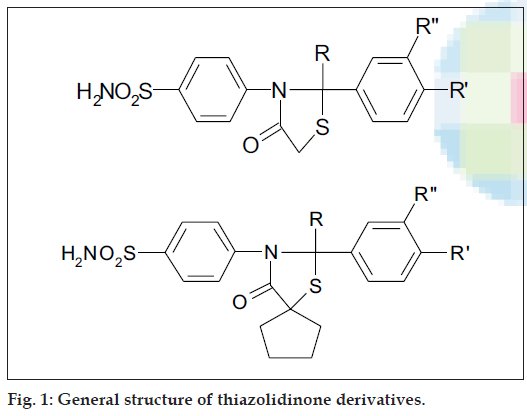 There is tremendous amount of experimental [13] and theoretical [14] works, focused on the study of COX-2 and the existence of high-resolution structural information on the binding site of NSAIDs, several aspects of binding mechanism of DUP-697 and related compounds to COX-2 remains unclear. Observing the data from literature [1-3] reveals that empirical rules formulated for the given set of drugs are not agreeable when applied to a different set, even when both set of compounds share a common background. This suggests that subtle structural changes in binding site of COX-2 might occur to adopt its structure to the inhibitor. This might also be the reason for many diverse group of compounds reported to have antiinflammatory activity[4-7]. The marketed antiinflammatory drugs contain 2-phenyl rings attached to heterocyclic ring systems like thiophene, oxazolidinone, 1,2-pyrazole and 1,3 pyrazoles with a sulfonyl group and such a combination appears to be essential for specific COX-2 activity [3,14]. However, such drugs are also associated with severe adverse effects.

Therefore, from earlier reports and also from our results it can be substantiated that the COX-2 binding site may not be a rigid structure and might adopt to various related groups which may be the reason for thiazolidin-4-one derivatives tested in the present study for having action similar to nimesulide. However substitution at 5-position with spiro moiety resulted in reduced COX-1 and COX-2 inhibitory activity.

In conclusion several derivatives tested in this study showed maximum inhibition of COX-2 activity without inhibiting the COX-1 activity and results are comparable with that of nimesulide. The substitution at particular place i.e., R, R1 and R2 with the functional groups Cl, OCH3, NO2 and OH in the aromatic ring resulted in increased activity as compared to unsubstituted thiazolidin-4-ones and substitution at 5-position with spiro group did not improve the activity.

Authors are grateful to Dr. F. V. Manvi, Principal, K. L. E. S’s College of Pharmacy, Belgaum and Chairman, Board of Management, K. L. E. Society, Belgaum, Karnataka for providing all the facilities to carry out this work.