Entomopathogenic fungus Beauveria bassiana widely used as biopesticide that specifically infect and kill insect pests. The present study was aimed to evaluate antioxidant and cytotoxic potentials of mycelia extracts of ten Beauveria bassiana isolates. Mycelia of Beauveria bassiana were extracted with hexane, ethyl acetate, methanol and water. Antioxidant activity possessed by the mycelial extracts was studied using the 1,1-diphenyl-2-picrylhydrazyl radical assay. Cytotoxic activity of mycelia extracts was tested using A-549 cell lines employing sulforhodamine B assay. Among all the mycelial extracts of Beauveria bassiana isolates, ethyl acetate extract exhibited highest antioxidant activity with an IC50 of 202.45 µg/ml. Highest cytotoxic activity was observed with the ethyl acetate extract (116 %) while standard cisplatin showed 102 %. Further investigations needed on isolation and characterization of secondary metabolites that could be responsible for these activities in a bid to develop new compounds for cancer.

Natural products contain various compounds with antioxidants, antibacterial and cytotoxic properties [1]. Fungi are one of the groups of microorganisms, which are widely spread and having medicinal importance. Antioxidants are compounds that neutralize harmful free radicals and oxidants formed during metabolic reactions and help in prevention of cancer, cardiovascular diseases, neural disorders, Alzheimer’s disease, Parkinson’s disease, ulcerative colitis, alcohol-induced liver disease and other diseases [2]. Many antioxidant compounds are derived from natural sources including plants, fungi and bacteria [3]. Fungal metabolites are known for having antibacterial, antifungal, larvicidal, antioxidant and other activities [4-6]. Beauveria bassiana is one of the most used entomopathogenic fungi as an alternative to chemical pesticides in insect pest management [7]. B. bassiana has been used by Korean traditional healers to treat many diseases by consuming infected and dead insects [8]. B. bassiana produces exogenous metabolites like iso-isariin, felinones, destruxins, beauvericin are having antiviral, anticancer, antiinflammatory and antimalarial properties [9]. Insecticidal toxins produced by B. bassiana during process of infection in hemolymph of insects induces cytotoxicity [10]. Cytotoxic activity is one of the most focused areas for medicinal activities of secondary metabolites produced by bacteria, fungi, plants and animals. Acquiring resistance to chemotherapeutic drugs made focus on new metabolites to act against cancer cells [11]. Cytotoxic compounds are most promising compounds for curing cancers or tumours in a most systemic way. Isolation and characterization of metabolites with cytotoxic activities has demand for curing various diseases [12]. There have been very few reports on mycelial metabolites from B. bassiana with medicinal properties. The present investigation was taken up to study the antioxidant and cytotoxic properties of mycelial extract of ten B. bassiana isolates.

Ten B. bassiana isolates were used in the present study in which two isolates of B. bassiana (B. bassiana 1 and B. bassiana 2) were isolated from a local field infected insect Helicoverpa armigera on pigeon pea crop at Araku area of Visakhapatnam district and the remaining eight isolates (ARSEF 1166, ARSEF 3286, ARSEF 1512, ARSEF 1314, ARSEF 1149, ARSEF 1788, ARSEF 3120, ARSEF 326) were obtained from International Culture Collection Center USDA-Agricultural Research Service Collection of Entomopathogenic Fungi (ARSEF). B. bassiana isolates were cultured on modified Sabouraud’s dextrose broth fortified with 1 % yeast extract and incubated using shaking incubator at 100 rpm at 25° temperature for 10 d. After incubation, mycelia were separated using two fold muslin cloths under aseptic conditions and rinsed with sterilized double-distilled water. Mycelia were dried in hot air oven at 45° for 48 h and packed in sterile polypropylene bags in aseptic conditions [13].

Radical scavenging activity for the B. bassiana mycelia extracts was studied using 2,2diphenyl- 1-picrylhydrazyl (DPPH) purchased from Sigma- Aldrich. DPPH solution was prepared in methanol (4 mg/100 ml) and placed in the dark for overnight for release of free radicals. Three millilitres of DPPH solution was mixed with mycelial extracts of concentrations 10, 25, 50, 100, 250, 500, 750 and 1000 μg/ml and incubated for 20 min at 37° in a water bath and the decrease in absorbance was recorded at 515 nm was measured using spectrophotometer (Elico) against blank containing methanol in DPPH solution. The experiment was repeated for three times. Radical scavenging activity was calculated using the following Eqn. [15], percent inhibition = [(AB–AE)/AB]×100, where, AB is the absorbance of blank sample and AE is the absorbance of extract. Scavenging activity against the concentration of mycelia extracts was plotted and IC50 was determined.

Human lung carcinoma cell line (A-549) was obtained from NCIM, Pune and maintained on RPMI-1640 medium supplemented with 10 % fetal bovine serum amended with 10 U penicillin, 100 U streptomycin and incubated at 37°, 5 % CO2 was provided using CO2 incubator (Thermo Scientific) [16]. The cytotoxicity of the extracts was determined by testing on A-549 cell line. Colorimetric assay using sulforhodamine B (SRB) reaction was used for a quantitative measurement of cell growth and viability [17]. Cells (190 μl, 5×103 cells per well) were added in 96-well microtiter plates and were grown in a drug free medium for 18 h. Mycelium extracts (1 μg/μl) were added in aliquots of 10 μl (dissolved in DMSO/H2O, 1:9) and incubated for 48 h in CO2 incubator under 5 % CO2 and the cytotoxicity was measured by SRB methodology: cells were fixed by adding 50 μl of cold 50 % (w/v) trichloroacetic acid and incubated for 60 min at 4°. Plates were washed with deionized water and dried, 100 μl of SRB solution (0.4 % w/v SRB in 1 % acetic acid) was added to each microtiter well and incubated for 10 min at room temperature. Unbound SRB was removed by washing with 1 % acetic acid and plates were air dried. Add 100 μl of Tris buffer to dissolve bound strain. Optical densities were read on an automated spectrophotometric plate reader (Biorad) at a single wavelength of 560 nm. The activity of the mycelia extracts was given in percent growth inhibition (GI) for concentration tested (0.050 μg/μl) [18]. The experiment was repeated three times. 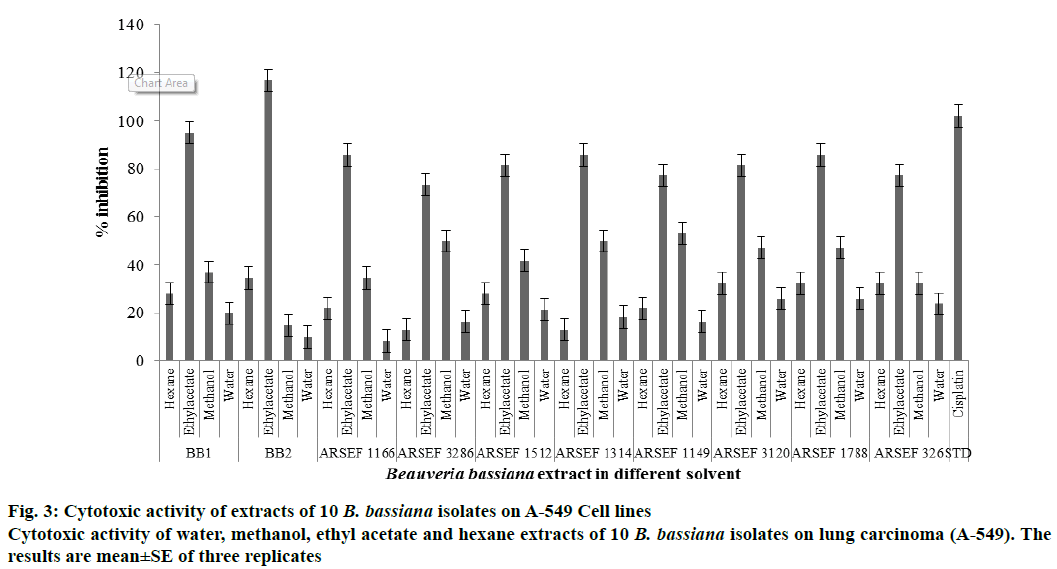 The authors thank Dr. Richard Humber, Insect Mycologist and Curator, ARSEF Collection of Entomopathogenic Fungal Cultures, Ithaca, USA for providing cultures. The authors also thank the help provided by the Management of GITAM (Deemed to be University) and Department of Biotechnology, GIT, GITAM University for allowing the use of their facilities to carry out the work.