This work was to investigate the hypoglycemic and antioxidant activities of the exopolysaccharides produced in a stirred-tank bioreactor by Inocutus hispidus. The exopolysaccharides showed significant antioxidant activities, up to 70.7±2.5% inhibition of hydroxyl radicals, 50% inhibition of 2,2-diphenyl-1-picrylhydrazyl radicals, and a Trolox equivalent antioxidant capacity of 3.3 mM. The exopolysaccharide also showed notable hypoglycemic effects in streptozotocin-induced diabetic mice, reducing the plasma glucose, total cholesterol and triacylglycerol concentrations by 18.2±1.5, 20.9±0.8 and 14.4±0.4, respectively. The results demonstrated the potential of this EPS for human health protection against oxidative damage and hyperglycemia.

Modern pharmacological studies have shown that fungi have a wide variety of medicinal applications. They comprise a vast and yet largely untapped source of powerful new pharmaceutical products and represent a source of polysaccharides with various bioactivities [1]. The antioxidant and hypoglycemic activities of exopolysaccharide (EPS) from submerged cultures of many fungi have been documented, which are hotspots of research on functional factors of health food and medicines with high efficiency and low toxicity [2,3]. Recently, submerged fermentation has received great interest as a promising technique for efficient production of EPS from fermentation broth of medicinal fungi [4,5]. As submerged cultures of medicinal fungi can give rise to higher productions of mycelial biomass and EPS in a more compact space, within a shorter period of time, and with less chance for contamination.

Inocutus hispidus is a famous Chinese medicinal fungus belonging to the phylum Basidiomycota, class Basidiomycetes, order Hymenochaetales and family Hymenochaeeceas. I. hispidus usually grows on the mulberry trees. I. hispidus has been found to possess hemostasia and acesodyne activities, and can treat hemorrhoids as well [6]. Ali et al. reported that the ethanol extracts of I. hispidus showed considerable antiviral activity against influenza viruses [7]. However, no information is available in the literature on the bioactivity of EPS by submerged culture of I. hispidus. In the present work, the EPS obtained from a stirred-tank bioreactor was evaluated for antioxidant activity in vitro and hypoglycemic activity in vivo.

I. hispidus was obtained from the Henan Province Microbiological Culture Collection Center (HPMCC no. 1976687). Stock cultures were maintained on potato dextrose agar (PDA) slants. The seed culture was grown in a 250 ml flask containing 50 ml of GP medium (0.3% peptone, 3% glucose) at 26° on a rotary shaker incubator (150 rpm) for 4 d [8]. 4% (v/v) of mycelial suspensions was carried out in a 5 l stirred-bank (Infors, Switzerland). The fermentations were performed under the following optimized conditions consisting of, sucrose 60 g/l and tryptone 5 g/l, and initial pH 8.0 at 25°, agitation speed 150 rpm, working volume 3 l, cultivation time 15 d.

A total 24 5-week old male Kunming mice was obtained from Henan Experimental Animal Center (Zhengzhou, China) were housed at 23° and fed with a commercial pellet diet (Henan Experimental Animal Center) throughout the experimental period. Mice were adapted for 7 days in the growth room and fasted for 12 h. Diabetes was induced by intramuscular injection of streptozotocin (STZ, Sigma Chemical Co., Louis, MO) dissolved in 0.1 M sodium citrate buffer (pH 4.5) at a dose of 50 mg/kg [11,12]. Two days after the injection of STZ, fasting blood glucose was determined and the mice with more than blood glucose >300 mg/dl were included in the group of diabetics. All procedures were conducted in accordance with the “Guide for the Care and Use of Laboratory Animals” approved by Zhengzhou University of Light Industry according to Guide for the Care and Use of Laboratory Animals by National Research Council (US) Committee [13].

All the animals were randomly assigned into three groups (8 mice/group), the normal group, normal mice received 0.9% NaCl solution; the control group in which STZ-induced diabetic mice treated with 0.9% NaCl solution, the diabetic EPS-treated group, diabetic mice high-treated with I. hispidus EPS at the level of 200 mg/kg using an oral feeding needle daily for three weeks. On the basis of our preliminary test result doses of 100 and 200 mg/kg and other experimental designs by several investigators who used natural agents for diabetic therapy in normal dose ranges, 100–300 mg/kg, hence, 200 mg/kg was chosen as a suitable dose for this experiment [2,14]. The animals had free access to food and water.

Data were expressed as mean±SD. The results were analyzed for statistical significance by one-way analysis of variance (ANOVA) test using the Statistical Package of the Social Science (SPSS) version 11.0 (SPSS Inc., Chicago, IL, USA). Group means were considered to be significantly different at P<0.05, as determined by the technique of protective least-significant difference (LSD).

The EPS of medical fungi had been demonstrated to play an important role as free radical scavengers in the prevention of oxidative damage in living organism and can be explored as novel potential antioxidants. Moreover, previous studies indicated that polysaccharides antioxidant activity might be closely related to chemical properties and structural characteristics of polysaccharides [3,17]. In this experiment, the in vitro antioxidant capacities of I. hispidus EPS were evaluated using different biochemical methods including hydroxyl, DPPH and ABTS radical scavenging assay. Hydroxyl radical was the most reactive among reactive oxygen species (ROS) and it bears the shortest half-life compared with other ROS. Among the oxygen radicals, hydroxyl radical was the most reactive and induces severe damage to adjacent biomolecules [18]. The results of hydroxyl radical scavenging assay were shown in fig. 1a. The OH– scavenging rate of I. hispidus EPS showed a steady increase with the concentration of EPS, and finally reached to 70.7±2.5% at the concentration of 10 mg/ml (still lower than the scavenging activity of vitamin C). The DPPH scavenging rate of EPS at 3.0 g/L reached to 50.38±0.5% (half of the scavenging activity of vitamin C, fig. 1b), and the TEAC of the EPS was 3.35±0.01 mM Trolox at the concentration of 4 mg/ml (fig. 1c). These results indicated that the EPS had potential antioxidant capacities. The antioxidant activity of polysaccharide is usually not influenced by one single factor but combined other factors. Up till now, however, the antioxidant mechanism of I. hispidus polysaccharides is not fully clear yet and it is an absolute necessity for the development of the correlation between the chemical characteristics and the antioxidant property of polysaccharide isolated from submerged culture of I. hispidus for further investigation. Polysaccharides derived from fungi have different capacity for carrying antioxidant activities because they have great potential for structural variability. Moreover, the antioxidant activities were closely related with solubility in water, molecular size, branching frequency and forms. 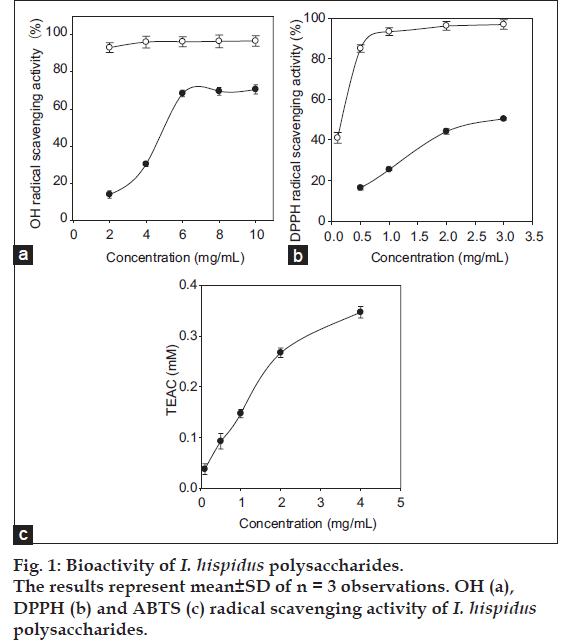 STZ-induced hyperglycemia has been described as a useful experimental model for studying the activity of hypoglycemic agents [22]. In this model, diabetes arises from irreversible destruction of the b-islet cells of the pancreas by STZ, causing degranulation or reduction of insulin secretion. In this study, the hypoglycemic effects of EPS from I. hispidus in STZ-induced diabetic mice were evaluated with respect to that of the saline administered control group. The organ weights of the experimental animals are showed in fig. 2. By the end of the experiment in week 3, the weight of liver decreased significantly by administration of EPS. However, the EPS treatment had no influence on spleen and pancreas weight, compared to the Normal and Control groups. The effect of EPS on the blood glucose level in STZ-induced diabetic mice over 3 week period is depicted in fig. 3a. The EPS produced a significant drop (18.2±1.5%) in blood glucose level. The hypoglycemic effect is possibly because of the increase in blood insulin level, which may be due to the induced insulin release from the residual pancreatic cells and/or reduced insulin metabolism in body [10,23]. 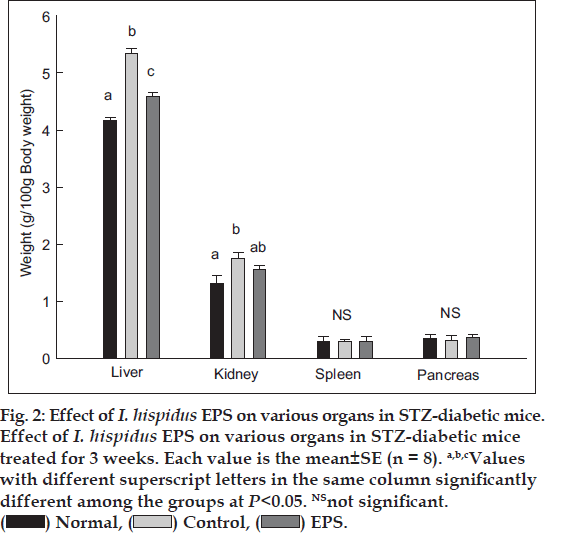 Figure 3: Effect of I. hispidus EPS on glucose and lipid levels in STZ-diabetic mice Effect of I. hispidus EPS on A. plasma glucose, total cholesterol and triglyceride levels and B. plasma HDL cholesterol, LDL cholesterol and atherogenic index in STZ-diabetic mice treated for 3 weeks. Each value is a mean±SE for 8 mice. a,b,cValues with different superscript letters in the same column significantly different among the groups at P<0.05.

The experiments in vitro indicated that I. hispidus EPS exhibited high antioxidative effects. The EPS had notable hypoglycemic effects in STZ-induced diabetic mice, suggesting that the EPS may stimulate pancreatic release of insulin and/or reduce insulin metabolism. Further pharmacological and biochemical investigations are, however, needed to elucidate the mechanisms of hypoglycemic action of the I. hispidus EPS, and to analyze the active compounds.

This work was supported by the National Science Foundation of China (Grant No B060806).