Diseases characterized by recurrent seizures are known as epilepsy. One of the most important mechanisms for handling it is GABA1receptor mediated inhibition. In the same context while studying the treatment of epilepsy we observed significant effects by derivatives of sulfonamides, which prompted us to design novel derivatives by means of in silico resources with antiepileptic effects. Molecular docking approaches are routinely used in modern drug design to help understand drug–receptor interaction. This study has been performed with the help of Chemdraw Ultra 7.0, GUSAR online tool for IC50and LD50predictions, AutoDock Vina (Python Prescription 0.8), and PaDEL software. Results revealed that ligand-protein interaction affinity of all 10 designed molecules ranges from -5.7 Kcal/mol to -5.2 Kcal/mol, which is approximately comparable to pre-existing GABA1inhibitor i.e. phenytoin (CID: 1775, ligand-protein interaction affinity is -6.5 Kcal/mol).

Epilepsy is a serious neural disease that affects around 50 million people throughout the world [1]. Epilepsy is the term used for a group of disorders characterized by recurrent spontaneous seizures that apparently result from complex processes including several neurotransmitter systems such the glutamatergic, cholinergic, and GABAergic system. Actual estimations of the prevalence rate for epilepsy are 1–2% of the world population [2]. Epilepsy is common, sudden, and transient episodes (seizures) of loss or disturbance of consciousness. Usually, but not always with the characteristic body movements (convulsions) and sometimes related with autonomic hyperactivity. It correlates with an abnormal electrical discharge [3].

Although it has a high prevalence among people of all ages, is a serious and diverse set of chronic neurologic disorders characterized by sudden and unexpected occurring seizures. In a recent study, the age-adjusted lifetime prevalence of epilepsy ranged from 2.2 to 41.0 per 1,000 persons, whereas the age-adjusted annual incidence ranged from 16 to as high as 111 per 10,000 persons [4].

Glutamate is the major excitatory neurotransmitter in the brain, AMPA receptors (AMPARs) represent a validated target for AEDs’(antiepileptic drug) development. Evidences support their role during seizures and neurodegeneration [5].

The ionotropic glutamate receptors are a family of ion channel that are divided into the three subtypes N-methyl asparate (NMDA), (s)-2-amino-3(3-hydroxylmethyl- 4-isoxazoleyl) propionic acid (AMPA), and kainite receptors. The channels are permeable for sodium, potassium and calcium and mediate excitatory synaptic transmission. Over-stimulation of these receptors causes an uncontrolled Ca-influx into the cells resulting in excitotoxicity and possible cell death. Several disorders are at least in part-linked to over activity of iGluRs, such as epilepsy, chronic pain or neuropathology ensuing from cerebral ischemia or cardiac arrest. Different types of antagonists acting at various sites of these receptors were shown to have anticonvulsant, neuroprotective or antinociceptive effects in a range of animal models [6].

The quinazolinedione sulfonamides represent a novel class of competitive AMPA receptor antagonists, displaying nanomolar affinities and providing examples- albeit of lower affinity with oral activity in animal models for anticonvulsant effects. Quinazoline-2,4-diones with a sulfonamide group attached to the N(3) ring atom constitute a novel class of competitive AMPA receptor antagonists [7]. AMPA receptors have been associated to a variety of neurodegenerative and psychiatric diseases such as ischemic brain damage, amyotrophic lateral sclerosis, schizophrenia and epilepsy. Excessive stimulation of the glutamatergic system often plays a role in triggering seizures associated with epilepsy [8].

The use of in silico methods in drug design has grown significantly in popularity over the past couple of years. This in silico structure-based design is rapidly becoming the lead identification cornerstone of many drug discovery processes. Structure-based in silico methods fall into two main categories–virtual screening and de novo design. The most well-known tools are AutoDock, AutoDock Vina and DOCK3, although there are many different commercially available software programs, each encapsulating slightly different theories of the most accurate way of representing a ligand binding to its receptor [9]. An imbalance between the excitatory and inhibitory neurotransmitters is responsible for seizures. At neuronal level, seizure activity often occurs when glutamatergic excitatory neurotransmitters overrides gamma-aminobutyric acid (GABA) mediated inhibition [10].

The GABA, since long has been considered to be the principal inhibitory neurotransmitter in the mammalian brain [9]. GABA is one of the main inhibitory neurotransmitters in the brain, interacts with three types of receptors as GABAA, GABAB and GABAC. GABAA receptors, associated with binding sites for benzodiazepines and barbiturates in the form of a receptor complex, control opening of the chloride channel. When GABA binds to the recognition site on the GABA1, receptor complex, the channel is opened and chloride anions enter the neuron, which is finally hyperpolarized [10].

For carrying out the study, National Center for Biotechnology Information’s (NCBI) website and Protein Data Bank’s (PDB) website were used as receptor sources. For designing and optimizing the geometry of the derivatives, Chemdraw Ultra 7.0 [13] was used. For antitarget interaction profile prediction and rat acute toxicity prediction, the online service available as Gusar online software has been employed [14]. For docking studies of derivatives, AutoDock Vina [15-17] molecular docking software has been employed and for descriptor calculations PaDEL software has been used [18].

The chemical structures of the derivatives (fig. 1) were drawn using ChemDraw Ultra 7.0 and energy minimization of derivatives was achieved with Chem3D Pro of ChemOffice suit for taking energy of each molecule up to its lowest energy state (highest stability). 3D structure of phenytoin (CID: 1775) was retrieved from PubChem compound database at NCBI. 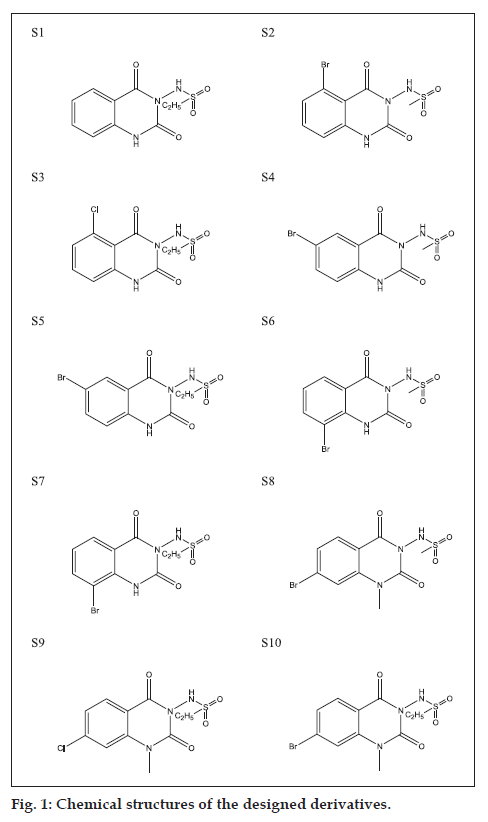 For antitarget interaction profile prediction and rat acute toxicity predictions, the GUSAR online software has been employed which is based on the PASS prediction.

The docking analysis of quinazolinedione sufonamide derivatives with GABA1 was carried out by AutoDock Vina [19]. The incorporation of various algorithms makes it a very good tool, as docking search algorithm is based on evolutionary algorithm. It is an iterative optimization technique inspired by Darwinian evolution theory. Evolutionary algorithm consists of population of individuals, which is exposed to random variation by means of variation operators, like mutation and recombination.

After passing the designed compounds through online predictive software, we have found some interesting results, which are described here. Based on the GUSAR online software results, on an average 8 targets have been found to be effective out of 32 employed targets. As per the requirements, we have selected 1 target to work with out of 8 effective targets i.e. sodium/chloride-dependent GABA transporter and predictive value of their IC50 and mole have been extracted and summarized in the Table 1. After analysing the above table we have found that the IC50 value of the novel designed compounds ranges from 0.6020 to 0.6989.

The acute median lethal doses of novel designed quinazolinedione sulfonamde derivatives (S1 to S10) have been estimated in rats for different route of administration. Difference in LD50 values obtained for different routes suggests that availability of compound for metabolism by liver is a major factor in their toxicity.

In silico prediction of LD50 values for rats with four types of administration (oral, intravenous, intraperitoneal, subcutaneous, inhalation) by GUSAR software are given below (Table 2).

The docking analysis of binding site shows that SER297 and TRP315 could be the catalytic site residue. The protein-ligand interaction affinity of designed inhibitors was given by AutoDock Vina for best pose of novel inhibitors. The best pose ligand-protein interaction affinity of 10 molecules was found to be as -5.6, -5.2, -5.6, -5.4, -5.6, -5.4, -5.7, -5.4, -5.7 and -5.7 Kcal/mol, respectively. Here, negative values for interaction energy would reflect the positive docking approach. Number of hydrogen bonds and other binding details are given in Table 3 and docking image is given in fig. 2. 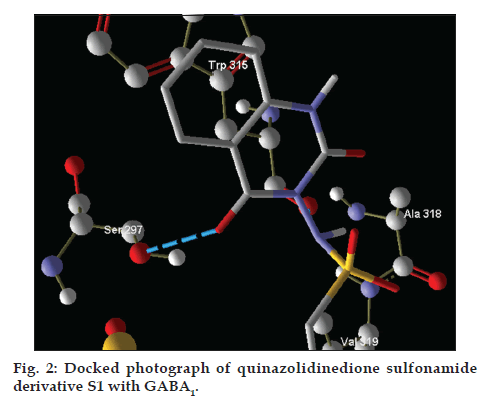 After analysing the docking results we have found that the interacting amino acids for binding of designed molecules (S1-S10) are serine-297 and tryptophan-315, but when we analyse the interacting amino acids for standard drug that is CID-1775 these are cystein-320 and phenylalanine-316. This implies that novel designed molecules have different binding site as compared to CID-1775.

On docking studies and docking analysis of phenytoin with the GABA1, interacting residues (amino acids) are found as CYS320, PHE316 (fig. 3) as catalytic domain for the GABA1, so, there are possibilities of making it with antiepileptic profile. 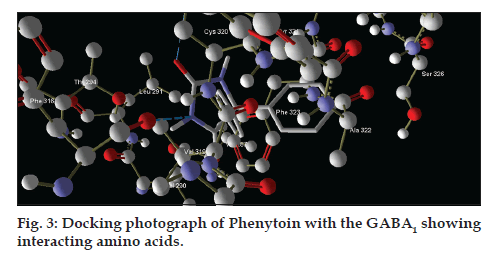 On docking analysis, the docked poses of all novel designed quinazolinedione sulfonamide derivatives does not superimposes the phenytoin, a preexisting GABA1 inhibitor which can be clearly seen in fig. 4, but then also the docking analysis shows that they nicely docked with protein in the domain other than the catalytic domain. All 10 novel designed quinazolinedione sulfonamide derivatives have been gone through some descriptor calculation, which are listed in Table 4. 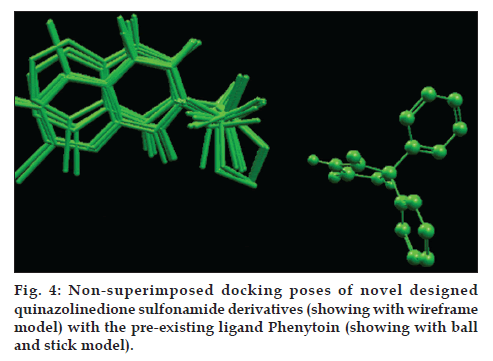 In silico studies of the designed quinazolinedione sulfonamide derivatives proved them to be potential GABA1 inhibitors. Although a systemic biochemical study is necessary to confirm the findings. When designed sulfonamide derivatives were docked with GABA1 then designed molecules were found to be nicely docked, so it could be concluded that these derivatives may be proved the good inhibitors of GABA1 for the antiepileptic activity. On comparing the chemical structure of designed derivatives with phenytoin, a preexisting GABA1 inhibitor; there is no structural similarity found, so it is concluded that this system may proved a novel class of this category.