Several mechanisms that lead to in situ gel formation namely, solvent exchange, UV-irradiation, ionic crosslinkage, pH change, and temperature modulation have been reported for design of drug delivery systems. Herewith we have investigated a novel approach Aqua-triggered In Situ (ATIS) gel formation wherein water acts as the trigger for gelling. Zolmitriptan (ZLT) a potent antimigraine agent exhibits low (40%) oral bioavailability [1]. Nasal drug delivery system of ZLT could provide the dual advantage of enhanced bioavailability with rapid onset of action. The objective of the present work was the design and evaluation of ATIS gel formation in the design of in situ gelling micro emulsion (ME) based nasal sprays of ZLT.

Pseudo-ternary phase diagrams were constructed using water titration method at ambient temperature (25°) to determine the ME regions and gelling regions. PVD-O was selected as oil phase, PVD-S as surfactant and PVD-CoS as co-surfactant. The weight ratios of PVDS to PVD-CoS were varied from 1:1, 2:1, 3:1 and 4:1, respectively. The ME region and ME gel region were identified.

ZLT and excipient were dissolved in water, surfactant, and co-surfactant mixture and mixed with oil. The concentration of surfactant, co-surfactant and water were fine tuned to obtain sprayable ME which exhibit ATIS gel formation.

Drug content was monitored by UV spectroscopy at 284 nm. ATIS gelling was determined by spraying the ME using VP 50 spray nozzle on an artificial mucin film supported on a filter paper. The resistance of the sample to flow was monitored by holding the mucin film at 180° facing downwards. The ME (colored with a dye) were sprayed using the Valois VP 50 µl nozzle on white filter paper to assess the spray pattern. The Beckman Coulter N4plus particle size analyzer was used for globule size determination. The effect of pH on ME formulations for ATIS Gel formation was evaluated at different pH (5-7) and SMEDDS as control. Bioadhesion was evaluated by a modified balance method designed in house.

MEs are known to exhibit gel formation under certain conditions [2]. ATIS gel formulation is based on design of sprayable ME at the phase boundary of the gel region such that further contact with water (aqua) triggered gel formation. Accordingly ZLT loaded ME were prepared by selecting appropriate concentrations of ME components. Pseudo ternary phase diagram representing the high viscosity and gel regions are depicted in figs. 1 and 2. As the surfactant concentration increased the gel region increased. Fig. 1: The pseudo-ternary phase diagram for the mixture of PVD-O, PVD-S:PVD-CoS (2:1) and water.
The region indicated in gray represents the high viscosity region and the region in black the gel region 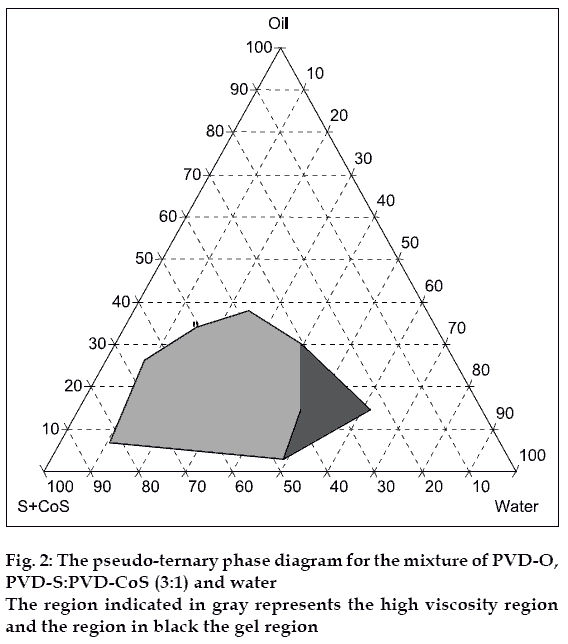 Fig. 2: The pseudo-ternary phase diagram for the mixture of PVD-O, PVD-S:PVD-CoS (3:1) and water.
The region indicated in gray represents the high viscosity region and the region in black the gel region

Microemulsion samples that revealed ATIS gelling when sprayed on artificial mucin film did not drip, while SMEDDS of the same ME formulated without water tends to drip from the mucin film as they did not gel. The globule size of the ATIS gel was in nanometer range. The globule size decreased with increased concentration of surfactant. Good and uniform spray pattern was observed. ATIS gelling was seen to be independent of pH and some ME formulations remained as gel up to 12 h. ATIS gel formulations (G3) showed higher bioadhesion as seen in fig. 3. Aqua-triggered in situ (ATIS) gel formation is an innovative approach in drug delivery. It provides the technological advantage of sprayable DDS which gel in situ and the bioavailability advantage, as the ATIS gels are microemulsion based DDS. 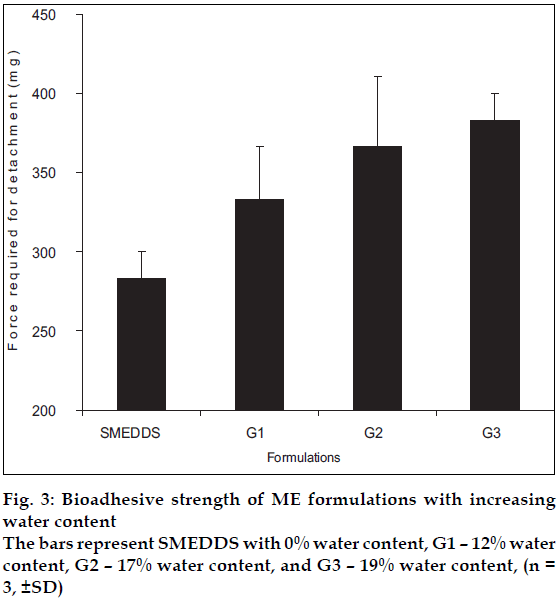