This study was performed to assess the bioequivalence of fexofenadine 120 mg+montelukast 10 mg fixed dose combination (Allegra™ M) with separate formulations of fexofenadine (Allegra™) and montelukast (Singulair®) administered concurrently at the same dose levels. This was a randomized, open-label, two-treatment, two-period, two-sequence, single-dose, crossover study in 60 healthy adult men under fasting conditions. Initially, 30 subjects received a single oral dose of fexofenadine Allegra M combination tablet, while the remaining 30 subjects received concurrent single oral doses of fexofenadine 120 mg and montelukast 10 mg tablets. After a 10 d washout period, subjects crossed over to the alternate treatment. Plasma concentrations of fexofenadine and montelukast were determined using a liquid chromatography coupled to tandem mass spectrometry single assay method; the lower limit of quantitation for both the analytes was 2.00 ng/ml. Of the 60 subjects included, 57 completed both periods of the study. The 90% confidence interval for the geometric mean ratio of maximum concentration, area under the concentration-time curve from 0 to interval t, and area under the concentration-time curve from 0 to infinity were within the range of 80-125% for both fexofenadine and montelukast in the test and reference products, indicating bioequivalence between the fixed dose combination and individual components. Six subjects (three in each group reference and test) experienced six adverse events. The most frequently reported adverse event was vomiting, reported by four subjects. All the adverse events were reported as possibly related to the test product, and no serious adverse events were reported. Allegra M fixed dose combination was bioequivalent to the individual components of the same strength administered concurrently.

Fexofenadine is a second-generation non-sedating H1-antihistamine with greater selectivity for the H1 receptor [9]. The efficacy and safety of fexofenadine has been demonstrated by clinical studies in adults with allergic rhinitis [10,11]. Montelukast, an LTRA, has similar benefits as antihistamines when used as monotherapy for the treatment of seasonal allergic rhinitis [8]. In the pathophysiology of allergic rhinitis, histamines are responsible for several symptoms of the disease, including rhinorrhoea, nasal itching and sneezing. In contrast, leukotrienes mainly cause increases in nasal airway resistance and vascular permeability. Hence, blockade of these two mediators by antihistamines and LTRAs, respectively, may provide additional benefits as compared to inhibition of a single mediator alone. Furthermore, since compliance is an important factor (along with environmental control, appropriate pharmacologic treatment and allergen immunotherapy) for optimal medical management and best outcomes in allergic rhinitis [12], administering an LTRA plus an antihistamine in a single tablet may improve patient compliance [13].

Healthy, non-smoking men, with no history or presence of significant alcoholism or drug abuse in the past 1 y, aged 18-45 y, with a body mass index (BMI) of 18.5-24.9 kg/m2, who were willing to follow protocol requirements and sign a written informed consent were included in the study. Subjects were excluded if they had taken medicines having cytochrome P-modifying activity within 28 d prior to study dosing or aluminum or magnesium-containing antacids within 24 h of study medicine consumption; had any systemic abnormality or history or presence of medical or surgical condition that might have significantly interfered with gastrointestinal functions; or had participated in a clinical drug study or bioequivalence study within 90 d prior to the present study.

All subjects underwent a screening procedure within 20 d prior to the first dosing comprising clinical examination (vital parameters and physical and systemic examination), electrocardiogram and blood and urine tests. Chest X-ray (posteroanterior, P/A view), taken within 6 months prior to the first study dosing, was considered for assessment.

This was an open-label, randomized, two-treatment, two-period, two-sequence, single-dose crossover bioequivalence study conducted between May and June 2012. The analysts were blinded to the sequence of administration of the test and reference formulations until analysis was completed. Veeda Clinical Research Pvt. Ltd. generated the allocation sequence, enrolled participants and assigned participants to their treatment groups.

The total duration of the study was 14 days from the day of admission for the first period up to the end of the second period. Upon enrolment, subjects were confined to a clinical facility in Ahmedabad, India, to ensure overnight fasting for 10 h before the scheduled time for dosing and were continued to be housed in the facility up to 48 h after dosing in each of the two periods. A urine analysis for drugs of abuse was performed at admission for each period. The alcohol breath test was performed during screening and at admission for each period. A washout period of 10 days was maintained between consecutive dosing periods.

All subjects were randomized using statistical techniques (in blocks using a PROC plan such that the design was balanced) to receive one of two study drugs: either test (T) or reference (R1 and R2) products as per the schedule shown in Table 1. The test product was a FDC tablet of fexofenadine hydrochloride 120 mg and montelukast 10 mg manufactured by Sanofi (India) Limited, whereas the reference products were Allegra™ (fexofenadine 120 mg) tablets manufactured by Sanofi (India) Limited and Singulair® (montelukast 10 mg) tablets manufactured by Merck Sharp and Dohme (Australia) Pty. Limited, Australia.

During screening, subjects were instructed to refrain from smoking, chewing tobacco and from consuming alcoholic products, grapefruit juice, and xanthinecontaining foods or beverages (e.g. chocolates, tea, coffee or cola drinks) from 48 h prior to dosing until the last blood sample collection in each period. Subjects were not allowed to have the same from admission till discharge in each period. Both test and reference products were administered orally, in sitting posture, with 240 ml of water, after a 10 h overnight fast; fasting was continued for 4 h after the dose. Compliance for dosing was assessed through a thorough check of the oral cavity using torch and disposable spatula immediately after dosing of the study product.

A total of 24 venous blood samples were collected during each period. The pre-dose blood sample of 4.0 ml was collected 1 h before dosing and the postdose blood samples of 4.0 ml each were drawn at 0.25, 0.50, 0.75, 1, 1.25, 1.50, 1.75, 2, 2.33, 2.67, 3, 3.50, 4, 4.50, 5, 6, 8, 10, 12, 16, 24, 36 and 48 h after dosing in each period. Collected samples were transferred to sample separation area where they were centrifuged and separated within 60 min from the last sample collection for that particular time point. Study personnel centrifuged the samples at 4000 rpm for 10 min at 4° (short term excursion was permitted up to 8°). All plasma samples were aliquoted into two pre-labeled (Project No., Subject No., Period, Sampling time point and Sample code) CRYO vials. In first CRYO vial (aliquot 1) approximately 0.75 ml of plasma was transferred and in second CRYO vial (aliquot 2) remaining plasma was transferred. Within 1 h from the last sample collection for that particular time point, CRYO vials were to be stored at or below -20° till the completion of period and then at or below -70° until analysis. However, a deviation had to be made to the protocol as plasma samples of the first period could not be stored at or below -70° after completion of study period due to insufficient storage space in the deep freezer of the bio-analytical facility. The plasma samples of period 01 were transferred at -78±8°, along with plasma samples of period 02 after completion of clinical phase of the study. Before transfer, plasma samples were stored at -28±5°. This deviation did not impact the study outcome as long term stability of fexofenadine and montelukast in plasma was proven for 43 days at -20±5°.

A validated high-performance liquid chromatographyelectrospray ionization-tandem mass spectrometry (HPLC-ESI-MS/MS) bioanalytical method developed for the quantification of fexofenadine and montelukast in plasma was employed for sample analysis. The lower limit of quantitation for the two analytes was 2.00 ng/ml.

The primary outcome measure was achievement of the 90% CI of the geometric mean ratio of Cmax, AUC0-t and AUC0-∞ between test and reference products within the range of 80-125% for fexofenadine and montelukast.

Assuming a true ratio of 95% and an intra-subject variability of 30%, a sample size of 52 subjects was required to conclude bioequivalence between the two products with a power of 90%. After accounting for dropouts, it was decided to enrol 60 subjects. Using SAS version 9.2 (SAS Institute Inc., USA), analysis of variance (ANOVA), ratio analysis, 90% CI, power and intra-subject variability were calculated and reported for log-normal (ln)-transformed pharmacokinetic parameters (Cmax, AUC0-t and AUC0-∞) of fexofenadine and montelukast. ANOVA was performed on nontransformed Tmax, Kel and t½ values. The median difference in Tmax between the products was analysed using the non-parametric Wilcoxon signed rank test.

Table 2: Pharmacokinetic Parameters of Fexofenadine and Montelukast from test and Reference Products

The mean plasma concentration of fexofenadine and montelukast following administration of reference and test products is shown in Figures 1 and 2, respectively. The mean time needed to reach maximum concentration (i.e. Tmax of fexofenadine in test product) was significantly lesser (2.3 h) compared to the reference product (2.8 h) (Wilcoxon signed rank test, P=0.044), whereas the mean Tmax of montelukast in the test product (3.5 h) was similar to that of the reference product (4 h; P=0.960). 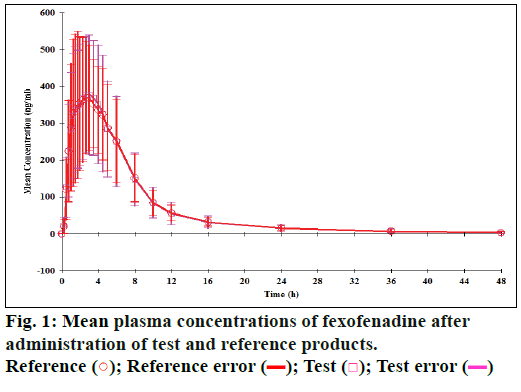 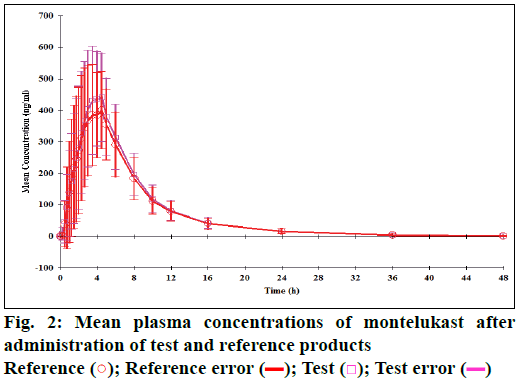 For the safety analysis, data of all subjects who received at least one study medication were considered. Out of 60 subjects, 56 completed both the periods of the study. Three subjects were withdrawn from the study due to vomiting. A total of six subjects reported six AEs in the study. Four subjects reported vomiting (two in the test group and two in the reference group) and nausea was reported by one subject in the reference group. In one subject, who was on reference product in period 1 and test product in period 2, at 48 h after dosing in period 2, the SGOT and SGPT values increased to 150.43 U/l and 109.30 U/l, respectively. This was reported at the post-study safety assessment. All AEs were mild in nature and were reported as possibly related to the test product. No serious AE was reported during this study and all patients had normal vital signs.

The safety of fexofenadine is well established. It is well tolerated, with a placebo-like AE profile. Headache is the most commonly reported AE in clinical trials. Fexofenadine is not associated with prolongation of the QTc interval. As it does not cross the blood-brain barrier (BBB), it is not known to cause sedation [9]. Montelukast has a satisfactory safety profile in adults and children. In general, the AE profile of montelukast has been found to be similar to that of placebo, with studies indicating that there is no clinical or laboratory difference in the AE profile of montelukast and placebo [8].

In conclusion, fexofenadine 120 mg+montelukast 10 mg FDC was bioequivalent to individual tablets of fexofenadine and montelukast of the same strengths administered concurrently. No serious AEs were observed with fexofenadine 120 mg+montelukast 10 mg FDC. The tolerability of the FDC was comparable to that of the co-administered individual components. With the availability of an FDC tablet, patients suffering from allergic rhinitis will have a more convenient option to improve treatment compliance and adherence.

The study was funded by Sanofi.

The authors of this manuscript are employees of Sanofi India.