Poison is a substance that causes damage or injury to the body and endangers one’s life due to its exposure by means of ingestion, inhalation, or contact [1]. Worldwide various agents such as agrochemicals, drugs or environmental agents are used as poisoning agents [2]. Worldwide intentional poisoning is one of the important causes for mortality and morbidity [3]. Exposure to agrochemicals, medicines and environmental agents are the major causes of poisoning. Distress due to loss in the business, failure in romance or differences with the intimate partner, or examination, emotional disturbances and chronic diseases are the common reasons for intentional poisoning [4].

World Health Organization (WHO) estimated 0.3 million people die every year due to various poisoning agents [5]. Acute pesticide poisoning is one of the most common causes of intentional deaths worldwide [6]. High doses of analgesics, tranquillizers, and antidepressants are the commonly used agents for intentional poisoning in industrialized countries [7] and agriculture pesticides are used in Asian region for self poisoning particularly in rural areas with a fatality range of 10-20% [8]. Majority of pesticide exposure is seen more in middle and low income countries due to increased use of agrochemicals in agricultural sector [9].

Studies have revealed that pesticides are the commonly used poisoning agents for intentional poisoning in India [10]. As agriculture is major profession in the rural part of India farmers stock the pesticides to eradicate the weeds and pests. Due to easy availability of the pesticides, they are commonly used by the individuals to end their life in stressful situations [11].

Mysore is a South Indian district where agriculture is the major occupation in rural Mysore. JSS Medical college hospital is a 1000 bed tertiary care, multi speciality teaching hospital catering to the health requirements of urban and rural population. Many rural patients get admitted to emergency department of JSS Medical College hospital due to poisoning. Department of Clinical Pharmacy frequently receives queries from emergency department pertaining to the antidotes for treating various poisoning agents. The present study was initiated to analyse the incidence and mortality rate of the poisoning cases admitted to the hospital to develop treatment protocols.

The present study was a retrospective and prospective study conducted over a period of nine months. Case records of poisoning cases from January 2005 till January 2008 were reviewed retrospectively and prospectively from January 2008 to September 2009. A specially designed data collection form was used to collect the details of patients’ demography, type of poisoning agents consumed, method of poisoning (oral, inhalation, dermal or eye exposure), name of the poison consumed, quantity consumed, route of exposure, first aid rendered, signs and symptoms, investigations done, treatment given, specific antidote given, complications developed, treatment outcomes and events of mortality and the reasons for the mortality. The study was approved by the institutional ethics committee. 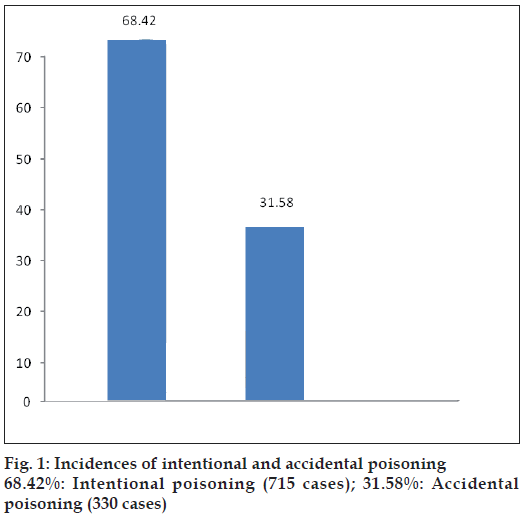 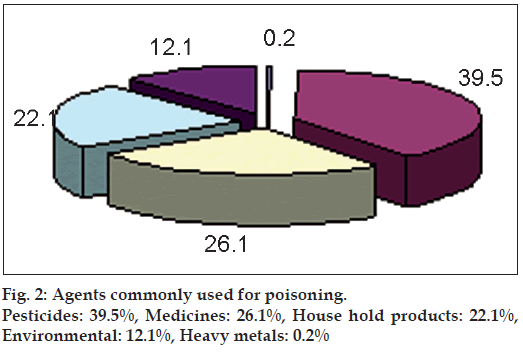 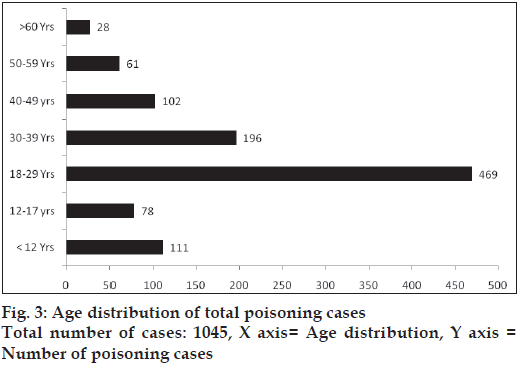 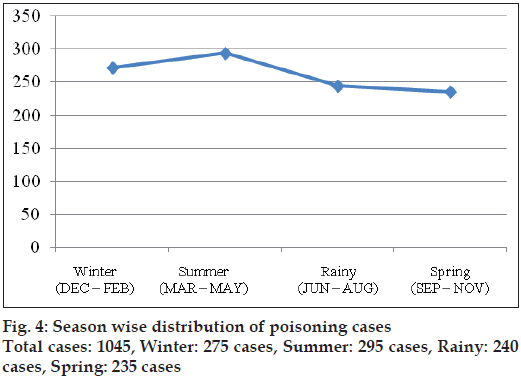 House hold products related poisoning was observed in children and most commonly used agents were hydrocarbons (68.35%) followed be phenyl (16.4%), naphthalene, (3.69) castor seed, caustic soda, acetone and hair dye, bleaching powder (1.03%), and 5.06 % cases were seen due to unknown liquid. There were two cases of heavy metals induced poisoning. One was due to arsenic and other one was due to copper. Environmental poisoning was seen more due to snake bite, followed by stings (bee, scorpion) and insect bite (fig. 5). 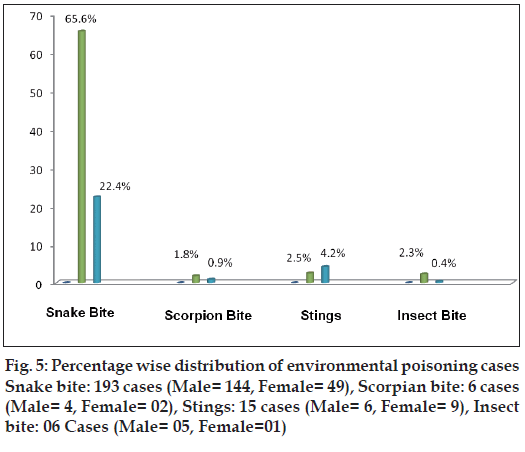 Among the poisoning related admissions 84.4% of patients recovered, whereas in 7.6% of cases condition was not improved, mortality rate was found in 4%. The details are shown in Table 1. Majority of deaths were seen in adults and only few deaths were reported in children. Results of the same are presented in Table 2.

Various national and international studies have projected the raise of incidence of intentional poisoning cases [11-13]. During the study period a total of 1045 cases were collected with an average of 20-30 cases per month. The results of the study report that the incidence of poisoning was seen more in adults than children. Most commonly used route for poisoning exposure was oral followed by inhalation and dermal exposure. Intentional poisoning was seen more in adult male group because they are more often exposed to the stress and strain in their profession in work places and in day to day life. Most of the poisoning was seen in younger adult age group i.e. 18-29 years. The possible reasons for increased poisoning in this age group may be because of problems in family, studies, marriage, life settlement and employment which may themselves stressed and this may make them to attempt to suicide. In adolescence age, majority poisoning cases were seen in girls than boys due to stress factors like family arguments, love failures, failure in studies and mental conflicts [7].

Several studies have reported that pesticides were the most commonly used agents for poisoning in Asia Pacific Regions. Even our study findings also shows that pesticides contributed for the maximum poisoning cases and associated with high mortality rate followed by drugs 21.8% and household products 7.6% [10-12]. India is a county, where agriculture is the prime profession for majority of people in rural areas and pest control is one of the most common problems faced by the farmers in agriculture. In order to eradicate the weeds and pests farmers procure and keep pesticides at their houses. Because of easy availability of the pesticides people are tend to use them for intentional poisoning. Apart from pesticide poisoning, the other common types of poisons used were medicines like benzodiazepines, analgesics, anti depressants and barbiturates. Medicines are used as poisoning agents for intentional poisoning in developed countries [7] and urban areas of India. In certain places, street drugs and OTC medicines like paracetamol, antihistamines are also used for intentional poisoning [15,16].

House hold products induced poisoning was seen more in children of age less than 5 years. Most commonly used agents are hydrocarbons, phenyl, and other corrosive agents. Accidental poisoning in children is more seen in males, because children at this age become more curious in their newly acquired hand skills and mobility due to their exploratory, active and restless behaviours than the female children. Negligence or unawareness from the parents and caretakers is one of the main factors in making the environment of the child favourable for poisoning. Majority of poisoning takes place in small houses because of lack of space where chemical or disinfectants or other house hold products will be kept which would be in easy reach of children, which is considered as another reason for accidental poisoning in children.

Poisoning incidence also varies according to the seasons. Incidence was seen more in summer season followed by the winter season. Incidences of poisoning during summer months, are more because as the summer days being longer and during which the person becomes easily fatigued and exhausted as a result of extreme heat conditions leading to mental imbalance. Other reason may be the preservation of grains during summer is more and in order protect them pesticides are procured and preserved [9]. Due to the easy accessibility to pesticides, people may try to consume the pesticides to end their life when they suffer from economic burdens or any emotional conflicts.

The reasons observed for the mortality in poisoned individuals were the delay in admission to hospital, improper management of the poisoned patient, lack of information regarding the poison agent and its antidote. To reduce the poison induced morbidity and mortality following steps such as having a centralised poison information centre, availability of standard treatment protocols for managing various poisons, and educational programs for rural people may be more appropriate.