Irritable bowel diseases (IBD) including ulcerative colitis (UC) is disorder with recurrent inflammatory involvement of large intestine. In UC, the colon becomes inflamed, often causing recurring abdominal pain including diarrhoea, blood in the stool and weight loss. Though exact etiology and pathophysiology is not known with certainty but genetic, immunological, reactive oxygen species (ROS) and environmental factors play a crucial role in the development of UC[1].

Azadirachta indica (Malvacea, AI) is popularly known as neem in the Indian subcontinent. Various parts of the neem tree like leaves, flowers, seeds, fruits, roots and bark have been used traditionally for the treatment of inflammation, microbial infections, antiseptic and skin diseases. Antiinflammatory, antiarthritic, hypoglycemic, antiulcer, antifungal, spermicidal, antibacterial, diuretics, antioxidant and immunomodulator actions have been reported in the extract of AI[2]. Considering the traditional uses of AI, the role of oxidative stress in the pathogenesis of UC and the presence of a number of compounds with antioxidant and anti−inflammatory properties prompted us to investigate the healing effect of 50% ethanol extract of dried leaves of AI (AIE) on trinitrobenzene sulfonic acid (TNBS)−induced colitis in rats.

AI leaves were collected in the months of March to May from Ayurvedic Gardens, Banaras Hindu University. A total of 50% ethanol extract, of shade dried and powdered AI leaves (AIE), was prepared by cold decoction and the % yield was 10.2 (w/w).

Rats were given intracolonic normal saline (NS, 0.4 ml/rat, negative control) or TNBS alone (40 mg/0.4 ml of 40% ethanol/rat)[3] or intracolonic TNBS plus oral AIE (test extract) or standard colitis protective drug, SS (positive control). AIE (500 mg/kg)[4] and SS (100 mg/kg)[5,6] were suspended in 0.5% carboxymethyl cellulose (CMC) in distilled water and given orally, once daily for 14 days after induction of colitis with TNBS. Diarrhoea, food and water intake and body weight changes were calculated from their respective day 0 value and compared at day 7 and 14 of the experiment between TNBS and TNBS+AIE/SS groups.

The animals were killed on 15th day of experiment. Pathological changes (macroscopic) were seen by examination of 8 cm distal part of rat colon for severity and number of ulcers in terms of tissue damage score, thickening and adhesions[3]. A piece of colon was fixed in 10% buffered formalin and paraffin embedded. 4−6 μm thick sections were stained with haemotoxylin and eosin stain for histological evaluation.

Adult Swiss albino mice of either sex, weighing between 25 to 30 g fasted overnight, were used for acute toxicity study. Suspension of AIE was orally administered at 2 g/kg start dose (4 times of the optimal effective dose of 500 mg/kg) to mice. Subsequent to AIE administration, animals were observed closely for first 4 h, for any toxicity manifestation, like increased motor activity, salivation, convulsion, coma and death. The animals were under further investigation up to a period of 14 days[14]. 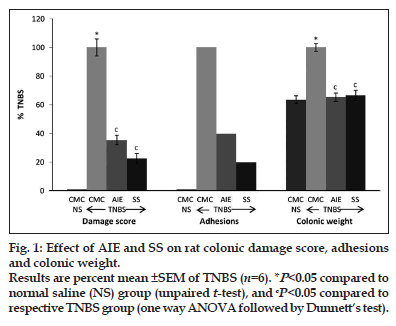 Azadirachta indica extract even at 2 g/kg oral single dose did not show any acute toxicity manifestation like increased motor activity, salivation, colonic convulsion, coma and death, observed up to a period of 2 week.

The diarrhea and weight loss with TNBS could be due to alterations in the GIT absorptive functions produced, either directly or indirectly by products released from activated mast cells[15]. Treatment of colitis rats with AIE therefore reduced the colonic damage with concomitant increase in body weight, decrease in diarrhoea, fewer incidences of adhesions and decreased lympho−plasmacytic infiltration indicating healing effects in TNBS−induced colitis. TNBS has been reported to cause chronic inflammation of colon with changes in inflammatory mediators like prostaglandins, leukotrienes, platelet activating factor, MPO and interleukins[16]. Experimental and clinical evidences suggest that the inflamed colon undergoes substantial oxidative stress by neutrophils derived oxidants and MPO activity, both of which contribute markedly to tissue damage during chronic intestinal inflammation[17]. Increase in ROS and NO production and impaired antioxidant defense mechanisms are postulated to be causative factors in inflammatory diseases. Therefore, elimination of ROS could be an important strategy in treatment of colitis and antioxidants have been postulated to hasten the process of healing by destroying the free radicals[18]. TNBS−treated animals showed decrease in antioxidants and increase in free radicals levels and myeloperoxidase activity compared to NS−treated rats, while AIE possessed significant antioxidant activity reducing free radicals stress and decrease in colonic MPO activity which helped to prevent oxidative damage and promote the healing process.

AI contains important bioactive compounds such as phytosterols (sitosterols, sigmasterol, and campasterol) and flavonoids (rutin and quercetin), commonly known for their antioxidant activity, antiinflammatory and antimicrobial activities[4]. Role of microbial content of the gastrointestinal tract in the pathogenesis of colitis has been well established[19]. The activity exhibited by AIE at 200 mg/ml concentration was ≥10 mm, which have been considered as active dose[20] and this could be due to the presence of tannins and phenolic compounds in the extract which have been reported to have antimicrobial effect. The results of the present study with extract of leaves of AI do indicate promising healing effects in colitis.

This work was supported by Central Council for research in Ayurveda and Siddha (CCRAS), Department of AYUSH, Ministry of Health and Family Welfare, Govt. of India, New Delhi (BHU Research project no.: P−15−30).