The chemical investigation of acetone extract of manglicolous lichen Ramalina leiodea yielded three known metabolites, methyl 2,6-dihydroxy-4-methyl benzoate (1), haematommic acid (2) and ethyl haematommate (3), which are reported for the first time in this species. The acetone extract and the metabolites (1-3) were screened for antioxidant activity in α,α-diphenyl-β-picrylhydrazyl, 2,2’-azino-bis(3-ethylbenzothiazoline-6-sulphonic acid) and superoxide free radical assays, for antiinflammatory activity in pretein denaturation assay and for anticancer activity in sulforhodamine B assay on lung, head and neck, and cervical cancer cells. The results showed that compounds 2 and 3 depicted inhibitory profiles against 2,2’-azino-bis(3-ethylbenzothiazoline-6-sulphonic acid) free radical with an IC50 of 40.0 and 40.5 µg/ml, respectively and caused protein denaturation with an IC50 of 435 and 403 µg/ml, respectively. Furthermore, compounds 2 and 3 exhibited a significant degree of specificity against cervical, head and neck, and lung cancer cells, while these compounds showed little toxicity against normal human mammary epithelial cell line. In summary the manglicolous lichen Ramalina leiodea possessed free radical scavenging, antiinflammatory, and anticancer activities and the main metabolites responsible for these activities could be compounds 2 and 3.

Lichens is a symbiotic organism belongs to bryophytes that have an ability to persevere on any geographical region or any substratum[1]. Due to their unique survival and mutualistic characteristics, lichens and their secondary metabolites are used to treat several infections and diseases[2]. The lichens that particularly associated with mangroves or mangals are termed as manglicolous lichens[3]. Lichen and their secondary metabolites exert a varied range of biological actions that include analgesic, antibiotic, antiinflammatory, antimycotic, antipyretic, antiviral, and cytotoxicity[2,4,5]. Especially, manglicolous lichens show a difference in their biological components and actions compared to normal lichens due to their physiological adaptation towards the intertidal zone i.e., having both the marine and freshwater environments[6]. As mangals persist in a stressful environment such as high concentration of` moisture and salt, low and high tidal water, lichens habituated on these plants also exposed to these stress conditions. As a result, they show a difference in phytochemical constituents than normal lichens due to stressed physiological adaptations[2,6,7]. Besides, there are very few chemical and pharmacological reports that exist on manglicolous lichens due to their slow growth (1 cm/y) and difficulty in collecting a good amount of specimen from mangrove regions[8-10]. Ramalina genus has about 246 species distributed around the world, of which only 118 species were investigated for their chemical and biological properties[11,12]. The diverse secondary metabolites isolated include usnic acid derivatives, depsides, depsidones, fatty acids, sterols, and monocyclic aromatic compounds[11-19]. Moreover, biological screening of this genus resulted in the identification of antibiotics, antimutagenic, antiHIV, enzyme inhibitory, antioxidant, antiinflammatory, anticancer, antimicrobial activities[5,11,14-21]. Ramalina leiodea is a corticolous fruticose lichen that belongs to the Ramalina genus. Earlier, our group reported the phytochemical analysis, antimicrobial, antimycobacterial, and antiinflammatory activities of various extracts of R. leiodea[5,11]. In continuation of the reported work, the present study was taken up to identify the bioactive constituents present in R. leiodea. 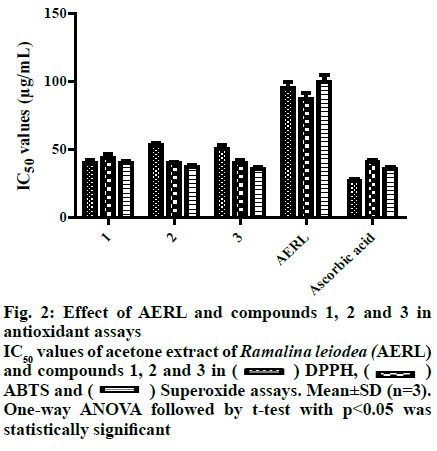 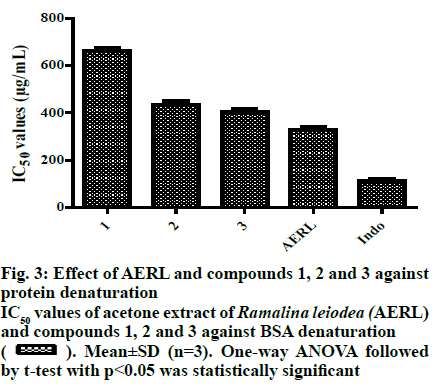 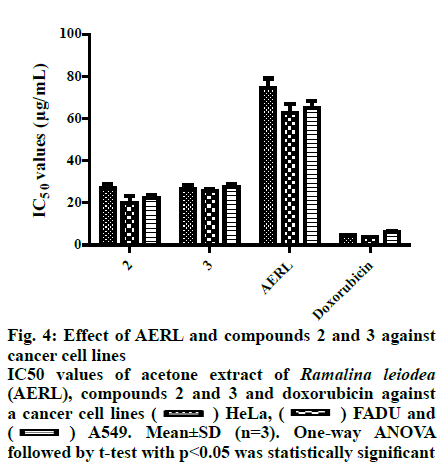