Cymbopogon olivieri essential oil from aerial parts was analyzed by gas chromotography and gas chromatographyâ??mass spectrometry and led to the identification of 38 compounds. Piperitone (72.8%), 4â??carene (11.8%) and βâ??himachalene (7.6%) were found as the major components of the oil. The antimicrobial activity was achieved using discâ??diffusion and microbroth dilution assays and microbicidal kinetics of oil was screened against different microorganisms. The possible antioxidant activity of oil was evaluated by diphenylpicrylhydrazyl freeâ??radical scavenging system. The oil had excellent antimicrobial activity against Bacillus cereus, Staphylococcus epidermidis and Streptococcus pneumoniae. The oil exhibited inhibitory effect against Bacillus subtilis and fungi. Dvalues of oil were 12.5, 10 and 2.4 min for Escherichia coli, Staphylococcus aureus and Candida albicans, respectively. The IC50 value of Cymbopogon olivieri oil was 35 mg/ml and its antioxidant activity was lower than that of butylated hydroxytoluene. Cymbopogon olivieri oil possesses compounds with antimicrobial properties that can be used as antimicrobial agents.

Cymbopogon genus from Gramineae family has two perennial genus in Iran (Cymbopogon olivieri and C. parkeri) that are distributed in tropical and subtropical regions of Asia [1]. C.olivieri as an aromatic plant has been used in folk medicine as an antiseptic agent and also as a remedy for the treatment of stomach ache, nervous, pyretic, vomit and rheumatism problems and as a diuretic [2]. The ingredients of oil have been subjected to number of studies in Iran. It has been found that the major components of oil from Kerman Province are; piperitone (61.0%), β-caryophyllene (14.4%) [3], from Jiroft; piperitone (45%), delta-3-carene (22.5%) and α-eudesmol (13.3%) [4]. In another study, piperitone (53.3%), α-terpinene (13.6%) and elemol (7.7%) were found to be the major constituents of oil with excellent antimicrobial activity against Staphylococcus aureus, Staphylococcus saprophyticus, Salmonella typhimurium, Shigella dysenteriae, Escherichia coli [5,6]. It has been shown that the oil from aerial part of plant with piperitone (48.9%), α-terpinene (13.8%) had excellent antimicrobial activity against Bacillus subtilis, Bacillus cereus but had no effect on Pseudomonas aeruginosa and Klebsiella pneumoniae [7]. Piperitone, α-pinene, myrcene, pulegone were the major components of Indian C. olivieri oil [8]. There is no study on the antioxidant activity of C. olivieri oil. The aim of this study was to evaluate the antimicrobial and antioxidant activity of oil and related chemical composition of oil.

The oil from dried aerial parts of C. olivieri Boiss was analysed using GC-FID and gas chromatography/mass spectrometry (GC/MS). The GC apparatus was Agilent technology (HP) 6890 system, capillary column of HP-5MS (60 m×0.25 mm, film thickness 0.25 μm). The oven temperature programme was initiated at 40°, held for 1 min then raised up to 230° at a rate of 3°/min and held for 10 min. Helium was used as the carrier gas at a flow rate 1.0 ml/min. The detector and injector temperatures were 250 and 230°, respectively. GC/MS analysis was conducted on a HP 6890 GC system coupled with 5973 network mass selective detector with a capillary column the same as above, carrier gas helium with a flow rate of 1 ml/min with a split ratio equal to 1/50, injector and oven temperature programmed was identical to GC. The compounds of the oil were identified by comparison of their retention indices (RI), mass spectra fragmentation with those on the stored Wiley 7n.1 mass computer library, and NIST (National Institute of Standards and Technology).

The agar disc-diffusion method was employed for the determination of antimicrobial activities of the oil. Briefly, using a sterile cotton swab, 0.1 ml from 108 CFU/ml microbial suspensions was spread on the Mueller Hinton Agar (MHA) plates for nonfastidious bacteria, Todd Hewitt Agar for fastidious bacteria and Sabouraud dextrose Agar for fungi. Sterile filter paper discs (6 mm in diameter) were impregnated with 5, 10, 15 and 20 μl of the oil and were placed on the inoculated plates. These plates, after remaining at 4° for 2 h, were incubated for 24 h at 37° (for bacteria) and for 48 h at 30° (for fungi). The diameters of the inhibition zones were measured in millimetres. All tests were performed in triplicate [9].

The minimum inhibitory concentration (MIC) and minimum lethal concentration (MLC) values of oil were determined by microbroth dilution assay. The oil was two-fold serially diluted with 10% DMSO which contains 16-0.0125 μl/ml of oil. These dilutions were prepared in a 96-well microtitre plate. MOPS-buffered RPMI 1640 (for fungi) [10], cation-adjusted Muller Hinton broth (nonfastidious bacteria) [9] and Todd Hewitt broth (fastidious bacteria) [11] were used as broth media. After shaking, 100 μl of oil was added to each well. The above microbial suspensions was diluted (1×106 CFU/ml for bacteria; 104 for fungi) and then 100 μl was added to each well and incubated at 35°. MICs were defined as the lowest concentration of compound that inhibits bacteria after 24 h and fungi after 48 h. MLC values were the first well that showed no growth on solid media.

Forty microlitres of oil according to the MLC value was added to each of the 5 ml of relevant broth tubes containing the microbial suspension of 107 CFU/ml and were then incubated in an incubator-shaker. 0.1 ml samples were taken after 5, 10, 15, 20, 25, 30, 45 and 60 min and spread on appropriate agar plates for 24 h at 37°. The time required to decrease the microbial population in a sample by 90% on the basis of logarithmic value (the mean total number of viable bacteria or yeast from microbicidal kinetics experiments at each time interval was converted to log10 viable cells using routine mathematical formulae) of one was regarded as Dvalue [12].

The antioxidant activity of oil was compared with well-known synthetic antioxidants, butylated hydroxytoluene (BHT). The hydrogen atom or electron donation abilities of some pure compounds were measured from the bleaching of the purple-coloured ethanol solution of 2, 2-diphenylpicrylhydrazyl (DPPH). Five hundred microlitres of various concentrations of the essential oil in ethanol were added to 2 ml of a 6.0×10–5 M solution of DPPH in ethanol. After a 70 min incubation period at room temperature, the absorbance was read against a blank at 517 nm. Inhibition of free radical by DPPH in percent (1%) was calculated in the following way: I% =100×(Ablank−Asample)/Ablank. Where, Ablank is the absorbance of the blank solution (containing all reagents except the test compound), and Asample is the absorbance of the test compound. Essential oil concentration providing 50% inhibition (IC50) was calculated from the plot of inhibition percentage against essential oil concentration. Tests were carried out in triplicate [13,14].

The yield of essential oil from C. olivieri aerial parts was 3.14% w/w. Thirty-eight from thirty-nine peaks accounted for over 99% of total composition of oil. Piperitone (72.8%), 4-carene (11.8%) and β-himachalene (7.6%) were found as the major components of the oil followed by limonene (0.9%), β-fenchyl alcohol (0.8%) and elemol (0.6%) (Table 1). Piperitone is a terpene ketone found in most of Mentha species well-known to possess carminative properties [15]. C. olivieri oil from different origins has been reported to have piperitone as the main component but at different proportions [3-8] and different second major component [8].

In disc diffusion method, compared to the antibiotic employed, the activity was weak but the effect of 10 μl oil against B. cereus, C. albicans, C. glabrata was effective than vancomycin and amphotericin B. For B. cereus, the antimicrobial activity of 5 μl of oil was larger than the vancomycin. Among Gram-negative bacteria, E. coli was resistant to the oil than others like S. aureus, E. faecalis, E. faecium were resistant than other Gram-positive bacteria to the oil (Table 2).

After exposure to the MLC levels of oil, Dvalues were 12.5, 10 and 2.4 min for E. coli, S. aureus and C. albicans, respectively. These values suggest variations in the vulnerability of different microorganisms to oil. The results of antimicrobial activity are in agreement with results of Sonboli et al [7]. Our oil had excellent antimicrobial activity against Bacillus cereus, but had low effect on E. coli, S. typhimurium, S. aureus in contrast to Chalabian et al [6]. The differences in the results may be attributed to the amount of major components and or trace compounds and possible synergistic and antagonistic effect of compounds in the oil. However, according to a recent investigation, piperitone showed antibacterial activity against some bacteria especially B. dipesauri [16] and A. flavus growth at relatively low concentration [17]. Piperitone increases nitrofurantoin susceptibility and reduces the activity of nitro reductase in a dose-dependent manner in Enterobacteriaceae [18].

The DPPH radical-scavenging activities of the essential oil and BHT are shown in fig. 1. The examined essential oil exhibited weak radical-scavenging activity, reducing the DPPH radical formation (IC50 = 35 mg/ml) in a dose-dependent manner. The IC50 of BHT was 0.18 mg/ml. Essential oils reduced the concentration of DPPH free radical, with an efficacy lower than that of BHT. The oil had weaker antioxidant capacity than the positive control. Therefore, our results demonstrate that the essential oil had no powerful antioxidant activity. 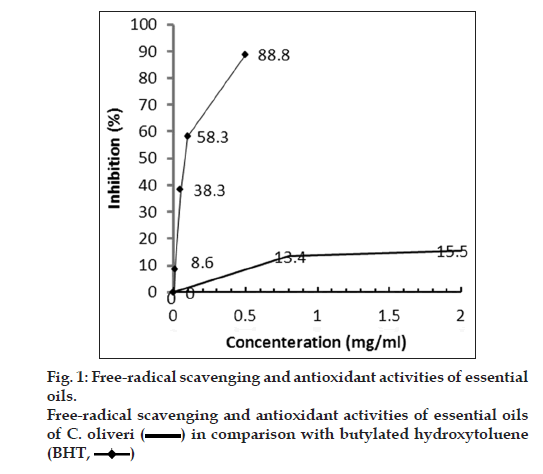 in comparison with butylated hydroxytoluene
(BHT,

The results of this investigation exhibited excellent antimicrobial activity and a little antioxidant activity. The oil possesses compounds with antimicrobial properties that can be used as/in new drugs for treatment of infectious diseases and have potential for use as botanical preservatives.

Our results support the ethnopharmacological uses of this plant in folk medicine and could provide useful data for utilisation of oil in pharmaceutical, cosmetic and food industry.