Biodegradable in situ Gel for Subcutaneous Administration of Simvastatin for Osteoporosis

Many observational studies and animal research has revealed that statins appear to enhance osteoblastic activity and diminish osteoclast activity, hence increasing bone density. This study was aimed to prepare and characterize biodegradable in situ gel for subcutaneous administration of simvastatin for the treatment of osteoporosis. Biodegradable in situ gel was prepared using chitosan as biodegradable polymer and β-glycerol phosphate disodium salt hydrate as a buffering agent to achieve in situ gelation at physiological pH and temperature. In situ gel was characterized in terms of pH, gelling capacity, drug content, sedimentation volume, resuspendability, syringeability, in vitro drug release, particle size and zeta potential. The optimized formulation, containing 1.25 % w/v chitosan and 1 % β-glycerol phosphate disodium salt hydrate, had good gelling capacity at physiological temperature and pH. It had a pH of 5.85±0.5, drug content of 97.1±1.2 % and sedimentation volume of 0.42±0.04. In vitro drug release was found to be 98.7±1.5 % in 7 days. Particle size, zeta potential and viscosity were found to be 7.07±0.3 μm, 12.5±1.5 mV and 22.66±1.8 cp, respectively. Hence, the developed biodegradable in situ gel administered subcutaneously can prove to be an effective alternative drug delivery system for the treatment of osteoporosis.

Osteoporosis is a systemic skeletal disease characterized by low bone mass and micro architectural deterioration of bone tissue, which leads to bone fragility and susceptibility to fracture [1]. It is also called a “silent disease” as it develops without any noticeable symptoms until a fracture occurs [2]. Statin drugs are clinically used in condition of hyperlipidaemia to lower the cholesterol levels and therefore reducing the risk of heart attack. However, many studies revealed that statins appear to enhance osteoblastic activity by both increasing expression of bone morphogenetic protein-2, a stimulator of osteoblast differentiation, and diminishing osteoclast activity by preventing prenylation and activation of key intracellular proteins [1]. All the available data from the literature, which include, evidence from experimental studies as well as from the vast majority of observational studies and the results of a single meta-analysis, suggest that there is a positive effect of statins on bone mass density [3].

It has been observed that the response to increase bone formation in rats was greater when the statins were administered transdermally as compared to oral administration of the same. This further depends on potency and lipophilicity of each statin. Simvastatin has a positive effect on bone mass density. Moreover it also has enough lipophilicity to enter the cells easily [4]. Biodegradable injectable in situ gel forming drug delivery systems represent an attractive alternative to microspheres and implants as parenteral depot systems. It consists of biodegradable polymers dissolved in a biocompatible carrier. When the liquid polymer system is placed in the body using standard needles and syringes, it undergoes solidification upon contact with aqueous body fluids to form solid implant. If a drug is incorporated into the polymer solution, it becomes entrapped within polymer matrix as it solidifies. Drug release occurs over time as polymer biodegrades. Biodegradable polymers used in these systems are polyanhydrides, polyhydroxy acids, polyesteramides, polyorthoesters and others [5]. Chitosan (CS) is an aminopolysaccharide obtained by alkaline deacetylation of chitin, a natural component of shrimp or crab shells. It is biocompatible and biodegradable pH-dependent cationic polymer. Polyol salts bearing a single anionic head, such as glycerol-, sorbitol-, fructose- or glucosephosphate salts (polyol- or sugar-phosphates) are ideal agents for transforming purely pH-dependent CS solutions into temperature-controlled pH-dependent CS solutions. The combination of CS, a cationic polysaccharide, and polyol-phosphate salts is beneficial from several synergistic forces favourable to gel formation including hydrogen bonding, electrostatic interactions and hydrophobic interactions. This set of phosphate salts gives a unique behaviour by allowing the CS solutions to remain liquid at the physiological pH and to turn into gel if heated at body temperature [5-7].

Hence, an attempt was made to prepare and characterize biodegradable in situ gel for subcutaneous administration of a simvastatin, which could be useful in the treatment of osteoporosis. CS (degree of deacetylation of approximately 91 %) was procured from Chemdyes Corporation, Vadodara. β-Glycerol phosphate disodium salt hydrate (β-GP) was purchased from Sigma Aldrich (USA). Simvastatin was purchased from Centurion Laboratories (Vadodara). All the other chemicals and reagents used were of analytical grade.

CS was dissolved in 0.1 N HCl and the mixture was stirred vigorously till a clear solution was obtained. CS solution was chilled to a temperature of 4-5°. β-GP was dissolved in distilled water. It was then cooled to 4-5° and was subsequently added to chilled CS solution in a controlled manner. The resulting mixture was stirred for 5 min. The calculated amount of drug was weighed and dispersed, and then sonicated for 10 s. Propyl paraben (0.02 %) was used as a preservative. This in situ gel was sterilised by autoclaving at 121° for 15 min. The concentration of CS and β-GP were optimised by using manual experimental design as shown in Table 1. pH of each formulation was determined by using digital pH meter. It has been reported that the discomfort at injection site would be minimum, if the pH is close to the physiological pH.

Gelling systems of various concentrations of CS and β-GP were prepared and evaluated for gelling capacity in order to identify the compositions suitable for use as an in situ gelling system. The gelling capacity was determined by placing 100 μl of in situ gel in a vial containing 2 ml of phosphate buffer at pH 7.4 and equilibrated at 37 ± 1° and visually assessing the gel formation and noting the time for gelation. +: Gels after few minutes, dissolves rapidly, ++: immediate gelation and remains for few hours, +++: immediate gelation and remains for extended periods.

To determine drug content, an amount of in situ gel containing a specified amount of drug was taken and dissolved in 10 ml of methanol. Appropriate dilutions were made using phosphate buffer pH 7.4. The absorbance was measured spectrophotometrically at 238 nm. About 10 ml of the suspension was transferred to a stoppered measuring cylinder and was stored at room temperature for 72 h. The volume of sediment formed was noted. The sedimentation volume was calculated as the ratio of ultimate height (Hu) of the sediment to the final height (Ho) of the suspension [8]. Sedimentation volume = Hu/Ho. After sedimentation was complete, the measuring cylinder was manually shaken. Based on the effort and number of shakings needed to convert the sedimented system to a homogenous suspension, the prepared product was rated as, resuspendable, resuspendable with difficulty or not resuspendable [8].

Particle size was determined using optical microscopic method, before and after sonication of the formulation. Zetasizer (Nano-ZS, Malvern Instruments, UK) was used to determine the zeta potential. Viscosity of all the batches was determined using a Brookfield viscometer. The viscosity was measured at 50 rpm and room temperature using spindle number 3.

In vitro release of the drug from in situ gel was measured using the membrane less diffusion method. From each formulation, 2 ml solution containing the drug was transferred into a beaker containing 150 ml of pH 7.4 phosphate buffer maintained at 37 ± 1°. As the solution came into contact with the buffer, it transformed in to a gel. About 5 ml of samples were collected at predetermined time intervals, replacing fresh 5 ml buffer into the dissolution medium. Agitation was maintained in the beaker with the help of a magnetic stirrer. The drug concentration was determined spectrophotometrically at 238 nm [9].

Syringeability was determined employing two methods. Qualitative measurement of syringeability in which the formulation was tested by passing through a 24-gauge needle to test the ease of administration. Second method was syringeability measurement using the Brookfield’s Texture analyser, QTS.

Sterility testing was performed using the fluid thioglycollate and soybean-casein digest medium with direct inoculation method, as per the Indian Pharmacopoeia. About 2 ml of the sample was taken from sterilized sample with the help of sterile pipette or syringe and was transferred aseptically to fluid thioglycollate medium and soybean-casein digest medium separately. These samples were incubated for 14 d at 30-35° in case of fluid thioglycollate medium and 20-25° in case of soybean-casein digest medium. The test tubes were checked for growth everyday till 14 d. pH of each formulation was determined by using digital pH meter. As the concentration of β-GP increased it neutralized the CS solution and increased the pH to bring it near physiological pH. pH values of all the formulation batches were shown in Table 2.

Table 2: Evaluation of Different Batches of in situ Gel

Figure 1: In situ gel at room conditions (a) and in situ gel formation in pH 7.4 buffer (b)

The particle size of all the batches, before and after sonication, was determined. Correction factor = (number of divisions of eyepiece micrometre/number of divisions of stage micrometre)×10. Correction factor = (15/11)×10 = 13.63. As recorded in Table 2, all batches, after sonication, had a particle size below 10 μm, which was not expected to block the needle and hence expected to have good syringeability. Zeta potential of the optimized batch was found to be 12.5 ± 1.5 mV, which indicated stability of the formulation. Viscosity was measured at 50 rpm and room temperature using spindle number 3. The viscosity of all the batches was shown in Table 2. The viscosity of the in situ gel increased as there is increase in the concentration of CS. The viscosity of the formulation directly influenced the syringeability.

In vitro release of drug from in situ gel was evaluated using the membrane less diffusion method as already described. The drug concentration was deduced from the calibration curve of pure drug in different dissolution media. The in vitro drug release of all the batches was presented in Table 3. Batches A1 to A4 released the drug within 24 h, B1 to B4 showed drug release up to 48 h, batches C1 to C4 could extend the drug release up to 5 d and D1 to D4 showed extended drug release for 7 d. As the CS concentration was increased, there was decrease in the drug release rate. The reason for this response could be the formation of swollen gel like structure that could substantially reduce the penetration of dissolution medium into the gel. Increase in the concentration of CS led to the formation of more dense gel from which the drug release was retarded. The optimised formulation followed Higuchi square root kinetic model, which indicated that drug release followed diffusion mechanism. The peak load and mean load for syringeability of the optimized batch was found to be 974.12 g and 354.23 g, respectively as shown in Figure 2. 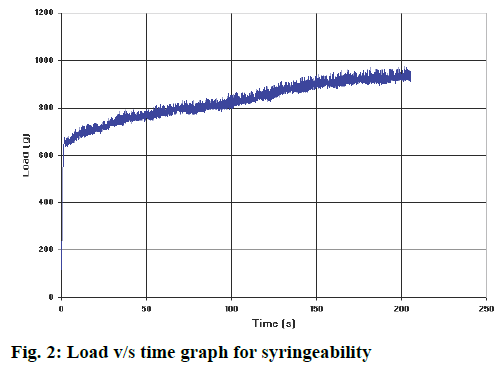 Sterility testing was performed using the fluid thioglycolate and soybean-casein digest medium, respectively. No microbial growth (turbidity) was observed in both the media. As there was no microbial growth in the sterilized media containing the formulation stored at the above-mentioned conditions, it was interpreted that the formulations were sterile.

Results of gelling capacity (Table 2) and drug release (Table 3) revealed that batches containing 1.25 % w/v CS (D1 to D4) had good gelling capacity (showed immediate gelation and remained for extended periods) and could sustain the drug release for up to 7 d. Increasing the concentration of β-GP from 1.0 to 4.0 % w/v did not show any significant difference in results, hence D1 (1.25 % w/v CS and 1.0 % w/v β-GP) was considered as optimized formulation.

In the present study, biodegradable in situ gel containing simvastatin, which was intended to be administered subcutaneously, was prepared using CS as the polymer and β-GP as the buffering agent. The concentration of CS and β-GP were optimized successfully using manual experimental design. 1.25 % CS and 1 % β-GP concentrations were selected as optimum formulation parameters. The pH, drug content, sedimentation volume, in vitro drug release, particle size, zeta potential and viscosity of the optimised formulation were found to be 5.85 ± 0.5, 97.1 ± 1.2, 0.42 ± 0.04, 98.7 ± 1.5 % cumulative drug release in 7 d, 7.07 ± 0.3 μm, 12.5 ± 1.5 mV and 22.66 ± 1.8 cp, respectively. The optimised in situ gel showed immediate gelation and retained the gel form up to 7 d. Hence, the developed biodegradable in situ gel of simvastatin can be effectively used for subcutaneous administration in the treatment of osteoporosis.