Current study was undertaken in order to determine model biopharmaceutical constants for carbamazepine immediate release tablets (200 mg) from documented data of plasma concentration vs time curves. The constants and the proposed methodology simplify bioequivalence determinations to blood sampling restricted only to two time points. Twelve volunteer drug plasma concentration (Cp) determinations from a crossover design bioequivalence study were fitted into equations containing two rate processes. The optimized rate constants were used to generate the Cp vs time curves (generated curves). Generated curves were then differentiated (dCp/dt ) to obtain the first derivative curve for each volunteer from which times for highest rate of absorption (TAmaxn) and highest rate of elimination (TEmaxn) were determined. The corresponding highest rate of absorption and the highest rate of elimination for each individual were then obtained from the generated curve and named as Amaxn and Emaxn. Individual Amaxn and Emaxn values were then averaged to obtain the mean Amax and Emax. Out of the 24 determinations, a total of 13 Amaxn and 20 Emaxn values fell within ±20% of the overall mean. Final Amax and Emax values ware arrived at by averaging each set of individual 13 values and 20 values respectively. From these two mean coordinates, the corresponding constants, plasma drug concentration at the point of highest rate of absorption (CpAmax) and corresponding time TAmax, as well as the plasma drug concentration at the point of highest rate of elimination (CpEmax) and the corresponding time TEmax, were determined.

The present day bioequivalence studies are too complicated, expensive and difficult to be carried out. Two of the reasons for this difficulty are the need for many healthy volunteers and withdrawing 10-20 blood samples from an indwelling catheter from each volunteer spanning over a long period of time. Same procedure has to be repeated after a washout period, substituting the reference and test samples in the volunteers. All the samples have to be chemically analyzed and the collected data subjected to elaborate statistical analysis. The parameter ‘area under the curve’ can have nearly the same values for vastly bioinequivalent products as it reflects only the total amount of drug reaching the systemic circulation [1].

Over the years, bioavailability studies on selected drugs have been performed repeatedly, generating a large pool of data. In the present study, an attempt is being made on one such study as a model to arrive at universal biopharmaceutical constants for carbamazepine immediate release tablets 200 mg strength. The typical bioavailability curve Cp vs time has only one distinct point, which is the conventional Cmax. In the present study, two new distinct kinetic points at the highest rate of absorption (Amax 7) and the highest rate of elimination (Emax 7) of the drug (Fig. 1) were identified by calculating the derivative (Fig. 2). These two points in the individual curves can be used to generate the two biopharmaceutical constants. 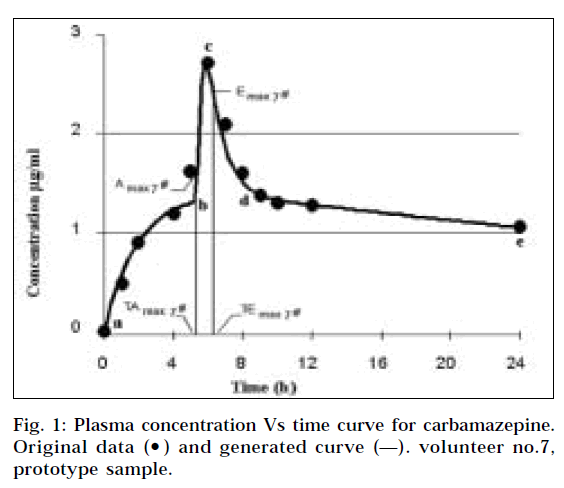 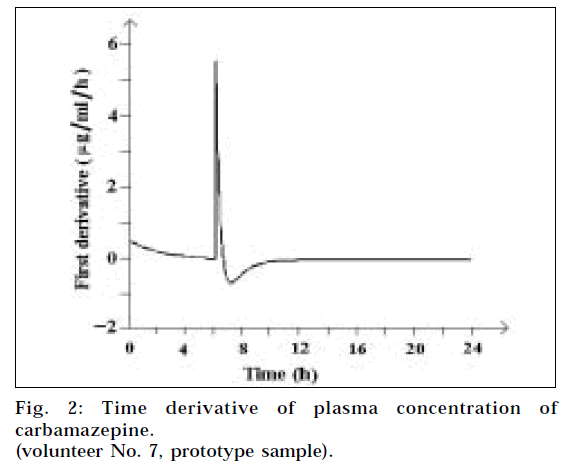 According to the proposed simplified bioequivalence study, the predetermined biopharmaceutical constants, which could be derived from a large pool of volunteers, may replace the need for a prototype standard and the need for a crossover study. A variation of ±20% on each of the two parameters CpAmax and CpEmax could be considered to be the bioequivalence criterion for the test product as has been applied to plasma drug concentration determinations [2].

The two biopharmaceutical constants for carbamazepine 200 mg immediate release tablets were determined in the following manner. Plasma carbamazepine concentration data were collected from a crossover bioequivalence study that had already been conducted. For the purpose of arriving at the proposed constants, the data of the test samples (Table 1) and the prototype drug (Table 2) were pooled together. This was done in order to determine the constants with greater accuracy.

Rate equations were fitted into raw data and were optimised. The generated curves were then obtained. The computer software package 2D-curve, supplied with SYSTAT, and MS Excel 2000 were used in the data treatment [3]. An equation of the first order kinetic type, Cp=C1exp(-k1t)+C2exp(-k2t)-(1), where CP is the plasma drug concentration, C1 and C2 are two constants related to highest plasma concentration of the drug, k1 and k2 are related to the rate constants of the processes, and t is time, was used to model the plasma concentration of carbamazepine. As described by Notari [4], equations of the above form with two or more exponential terms can be used as model independent equations to treat plasma concentrations of drugs. However, it was found that the entire set of raw data for carbamazepine did not fit into the curve derived from the above equation alone. Therefore, a modified form of the Equation 1 with a time delay x, Cp=C1exp(-k1(t-x))+C2exp(-k2(t-x))-(2) was also included in the modelling.

It was observed that the plasma concentration vs time curve of carbamazepine has four segments corresponding to two curve patterns as shown in Fig. 1, where the Equation 1 mainly describes the segments a-b, d-e, and Equation 2 mainly describes the segments b-c-d. Further, it was observed that forms of equations other than kinetic equations found in the software package [3] could be fitted to data, to yield similar curves. 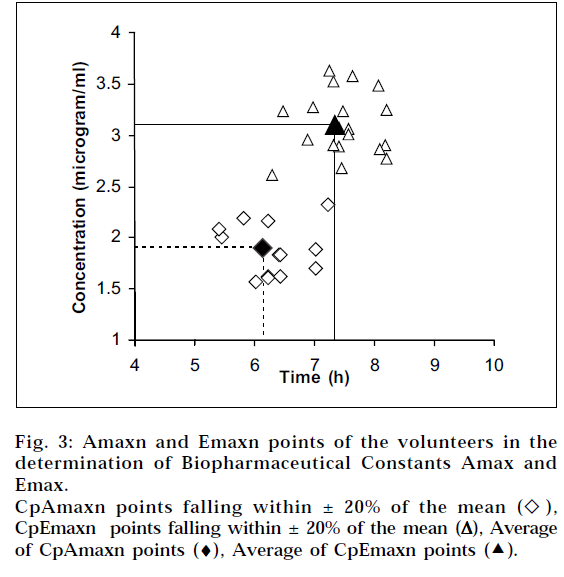 Figure 3: Amaxn and Emaxn points of the volunteers in the determination of Biopharmaceutical Constants Amax and Emax.
CpAmaxn points falling within ± 20% of the mean (

Determination of the constants

The CpAmaxn and CpEmaxn values for individuals were obtained from the generated curve by reading the Cp values from y-axis corresponding to TAmaxn and TEmaxn respectively. The procedure was applied twice for the prototype and the test sample tablets to all 12 individual volunteers in the crossover study. Only the values falling within the range of ±20% of the overall mean were selected and averaged again to obtain the biopharmaceutical constants TAmax, CpAmax and TEmax, CpEmax. All the stages, symbols and the units are summarized in Table 3.

Table 3: Summery Of Stages, Symbols And Units In The Determination Of Carbamazepine Biopharmaceutical Constants

The most important basic findings in the study are the two mathematically defined points (TAmaxn, CpAmaxn) and (TEmaxn, CpEmaxn) for individual Cp vs time curves and their corresponding average values. All these values are closely related to the bioavailability performance of a solid oral dosage form.

TAmax determined by averaging TAmaxn values was found to be 6.191 h. TEmax determined by averaging TEmaxn values was found to be 7.349 h (Table 4 and Fig. 3). The final averages for biopharmaceutical constants, CpAmax and CpEmax were found to be 1.976 μg/ml at 6.191 h and 3.105 μg/ml at 7.349 h respectively (Table 4 and Fig. 3). These constants are applicable to single unit dosage study for immediate release carbamazepine tablets 200 mg strength. Therefore, the proposed method substantially reduces time involvement and the number of blood samples required for the study.

Table 4: Times For Highst Rates Of Absorption And Elimination With The Corresponding Drug Plasma Concentrations

The mathematical procedure described here for the determination of universal biopharmaceutical constants, specifically for carbamazepine immediate release tablets 200 mg strength, could be considered as a model for the other drugs. Generated curves for the majority of the drugs could be arrived at by employing the Equations 1 and 2. The larger the raw data pool, the closer will be the biopharmaceutical constants to the universal values. An important aspect of the proposed method is the replacement of biologically irrelevant geometrically derived unit μg/ml/h, representing an area parameter, by realistic concentration parameters based on truly kinetic data.

Once universal constants have been determined for different drugs from existing data, routine bioequivalence studies could be undertaken using the simplified method proposed here. In time to come, as brands turn into generics in increasing numbers, the availability of the biopharmaceutical constants and the simplified method will greatly facilitate the bioequivalence studies of the generics, and thereby, the drug registration process. Although the mathematical treatment in the determination of the two constants by SYSTAT computer software package3 as indicated here is somewhat intricate, once established, their usage at the actual bioequivalence determination is simple.

A surprising degree of variations of both coordinates Amaxn and Emaxn is evident in the display of the coordinates in the Fig. 3, which is not evident in the current bioavailability interpretations based on the conventional plasma concentration vs time curves. Dimensional analysis of the two values Amax and Emax shows that the three units (mass, volume and time) are accommodated here, providing maximum scope for variation, which is evident in Fig. 3. All the TAmaxn and TEmaxn values were within ±20% of the overall average. However, some CpAmaxn and CpEmaxn values were outside the ±20% of overall average. The scatter of the points (TAmaxn, CpAmaxn) on the absorption side is indicative of the properties of the solid oral unit doses, whereas the scatter of the points (TEmaxn, CpEmaxn) on the elimination side is indicative of the pharmacokinetic behaviour of volunteers. As expected, CpEmax is closer to conventional Cmax when compared to CpAmax.

The time difference of 1.2 h between TAmax and TEmax for carbamazepine is because of its unusual absorption and elimination pattern as reflected in the Fig. 1. For most other drugs, the time difference between the two points should be much larger. For spironolactone tablets, it is 4.5 h (Table 5). To apply the proposed method in actual practice, first the available plasma concentration data should be fitted to kinetic equations, and the two points with the maximum rate of absorption (TAmax, CpAmax) and maximum rate of elimination (TEmax, CpEmax) for the drug under study should be found (Table 3). Then test sample must be administered to the required number of volunteers, and blood samples should be drawn only at the time points TAmax and TEmax. Thereafter, the Cp values of the samples must be determined. The averaged plasma drug concentrations of individuals should be determined as indicated in steps 7 and 8 of Table 3. If the average plasma concentrations at each time point fall within ±20% of the concentrations CpAmax and CpEmax respectively, the sample could be considered to be bioequivalent.

Table 5: Comparision Of Conventional And Proposed Methods As Applied To Spironolactone Tablets

The proposed method was applied to another bioavailability study on spironolactone tablets made with standard and micronized active ingredients, where the plasma concentration of the major metabolite canrenone had been determined [5]. The data of the study include the blood sampling times (h) 0.5, 1.0, 1.5, 2.0, 2.5, 3.0, 3.5, 8.0, 12 and 24 and the corresponding canrenone plasma concentrations (ng/ml) of the micronized tablets, 71, 209, 291, 394, 462, 502, 458, 280, 173, and 88 and those of the standard tablets, 56, 181, 275, 349, 402, 413, 406, 242, 158 and 79. Results of the data analysis based on the mean values of the study by conventional method and the proposed method are shown in the Table 5. According to the conventional method, differences in peak concentration, peak time and area under the curves between standard and micronized tablets are, respectively, 24%, -18% and 11%. The plasma concentrations (CpAmax, CpEmax) of the micronized tablets at the two time points (TAmax and TEmax) are different from the standard tablets by 23% and 19%, respectively. A greater contrast between the two types of tablets can be seen when the present method was applied compared to the difference observed by area under the curve (11%) determination.