The term transcranial route means the brain targeted transfer of drug molecules across the cranium through the layers of the skin and skin appendages of the head, arteries and veins of the skin of the head, the cranial bones along with the diploe, the cranial bone sutures, the meninges and specifically through the emissary veins. The administration of drugs through the scalp in ayurvedic system for the diseases associated with the brain was evaluated with a view to develop a novel targeted route for central nervous system drugs. It is expected to circumvent the systemic side effects of oral route. Diazepam was dissolved in an oil medium and applied on scalp as practiced in the ayurvedic system. Thirty rats were tested on the rotating rotarod for muscle relaxant effect of diazepam. Five groups of rats tested were the control, diazepam i.v. injected (280 µg/0.1 ml) group, two groups treated with transcranial diazepam oil solution (1.5 mg/0.2 ml) and the transcranial blank vehicle treated groups. Holding time in triplicate for each rat on the rotating rotarod was measured. The holding times following each treatment was statistically compared (one-way ANOVA). The pooled average times for the control, diazepam i.v. injected, diazepam oil solution transcranial treated two groups and the blank vehicle treated groups were 35.45, 4.73, 16.5, 15.39 and 33.23 seconds respectively. The two groups subjected to the brain targeted transcranial route showed a statistically significant decrease (50% drop) in the holding time against the control group indicating the centrally acting muscle relaxant effect due to absorption of diazepam into the brain through the proposed route.

Man entertained a special care in all matters relating to the head because the head housed the brain. The effects of a bath are remarkably different from that of a body wash. A head injury, however trivial, is considered a precarious situation and a pimple on the face may be fatal. The apprehensions mentioned above and the drug delivery route that is being undertaken in the present study is incidental to a special anatomical feature of the skull. The emissary veins draining blood from extracranial sites into the intracranial sinuses pierce a series of foramina present in the cranial bones. Seven major sinuses within the skull are interconnected by a number of anastomosing veins, which finally drain intracranially into the jugular veins giving ample scope for the diffusion of the drug molecules into the nerve tissue of the brain. There are thirteen emissary veins connecting extracranial sites of the head with the intracranial sinuses [1]. The emissary veins are present in all higher animals starting with aves [2] and their presence in the horse is well established.

The arteries of the scalp send small twigs to the underlying bones of the scalp. The spongy diploe within the flat skull bones is also well supplied by numerous small diploic branches from arteries both on external and internal surfaces of the skull [3]. These anatomical arrangements of the vascular system are made use of in the investigations to develop the brain targeted transcranial route (abbreviated TCR) of drug delivery.

In the ayurvedic system there are five methods, namely Shirodara, Shiroabyanga, Shiropichu, Shirovasthi and Shiropralepa in which drugs are delivered by the transcranial route [4]. Most of these ayurvedic preparations are oil based. There are many household ayurvedic medicinal head oils for minor ailments such as headaches, sinusitis, vertigo and migraine. An important dosage design feature in this study is the use of the essentially non polar active diazepam drug moiety dissolved in an oil medium as against the use of polar salt forms in aqueous media that are popular with the modern formulations. Diazepam was selected as the screening agent since it is a prototypical benzodiazepine acting in the central nervous system. Diazepam has central depressant and centrally acting skeletal muscle relaxant effects [5]. The skin area of the head which drains venous blood through emissary veins into the intracranial locations is probably the region lying above the circular contour drawn through the angles of the mouth and the ears. Therefore the venous blood draining the eyes, ears and the nose are also drained by this route.

The proposed transcranial route is intended to circumvent the side effects encountered during treatment by the oral route. Some of the central nervous system diseases such as epilepsy need long term therapy. There are prospects of adopting the transcranial route for several groups of drugs. They include antiepileptics, antipsychotics, tranquilizers, analeptics, antiparkinsonian drugs, those acting on the endocrine glands located in the brain, drugs related to diseases of the labyrinth, glaucoma, anticoagulants and those employed in the treatment of drug addiction. CNS side effects of other drugs could be counteracted by administering the specific antagonists through transcranial route. There is a good prospect in adopting the transcranial route in veterinary practice as well. Development of subscalpal injections is another possibility. The proposed brain targeted transcranial route of drug delivery could be viewed as a parallel drug delivery system to that of metered dose inhalers in diseases of the respiratory system.

Ethical clearance for animal experiments was granted by the Ethical Review Committee of the Medical Faculty, Colombo. Both male and female inbred Sprague-Dawley rats weighing between 165-230 g were used. They were divided into five groups of six rats including three from either sex. In the animals that were subjected to the treatment by transcranial delivery route the hair of the scalp was trimmed with scissors without injuring the skin. It was done within the trapezoidal area of the head bound by the pair of eyes and ears, closer to the line joining the ears than the eyes. They were kept at room temperature (around 30°) and fed with adult rat meal pellets and water without any restriction. They were appropriately numbered with picric acid.

The equipment was devised by having an electrically driven horizontal circular rod 18 mm in diameter, 29 cm in length rotating constantly at 15 rpm, mounted on two side panels 43 cm above the base. The rod was covered with no. 300 silicon carbide abrasive paper to provide roughness for the rats to grip the rod firmly.

Diazepam i.v. injection 5 mg/ml, 2 ml ampoules, manufactured by Lab Renaudin, France was reformulated into i.v. injection for rats. Adult human reference i.v. dose of diazepam 10 mg/60 Kg [6] is equivalent to 35 μg/210.6 g rat on a weight basis. Considering the ten fold metabolic rate in rats as against man an eight fold increase in the dose was considered, i.e., 35 μg×8=280 μg of diazepam per rat. Since the strength of the commercial diazepam injection is 5 mg/ml or 5 μg/μl the number of microlitres required for 280 μg of diazepam from the original commercial injection is 280/5 μl = 56 μl. Volume to be injected into a rat was restricted to 100 μl. Therefore the volume of the diluting vehicle needed was 100 μl-56 μl=44 μl. The diluting vehicle was a 1:2 cosolvent of propylene glycol:50% ethyl alcohol. On the above basis the i.v. injection formula for rats was prepared aseptically using twenty times the following amounts to yield 2 ml of the injectable solution. 56 μl of diazepam i.v. injection 5 mg/ml (equivalent to 280 μg of diazepam), propylene glycol 14 μl and 50% ethyl alcohol 30 μl.

It was prepared by dissolving 30 mg of diazepam (250 mesh powder) in 1 ml isopropyl alcohol by shaking for 15-30 min and then adding 3 ml of sesame oil to the above solution and kept mixing until a clear solution formed. The product was left overnight for complete dissolution. The dose and the volume (1.5 mg in 0.2 ml) for TCR administration was decided based on the results of preliminary trials. The trials indicated that the doses which are a few multiples of the intravenous dose did not elicit marked central effects on the animals by the TCR. The volume 0.2 ml was the amount that could be accommodated in the restricted scalp area of the rat without undue spreading.

Blank oil vehicle 0.2 ml for TCR administration was prepared by dissolving 1 ml of isopropyl alcohol in 3 ml of sesame oil. Disposable insulin syringes of 100 units/1 ml capacity with 29 gauge needle were used for rat dorsal tail vein i.v. injection as the positive control and also to deliver the oil based formulation drop wise onto the scalp of the animals.

One animal at a time was placed on the rotating rod. Rats fell off the rod when the grip was lost. The holding time on the rod in seconds was observed for each animal. Each rat was subjected to three rotarod trials, five minutes apart.

Group 2 was tested on the rotarod 15 minutes after the i.v. injection. Group 3 (test group A) and Group 4 (test group B) were tested as follows. Each rat was treated with 0.2 ml of the transcranial diazepam oil formulation containing 1.5 mg of diazepam using insulin syringe. The oil solution in 1/3 quantities were delivered drop wise on to the hair trimmed area of the scalp leaving a gap between the needle end and the skin in three stages as follows. First application at 00:00 time, 2nd application at 00:15 minutes and 3rd application at 00:45 minutes. The first application was followed by gentle rubbing on the scalp with a gloved finger previously smeared in the diazepam oil formulation by stroking ten times in a cranial to caudal direction. This was to facilitate dispelling any air pockets and to bring the oil solution into intimate contact with the skin of the scalp.

Holding time on the rotating rotarod

Mean value of three trials were calculated for each animal in all five groups. The individual means of time in seconds on the rotating rotarod of six animals in each group were pooled to get the mean holding time on the rod for each group (Table 1 and fig. 1). 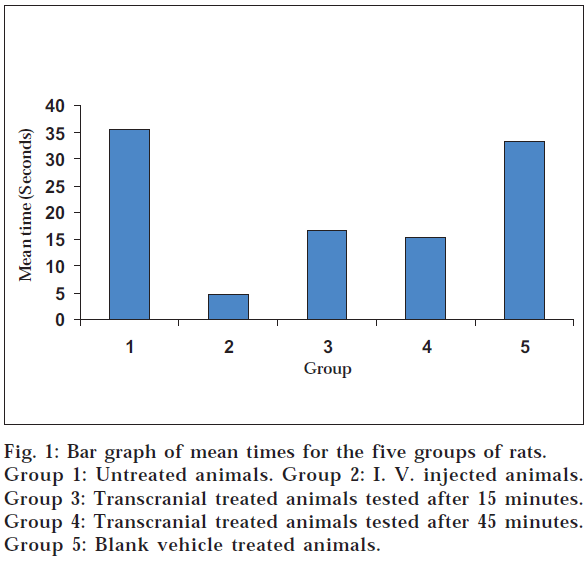 Fig 1: Bar graph of mean times for the five groups of rats.

The mean holding times on the rotarod for group 1 (untreated) and the transcranial blank vehicle treated group (Group 5) being not significantly different (35.45 and 33.23 s, respectively) suggests that there are no effects of either isopropyl alcohol or sesame oil or scalp stroking on the holding time and therefore on the muscle tone/grip. The diazepam i.v. injected group 2 as expected had a significant effect on the mean holding time, bringing it down to 4.73 seconds, further proving the known muscle relaxant effect of diazepam.

The two groups subjected to transcranial route treatment with diazepam showed statistically significant reduction in mean holding times from that of the untreated and the vehicle treated groups and this reduction was almost by 50% (fig. 1). These results suggest that the diazepam drug molecules have been conveyed transcranially in to the nerve tissue of the rat brain under the experimental conditions described here. However the mean holding times of the transcranially treated groups were longer than in the i.v. treated group and these differences were statistically significant, suggesting that the amount of diazepam delivered by the transcranial route to the CNS is significantly lower than that delivered by the i.v. route. This difference in diazepam delivery may be due to the novel experimental route and the properties of the oily formulation of diazepam prepared for transcranial application.

The results of the experiments further indicate that after a certain point irrespective of the concentration of the drug in the oil solution, the volume applied and the time allowed before testing the response to the drug tend to even out unlike in the conventional oral or parenteral routes. This is evident by the fact that the holding times are nearly the same for two transcranially treated groups despite the substantially longer time allowed for the group 4 to effect the diffusion of the drug. There appear to be a wide therapeutic window for diazepam administered by the transcranial route.

On these findings we suggest further experiments with improved formulations of diazepam and other CNS drugs to establish transcranial route as an effective and convenient route of drug administration.