The nasal route opens up an avenue of possibilities for a drug to reach the brain. Clonazepam is highly metabolized with a poor uptake by the blood brain barrier via the peripheral circulation [1]. Hence, the objective of this investigation was to prepare braintargeted gelatin-chitosan mucoadhesive microspheres to obtain rapid onset of action.

Clonazepam, USP was a gift sample from IPCA Laboratories, Mumbai; Chitosan was provided by Healer?s Neutraceuticals, Chennai. All other chemicals and solvents were of analytical reagent grade and were locally procured. The emulsion cross-linking method was used [2]. Gelatin-chitosan mix along with clonazepam was added under constant stirring in paraffi n oil. PEG 400 was the co-solvent employed. Glutaraldehyde-saturated toluene was used as the cross linking agent. Surfactant used was sodium lauryl sulfate (SLS, 0.01% v/v). After the microspheres were formed they were washed with isopropyl alcohol and air dried. The formulations prepared were showed in Table 1. Percent yield was determined by difference in weight before and after the preparation of microspheres [2].

Particle size analysis was done microscopically using an optical microscope (Metzer OPTIK), under 450X (10X eye piece and 45X objective) [2]. One hundred particles were counted. Entrapment efficiency was calculated by soaking the microspheres in methanol and determining the content spectrophotometrically (V-550, Jasco, Japan) [3]. Evaluation of mucoadhesion was carried out using rat intestinal tissue. The amount of microspheres attaching to the tissue was determined by the weight difference [4]. For in vitro release, the paddle method (TDT-08L, Electrolab, India) of dissolution was employed over a period of 2 h. Release was compared against plain drug dissolution [5]. Ex vivo release was determined using sheep nasal mucosa [6]. Here too, the comparison was against plain drug solution. The set up used for this purpose is shown in fig. 1. Further, for in vivo studies, a comparison was made between the formulation administered via the nasal route and clonazepam solution administered intravenously to rats [7]. Plasma and CSF were withdrawn at set time points. Drug content was analyzed in both the fluids and concentration-time profiles were plotted and pharmacokinetics parameters calculated. Using these values, drug targeting index and drug targeting effi ciency were found out. 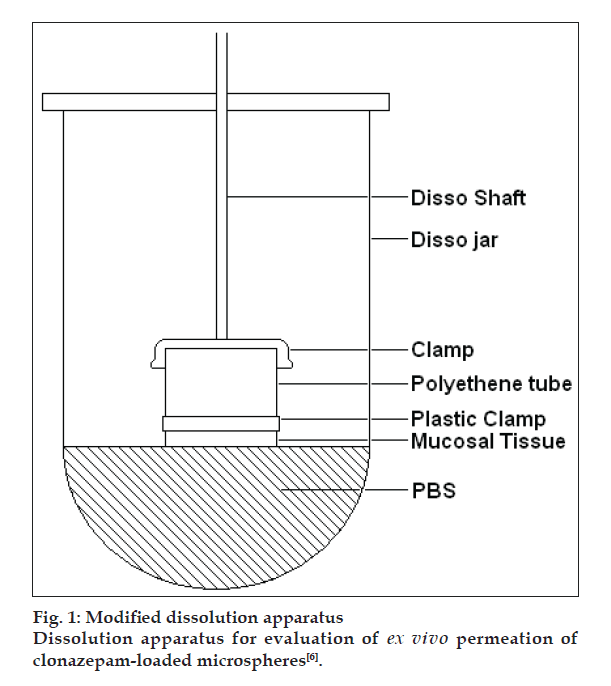 Percent yield ranged from 65.1 to 75.4%. The aver age particle size ranged from 61-75.2 µm. Particle size distribution of LM 1 is shown in fig. 2. Volume of surfactant used played an important role in reducing the particle size. Entrapment values ranged from 38.9-54.23%. The use of PEG 400 enhanced entrapment. The mucoadhesion range was found to be 82.62-89.56%. Mucoadhesion value dropped with reducing the amount of chitosan. Results of the above parametes are tabulated in Table 2. The in vitro release obtained was 99.78% as seen in fig. 3. The ex vivo release achieved was 98.17 % as denoted in fig. 4. Chitosan crucially contributed towards a good release [6]. In vivo studies indicated higher concentration of clonazepam in CSF when administered intranasally as represented in figs. 5 and 6. Drug targeting index was 2.12 and drug targeting effi ciency was 51.71%. Here again chitosan contributed towards a good release [6]. A drug targeting index value more than one indicates direct transport to the brain. Clonazepam is a low molecular weight (315.7) lipophilic moiety, thus indicating towards the possibility of utilizing the transcellular pathway to reach the brain [7]. Hence, a formulation was developed for better drug distribution into the brain, increasing the therapeutic index, reducing side effects with decreased dose for clonazepam. 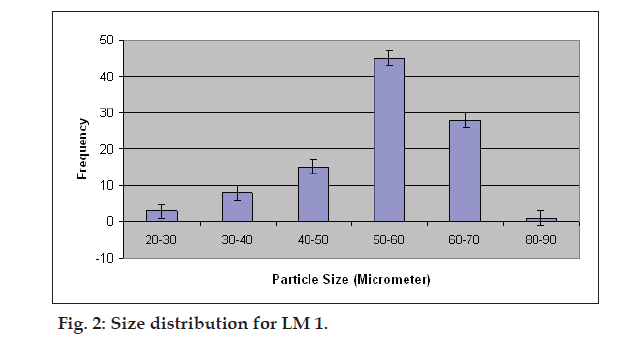 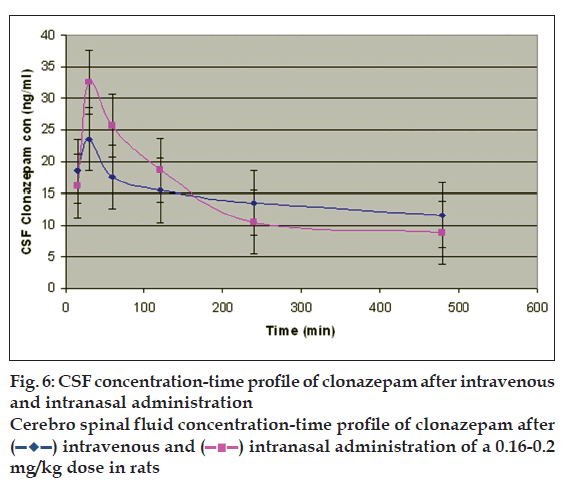 intranasal administration of a 0.16-0.2 mg/kg dose in rats