Buccoadhesive buccal delivery systems for isosorbide dinitrate in the form of unidirectional buccal films were developed and characterized for improving bioavailability. The films were formulated by solvent casting method using different bioadhesive polymers like Carbopol 934P and polyvinyl pyrrolidone by using two different plasticizers propylene glycol and diethyl phthalate. Unidirectional release was achieved by preparing composite films with backing membrane. The films were characterized on the basis of their physical characteristics, bioadhesive performance, and other parameters. In vitro studies revealed that release rate of isosorbide dinitrate was higher from carbopol films containing ratio of Eudragit RL100 and polyvinyl pyrrolidine in proportion of 1:2 and 2:1, respectively by using both plasticizers. Drug diffusion from buccal films showed apparently zero order kinetics and release mechanism was diffusion controlled after considerable swelling. All the films exhibited sufficient in vitro bioadhesion strength. Promising formulations were further studied for temperature dependent stability studies. Results of our preliminary experiments indicate that, therapeutic level of isosorbide dinitrate can be achieved using this buccaladhesive formulation.

Substantial efforts have recently been focused upon placing a drug or drug delivery system in a particular region of the body for extended period of time.This need is not only for local targeting of drugs but also for a better control of systemic drug delivary [1].Mucoadhesive drug delivery systems are delivary systems,which utilize the property of bioadhesion of certain polymers, which become adhesive on hydration and hence can be used for targeting of drug to particular region of body [2].

Isosorbide dinitrate is a long acting nitrate used as an antianginal in myocardial infarction. The main drawback of conventional isosorbide dinitrate formulation is that it undergoes hepatic first pass metabolism by enzymatic denitration. Thus the plasma t½ is 45-60 min thereby decreasing its bioavailability. The conventional sublingual tablets (5-10 mg) produce maximal concentration of the drug in plasma in 6 min and fall in concentration is rapid. Hence an alternative delivery system for improving the onset of action and t is needed.

Preformulation study is one of the important prerequisite in development of any drug delivery system. Hence a preformulation study was carried out to check the compatibility between drug and various polymers. Infra red spectra of physical mixtures of polymer and drug were studied. Colorimetric method was used for the estimation of isosorbide dinitrate. The absorbance was measured at 550 nm3

Calculation of dose to be incorporated in buccoadhesive therapeutic system [4]

The normal dose of isosorbide dinitrate is 5-40 mg/day. The daily dose should not exceed 40 mg. Isosorbide dinitrate undergoes hepatic first pass metabolism and since the buccoadhesive formulation is meant to bypass the hepatic inactivation, 5 mg being the lowest strength was sought to be appropriate choice for the formulation.

Carbopol 934P, Eudragit RL100, and polyvinyl pyrrolidone polymers were used in preparation of films. Propylene glycol, diethyl phthalate were used as plasticizer and dimethyl sulfoxide as penetration enhancer. Buccal films were prepared by solvent casting technique. Small films of 2 cm diameter, 0.2-0.3 mm thick and containing 5 mg drug were punched out from the cast films using a specially fabricated punch. The formula for various formulations attempted has been given in Table 1.

Polymethacrylate copolymer (Eudragit RL100) 2.5% w/v was dissolved in acetone and propylene glycol as a plasticizer was added to formulate backing membrane as described by solvent casting technique. Composite patches were prepared by sticking the impermeable backing membrane to one side of buccal patch with Araldite®.

An acidic or alkaline formulation is bound to cause irritation on the mucosal membrane and hence this parameter assumes significance while developing a mucoadhesive formulation.The surface pH was determined by the method similar to that used by Bottenberg et al. A combined glass electrode was used for this purpose [9,10].

Test for content uniformity is an important parameter since it establishes uniform distribution of active ingredient in all the formulations 3. Three patches were cut at random locations from the drug-loaded film. Each film was dissolved in 25 ml acetone:alcohol (1:1) and heated in boiling water bath and diluted with distilled water to get concentration in the range of 10 μg/ml. Colorimetric determination was made at 550 nm using suitable reagents.

The drug release was determined using USP dissolution test apparatus Type II thermostated at 37±1° and stirred at rate of 50 rpm. Sink condition was maintained throughout the study. Each film was fixed on a glass slide with the help of cyanoacrylate adhesive so that the drug could be released only from upper face. Slide was immersed in vessel containing 250 ml simulated salivary solution (pH 6.2). Aliquots of 5 ml were withdrawn at different intervals and replaced with equal volume of dissolution medium. The samples were assayed spectrophotometrically at 550 nm and cumulative amount of drug release at various time intervals was calculated.

The diffusion study was carried out by using Keshary- Chein diffusion cell. The method used rat peritoneal membrane as the model mucosal membrane. The membrane was placed between the donor compartment (salivary pH 6.2) and the reservoir compartment (phosphate buffer pH 7.4, blood pH) to mimic the physiological conditions. The diffusion cell was thermostated at 37±1° at rate of 50 rpm. Aliquots were withdrawn at suitable intervals and assayed spectrophotometrically.

Selected formulations were subjected to aggravated conditions of temperature. The buccal films were stored at 37±0.5° and 45±0.5° over a period of four weeks.After four weeks, films were tested for change in surface pH, drug content, in vitro bioadhesion study and in vitro release profiles.

To ensure the compatibility of the drug with polymers preformulation studies were done using IR spctrum recorded on Impact-410 Nicolet,USA FT-IR by preparing the KBR disk. The IR characterstics of Isosorbide dinitrate with the polymers resemble almost the IR structural characteristics of pure Isosorbide dinitrate indicating the compatibility between the drug and polymers.

The surface pH for formulations was found to be in the range of 6.43 to 6.73 because carbopol is acidic in nature. The surface pH for all the formulations was well within range of salivary pH, and hence should not cause irritation and ultimately achieve patient compliance. The results of swelling study are shown in fig. 1. The percentage swelling was in the order of F2>F5>F1>F4>F6>F3. The percentage swelling property of Carbopol 934P was reduced by addition and increasing ratio of Eudragit RL100 and increased by addition of PVP. The decrease in percentage swelling causes a decrease in drug release from the matrix. 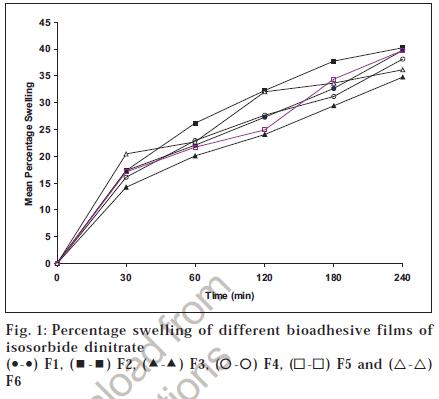 There is no much variation in the weight of the films, they were found to be 45.3, 47.0, 49.6, 45.0, 46.0, and 44.6 for the formulations F1, F2, F3, F4, F5, and F6, respectively. The little variation observed may be due to sampling error.The film thickness was within the range of 0.2 to 0.25 mm. However the little variation in thickness between different formulations may be due to release profiles. The mean folding endurance values were found to be in the range of 116.3 to 157.6 for all formulations. The folding endurance of the film was optimum and therefore the films exhibited good physical and mechanical properties. 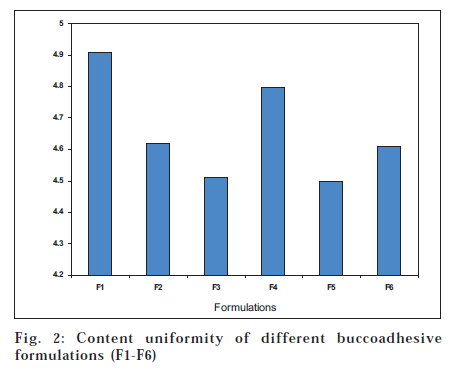 The data clearly shows that percentage release of Isosorbide dinitrate was maximum 93.83% and 95.93% for formulation containing Eudragit RL100 and PVP (1:2) by using plasticizer diethyl phthalate and propylene glycol, respectively, and 84.82%, 86.60% in combination of equal ratio, i.e., 1:1 of both polymers. Increasing the ratio of Eudragit RL100 comparatively reduced the drug release, i.e., 65.94 and 72.38%.

The polymer erosion was rate-controlling step in the drug release. When swellable polymer matrix was made by incorporating Eudragit RL100 with the polymer solution, delay in dissolution of polymer occurs. This leads to controlled release of drug from mucoadhesive films.

Optimized formulations were subjected to two different aggravated conditions of temperature 37±0.5° and 45±0.5°. Various studies were done for performance of films, which were: surface pH, content uniformity, in vitro bioadhesion, in vitro diffusion. There was no significant change observed in drug content and surface pH.