An increasing interest in the development of novel mucoadhesive buccal dosage form meant for systemic delivery as well as local targeting have been seen in recent years. Buccal delivery leading to transmucosal absorption of a drug into the systemic circulation offers a number of advantages for drugs that suffer from extensive first pass metabolism and poor bioavailability. Higher bioavailability, administration of lower doses, avoidance of liver and/or gastrointestinal metabolism and irritation of the gastrointestinal membrane, high permeability due to rich blood supply, reduced risk of overdose, non-invasive administration, convenience of selfmedication, improved patient compliance, feasibility of benefi cial adjunct product to an existing product and reduced risk of infectious disease makes buccal mucosa an attractive alternative route for systemic delivery of drugs [1,2]. The pH of the medium and pKa of the drug may affect the release profile [3]. Weakly basic drugs like ondansetron hydrochloride with pH-dependent solubility can experience problem on release from controlled release dosage forms [4]. Penetration of fluid with higher pH may cause conversion of more ionizable drug to a less soluble base and therefore diffusion of the drug from the matrix. Because of which, formulation of weakly basic drugs for oral administration can be expected to result in particularly variable release rates with changes in pH of the surrounding fluids [5]. The objective of transmucosal formulation designs for weakly basic drug is enhancing the bioavailability and reduce variability. Polymeric film coating is frequently used to control drug release from solid pharmaceutical dosage forms [6-10]. An anionic polymer, sodium alginate has been reported to produce pHindependent release of a basic drug, verapamil HCl from a hydrophilic HPMC-based matrix tablet where sodium alginate has altered the pH in the matrix tablets [11]. The permeability of a non-ionized drug is likely to increase across an epithelial barrier, and this may be achieved by a change in pH of the drug delivery system [12-14]. Absorption of some drugs via the buccal mucosa is found to increase when carrier pH is lowered [4]. Increasing levels of pH modifiers progressively enhance drug release. The incorporation of pH modifi ers such as citric, fumaric or sorbic acid is a common approach employed with matrix and coated systems [15-18], but not very common with buccal adhesive drug delivery systems [19]. Release of weakly basic drug from swellable tablets prepared with hydrophilic polymers was enhanced by incorporating pH modifiers, such as succinic, fumaric or adipic acid [18,20,21]. The addition of fumaric acid to drug/ alginate-based matrix systems have decreased the microenvironmental pH within the tablets and resulted into increase in the solubility of the weakly basic drug at higher pH [4].

Ondansetron is a serotonin (5-hydroxytryptamine) subtype 3 (5-HT3) receptor antagonist used in the management of nausea and vomiting associated with cancer chemotherapy, radiotherapy and surgery. Ondansetron has been reported to produce adverse events such as, headache, constipation and diarrhea, which are mild to moderate and rarely require treatment. Following oral administration, it is absorbed rapidly but extensively metabolized by liver. Antiemetic drugs tend to be discharged by vomiting [22], but on the contrary, intravenous administration renders rapid effects to a patient, but the onset is too rapid to cause undesirable effects with local pain [23].

Therefore, in an attempt to prepare buccal mucoadhesive formulations for rapid delivery devoid of fi rst pass metabolism, this study was undertaken to formulate a buccal mucoadhesive drug delivery system for ondensetron. Investigations were further directed to evaluate the effect of pH modifi ers, citric acid (CA) and sodium bicarbonate (SB), on in vitro permeation, drug release and formulation properties.

The three polymers Carbopol-934, sodium alginate and gelatin (C:SA:G) were used in combinations to prepare bioadhesive tablets of ondensetron HCl by direct compression method using a 10 station rotary tableting machine (Rimek Minipress-I, India). All the ingredients were sieved before use (No. 200, 75 μm). Accurately weighed quantities of drug (8 mg/tablet), polymer (varying drug: polymer ratio from 1:1 to 1:5) and diluent microcrystalline cellulose with added magnesium stearate (2%) were mixed and compressed, using 6.0 mm standard concave punches keeping the weight of tablet constant to 100 mg. Prepared tablets were evaluated for weight and content uniformity, hardness, thickness, friability and disintegration characteristics as per pharmacopoeial (IP-96/ USP-24) specifications. In addition to the above properties prepared tablets, formulations were also evaluated for microenvironmental pH, in vitro release, bioadhesion, water uptake and in vitro permeation.

The release of the drug exhibiting pH-dependent solubility is largely dependent upon the pH of the microenvironment [24] and release of weakly basic compound has been enhanced by incorporating adipic acid and fumaric acid [16,18,21,25]. Microenvironmental pH of tablets was determined by allowing the tablets to swell for 2 h in 4 ml distilled water (pH 6.5±0.05) in a fabricated glass tube. A pH-electrode was kept in contact with the tablet surface, equilibrated for 1 min and microenvironmental pH was determined by potentiometry [26].

Weight required for detachment of tablets from the porcine buccal mucosa was determined by using a bioadhesion test assembly [27]. Fresh porcine buccal mucosa obtained from the slaughter house was freed from underlying fat and tissue, washed with distilled water and then with phosphate buffer 6.8 at 37°. Mucosa cut into pieces was placed in phosphate buffer pH 6.8 for 5 min. Each individual piece was tied to a previously balanced (with 5 g) tefl on block keeping mucosal side upward which is then lowered into the beaker containing phosphate buffer pH 6.8 maintained at 37 ± 0.5. Tablets under test were moistened and stuck to the hanging cylinder on left hand side. The balance beam was raised with the removal of 5 g weight from right pan lowering the tefl on cylinder along with the tablet with a force of 5 g and kept in this position for 3 min. The weight was increased gradually, till the tablet separated from the mucosa. The weights added in the right pan represent the bioadhesive force required to separate from mucosa.

In vitro drug release was determined by USP method- II at a temperature of 37 ± 1° and paddle speed of 50 rpm using 500 ml phosphate buffer. Six tablets were selected from each formulation and placed in each vessel. Ten milliliters of sample were withdrawn at 1 h interval for 10 h. The sample was then fi ltered and analyzed for ondensetron HCl spectrophotometrically at 310 nm.

Due to comparable water permeability and morphological similarities with human buccal mucosa, porcine buccal mucosa can be used for evaluation of drug permeability [32,33]. In vitro permeation of ondansetron HCl from tablets through the excised porcine buccal membrane was studied [5,30]. Porcine buccal tissue of domestic pigs was obtained from slaughter house and stored in phosphate buffer pH 6.8 at 4°. The membrane was mounted over Franz diffusion cell and tablet placed on the membrane and compartments were clamped together. The donor and receptor compartment was filled with buffer of 6.8 and 7.4, respectively at 37°. One millilitre sample was withdrawn from receptor compartment at predetermined time and estimated UV spectrophotometerically [34,35].

The pH specificity of the drug or the formulation may often affect the controlled release profile. Weakly basic drugs with pH-dependent solubility can experience problems on release from controlled release dosage forms in oral cavity. However, this effect is dependent on pKa of the drug and related to pH of the surrounding fl uids. Therefore an attempt was made to study the effect of an organic acid and base on the release and permeability of buccal adhesive ondansetron tablets.

On the basis of microenvironment pH, in vitro drug release and in vitro bioadhesive strength, formulation (C:SA:G, 2:0.5:6.5) was selected for evaluating the effect of pH modifi ers on formulation characteristics. Citric acid and sodium bicarbonate sieved (Sieve No. 200) and incorporated in concentrations 1-5% w/w mixed intimately and compressed. These prepared tablets were then evaluated for microenvironment pH, bioadhesive strength, water uptake, in vitro release and permeation.

Statistical analysis of the data obtained from the studies was carried out with either one way analysis of variance (ANOVA) and post hoc Dunnett test or two way ANOVA followed by post hoc Bonferroni comparisons. 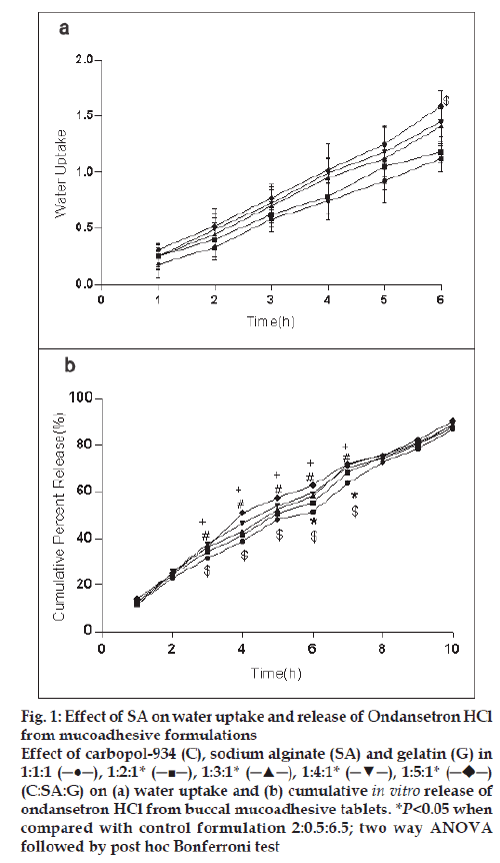 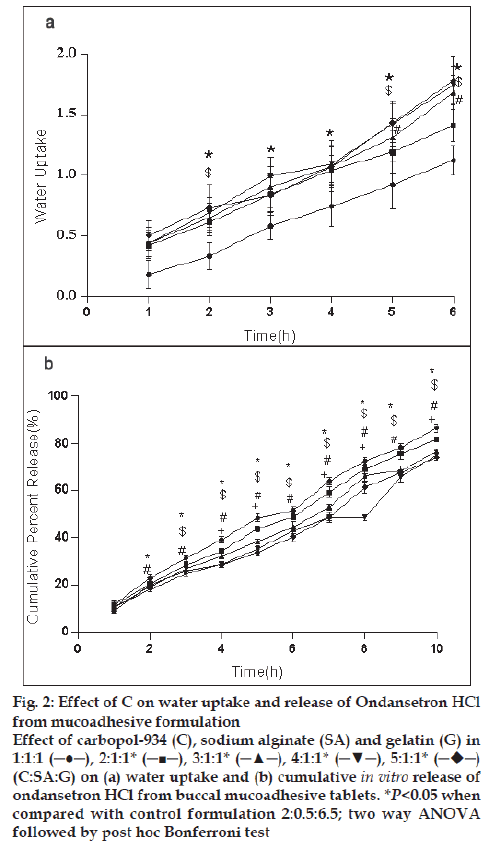 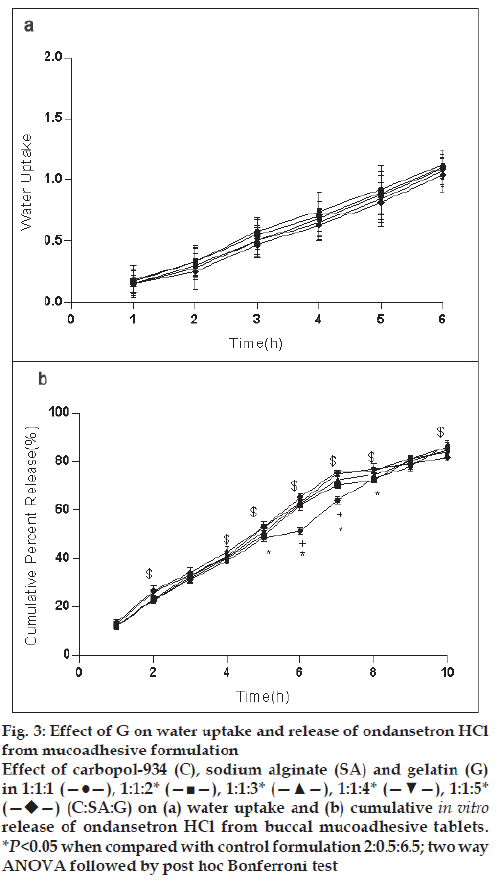 Ondansetron HCl was found to release more rapidly from the formulation with lower concentrations of carbopol-934 (fig. 2a) as compare to formulation with similar contribution of other polymers. An increase in the polymer concentration increases viscosity of the gel as well as forms gel layer which increases the diffusional path. This could cause a decrease in the effective diffusion coefficient of the drug and therefore a reduction in release rate of drug [39]. Increased gelatin resulted in decreased ondansetron release (fig. 3b). The release of ondansetron could be prolonged and controlled by carbopol and gelatin in a concentration dependent manner. Similar results are reported by Mohammed and Khedr [36].

Based on the above mentioned studies on microenvironment pH, in vitro bioadhesion, water uptake and in vitro release, tablet formulation containing C:SA:G in proportions 2:0.5:6.5 of ondansetron HCl were prepared and used to investigate the infl uence of citric acid and sodium bicarbonate on formulation characteristics.

The mean microenvironment pH values after 2 h decreased (Table 2) with the increasing concentration of citric acid from 1% to 5% w/w (F=28.26, P<0.05) and increased with the increasing sodium bicarbonate concentration (F=19.31, P<0.05). This increase in the microenvironment pH could be attributed to increase sodium bicarbonate concentration which being a base has pH of 8.3 (freshly prepared 0.1 M aqueous solution at 25º) [22]. Earlier reports are available on the incorporation of acidic pH modifi ers enhanced the drug release by creating a more acidic microenvironment, increasing the solubility and dissolution rates. The enhanced release of weakly basic drugs by incorporated pH modifiers occurs mainly through modulation of the pH [20]. Addition of citric acid to the formulation (C:SA:G; 2:0.5:6.5) decreases microenvironment pH, water uptake and drug permeation in a concentration dependent manner. Increased sodium bicarbonate was found to increase the microenvironment pH, water uptake, drug permeation but decreases the bioadhesive strength. The buccal delivery system of ondansetron HCl formulated in this study was feasible for buccal administration, and use of pH modifi er can be used for controlled and desired release profile.