N-Methyl-2-pyrrolidone (NMP) is the lactam of 4-methylaminobutyric acid. It is colorless with high boiling point, low viscosity, low toxicity and good biocompatibility [1]. It is a water miscible organic solvent used as a good solvent for sparingly soluble drugs in water. The solubility parameter of NMP is similar to that of ethanol and dimethyl sulfoxide (DMSO) [2]. NMP increased transdermal absorption of some drugs such as phenolsulfonphthalein, ibuprofen and flurbiprofen [3,4] and also estradiol [5]. Atrigel- is the commercial injectable system based on poly (DL-lactide) in NMP used for the periodontal therapy [6,7].

Like other surfactants when dispersed in the liquid, at low concentrations, exist individually as monomolecular micelles. This leads to a decrease in the surface tension, as well as surface free energy. The increasing concentration of the polymer in system results in the formation of multimolecular aggregates [8,9]. Polypropylene oxide (PPO) forms central hydrophobic core wherein methyl groups interact via van der Waals forces with substance undergoing solubilization. However, water solubility is believed to be due to the polyethylene oxide (PEO) block by hydrogen bonding interactions between ether oxygen and water molecules. Micellar behavior of different block copolymers is found to be dependent upon solvent composition and temperature [10-12]. Micelle structure consists of hydrophobic PPO block lying in the micelle core and the PEO block in the corona [13,14]. These copolymer molecules aggregate into micelles when the temperature is increased. This micellization is due to the dehydration of hydrophobic PO blocks, which represents the early step in the gelling process. These micelles are spherical with a dehydrated PPO core with an outer shell of hydrated swollen PEO chains [15]. This micellization was followed by gelation for sufficiently concentrated samples. Gel strength increased with increase in temperature and concentration of Poloxamer 407. This polymer facilitated the solubilization of poorly water soluble molecules such as indomethacin [16], insulin [17] and piroxicam [18].

Some substances such as salts, surfactants, polymers, cosolvents showed marked effects on micellization, clouding and solubilization behavior of LF127 solutions. The addition of sodium chloride could lower the critical micelle concentration (CMC), whereas the addition of urea could increase the CMC. While the addition of sodium dodecyl sulphate caused the formation of polymer-sodium dodecyl sulphate complex or mixed micelle indicating polyelectrolyte nature [19]. Some solvents like ethanol and glycerol triacetate could exhibit amphiphilic behavior and act as cosurfactants by preferably locating at the interface between the PEO-rich and the PPO-rich domains. Diclofenac, ethanol and propylene glycol weaken LF127 gel, whereas sodium chloride, sodium monohydrogen phosphate and glycerine exhibited the opposite effect [20,21]. However, the effect of NMP on the characteristics of LF127 system has not been reported.

LF127 and NMP can be employed for the development of injectable dosage forms owing to their good biocompatibility. Due to the ability of NMP to enhance the aqueous solubility of poorly water soluble drugs, it is a good candidate to be used in LF127 system. The aim of our study was to develop the thermosensitive gels of NMP using LF127 as a gelling agent. The effect of NMP on physicochemical properties of gels was investigated including appearance, pH, gelation and gel melting temperature and rheology. The antimicrobial activity of the system containing NMP was first reported in this study.

Evaluation of physical properties of gel

The appearances of the systems such as color and homogeneity were observed visually. The pH values of the systems were measured using a pH meter (Professional Meter PP-15 Sartorius, Goettingen, Germany). All measurements were performed in triplicate.

The test tube inverting method as described previously [22,23] was employed to roughly determine the phase boundary. Gelation and gel melting temperatures were assessed using a modification of the previously reported technique [22]. Five millilitre aliquot of gel was transferred to a test tube (internal diameter of 1.8 cm) and sealed before immersing in a thermostat water bath at 4°. The temperature was controlled at the heating rate of 0.2°/min, and the transition temperature was monitored at an accuracy of ±1°. The samples were then examined for gelation, which was said to have occurred when the meniscus would no longer move upon tilting through 90° (n=3). The gel melting temperature, the temperature at which a gel started flowing upon tilting through 90°, was recorded (n=3).

The rheological behavior of prepared systems was investigated by recording their shear stress (F) as a function of shear rate (G) with a Brookfield DV-III Ultra programmable rheometer (Brookfield Engineering Laboratories. Inc., USA). To test the effect of temperature, the measurements were conducted at three different temperatures (4, 28 and 35°) (n=3). These three conditions were selected to represent the temperature in refrigerator, room temperature and temperature of human body, respectively. The continuous check for viscosity change with temperature was rather difficult to perform since there was notably different apparent viscosity of system at different temperature to measure with the same cone of the rheometer. Rheological behavior of the gels is expressed as N value (flowing parameter) of the Martin’s equation [24] given by, Log G=NLog F?Log ?'...(1), where ?' is apparent viscosity. For N value of 1 or close to 1, a rheological behavior is Newtonian and for N value not equal to 1, a rheological behavior is non-Newtonian but are dilatant (if N>1) and pseudoplastics (if N<1), or plastics if yield value was able to be determined [24].

Antimicrobial activity of the samples was tested using an agar cup diffusion method. The standard microbes used in this study were Staphylococcus aureus (ATCC 6538P), Escherichia coli (ATCC 10536) and Candida albicans (ATCC 17110). Ampicillin disc (10 µg) was used as a standard reference. The culture media for antibacterial and antifungal assay were TSA and SDA, respectively. The actively growing broth culture of microbes was prepared and the turbidity was adjusted to contain approximately 108 cells/ml. Then, the swab was spread onto the agar plate in three directions to cover whole plate. The sterilized cylinder cups were then placed carefully on the surface of the agar. The samples were filled into the cup and incubated at 37° for 24 h. Antimicrobial activities were determined by measuring diameters (cm) of clear zones of growth inhibition. The tests were carried in triplicate.

The 20% w/w LF127 gel base was transparent liquid at 4° whereas the transparent semisolid gel was formed at 27 and 37°. The 20%w/w LF127 systems containing <40% w/w NMP were transparent liquid at 4° and the preparations containing >50% NMP exhibited as cloudy gel. On the other hand, at 27° and 37°, the prepared systems containing <40% w/w NMP exhibited as transparent gel and the systems containing more than 50% w/w NMP exhibited as transparent solution. These results indicated that the appearance of LF127 systems was affected by the amount of NMP. The phase behavior and microstructure of poloxamer block copolymers was also affected by various organic solvents such as glycerol, propylene glycol and ethanol [25]. It was shown that although polar and completely miscible with water, the PEO-resembling and the PPO-resembling solvents such as NMP could affect the curvature of the self-assembled structure in opposite directions. The PEO-resembling solvents are located in the polar PEO-rich domains far from the interface and increase the curvature. The PPO-resembling solvents are preferably located in the relatively apolar PPO rich domains and at the interface affecting the curvature constant. 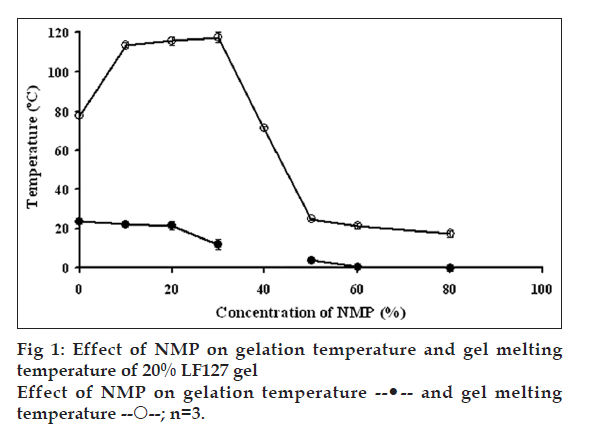 Flow curves of the systems comprising 20% w/w LF127 and different concentrations of NMP at different temperatures, 4, 27 and 37°, are shown in figs. 2, 3 and 4, respectively. The incorporated NMP caused an apparent change in the flow curve of the LF127 system. The flow curve shifted from low to high shear stress along the temperature increased when the concentration of NMP was less than 20%. The unique flow curve with initially increased and subsequently rapidly decreased shear stresses was evident for the systems containing 50 and 60% NMP at 4° because their initial gel strength was destroyed after shear rate was enhanced. As the concentration of NMP was higher than 50%, the flow curve shifted from high to low shear stress when the temperature increased. The change of temperature slightly affected the flow of systems containing 30-40% w/w NMP. The flow curve of system was the non-Newtonian behavior that the up curve did not coincide with the down curve indicating the presence of thixotropy, with a hysteresis loop. But the area of the hysteresis loop of all prepared systems did not increase as the NMP concentration increased. This result suggested that NMP could not enhance the thixotropic properties of the gel. However, the flow curve moved to a higher shear stress value, indicating the higher gel compactness [30]. 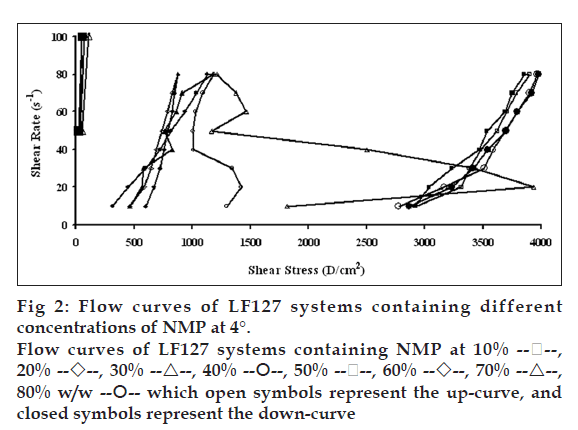 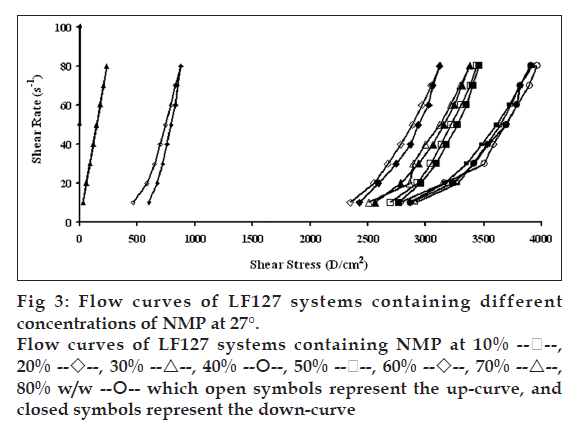 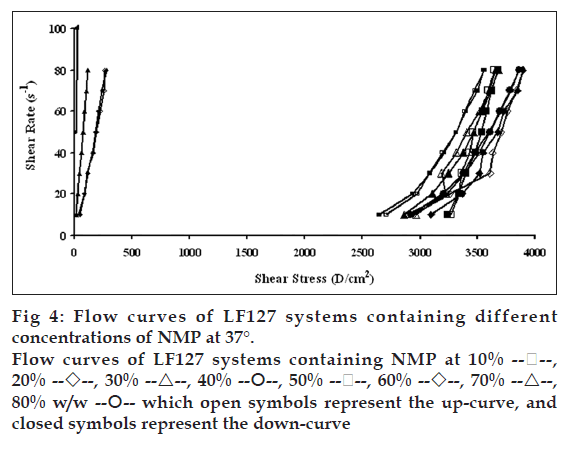 Antimicrobial activity of gels containing different concentrations of NMP against S. aureus, E. coli and C. albicans (fig. 5) were tested by agar diffusion method. Antibacterial activity against S. aureus and E. coli was increased as the amount of NMP was increased from 20-40% w/w while antifungal activity against C. albicans was enhanced by increasing the NMP amount. The gel base did not exhibit the clear zone. The inhibition zones of pure NMP against S. aureus, E. coli and C. albicans were 1.9±0.1, 2.0±0.2 and 3.5±0.1 cm, respectively (fig. 6) hence NMP could inhibit all tested microbes. The solubility parameter of NMP is similar to those of ethanol and DMSO [34]. Therefore, NMP could solubilize the lipid in cell membrane and promote the leakage of microbial cell membranes. 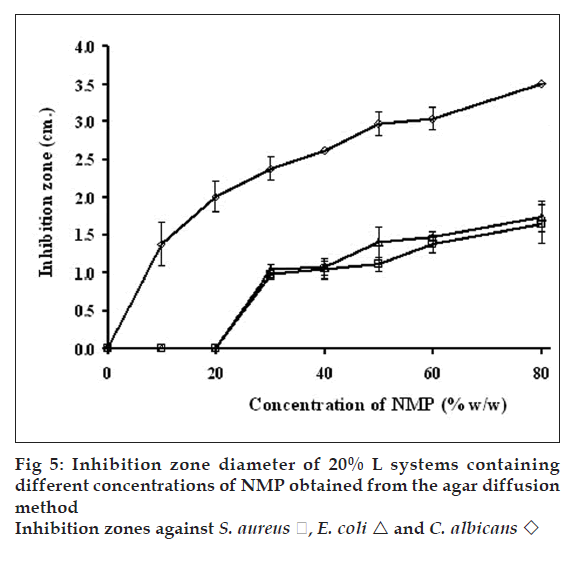 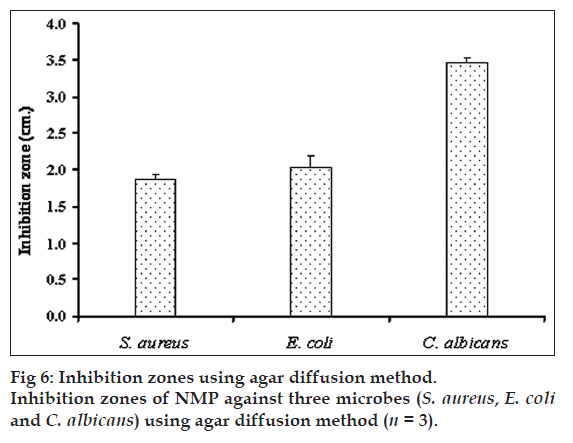 This work was kindly supported by the Research, Development and Engineering (RD&E) Fund through National Nanotechnology Center (NANOTEC), National Science and Technology Development Agency (NSTDA), Thailand (Grant No. NM-B22-NE6-17-50-13) and the Faculty of Pharmacy, Silpakorn University. We appreciate Dr. Sumalee Wannachaiyasit and Dr. Nalinee Poolsup for their invaluable comments during the preparation of the manuscript.