Characterization of Phenolic Constituents and Pharmacological Activity of Achillea vermicularis

The aim of the present study was to compare for the first time, the antiinflammatory, antioxidant and antiurease activities of 15 different extracts of Achillea vermicularis, which were obtained from three extraction methods using five different solvents. Phenolic contents in chloroform extract showed strong antiinflammatory and antioxidant activity and were analysed by high-performance liquid chromatography with diode-array detection and confirmed by liquid chromatography quadrupole time-of-flight mass spectrometry. The active phenolic compounds in chloroform extracts were identified as chlorogenic acid, caffeic acid, rutin, dicaffeoylquinic acid, naringenin, quercetagetin 3,6-dimethyl ether, and 8-hydroxy-salvigenin. All these compounds except caffeic acid were detected for the first time in Achillea vermicularis. These results indicated that chloroform extract of the plant possessed a high potential to be used as a natural source in food and pharmaceutical industry.

The genus Achillea L. belongs to Asteraceae (Compositae) family contains more than 100 species. These species have hairy and aromatic leaves and occurs in Europe and temperate areas of Asia and a few grow in North America [1]. Many species of this genus has been commonly used in folk medicine for the treatment of fever, cough, bronchitis, asthma, skin inflammation, stomach ailment, gastritis, and bladder stones and liver ailments [2]. The aerial parts of different species of Achillea have been used widely in folk medicine for the preparation of remedies with antiinflammatory spasmolytic, haemostatic, digestive, antiphlogostic, and cholagogue effects [3]. The genus Achillea comprises flavoured species, which produce intense essential oils contain monoterpenes and sesquiterpenes compounds. These essential oils exhibit antibacterial, antifungal, and antioxidant properties [1,3,4]. It has been reported that extracts of Achillea sp. exhibited antimicrobial, antihypertensive, antihyperlipidemic, antispasmodic, antidiabetic, antispermatogenic, antifertility, and immunosuppressive activities [5]. The chemistry of the members of this family has been extensively studied and up to now more than 28 compounds have been identified [3]. Achillea sp. were reported to contain essential oils, sesquiterpenes, terpenoids, lignans, amino acid derivatives, fatty acids, alkamides (p-hydoxyphenethylamide IV) and phenolic compounds like flavonoids and phenolic acids [1,6].

Achillea sp. is one of the most valuable and economical plants of Anatolia. Herbal teas prepared from aerial parts of different Achillea sp. have traditionally been used for antiphlogostic, spasmolytic, and as an antiinflammatory agent for the treatment of rheumatic pain. Achillea vermicularis Trin. is a member of the genus Achillea L. and its flowers have been used in the treatment of diarrhoea and against kidney pains. In addition, the capitulum of the plant is used in the treatment of asthma [7,8]. The main constituents of essential oil from plant aerial parts were analysed as 1,8-cineole, camphor, borneol, piperitone and camphor [9,10].

Helicobacter pylori causes chronic inflammation in stomach and duodenum and is the common cause of gastric and duodenal ulcers worldwide. This bacterium releases urease that converts urea into ammonia. This enzyme produces an alkaline environment that makes it suitable for bacterial growth and manifestation of the disease [11]. For the past 20 y, the recommended first line therapy for H. pylori eradication consisted of a combination of a proton pump inhibitor, omeprazole, and antibiotics including amoxicillin and clarithromycin. However, the increased H. pylori resistance for these antibiotics (especially clarithromycin) has made this treatment an unattractive option in recent years [12].

More recently, numerous studies have been carried out on antiurease activity of plant extracts, partially purified fractions, and natural compounds [13]. Herbal teas prepared from some Achillea species have been traditionally used for abdominal pain and flatulence in Turkey [1]. Therefore, in this study, antiurease activities of different extracts from A. vermicularis were investigated for the first time.

A great deal of attention has been given to the involvement of free radicals in chronic disease processes. Oxidative stress is an imbalance between reactive oxygen species levels and low antioxidant mechanism activity. The oxidative stress plays an important role in inflammation diseases [14]. Inflammation is the first response of the body to an infection or injury. Researching natural compounds that interfere with these mechanisms by preventing long-term inflammation can be beneficial to human health [15]. Epidemiological research has revealed a negative relationship between natural products and chronic diseases (chronic inflammation, cancer). These physiological functions of natural products could partly be attributed to the abundance of phenolic compounds. These phenolic compounds have significant biological activity such as antioxidant, antiinflammatory, antimicrobial, anticarcinogenic [15-17].

Therefore, the present study was aimed at obtaining 15 different extracts from A. vermicularis using maceration, Soxhlet and ultrasonic extraction methods to examine their antioxidant and antiurease activities, and to evaluate their antiinflammatory activities in vitro. The phenolic compound composition in the chloroform extracts using maceration was analysed using high-performance liquid chromatography with diode-array detection (HPLC-DAD) and confirmed by liquid chromatography tandem mass spectrometry (LC-MS/MS).

Aerial parts of Achillea vermicularis Trin. were collected from Elazığ, Turkey in June and during flowering period. The species was authenticated and a voucher specimen (MARE-18071) was deposited at the Marmara University Pharmacy herbarium for future reference. The dried parts of the plant were powdered using a mechanic grinder (Renas, RBT1250). Three different extraction methods were followed to prepare crude extracts from this plant aerial part.

The extraction yield was calculated to determine the effectiveness of the solvent on phenolic compounds in plant extracts. The total phenolic contents of the extracts prepared using three different extraction methods were determined using the Folin-Ciocalteu reagent (FCR) method and the results obtained were expressed as mg gallic acid equivalents/mg extract (GAE/mg) [18].

In vitro evaluation of antioxidant activity:

Antiurease activities of the 15 extracts of A. vermicularis were evaluated using the indophenol method with some modifications and the results were expressed as percent enzyme inhibition [23].

The non-toxic concentrations of the extracts were determined using a WST-1 assay kit (Roche Applied Sciences) according to the manufacturer’s instructions. Raw 264.7 cells (22.500 cells/well) in 10 % fetal bovine serum-Dulbecco`s modified Eagle media were seeded into 96-well plates. The cells were co-incubated with the extracts and 1 μg/ml lipopolysaccharide (LPS) for 24 h at 37°. The nitrite accumulated in the culture medium was measured by Griess assay. The nitrite concentration in the samples was calculated from the standard curve of sodium nitrite [24].

Table 2: Effects of Extracting Solvents/Methods on the Antioxidant Activity of A. vermicularis Extracts

In another study by Gharibi et al, antioxidant activities of methanol (80 %) extracts of A. vermicularis leaves were screened by β-carotene-linoleic acid, DPPH., reducing power assays. The methanol extract exhibited moderate total phenolic (30.07 mg tannic acid/g), flavonoid contents (49.16 mg quercetin/g) and DPPH. (IC50 309.74 μg/ml), β-carotene-linoleic acid (80 %), and reducing power (Abs 700 nm: 0.946) activity [27]. Contrary to the above study, it was found that the amount of total phenolic contents contained in the SE was very close to that of the methanol extract of leaves. And MEW extract showed close DPPH. scavenging activity to methanol extract from leaves.

In the present study, all the three assays showed that the UC, MC and SC extracts had strong ABTS, CUPRAC and FRAP activity. In addition, the chloroform extracts obtained from 3 extraction technical exhibited higher total phenolic content values than other extracts. Consequently, strong antioxidant activity recorded in chloroform extracts could be due to the high phenolic compounds.

Statistically signiﬁcant at p<0.05; The Correlation coefficients and regression analysis were not calculated because they showed low activity.

Table 4: Urease Inhibitory Activity of Different Extracts from A. vermicularis

However there are many reports in the literature about the antiurease properties of A. millefolium and A. lycaonica, but there is no information on other Achillea species[23,32]. For this reason, the antiurease properties of 15 extracts from A. vermicularis were investigated for the first time and as a result, the ultrasonic bath method exhibited higher activity than other extraction methods.

Free radicals provoke inflammatory processes. For this reason, the use of antioxidants can attenuate inflammation. Therefore, in this study, antiinflammatory activities of chloroform extracts obtained by three extraction methods and showed strong antioxidant activity as shown in figures 1 and 2. The non-toxic concentrations of the extracts on Raw 264.7 macrophages were determined by WST-1 assay (figure 1). The cells were treated with the indicated concentrations of extracts with LPS (1 μg/ml), and incubated at 37° for 24 h. MC was applied to cells at 1.56, 3.12, 6.25 and 12.5 μg/ml concentrations. The viability of the cells was not significantly affected. On the other hand, chloroform extracts (SC and UC) were applied at 3.13, 6.25, 12.5 and 25 μg/ml concentrations. When SC and UC extracts were applied to cells at 25 μg/ml concentrations, the cell viabilities were 90.61±2.95 and 95.55±4.70 %, respectively. The cytotoxic effect of L-N6-(1-iminoethyl) lysine (L-NIL) at 10 μM concentration was evaluated on Raw 264.7 macrophages and this concentration did not significantly decrease the viability of Raw 264.7 cells. 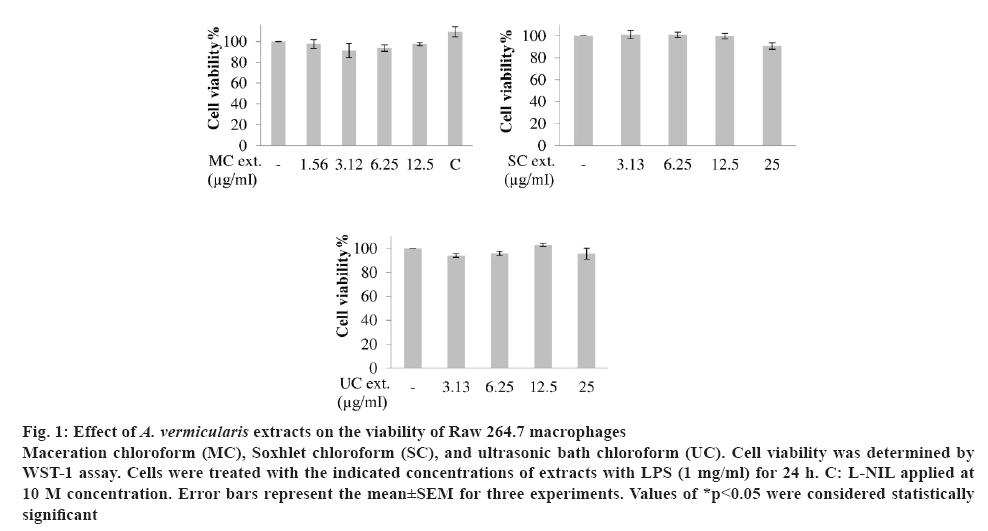 Figure 2: Effect of A. vermicularis extracts on the NO productions of LPS-induced Raw 264.7 macrophages.
Maceration chloroform (MC), Soxhlet chloroform (SC), and ultrasonic bath chloroform (UC). NO concentrations were determined by Griess Assay. Cells were co-incubated with the indicated concentrations of extracts and LPS (1 mg/ml) for 24 h. C: L-NIL applied at 10 μM concentration. Error bars represent the mean±SEM. Values of *p<0.05 vs. LPS-treated control group were considered statistically significant

Phenolic compounds in MC extract were analysed as this extract showed strongest antioxidant and antiinflammatory activity by HPLC-DAD and ESI-QTOF LC/MS. The phenolic compounds were identified as chlorogenic acid, caffeic acid, rutin, dicaffeoylquinic acid, naringenin, quercetagetin 3,6-dimethyl ether, and 8-hydroxy-salvigenin (Table 5). Three new sesquiterpene hemiacetals (achilleanone, vermiculone and vermicularone) and known compounds (β-amyrin, oleonolic acid and β-sitosterol) from A. vermicularis have previously been isolated [34]. Contrary to the above study, the effects of extraction technical and solvents on biological properties were examined in the present study. Then, the phenolic compounds in chloroform extract that showed strong antioxidant and antiinflammatory activity were analysed by HPLCDAD and LC-QTOF/MS. As a result, chlorogenic acid, rutin, dicaffeoylquinic acid, naringenin, quercetagetin 3,6-dimethyl ether, and 8-hydroxy-salvigenin compounds were analysed for the first time in A. vermicularis.

Table 5: The Main Phenolic Compounds in A. vermicularis Chloroformextract Identified by MS/MS

In this study, 3 extraction methods and 5 solvents were employed in order to obtain the biologically active components of A. vermicularis. It was found that, in the three extraction techniques, the type of solvent used significantly influence the extraction yield and available amount of phenolics. In the three extraction methods, the highest extract yield percent and the amount of phenolics were obtained with ethanol, ethanol-water (50:50, v/v) and chloroform, ethyl acetate solvents, respectively. Also, among the methods of extraction, the Soxhlet method is the most suitable method for obtaining the highest extract yield and amount of phenolics. The DPPH. method is highly suitable for evaluating the activity of polar compounds and in parallel with this information it was found that SEW extract, which had rich polar compounds showed the strongest DPPH radical scavenging activity. The ABTS.+, FRAP and CUPRAC methods are highly suitable for evaluating the activity of lipophilic and hydrophilic compounds. The chloroform extracts obtained from three extraction methods (especially Soxhlet method had the highest FRAP and CUPRAC activity) generally showed stronger antioxidant activity than other extracts. Also, these extracts exhibited strong antiinflammatory activity. In addition, it was found that UEA was the most suitable extract with the strongest antiurease activity. In this study, it was determined that extraction methods and types of solvents in plant biological activity were very effective. As a result, it was found that the most suitable extraction method/solvent for antioxidant and antiinflammatory activity was maceration/chloroform. In addition, the compounds that could be responsible for biological activity were analysed by ESI-Q-TOF LC/MS. As a result, chlorogenic acid, rutin, dicaffeoylquinic acid, naringenin, quercetagetin 3,6-dimethyl ether, and 8- hydroxy-salvigenin compounds were analysed for the first time in A. vermicularis. Therefore, MC and UEA extracts of A. vermicularis could be used as natural source for antioxidants, antiinflammatory and antiurease agents for food and pharmaceutical industry.

The authors state that they have no conflicts of interest.