Comparison of conventional and microwave-assisted synthesis of benzotriazole derivatives

A green chemistry approach for organic synthesis is described here, which involves microwave exposure of reactants in presence or absence of solvents. A novel and simple method has been developed for the synthesis of some benzotriazole derivatives under microwave irradiation. In addition, these compounds were synthesised also by conventional heating procedures for comparison. All the compounds synthesised were characterised by melting point, TLC, IR and 1 H NMR spectroscopy. Comparison between conventional and microwave-assisted synthesis was done by comparing total reaction time and percentage yield. The results suggest that microwave-assisted syntheses lead to higher yields within very short reaction times. On antifungal evaluation by cup plate method, all compounds showed antifungal activity. One compound showed activity similar to and two compounds showed better activity than standard antifungal drug flucanazole.

Heating reactions with traditional equipment, such as oil baths, sand baths and heating mantles, is not only slow but it creates a hot surface on the reaction vessel where products, substrates and reagents often decompose over time. Microwave energy, in contrast, is introduced into the chemical reactor remotely and passes through the walls of the reaction vessel, heating the reactants and solvents directly. Microwave dielectric heating drives chemical reactions by taking advantage of the ability of some liquids and solids to transform electromagnetic radiation into heat wherein chemical reactions are accelerated because of selective absorption of microwave energy by the polar molecules [6]. A properly designed vessel allows the temperature increase to be uniform throughout the sample, leading to fewer by-products and/or product decomposition. The use of microwave energy instead of conventional heating often results in good yields in a short time as compared with reaction by classical synthetic methods [7-9].

Nowadays, microwave-assisted organic synthesis is gaining widespread acceptance in drug discovery laboratories. The rapid acceptance of this technology parallels the rising cost of R&D and decrease in the number of Food and Drug Administration (FDA) approvals, which have led to what is termed as a productivity crisis. Reducing the cost of failure, either by failing candidates sooner or by improving the overall probability of success, is the most powerful solution to improving R&D productivity. Microwave technology, by accelerating chemical reactions from hours or days to minutes, provides quick results. From time to time, microwave heating enables chemistries that were not previously possible by classical methods, expanding the realm of structures accessible to the chemist [10].

Katritzky and Singh reported the recent applications of microwave technology in well-known cyclisation reactions for heterocyclic ring formation and in other important reactions such as nucleophilic substitution, hetero-Diels-Alder reactions, 1,3-dipolar cycloaddition [11]. Benzotriazole is also a heterocyclic compound that can be a good leaving group, acts as an ambient anion director, an electron donor, radical or carbanion precursor. Benzotriazole is easy to introduce into molecules by a variety of condensations, additions and substitution reactions. Benzotriazole derivatives are of biological, chemical and industrial importance. These derivatives exhibit a good degree of analgesic, antiinflammatory, diuretic, antiviral and antihypertensive activities [12].

Synthesis was carried out using modified reported procedures for conventional synthesis [13-17] and reactions were modified to improve the yield and purity of products. For comparison, microwaveassisted synthesis was also carried out. All solvents and reagents used for synthesis were of general reagent grade. The reactions were monitored by thin layer chromatography (TLC) with Merck precoated silica plates (GF 254). Melting points were recorded in open capillaries in a thiel’s tube melting point apparatus and are uncorrected. Infrared (IR) was recorded (KBr disc method) on a Jasco Fourier transform infrared spectroscopy FT-IR 5300 spectrophotometer. 1H NMR spectra were recorded on Varian USA Mercury Plus (300 MHz) or Bruker (300 MHz) NMR spectrophotometer. Chemical shifts are reported in ppm down field from tetramethylsilane (TMS), which is used as the internal standard. MWassisted reactions were carried out in a domestic microwave oven (Samsung M183DN) at 180 and 300 W.

General synthetic scheme was used to synthesise 1 and 5 substituted benzotriazole analogues as shown in figs. 1-3.

Fig 3: Scheme for synthesis of 1-alkylamino substituted benzotriazole (11a)

Other compounds 4b-c were synthesised in the similar manner by treating benzotriazole-5-carbonyl chloride with respective amines. Yields and melting points are given in Table 1.

5-methylbenzotriazole (1 g, 7.518 mmol) and sodium hypochlorite (18.2 ml, 1.1 g, 15 mmol, 1:0.5:0.5, 6% w/v solution in water) were mixed together and reaction was carried out by reflux using heating mantle for conventional synthesis and by microwave irradiation (180 W) using microwave oven for microwave-assisted synthesis. After completion of reaction (Reflux=2 h 45 min, microwave= 4 min 20 s) product was extracted by ethyl acetate (3×15 ml). Ethyl acetate layer was passed through anhydrous sodium sulphate. Ethyl acetate was distilled off to get the desired product [16]. The obtained product is dark yellow coloured amorphous powder after recrystallisation by toluene. Percentage yield: 72% by reflux and 85% by microwave method; MP: 180º by reflux and 182º by microwave method.

Other compounds 7b–c was synthesised in the similar manner by treating 5-chloromethylbenzotriazole with respective amines. Yields and melting points are given in Table 1.

Benzotriazole (2 g, 16.8 mmol) was taken in 50 ml RBF and 10 ml of DMF was added to RBF. Dichloromethane (6.8 g, 5 ml, 80 mmol) and potassium carbonate (2.31 g, 16.8 mmol) were added in flask. Reaction was carried out by reflux using heating mantle for conventional synthesis and by microwave irradiation (180 W) using microwave oven for microwave-assisted synthesis and monitored by TLC (chloroform). After TLC showed completion of reaction (reflux= 6 h, microwave= 4 min 20 s) product was precipitated by transferring the reaction mixture to 250 ml beaker containing ice cold water (25 ml). Product was obtained by filtering the solution and it was recrystallised by hot water to remove impurity [17]. The obtained product is white crystalline powder. Yield: 68% by reflux and 75% by microwave method; MP: 134º by reflux and 135º by microwave method.

Antifungal activity was determined using the cup plate method [18]. Before starting the study, all required apparatus such as petri plates, test tubes and cup borer were sterilized by autoclaving (121º. 115 lbs). Fungi culture of C. albicans was purified by subculturing on Sabouraud dextrose agar before carrying out the testing. From these grown colonies a single C. albicans colony was inoculated in 10 ml of Sabouraud dextrose broth and kept in incubator at 37º.

From this inoculate, 1 μl of inoculum was transferred to sterile petri plates. Solution of 400 ml of Sabouraud dextrose agar was made in distilled water and sterilized by autoclave. Twenty to thirty millilitres of this agar solution was poured in to each petri plate containing fungal culture. These plates were allowed to cool and kept in refrigerator for 20-30 min. Four cups were bored on each plate by a sterile cup borer. One hundred microlitres of respective test solution, or standard drug flucanazole (10, 50 and 100 μg/ml in 50% v/v methanol in water) was added in each cup. Vehicle control (50% v/v methanol in water) was also tested. After addition of test solutions, plates were kept in incubator at 37º for 48 h. After completion of incubation, zones of inhibition were measured. Mean% zone of inhibition for synthesized compounds against C. albicans is given in Table 2.

1-[tolylaminomethyl][1,2,3]benzotriazole (11a) was synthesised from 1-chloromethylbenzotriazole using reported method [16] with 65% yield by conventional synthesis and 75% by microwave-assisted synthesis. Table 1 shows the comparison between percentage yields and total reaction time for all synthesised benzotriazole derivatives.

Comparative analysis of percentage yields and total reaction time for all synthesised benzotriazole derivatives by both conventional method and microwave-assisted method was carried out to find out if microwave-assisted synthesis of benzotriazole derivatives adds any advantage or not. It was found that there is improvement in percentage yields of benzotriazole derivatives and also drastic reduction in total reaction time. By using microwave irradiation, reaction is possible within few minutes; and it also improves the yield. This would be highly advantageous for drug discovery laboratories where small amounts of different analogues have to be synthesised in short periods of time. This is very useful for combinatorial synthesis of new libraries of compounds. Microwave-assisted synthesis is quicker, high yielding, environment friendly and shows cleaner chemistry. 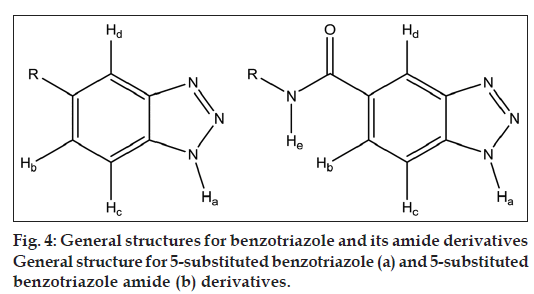 For all 5-substituted benzotriazole amide derivatives (4a, 4b and 4c) amide proton (He) showed δ value ranging between 8.482 and 10.078 δ since it is attached to nitrogen, which is attached to C=O that is electron withdrawing group, hence deshielding due to anisotropic effect [18] (fig. 4b). For compounds 4a, 7a and 8a, which are all toluene derivatives, the CH3 of tolyl and the N-H of benzotriazole showed a single signal at around 2.25 δ of four proton intensity.

After performing a comparative statistical analysis (unpaired t test) of the % zones of inhibition of all synthesized compounds with those of vehicle control, it was observed that all test compounds showed antifungal activity (p<0.05) at 50 and 100 μg/ml concentration. Unpaired t test performed between the % zone of inhibition of fluconazole (standard) and test compounds, one compound (8a) was found to show similar activity while two compounds (7a and 7c) showed greater activity and other compounds (compound 2, 4a-c, 6, 7b, 10 and 11a) showed less activity than fluconazole (Table 2).