Cancer is the uncontrolled growth of abnormal cells in the body. Chemotherapy and radiotherapy are highly effective methods of cancer treatment, but these methods exert severe side effects [1]. Gradual resistance of cancer cells against these treatment is one of the main emerging problems in cancer treatment [2]. In this regard, achieving a new approach to improve cancer treatment results is one of the aims of immunopharmacological studies [3]. Apoptosis or programmed cell death is a strictly controlled pathway that is responsible for removal of unwanted cells, old and injured cells [4]. The induction of apoptosis in tumour cells can lead to their own destruction, so apoptosis has been suggested as an efficient mechanism by which malignant tumour cells can be removed when treated with antineoplastic drugs [5].

The B-cell lymphoma 2 (Bcl-2) protein family acts as a key regulator in the intrinsic or mitochondrial apoptosis pathway [6]. Myeloid cell leukaemia type 1 (Mcl-1) is one of the most important members of the Bcl-2 protein family. Mcl-1 is highly expressed in a variety of human cancer cell lines including breast, CNS, colon, lung, ovarian, prostate, renal and melanoma [7].

Overexpression of Mcl-1 gene is exploited by cancer cells to survive, and as a mechanism for developing resistance to diverse chemotherapeutic agents [8]. There are multiple drugs that display a mechanism of action that involves down-regulation of Mcl-1. Studies with these drugs show the importance of this protein in maintenance and progression of the cancer phenotype [8].

Umbelliprenin and auraptene are terpenyloxy coumarins synthesized by F. asafoetida and citrus species. These 2 coumarins have similar structure, with the only difference being the higher length of the 7-prenyloxy chain, which contains 15 instead of 10 carbons [21]. In the present study, we examined the cytotoxicity of umbelliprenin and auraptene on various cancerous cell lines by 3-(4,5-dimethylthiazol-2- yl)-2,5 diphenyltetrazolium bromide (MTT) method and compared those together. We also tested the effect of auraptene on Mcl-1 gene expression in Jurkat cells by real time polymerase chain reaction (PCR) method and compared it with the effect of umbelliprenin on gene expression.

The effects of auraptene and umbelliprenin on the growth of cell lines were examined using the MTT assay. Cells were sub-cultured in 96-well plates at a density of 104 cells (for MCF-7, HeLa, KYSE-30) or 5×104 cells (Jurkat) per well with or without auraptene and umbelliprenin (10, 20, 40 μg/ml) for 24 and 48 h in a final volume of 100 μl. Auraptene and umbelliprenin were dissolved in DMSO. Immediately before use, it was diluted in the culture medium to obtain a final DMSO concentration of 0.5% (v/v). Then, the medium was changed with fresh medium supplemented with 20 μl of MTT (5 mg/ml in phosphate-buffered saline (PBS)). Plates were incubated at 37° for 2 h. After addition of 100 μl DMSO to each well, plates were agitated for 1 min. Spectrophotometric absorbance at 570 nm was measured. Cell viability was calculated using the formula. %viable cells=(OD of drug-treated sample/OD of untreated sample)×100.

Jurkat cells were incubated by auraptene (10, 20, 40 μg/ml) in 37° and 5% CO2 for 1, 2 and 3 h. Total RNA was isolated using RNX-Plus kit in accordance with the manufacturer's instructions (Sinagene®). The quantity and quality of the total RNA was verified with the Pico Drop spectrophotometer (Alpha Biotech, Cambridge, UK) according to the manufacturer’s instructions. Complementary DNA (cDNA) was synthesized from 2 μg total RNA treated with DNase I using TaKaRa kit (PrimeScript First Strand cDNA Synthesis Kit).

One way analysis of variance (ANOVA) test was used for statistical analysis by SPSS16 software. The P-value was considered significant when it was <0.05. Error bars indicate standard deviations. Number of readings (N) for MTT assay and real-time PCR were 3 replicate. Calculations were done with GraphPad Prism 5 (GraphPad Software, San Diego).

For comparison of cytotoxicity of auraptene and umbelliprenin, we incubated various concentrations (10, 20 and 40 μg/ml) of these compounds with HeLa (cervical cancer cell line), Jurkat (T cell leukaemia cell line), MCF-7 (breast cancer cell line) and KYSE- 30 (oesophageal carcinoma cell line) for 24 and 48 h. After these incubation periods the extent of cytotoxicity is estimated using the MTT assay. Auraptene was more cytotoxic than umbelliprenin against these cell lines (Figures 2 and 3). IC50 of these two compounds have been compared in Table 1. As shown in Table 1 cytotoxic effect is dose and time dependent. Moreover, auraptene is more potent than umbelliprenin in various concentrations and times (Table 1). 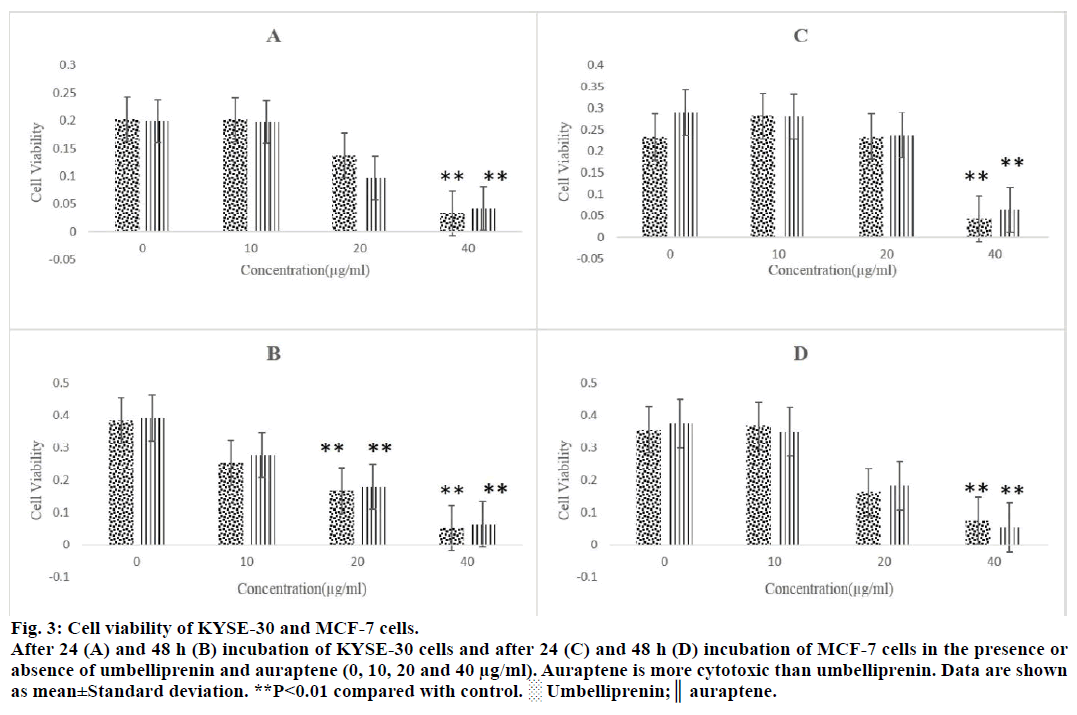 Umbelliprenin and Auraptene (10, 20 and 40 µg/ml) were incubated with HeLa, Jurkat, MCF-7 and KYSE-30 cell lines for 24 and 48 h. Cytotoxicity was tested by MTT method. IC50 was calculated for each cell line and time of incubation. As it shows cytotoxic effect is dose and time dependent. Auraptene is more cytotoxic than umbelliprenin in various cell lines and times (time and IC50 have been indicated as h and µg/ml, respectively)

Mcl-1 protein has an obvious role in the chemoresistance of certain malignancies [22-24]. Forced Mcl-1 downregulation induce apoptosis in a number of cancer cell types [25]. Thus, Mcl-1 is a potential and attractive therapeutic target in a number of malignancies and is the focus of a number of studies reviewed [26]. In our study, we tested the effect of auraptene on Mcl-1 gene expression. We incubated Jurkat cells with 10, 20 and 40 μg/ml of auraptene for 1, 2 and 3 h. After that this effect was examined by real-time PCR method. 10 μg/ ml of auraptene did not have significant effect on Mcl- 1 gene expression. But auraptene down regulates Mcl- 1 gene in other concentrations and times of incubation (Figure 4). 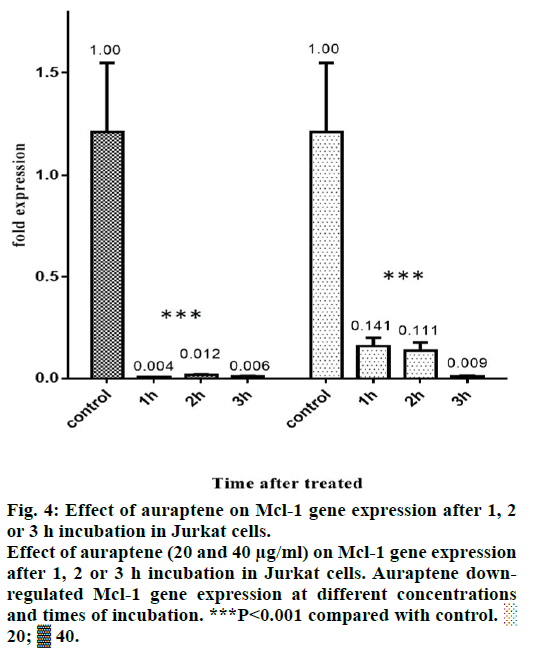 Cancer is one of the most complicated diseases of this century. Natural products are very promising compounds in treatment of cancer. Among natural products, coumarins show cytotoxic effect in vitro and in vivo. Based on previous findings we decided to compare cytotoxic effect of two natural coumarin compounds (auraptene and umbelliprenin) in vitro.

Extent of Mcl-1 gene down-regulation by auraptene is different for various concentrations and times of incubation. This can be related to the different extent of apoptosis/necrosis induction by auraptene. As it shows in Figure 4, the extent of Mcl-1 gene down-regulation in 20 μg/ml is more than 40 μg/ml. This shows that auraptene induce apoptosis more than necrosis in 20 μg/ml concentration. In 40 μg/ml auraptene induce necrosis more than apoptosis. Our findings are consistent with those reported by June (Figure 3) [5]. More studies are needed to get further clarity. Finally, it may be concluded that umbelliprenin (but not auraptene) falls into the category of apoptosis inducing agents that initially up-regulates Mcl-1 gene.

In a review regarding the structure-activity relationships and anticancer effects of natural and synthetic coumarins, the author reported that coumarins may enhance lymphocyte response to mitogen and induce immune-induced antitumor effects. The author further suggested that the effects of auraptene (and possibly umbelliprenin) would partly be due to an enhancement of immune function [32]. However, this stimulatory effect needed to be demonstrated.

There are no conflict of mentioned.