A simple, rapid, precise RP-HPLC method was developed for simultaneous estimation of aspirin and clopidogrel bisulphate in tablet dosage form used in the treatment of cardiovascular diseases. To achieve the maximum resolution, acetonitrile:50 mM potassium dihydrogen phosphate buffer:methanol, solution pH adjusted to 3, in the ratio 50:30:20; v/v was selected as mobile phase. This mixture was found to be appropriate allowing good separation of both the components at a flow rate of 1.5 ml/min and detection wavelength 240 nm. In these conditions clopidogrel bisulfate and aspirin were eluated at the 7.47 and 2.2 min. The linearity was found in the concentration range 1.5-7.5 and 3.5-15.0 µg/ml, respectively. All the analytical validation parameters were determined and found with in the limit as per ICH guideline, which indicates the validity of method.

Clopidogrel bisulphate (CPS) is methyl-2- chlorophenyl-(4,5,6,7-tertrahydrothieno[3,2-c] pyridine-5yl)acetate bisulphate and aspirin (ASP) is 2-acetoxy benzoic acid used in the treatment of cardiovascular diseases. Clopidogrel is used as platelet inhibitor and aspirin as a cyclooxygenase inhibitor [1,2]. Monographs of various pharmacopoeias describe the assay of aspirin. Literature review reveals few HPLC methods reported for estimation of both the drug as single component in different dosage form, but no method has yet been reported for analysis of these drugs in multi component dosage form [3-9]. The objective of present communication was to develop simple, rapid and precise RP-HPLC method for concurrent estimation of clopidogrel bisulphate and aspirin in tablet dosage form.

The HPLC system consisted of a solvent delivery module LC-10ATvp Shimadzu Liquid chromatograph pump equipped with 20 μl loop and model SPD M10Avp Shimadzu UV/VIS diode array detector. Integration was achieved by using the software LC- 10 [10]. Separation was carried out on a Phenomenex, (250×4.6mm) Luna 5μ C-18 (2) 100A column. The chromatographic analysis was performed at ambient temperature. The mobile phase consisted of the mixture of solvents, acetonitrile:50 mM potassium dihydrogen phosphate buffer:methanol, solution pH adjusted to 3.0 with orthophosphoric acid, in the ratio 50:30:20; v/v. The prepared mobile phase was filtered through a Millipore 0.45 μm membrane filter and ultrasonically degassed prior to use. The detection wavelength was set at 240 nm and the peak area was recorded using chromatographic data system. The flow rate and run time was set to 1.5 ml/min and 10 min, respectively. The representative chromatogram is given in fig. 1. All the system suitability parameters capacity factor, plate number, tailing factor, retention time, and resolution were optimized by freshly prepared standard solution of CPS (3.0 μg/ml) and ASP (15.0 μg/ml). 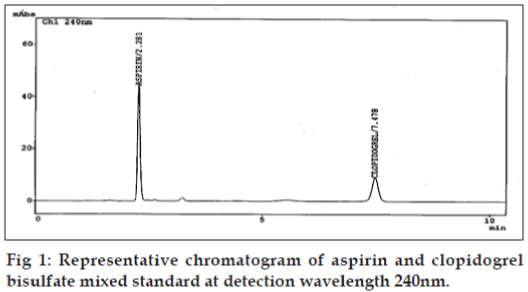 The LC Method for simultaneous estimation of clopidogrel bisulfate with aspirin combination was extensively validated as per ICH guideline for analytical method validation, for linearity, range, accuracy, precision (repeatability and intermediate precision) [11]. For linearity, series of dilutions were prepared and response ratios were determined respectively. The range was determined by preparing a series of dilutions from 80% to 120% of test concentration in six replicate. By recovery studies in which known amounts of standard drug were added to the previously analysed tablet sample and mixture were analysed by the proposed method, accuracy of methods was determined. Precision was studied for repeatability and intermediate precision (days, and analysts).

For analysis of tablet sample (Clopivos-AP-150 in the strength 75:150 mg, Cipla limited, Mumbai), twenty tablets were accurately weighed and average weight of the tablets was determined. The tablets were powdered and powder equivalent to 75 mg of CPS and 150 mg of ASP were accurately weighed and dissolved in mobile phase and volume was made-up to 10 ml. Resulted solution was sonicated for 10 min and filtered through Whatman filter paper no. 42. Solutions of different concentrations were prepared by serial dilution technique as per standard preparation and were subjected for analysis. The optimized chromatographic conditions employed (system suitability parameter) to obtain best resolution between two compounds are shown in Table 1.

*Maximum values of SD and RSD of six replicates

For standard drug, linearity was observed by linear regression equation method. The equation were, AUC=17386.4X– 459.636 for CPS and AUC=7432.58X+65.78 for ASP and correlation coefficient for both drugs were found to be more than 0.999, indicating good linearity.

The LC Method was extensively validated for simultaneous estimation of CPS with ASP combination using linearity, range, accuracy and precision. All these analytical validation parameters were observed and the RSD was found to be less than one, which indicates the validity of method.

Table 2: Results of Tablet Analysis for Clopidogrel Bisulfate and Aspirin

The authors wish to thanks, Head of the Department, School of Pharmaceutical Sciences, Rajiv Gandhi Proudyogiki Vishwavidyalaya, Bhopal, for providing necessary facilities; and Aristo Pharmaceutical, Mandideep, for supplying clopidogrel and aspirin as a gift sample. The financial assistance received from AICTE in the form of fellowship for postgraduate studies in Engineering and Technology is being gratefully acknowledged by one of the author.