The effectiveness of liposome-mediated gene transfer methods hinges, in part, on the nature of the interaction between the DNA cargo and the liposomes. Here we have examined the effect of quaternization of the cytofectin cationic head group on this interaction and the effect of concentration of the biocompatible, protective polymer polyethylene glycol2000 (PEG2000) on transfection activity. Thus 3b[N-(N’,N’-dimethylaminopropane)-carbamoyl] cholesterol (Chol-T) and 3b[N-(N’,N’,N’-trimethylammonium propane)-carbamoyl] cholesterol iodide (Chol-Q), differing only in the degree of head group methylation, have been formulated into liposomes with polyethylene glycol2000- distearoylphosphatidyl ethanolamine (DSPE PEG2000) and the neutral co-lipid dioleoylphosphatidylethanolamine (DOPE). Their DNA-binding characteristics have been determined and the gene transfer capabilities of resulting lipoplexes have been examined in HEK 293 human embryonic kidney cells. Quaternary ammonium Chol-Q liposomes were found to bind DNA more avidly than their tertiary amine Chol-T counterparts. The inclusion of PEG2000 in liposome formulations resulted in an increase in the optimal liposome-DNA binding ratio. Chol-T liposomes promoted transgene activity levels 5 times greater than those obtained with Chol-Q lipoplexes. Furthermore, a drop in transfection activity of only 17% was noted on increase of liposome pegylation from 2 to 5 mole percent. The study’s findings suggest that strong association between cationic liposomes and DNA may lead to reduced levels of transfection activity as a result of poor release of nucleic acid after cellular uptake.

The development of non-viral gene transfer techniques for gene therapy is gaining impetus largely due to the difficulties so far encountered in clinical trials with alternative viral approaches. Although generally more efficient, viral procedures are associated with a high immune response in patients and the risk of mutagenesis and carcinogenesis [1-3]. Non-viral vectors based on cationic lipids and polymers are generally biodegradable, less immunogenic [4], stable and relatively easy to synthesize [2,5]. The cationic cholesteryl cytofectins (CCCs) are amphiphilic lipid vectors that are being actively developed for gene transfer applications. Most commonly, CCCs are formulated with a neutral co-lipid into unilamellar cationic liposomes that form electrostatic complexes with DNA and RNA through charge-charge interactions between the cationic head groups of the CCCs and the anionic phosphodiester backbone of the nucleic acids [6-8]. These complexes, termed lipoplexes, self-assemble spontaneously on mixing the liposome suspension with the nucleic acid solution. The CCC structural domains include a hydrophobic cholesteryl moiety, a linker entity, a spacer region and a cationic head group (fig. 1). The nature of each of these structural features influences the transfection efficiency of the resulting liposomes. Thus it has been shown that derivatives featuring an ether linkage between the cholesteryl skeleton and the spacer yield liposomes with greater transfection potential than those with biodegradable ester or urethane links [9]. Moreover, CCCs with a 3 carbon propyl spacer appear to be more effective transfecting agents than those with the 2 carbon ethyl spacer [10,11]. However, lipoplexes may interact with serum proteins [12] and undergo rapid elimination by the reticuloendothelial system (REM) in vivo [13,14]. In an effort to overcome these difficulties and increase circulation times, some groups have anchored polyethylene glycol to the liposome bilayer to impart upon lipoplexes formed with DNA, a biocompatible hydrophilic protective outer layer [15-18]. Here we compare the transfection activities of two CCCs featuring a three carbon spacer that differ only in the degree of amine head group methylation viz. 3β[N- (N’,N’-dimethylaminopropane)-carbamoyl] cholesterol (Chol-T) and 3β[N-(N’,N’,N’-trimethylammonium propane)-carbamoyl] cholesterol iodide (Chol-Q) (fig. 2) in the human kidney embryo cell line HEK 293. In this study liposomes have been formulated to contain 2 and 5 mole percent polyethylene glycol2000 (PEG2000) to examine the influence of the polymer on transfection activity in vitro. 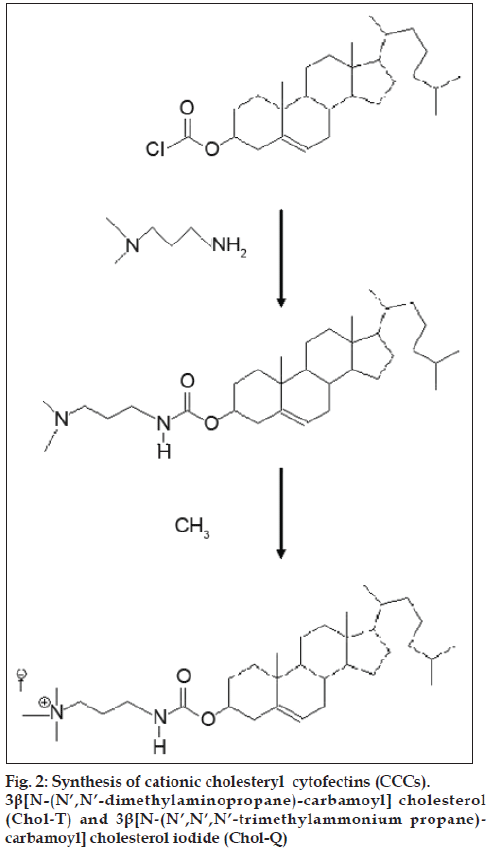 Four liposome formulations were prepared in 1 ml of sterile 20 mM HEPES, 150 mM NaCl (HBS, pH 7.5) at a total lipid concentration of 4 mM. Mixtures of Chol-T or Chol-Q with DOPE and PEG2000-DSPE at mole ratios given in Table 1 were dissolved in dry chloroform (1 ml). The lipid components were deposited as a thin film in a test tube by rotary evaporation of the solvent in vacuo at 25°. Thereafter, the film was hydrated at 4° for 24 h and the resulting mixture briefly vortexed. The suspension was then sonicated in an Elma Transsonic bath type sonicator (T 460/H) for 5 min to afford unilamellar liposomes as determined by transmission electron microscopy. Liposomes were routinely stored at 4° and retained their DNA-binding characteristics for several months (band shift assays).

Increasing amounts of the pegylated liposome preparations up to 5 μg in HBS (8 μl) were incubated with pBR322 plasmid DNA at 21° for 20 min. After addition of gel loading buffer (0.05% bromophenol blue, 40% sucrose, 2 μl) samples were subjected to electrophoresis (40V) on 1% agarose gels containing ethidium bromide (1.5 μg/ml) in a buffer comprising 36 mM Tris-HCl, 30 mM sodium phosphate and 10 mM EDTA (pH 7.5) for 90 min. Thereafter gels were viewed in a Syngene G-box under transillumination at 300 nm.

Complexes containing pGL3 plasmid (0.5 μg) and increasing amounts of 2% and 5% pegylated liposomes (4-11 μg) in HBS (10 μl, pH 7.5) were incubated for 30 min immediately prior to cell exposure. Cells (2.2×103/well) were seeded into 48 well plates, which were then incubated at 37° for 24 h to achieve semi-confluence. Wells were then drained and serum-free medium (200 μl) was added. After the addition of lipoplexes to wells, cells were incubated for 4 h at 37°. Incubation medium was removed and complete medium (containing 10% FBS and and penicillin/streptomycin) was added. After a further 36 h at 37° the medium was again removed and cells were assayed for luciferase activity using the Promega Luciferase Assay system according to the manufacturer’s instructions. Results were presented as relative light units (RLU) per mg soluble protein.

The cytotoxicity of lipoplexes towards HEK 293 cells was determined under transfection conditions described above. After the final 36 h incubation, medium was removed and MTT solution (5 mg/ml in phosphate buffered saline, 200 μl) was added to wells. The cells were then incubated for 4 h to allow for the formation of blue formazan crystals. The MTT solution was then replaced with DMSO (200 μl/well) to dissolve the formazan. Absorbance of DMSO extracts was measured at 570 nm. The percentage cell viability was then calculated as follows: [A570 treated cells – background]/[A570 control cells – background] × 100.

Chol-T and Chol-Q are two CCCs with urethane linkers joining the cholesteryl moieties to 3 carbon spacer elements onto which are appended the cationic head groups. Chol-T bears a dimethylamino head group that is protonated at physiological pH and therefore displays a positive charge, while Chol-Q has a more basic quaternary trimethylammonium group and carries a positive charge over a wider pH range. Both compounds form stable liposomes with equimolar amounts of DOPE [20]. This neutral co-lipid facilitates the formation of lipid bilayers with CCCs and destabilizes the endosomal membrane promoting release of liposome-bound DNA from the endosomes into the cytosol [21]. In this study, stable liposomes in the 40–100 nm size range (fig. 3) have been formulated to contain Chol-T and Chol-Q in equimolar ratio with DOPE and a total of 2 and 5 mole percent of DSPE PEG2000. It has been shown previously that pegylated cationic liposomes display the highest transfection activity when the hydrophilic polymer is present in the 1.9-10 mole percent range [22]. Results presented in Table 1 and fig. 4 show liposome:DNA ratios at which complete liposome association of DNA takes place (optimal ratio). These have been determined in electrophoretic band shift assays on agarose gels. Unbound, free plasmid DNA migrates into the gel and appears as two distinct bands representing the relaxed closed circular and superhelical forms of the DNA. Liposome-bound DNA however remains in wells, and therefore the least amount of liposome required to bind all the plasmid DNA in incubation mixtures may be determined yielding the optimal binding ratio. At higher liposome:DNA weight ratios, aggregates may form and float out of wells. The ratio of cationic head group positive charges on liposomes and negative DNA phosphodiester link charges (+/− or N/P) in lipoplexes may be readily calculated by assuming an average nucleotide molecular weight of 350 and one negative charge per nucleotidyl unit. Chol T liposomes containing 2% DSPE PEG2000 bound plasmid DNA more avidly than Chol-T containing 5% DSPE PEG2000 (+/− ratios 1.8:1 and 2.5:1 respectively) (figs. 4a and 4b). Chol-Q liposomes containing 2% DSPE PEG2000 however bound DNA most avidly (+/− ratio 1.1:1) (fig. 4c), whilst the binding of Chol-Q liposomes formulated with 5% DSPE PEG2000 was comparable to that of Chol-T 2% DSPE PEG2000 liposomes (+/− ratio 1.4:1) (fig. 4d). Band shift assays of 5% pegylated liposomes clearly show a gradual retardation of plasmid DNA with increasing amounts of liposomes, before end points are reached (figs. 4b and 4d). This points to a looser association between the plasmid DNA and the pegylated liposomes than that between DNA and 2% pegylated liposomes, where end points are sharper (figs. 4a and 4c). An increased shielding of the liposomal positive charge centres by the PEG chains may explain this effect. In a recent study to determine the effect of pegylation on the transfection efficiency of DC-Chol/DOPE liposomes, it was reported that low degrees of pegylation (<2%) did not affect plasmid DNA binding affinity to liposomes. However the plasmid DNA binding affinity decreased at higher degrees of pegylation up to 5% [18]. It has been suggested by the authors that the reduced binding affinity may be attributed to a reduction in the liposomal surface charge. The MTT assay, which is based on the biochemical reduction of 3-(4,5-dimethylthiazole-2-yl)-2,5- diphenyltetrazolium bromide (MTT) by viable cells, was used to determine the cytotoxicities of lipoplexes in HEK 293 cells at three liposome:DNA ratios in each case, representing below optimal, optimal and above optimal compositions. Results presented in fig. 5 a–d confirm that lipoplexes at optimal ratios were well tolerated, with viabilities in the 88-91% range when compared with untreated control cultures. 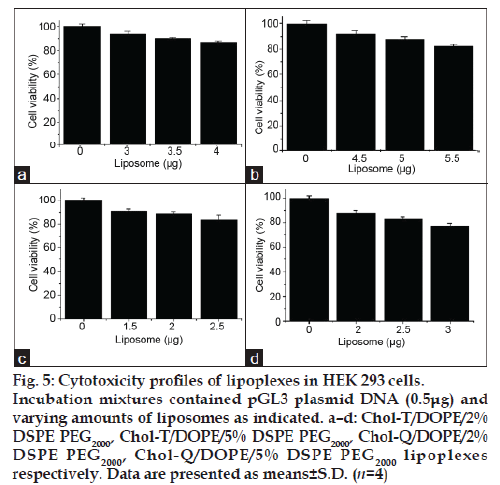 Transfections were performed with all four liposome preparations at the liposome:DNA ratios selected for toxicity experiments. Thus luciferase activity in HEK 293 cells was measured after incubation with lipoplexes bearing the pGL3 plasmid, which embodies the firefly luciferase gene. Results show that the highest transgene activity was achieved in each case at liposome:DNA ratios above the optimal binding ratios determined in band shift assays. This was particularly marked with Chol-T liposomes, where an 11% increase in the optimal +/− binding ratio resulted in a threefold increase in transfection activity ( P<0.05) (figs. 6a and 6b). The Chol-T 2% DSPE PEG2000 lipoplexes (fig. 6a) gave the highest activity which was five times greater than that attained with Chol-Q 2% DSPE PEG2000 lipoplexes (fig. 6c). The stronger binding between the more basic Chol-Q and DNA phosphates is consistent with the notion that Chol-Q liposomes relinquish their DNA cargo more reluctantly in the acidic endosomal environment than their Chol-T counterparts. Indeed, it has been reported that related cationic liposomes featuring the dimethylamino head group transfect mouse L929 cells efficiently whereas liposomes displaying the quaternary trimethylamino head group were almost inactive [23]. Transfection activity levels attained by Chol-T 5% DSPE PEG2000 lipoplexes (fig. 6b) and Chol-Q 5% DSPE PEG2000 lipoplexes (fig. 6d) were about 15% lower than their 2% DSPE PEG2000 counterparts. It has been shown that at low PEG grafting densities up to 4% the PEG chains form mushroom structures which project 3-5 nm from the liposome bilayer and do not interact laterally with each other [24-26]. Interaction of positive charge centres with plasmid DNA would therefore be relatively unobstructed. At higher grafting densities PEG chains would tend to extend further away from the liposomal bilayer (5-10 nm) and form a brush regime [26]. The hydrated outer PEG layer would more effectively shield the now relatively dehydrated lipid head groups and consequently weaken DNA-liposome interactions. 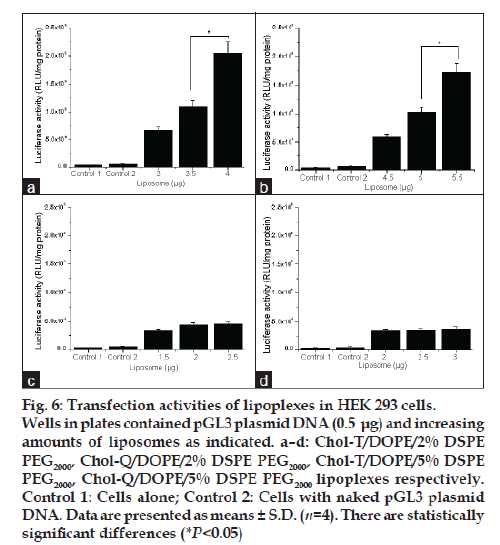 The work presented in this study highlights the challenges faced in designing effective pegylated cationic liposomes based on cationic cholesteryl cytofectins which are intended for gene transfer applications. Whilst constituent cytofectins may be basic enough to forge cohesive electrostatic interactions with the cargo DNA, strong binding may also be associated with a drop in transfection activity through poor dissociation after cell entry. Similarly, the protective effect afforded to lipoplexes by pegylation must be weighed against the drop in transfection activity at higher levels of pegylation.

This study was supported, in part, by funds from the National Research Foundation of South Africa. The advice and assistance received from Dr J Wesley-Smith of the Microscopy and Microanalysis Unit of UKZN is gratefully acknowledged.