In the present investigation an attempt has been made to increase therapeutic efficacy, reduced frequency of administration and improved patient compliance by developing controlled release matrix tablets of verapamil hydrochloride. Verapamil hydrochloride was formulated as oral controlled release matrix tablets by using the polyethylene oxides (Polyox WSR 303). The aim of this study was to investigate the influence of polymer level and type of fillers namely lactose (soluble filler), swellable filler (starch 1500), microcrystalline cellulose and dibasic calcium phosphate (insoluble fillers) on the release rate and mechanism of release for verapamil hydrochloride from matrix tablets prepared by direct compression process. Higher polymeric content in the matrix decreased the release rate of drug. On the other hand, replacement of lactose with anhydrous dibasic calcium phosphate and microcrystalline cellulose has significantly retarded the release rate of verapamil hydrochloride. Biopharmaceutical evaluation of satisfactory formulations were also carried out on New Zealand rabbits and parameters such as maximum plasma concentration, time to reach peak plasma concentration, area under the plasma concentration time curve (0-t) and area under first moment curve (0-t) were determined. In vivo pharmacokinetic study proves that the verapamil hydrochloride from matrix tablets showed prolonged release and were be able to sustain the therapeutic effect up to 24 h.

Oral drug delivery is the most common and preferred route for administration of therapeutic agents. The popularity of oral route is due to patient compliance, ease of administration, accurate dosing, cost‑effective manufacturing methods, and generally improved shelf‑life of the product. A number of strategies were developed to obtain controlled release of a drug in the body. They vary from simple matrix tablets or pellets to more technologically sophisticated controlled release systems, which have been introduced into the market place [1,2]. The advancements have come about by simultaneous convergence of many factors, including the discovery of novel polymers, formulation optimization, better drug understanding of physiological constraints, prohibitive cost of developing new drug entities and the introduction of biotechnology and biopharmaceutics in drug product design. Hydrophilic polymeric matrices have attracted many researchers due to their wide applications in controlled drug delivery. Among the various hydrophilic polymers used, polyethylene oxides (PEO) are most important materials used in the preparation of matrix tablets because of its nontoxicity, high water‑solubility and swellability [3,4]. In a research work, it has revealed that PEO can be used as alternative to hydroxylpropyl methylcellolose (HPMC) for the preparation of matrix tablets [5,6]. In the formulation of matrix tablets, various formulation factors such as the polymer type and concentration, the drug particle size, presence of additives and excipients in the final formulation can modify the drug release from the matrices [7,8]. A little information is available about the effect of excipients and additives on the drug release rate from the PEO matrix tablets. In the present investigation, the effect of various types of excipients on the matrix erosion and drug diffusion were studied. Some of the selected matrix tablets based on in vitro data were further subjected to in vivo pharmacokinetic studies on albino rabbits.

The PEO matrix tablets containing verapamil HCl was prepared by a direct compression method. Polyox WSR 303 was used as a swellable hydrophilic polymer that controls drug release rate. The Controlled release tablet formulations consisted of a drug and polymer were in the ratio of 1:0.5 and 1:1 with Polyox WSR 303 as controlled release polymer. The diluents such as lactose, starch 1500, dibasic calcium phosphate (DCP) and MCC were added at different proportions to the matrix tablets to achieve uniform weight of all the matrix tablet formulations. The drug, polymer and diluent were screened through #45 sieves and pre‑blended in a lab scale double cone blender. The lubricant such as magnesium stearate in the concentration of 0.5% was added and the blend was mixed again prior to compression. The drug blends were directly compressed by using the Elite mini press with 9 mm flat punches. The different forms of matrix tablets compressed together with their compositions are given in the Table 1.

Drug release was assessed by dissolution test under the following conditions: n=6, USP type II dissolution apparatus at 75 rpm using 900 ml of 0.01 N HCl (2 h) and phosphate buffered solution, pH 7.4 (Phospahte Buffer Solution, 24 h) as dissolution media. Dissolution studies were carried out maintaining the sink conditions for all the formulations. Total 5 ml aliquot of samples were withdrawn at regular time intervals, filtered, and assayed spectrophotometrically at 278 nm. To analyze the mechanism of drug release from the matrix tablets, data obtained from the dissolution studies were analyzed according to first‑order model, Higuchi model, and Korsmeyer model [9], respectively.

Two optimized batched of controlled release matrix tablets of verapamil HCl based on in vitro dissolution studies were further subjected to in vivo pharmacokinetic studies. Male New Zealand white rabbits weighing 2.0‑2.5 kg were selected for these studies. The in vivo studies were performed after getting approval from institutional animals ethical committee. These studies were performed by using the parallel design. Rabbits were divided into 3 groups, each consisting of 3 animals. The first group received reference standard (verapamil HCl drug solution) and three each were used for selected matrix tablet formulations. Rabbits were selected after checking whether they were used for any other experiments at least 15 days prior to this experimentation. All the rabbits were fasted overnight before actual experimentation. They were allowed access to drinking water alone. Total 18 milligrams of verapamil HCl dissolved in distilled water was administered orally to the first group of rabbits through oral tube. Few ml of distilled water was pushed through a syringe (without needle) to ascertain that all the verapamil reaches the stomach. The two matrix tablet formulations containing 18 mg of verapamil HCl were orally administered to second and the third group of rabbits by using an oral tube. Collected blood samples were heparinized and stored in a freezer before analysis. Plasma samples and deproteinizing solution were mixed in a ratio of 4:1 and were added to a 2 ml polypropylene micro centrifuge tube. After capping, the tube contents were vortex mixed for 30 s, and the suspension was centrifuged at 4000 rpm for 10 min. Plasma was separated using micropipette for further quantitative evaluation. The supernatant liquid was collected and diluted with the mobile phase and analyzed by reverse phase high performance liquid chromatographic method.

Accelerated stability studies on the optimized matrix tablets were carried out as per International Conference on Hormonisation guidelines at 40±2°/75±5% Relative Humidity. Physical attributes of the tablets, % drug content and in vitro drug release profiles were studied over a period of 6 months. Differential scanning calorimetric thermograms were recorded after storing at accelerated storage conditions after 6 months in order to ensure the stability of the formulations.

All batches of matrix tablets were produced under similar conditions to avoid processing variables. The compressed tablets were evaluated for various physical parameters such as weight uniformity, hardness, drug content, friability and thickness. Drug content of the formulations was assayed spectrophotometrically at 278 nm. The assayed content of drug in various formulations varied between 98.00% and 100.25% (average 99%). Tablet weights varied between 300 mg and 304 mg (average 302 mg), hardness between 5.0 kg/cm2 to 6.0 kg/cm2 (average 5.5 kg/cm2), thickness between 4.00 mm and 4.10 mm and friability loss was in the range of 0.32% to 0.47% (average 0.40%). Thus all the physical parameters of the compressed matrix tablets were found to be practically within the official limits. The in vitro drug release studies were conducted for all the matrix tablet formulations. The tablets extended the drug release from 8 h to 20 h. Among the matrix tablets, formulations FVH6 and FVH8 showed linear drug release over the period of 20 h. The drug release from the matrix tablets containing lactose as diluent was rapid when compared to the other diluents such as MCC and DCP. Insoluble, but weakly swellable fillers such as MCC and DCP remained within the gel structure and resulted in the slow release rate of the drugs. Hence, MCC and DCP as insoluble diluents provided the slower rate of drug release. These excipients have minimum swelling property, which had contributed to the swollen matrix for PEO and retarded the penetration of dissolution medium. Reports indicated that MCC has strong tablet binding properties, which decrease the tablet porosity [12]. This nature of MCC is also responsible for the extended drug release from the matrix tablets [13]. The formulations containing starch 1500, which is slightly soluble filler, the drug release from the matrix tablets were extended up to 18 h. This was due to the diluent retarded the easier penetration of dissolution medium into matrix and thus prevented the polymer matrix erosion. The swelling nature of starch 1500 upon exposure to dissolution medium resulted in the formation of a gel layer, which controlled the release rate of verapamil HCl from matrix tablets. The drug release was higher with anhydrous lactose (organic diluent) than MCC and dicalcium phosphate (inorganic diluents). The order of drug release from various matrix tablets along with diluents is lactose>DCP>starch 1500>MCC. The drug release profiles for the prepared formulations were shown in the figs. 1 and 2. This may be due to higher hydrophilicity of the organic diluent than the inorganic counterpart, resulting in faster movement of solvent front i.e. easier penetration of dissolution medium into the tablet matrix, lead to the faster matrix erosion. It was also observed that the matrix delivery system has potential to function in relatively pH–independent manner and it was able to control the release of verapamil HCl in a linear manner over a prolonged period of time. Drug released from the tablets was within 97 to 99% and found to be best explained by first order plots and Korsmeyer et al., model (the critical value of n=0.593-0.890 suggesting non‑Fickian diffusion i.e., the drug release is by diffusion from the hydrated matrix and by polymer relaxation). Various in vitro dissolution parameters were shown in the Table 3. It also indicated that the higher proportion of PEO in the matrix results in the delay of drug release over an extended period of time. The stability studies on selected formulations were carried out for 6 months as per ICH guidelines. Under the specific storage conditions, no significant changes in verapamil HCl profiles from the prepared tablets was observed. The drug release profiles of the selected formulations (FVH4 and FVH 8) before and after stability studies were shown in the fig. 3. No visible and physical changes were observed in the matrix tablets after accelerated storage conditions. DSC thermograms were recorded after storing at accelerated storage conditions in order to ensure the stability of the formulations. The verapamil HCl pure drug exhibited a sharp endothermic peak at 146.62° whereas the formulations FVH 4 and FVH 8 exhibited a broad endothermic peak at 146.22° and 148.66°. Thus, the DSC thermograms revealed that there were no major interactions between the pure drug verapamil HCl and the polymers used. The thermograms of verapamil HCl pure drugs and selected formulations were shown in fig. 4. The results of in vivo evaluation showed that verapamil HCl administered as plain drug alone reached peak plasma concentration of 994.67 ng/ml after 1 h of administration. The matrix tablets prepared reached after 4 h of administration and also the maximum concentration reached is 679 ng/ml and 662 ng/ml for FVH4 and for FVH8, respectively after administration of tablets. The results proved that prolonged release even after 24 h clearly showed that drug was released slowly within a narrow range for prolonged period of time. In vivo pharmacokinetic studies on verapamil HCl matrix tablets showed prolonged release and were be able to sustain the therapeutic effect time up to 22 h (fig. 5). 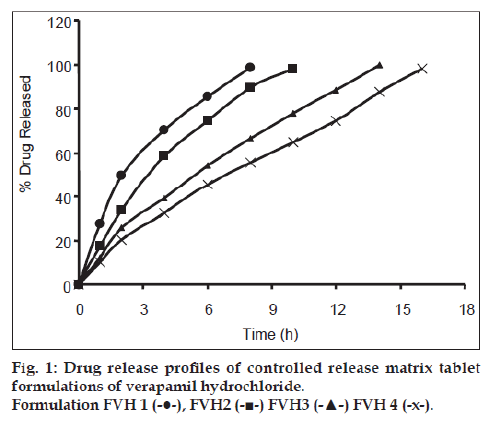 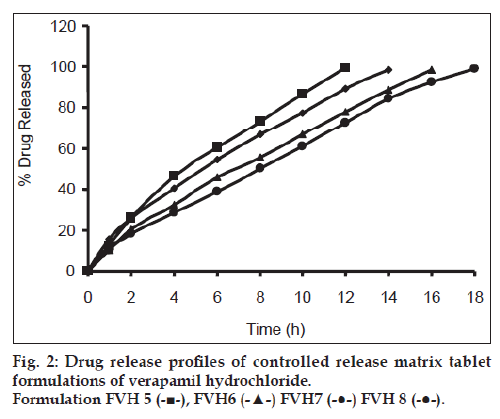 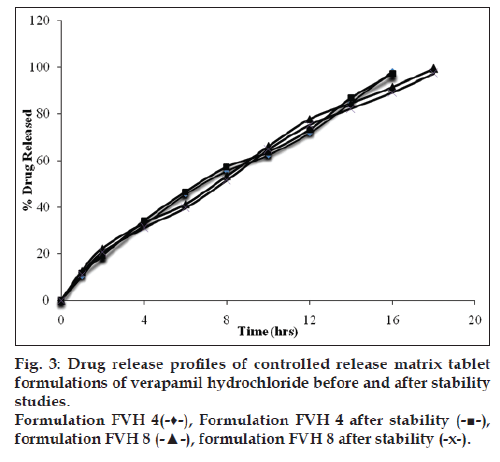 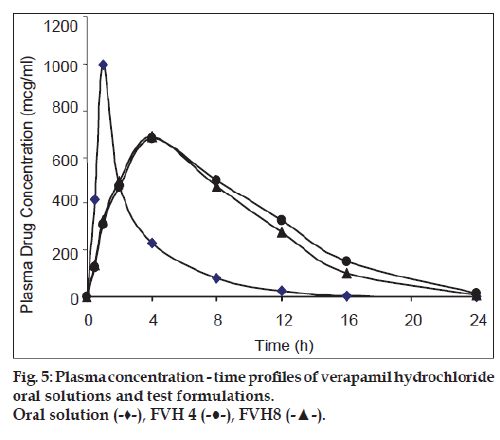 This work has provided a novel simple approach to formulate oral and swellable controlled release matrix tablets of verapamil HCl. The controlled release matrix tablets were successfully formulated using the PEO and different excipients for delivery of drug over an extended period of time. In vivo pharmacokinetic study proves that the verapamil HCl from test tablets show prolonged release and may be able to sustain the therapeutic effect, which can be proved by pharmacodynamic study.

The authors are thankful to Chebrolu hanumaiah Institute of Pharmaceutical Sciences for providing necessary facilities and for constant encouragement.