Migraine attack is a troublesome physiological condition associated with throbbing intense headache in one half of the head. Sumatriptan is rapidly but incompletely absorbed following oral administration and undergoes first-pass metabolism, resulting in a low absolute bioavailability of 14% in humans [1].

Moreover, the transport of SS across the blood-brain barrier (BBB) is very poor. Intranasal administration allows transport of drugs to the brain circumventing BBB, thus providing unique feature and better option to target drugs to the brain [2]. However, one of the problems associated with nasal delivery of Sumatriptan solution is lower retention time of solution in nasal cavity (15 min) resulting in lower bioavailability. Hence, the objective of this study was to develop an intranasal spray formulations for SS using mucoadhesive and thermoreversible polymers like pluronic PF127/ PF68 for prolonged action, direct targeting and controlled release of drug to the brain tissues.

The pseudo-ternary phase diagrams of Labrafil M 1944 CS, Cremophor RH 40, Transcutol and water were constructed using water titration method to determine appropriate concentrations for formation of o/w microemusion (fig. 1). Surfactant was blended with cosurfactant in fixed weight ratios (1:1, 2:1, 3:1). For preparation of phase diagram, the ratio of oil to the Smix was varied from 1:9 - 9:1 (w/w). Water was added dropwise to the oil-Smix mixture under vigorous stirring to form a clear and transparent liquid. Microemulsion formulations were optimized using 23 factorial design. 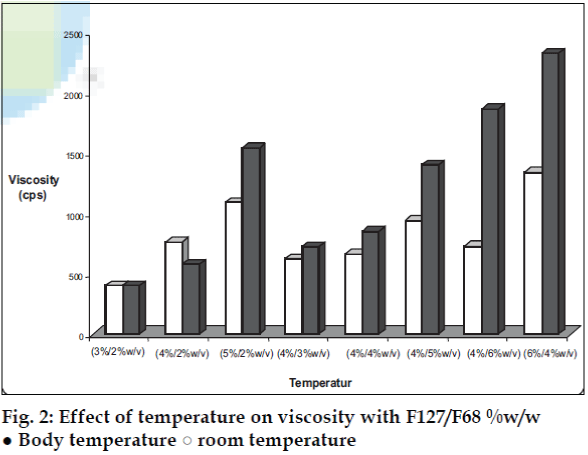 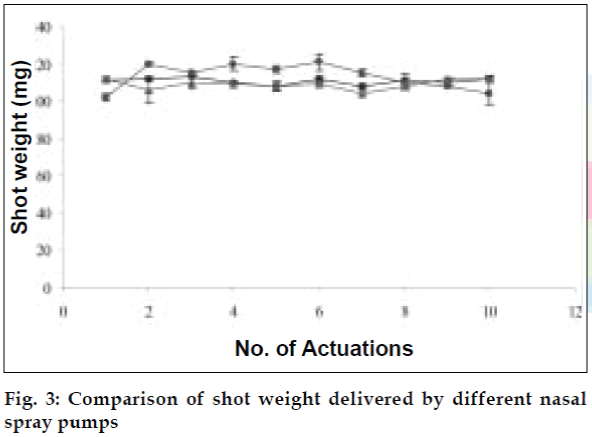 Development and evaluation of nasal spray

The developed formulations were filled in nasal spray pumps. Three nasal actuators viz. VP6/100 µl, VP7D/100 µl and VP7/100 µl were tried out. The delivery rates and performance of the three spray pumps were evaluated and compared using blank formulations for parameters like spray pattern, shot weight per spray and content uniformity per spray (figs. 3 and 4). The spray pumps were characterized for physical parameters like nozzle dimensions, diameter and capacity. Fig. 4: Spray pattern of the formulation delivered through VP6/100

The area of microemulsion existence was obtained using Cremophor RH 40/Transcutol/Labrafil M 1944CS/Water system (fig. 1). Microemulsions with S/Cos (3:1) were further optimized using 23 factorial designs to give a formulation containing Labrafil, Cremophor RH 40/Transcutol and Water in the concentration of 3%, 20% and 40%, respectively. Microemulsions developed were clear, with pH of 6.0 and particle size in the range of 1.5-70 nm with a mean particle size in the range of 18 nm. The microemulsion was found to be stable on centrifugation at 6000 rpm for 10 min. The viscosity of the microemulsion at room temperature was 700 cps which increased to 1770 cps at body temperature. The change in viscosity confirmed the thermoreversible nature of the microemulsions. In vitro diffusion studies of the developed formulations gave a controlled release with PTR2 and C 980 with 84% and 92% release, respectively in 4 h (fig. 5). In vitro release with C980 was found to be linear. Incorporation of carbopols resulted in mucoadhesion formulations and studies using sheep mucosa indicated bioadhesion of formulations on sheep mucosa (fig. 6). The comparative studies of nasal sprays indicated that VP6D gave constant shot weight of 110 mg when compared to VP7D and VP7 were the shot weight varied from 100-110 mg. Spray patterns also revealed that VP6D gave spherical and uniform spray pattern. The content uniformity per spray with VP6D valve was found to be 98-102%. All the intranasal formulations could be sprayed conveniently with uniform spray pattern using the above spray pumps. The in vivo studies are in progress to assess the intranasal deposition pattern of the developed formulations. Stable intranasal formulations of sumatriptan have been developed and evaluated. Thermoreversible microemulsion based intranasal delivery might be a promising approach for the rapid onset and controlled delivery of sumatriptan succinate.