Chronotherapeutics refers to a clinical practice of synchronizing drug delivery in a manner consistent with the body’s circadian rhythm, including disease states, to produce maximum health benefit and minimum harm [1]. The site-specific delivery of drugs to the colon has implications in a number of therapeutic areas, which include topical treatment of colonic disorders such as Crohn’s disease, ulcerative colitis, constipation, colorectal cancer, spastic colon and irritable bowel syndrome. A colonic delivery system would additionally be valuable when a delay in absorption is therapeutically desirable in treatment of diseases like rheumatoid arthritis, which are influenced by circadian rhythms [2]. The disease is known to have the peak symptoms when awaking from nighttime sleep.

Ketoprofen is a potent non-steroidal anti-inflammatory drug with a short biological which is prescribed for longterm longterm treatment of musculoskeletal and joint disorders such as rheumatoid arthritis, osteoarthritis, alkylosing spondilytis and acute gout [3]. The mechanism of action of ketoprofen is mainly associated to the inhibition of the body’s ability to synthesize prostaglandin. Adverse effects on the gastric mucosa have been observed when the drug is administered orally. Ketoprofen is rapidly absorbed from the gastrointestinal tract and reaches high bioavailability (>92%). The drug has been reported to be transported across the intestinal epithelial cells by trans-cellular passive diffusion [4].

Colon-specific delivery can be achieved with a suitable mechanism that triggers off the drug release upon reaching the colon. The physiological change in the pH of the gastrointestinal tract has been extensively exploited to convey the actives to the colon. Methods based on pH-sensitive delivery, such as delayed-onset dosage forms, could be a simple and practical means for colon targeting. Several polymers, particularly Eudragit S-100 [5] and Eudragit™S [6], have been investigated for colonic delivery. These polymers have been designed to be soluble at pH values higher than 7, keeping in mind the pH prevalent in the large intestine. As reported, the pH of the colon in normal subjects drops from 7.5±0.4 in the terminal ileum to 6.4±0.6 in the ascending colon [7]. However, the major disadvantage of these systems is the possibility of the drug being released in the terminal ileum rather than the colon. This problem was thought to be solved by utilizing two polymers: one having pHsensitive, and the other imparting a controlled-release property. Eudragit S was used to prevent the drug release till the formulation reaches the terminal ileum, whereas cellulose acetate avoids the complete release in the ileum and effectively conveys the drug to the colon.

A multiparticulate system presents several advantages in comparison to single unit forms in that they exhibit higher colonic residence time, more predictable gastric emptying, and cause less local irritation [8]. With all these considerations in mind, a multiparticulate system consisting of drug-loaded cellulose acetate cores encapsulated within Eudragit S-100 microcapsules was designed for chronotherapeutic delivery of ketoprofen. As a core forming polymer, cellulose acetate, whose application in the microencapsulation has been extensively investigated, was selected [9]. With this system, the aim was to minimize drug release in the upper part of the gastrointestinal tract and target the drug to the colon.

Cellulose acetate cores containing ketoprofen were prepared by emulsion-solvent evaporation technique in an oily phase [10]. Cellulose acetate was dissolved in acetone to get a homogenous polymer solution (1% w/v). Ketoprofen was dissolved in 10 ml of the polymer solution at drug:polymer ratio of 1:1, 2:1 and 4:1, and the resulting solution was added in thin streams to 70 ml of liquid paraffin containing 1% w/w of span-80. About 10 ml of acetone was added to the external phase to produce a stable o/o emulsion. The system was maintained under constant stirring (1000 rpm) using a variable speed propeller stirrer (RQ 125 D, Remi Udyog Ltd., Mumbai) for a period of 3 h to allow complete solvent evaporation. The cellulose acetate cores formed were separated, washed with n-hexane, and dried for 48 h in a vacuum desiccator.

Cellulose acetate cores containing ketoprofen were encapsulated following the same technique with Eudragit S-100 [10]. The drug-loaded cellulose acetate cores (100 mg) were suspended in 5 ml of ethanolic solution of Eudragit S-100 (10% w/v) and emulsified into 70 ml of liquid paraffin containing 1% w/w of span-80. Emulsification was maintained using a variable-speed propeller stirrer at 1000 rpm to allow complete solvent evaporation. The microcapsules formed were separated, washed with nhexane, and dried for 48 h in a vacuum desiccator.

IR spectra of ketoprofen, cellulose acetate, Eudragit S and the microcapsules were recorded in a FTIR spectrophotometer (Jasco FTIR, 460 plus) to check the chemical integrity of the drug in the microcapsules [11].

Morphology and surface topography of the microparticles were examined by scanning electron microscopy12 (SEMJeol, JSM-840A, Japan). The samples were mounted on the SEM sample stab, using a double-sided sticking tape and coated with gold (200A°) under reduced pressure (0.001 torr) for 5 min to improve the conductivity using an Ion sputtering device (Jeol, JFC-1100 E, Japan). The coated samples were observed under the SEM and photomicrographs of suitable magnifications obtained.

The particle-size distribution of the microparticles was determined using optical microscopy [12]. The projected diameter of a total of 200 microparticles from each batch was observed. The size distribution data got were attempted to fit into normal and log normal distribution, and the equivalent diameter based on surface number basis (dsn) was computed using Hatch-choate equation [13].

An accurately weighed quantity of the microparticles was dissolved in acetone. The acetone was evaporated and the residue left behind was vortexed with 75% methanol for 30 min to extract the drug. The dispersion was filtered and the absorbance of the filtrate was measured at 258 nm after appropriate dilution in a UV-visible spectrophotometer (Jasco V-530, Japan). The drug content was estimated in triplicate using a calibration curve constructed in the same solvent. Polymers did not interfere with the assay at this wavelength.

Samples of the ketoprofen, cellulose acetate, physical mixtures and the cellulose acetate cores were taken in a flat-bottomed aluminium pans and heated over a temperature range of 40-180° at a constant rate of 5°/min with purging of nitrogen (50ml/min) using alumina as a reference standard in a differential scanning calorimeter (Perkin Elmer DSC, Pyris-1).

The diffraction studies were carried out in a powder XRay diffractometer (Philips, PW 1050/37) with a vertical goniometer using Cu K α radiation with Ni filter at a voltage of 40 kV and a current of 20 mA. Powder XRD patterns for ketoprofen, cellulose acetate, physical mixture and cellulose acetate cores were obtained by scanning from 0 to 50° 2θ.

The compositions of different batches of cellulose acetate cores are shown in Table 1. Cellulose acetate cores containing ketoprofen were prepared by emulsion solvent evaporation technique, where the organic solution containing the drug and cellulose acetate in acetone was emulsified into an external oil phase of liquid paraffin. A small amount of acetone added to the external oily phase was known to avoid rapid diffusion of the organic solvent into the oily phase. This would prevent immediate polymer precipitation before the organic solution could be dispersed into droplets in the oily phase leading to formation of a stable emulsion. Span 80 (1% w/w) was used as an emulsifier to stabilize the o/o emulsion produced.

Photomicrographs of the cellulose acetate cores are shown in Fig. 1a. It is vivid from SEM photomicrographs that the cores were discrete, uniform and spherical with a porous and rough surface. The rough surface of the cores can be attributed to the rapid solvent diffusion and quick precipitation of cellulose acetate during the formation of o/o emulsion. It has been reported that microspheres with a porous and rough surface were produced by solvent evaporation technique with crystalline polymers [14]. Fig. 1: SEM Photomicrographs. Photomicroghaphs of Cellulose acetate cores (a) and Eudragit S microcapsules (b) as revealed by scanning electron microscopy.

The percent drug loading and entrapment efficiency of the three batches of drug loaded cores are depicted in Table 1. The values of entrapment efficiency were found to decrease with increase in the initial drug loading, which can be ascribed to better drug entrapment within the cores with increase in cellulose acetate levels. The drug loss during the microencapsulation process can possibly be related to the partitioning of the drug to the oil phase. 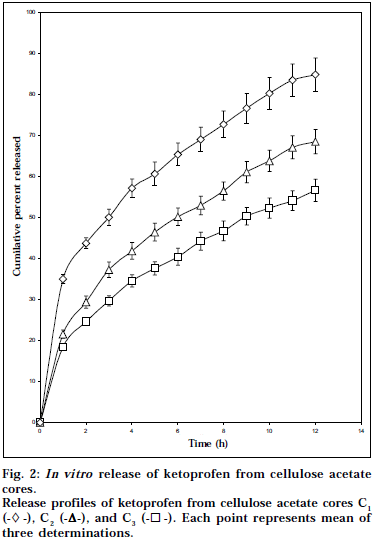 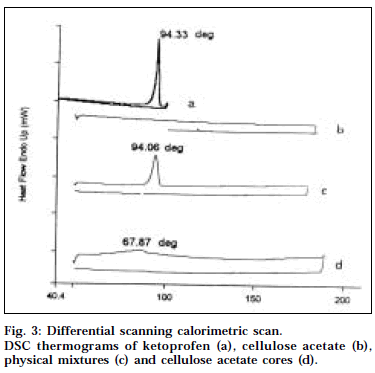 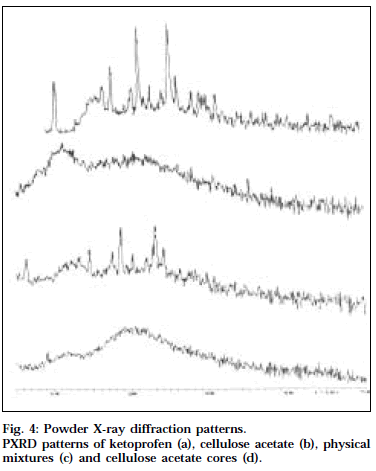 As a part of the research work, a preliminary screening study was undertaken to select a suitable organic solvent that would dissolve Eudragit S-100 and, at the same time, maintain the integrity of the cellulose acetate cores. Ethanol was chosen as solvent as it met the above said criteria; moreover, ethanol diffuses quickly into the external oily phase, resulting in encapsulation of the drugloaded cellulose acetate cores. Table 2 depicts the compositions of different batches of Eudragit microcapsules.

SEM revealed that the Eudragit microcapsules were discrete, uniform and spherical, with a smooth and dense surface. The photomicrographs of the Eudragit microcapsules are portrayed in Fig. 1b. It has been already established that microspheres with a smooth and dense surface were produced by solvent evaporation technique with amorphous polymers [14]. 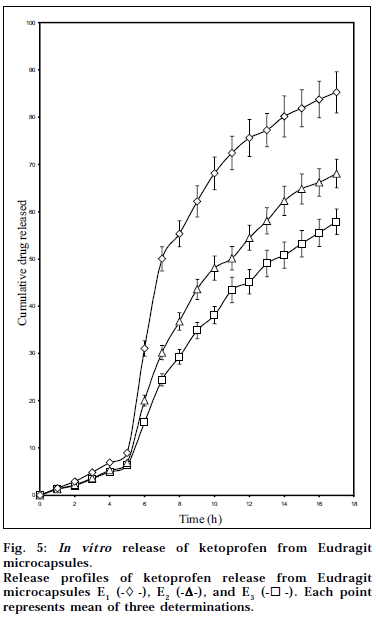 A multiparticulate system having both pH-sensitive and controlled-release property is described for chronotherapeutic delivery of ketoprofen. The results collectively prove that dual coated microcapsules with enteric and controlled release properties can be successfully developed using double microencapsulation procedure. Bedtime administration of such a device could improve the anti-inflammatory therapy in the management of rheumatoid arthritis.

The authors are grateful to Prof. B. G. Shivananda, Principal, Al-Ameen College of Pharmacy, for his constant support during the present research. They are also thankful to Rhone Poulenc (I) Ltd., Mumbai, for providing the gift sample of ketoprofen.