Design and evaluation of liposomal formulation of pilocarpine nitrate

Prolonged release drug delivery system of pilocarpine nitrate was made by optimizing thin layer film hydration method. Egg phosphatidylcholine and cholesterol were used to make multilamellar vesicles. Effects of charges over the vesicles were studied by incorporating dicetylphosphate and stearylamine. Various factors, which may affect the size, shape, encapsulation efficiency and release rate, were studied. Liposomes in the size range 0.2 to 1 Î…m were obtained by optimizing the process. Encapsulation efficiency of neutral, positive and negatively charged liposomes were found to be 32.5, 35.4 and 34.2 percent, respectively. In vitro drug release rate was studied on specially designed model. Biological response in terms of reduction in intraocular pressure was observed on rabbit eyes. Pilocarpine nitrate liposomes were lyophilized and stability studies were conducted.

The importance of liposomes as drug delivery vehicle is now becoming well established. This applies particularly to the ability of liposomes to buffer the toxicity of entrapped drugs while maintaining efficacy [1], some areas in which liposomes display therapeutic promise are as carriers for anticancer agents [2-4], antiparasitic [5], antibacterial [6], antifungal drugs [7], antiviral [8,9] and ocular liposomes [10-12]. These finding makes it increasingly necessary to develop liposomes to satisfy pharmaceutical considerations. The inherent demands include inexpensive material, straightforward and rapid method of generating liposomes, homogeneous and reproducible size distribution and efficient technique for loading liposomes. In addition, the fi nal liposomal formulation must be highly stable, as both the retention of entrapped drug as well as chemical and dimensional stability of the liposome themselves.

The behavior of liposomes in vivo [13] is strongly dependant upon vesicle size, lipid composition and lipid dose. In the absence of cholesterol, liposomes usually leak substantially when introduced intravenously. Most liposomes introduced i.v. is eventually cleared by the phagocytic cells of reticuloendothelial system (RES) that usually result in localization in the liver and spleen [14]. The rate of such clearance, as well as the resulting distribution, can be infl uenced by liposome size. Smaller vesicles are cleared more slowly than their larger counterparts (for the same lipid dose) and are less rapidly sequestered by the liver.

The circulation time is also sensitive to lipid dose; higher doses lead to longer circulation times. These effects are presumably related to saturation of RES at higher dose [15]. Other factors modulating vesicles longevity include the charge of the vesicle; vesicles containing negative charged lipids are cleared more rapidly than neutral or positively charged systems.

Multilamellar vesicles (MLVs) were prepared using thin lipid film hydration method. Various factors such as phosphatidylcholine and cholesterol ratio, lipid and drug ratio, incorporation of charged species and pH etc. were studied which may affect the size, shape and incorporation efficiency of liposomes. Liposomes were evaluated by optical microscope as well as transmission electron microscope. Analysis of drug content was carried on UV spectrophotometer. In vitro release rate studies were conducted on specially designed in vitro model and in vivo studies of liposomes were performed on albino rabbit eyes.

Pilocarpine nitrate (PN) was a gift sample from JT Baker Chemicals Co., (Philipsburg NJ), and analyzed in our laboratory. Phosphatidylcholine, cholesterol, dicetylphosphate and stearylamine were purchased from Sigma chemicals U.S. All other chemicals and reagents used were of analytical grade.

Stock solution containing phosphatidylcholine and cholesterol in 10:4 molar ratios were prepared in chloroform. Appropriate volume of these solution and 10 g glass beads were transferred to a 250 ml round bottom flask and attached to the rotary vacuum evaporator. The fl ask was kept immersed in a thermostat water bath, with the temperature set at 30° and rotated at about 100 rpm. Process was allowed to continue till all the liquid had evaporated from the solution and a dry lipid film had deposited on the wall of the flask. Flask was rotated under vacuum for another 15 min and then fl ushed with nitrogen to remove the last traces of solvent. Aqueous phase (5 ml containing drug) was added to the fl ask and the fl ask was rotated with the same speed as before for 30 min or until all the lipid had been removed from the wall of the flask. The suspension was allowed to stand for an optimized period of 2 h at room temperature in order to complete the hydration.

The inclusion of negatively charged lipid such as dicetylphosphate or positively charged surfactant such as stearyl amine tend to increase the interlamellar repeat distances between successive bilayers in the MLV, swelling the structure with the greatest proportion of the aqueous phase. These effects lead to a greater overall entrapped volume. Hence two batches of liposomes were prepared containing phosphatidylcholine, cholesterol, stearylamine and phosphatidylcholine, cholesterol and dicetylphosphate in the ratio 10:4:1 and percent drug incorporation was calculated. Antioxidant such as 1 mol % α-tocopherol [16] was used to prevent peroxidation [17-19] of lipid during sonication of MLVs.

Vibronics-250W probe type ultrasonicator was used for size reduction of MLV dispersion [20,21]. Sample (5 ml) was placed in a 50 ml beaker and the probe was dipped into it. The process was carried out at low temperature using ice bath. Total ultrasonication period was 3 min including intermittant stoppage of 30 s.

Sample (4 ml) was placed in ultracentrifuge tubes (cooling centrifuge, Remi Instruments, Mumbai) at 20,000 rpm. Ice cold water was added to enhance centrifugation and mixture was centrifuged for 20 min. Solid particles left in the tube was collected and suitable volume of aqueous medium was added. Nitrogen gas was flushed to avoid peroxidation of lipids.

Every sample prepared was examined under optical microscope using oil immersion lens. Samples showing fragments of non-dispersed lipid film or PN precipitates were discarded. Electron microscopic studies were carried out on transmission electron microscope (model 100S, Geol Ltd. Tokyo, Japan). Grids precoated with colophony resins were used. Liposome sample was applied to the grid and kept for settling for 5 min. The grid was then coated with 1.5% phosphotugustate and dried at room temperature. The same was examined under transmission electron microscope and photographs were taken (fig. 1). To aliquots of liposome sample (0.5 ml), 5 ml of 10% sodium laurylsulphate (SLS) was added and the volume was made up to 50 ml. The sample was warmed on water bath at 700 for 30 min; similarly a blank solution in 50 ml was prepared. This procedure was employed for the analysis of PN in various batches. Drug concentration was estimated by measuring the absorbance at 215 nm using spectrophotometer with reference to the blank solution prepared (Table 1).

PC is phosphatidylcholine, C is cholesterol, SA is stearyl amine and DCP is dicetyl phosphate

Drug release was determined with the help of modifi ed USP XXI dissolution rate model. The model comprises of a beaker (250 ml) and a plastic tube of diameter 17.5 mm opened from both the ends. The tube was tied at one end with treated cellophane membrane and dipped into the beaker containing dissolution medium. The beaker was filled with 90 ml phosphate buffer (pH 7.4) and temperature was maintained at 37±1°. Liposomic preparation (10 ml) was added in the tube and a paddle type stirrer was attached in the center of the beaker. The speed was maintained at 100 rpm dissolution sample (5 ml) were withdrawn at 0.5, 1, 2, 4, 6 and 8 h and analyzed spectrophotometrically. Results were tabulated and graph was plotted as percentage drug release versus time for all three formulations (Table 2).

Two batches of liposomes viz. LS-2 and LS-3 were selected for animal studies. Studies were carried out in 4 albino rabbit eyes. Liposomes (50 μl) were instilled in lower cul-de-sac of one eye and the same amount of the normal saline in the other. Intraocular pressure (IOP) was measured periodically and observations were recorded in Tables 3 and 4. The response was recorded as Irt= I0 - It / I0 were I0 is the initial IOP and It= IOP at time t (fig. 2). Marketed solutions (1, 2, and 4 % PN w/v) were also studied in the similar fashion and compared with PN liposomes (Table 5). 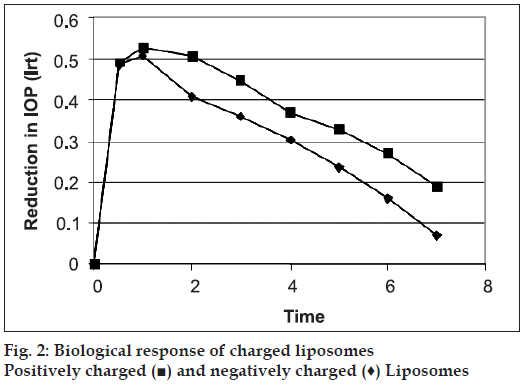 The aim of the use of the drug loaded liposome in ocular formulation is to increase the availability of the encapsulated drug to the eye in terms of both uptake and residence time. To achieve this goal, liposomes with positive and negative surface charges were prepared using negatively and positively charged components and evaluated. Thin lipid fi lm-hydration method was used to prepare liposomes.

Process was optimized for solvent selection, lipid:lipid ratio, lipid:drug ratio, buffer system, pH, charged species added. In selection of solvent system, chloroform alone and mixture of chloroform and methanol (in ratio 2:1 and 1:1) were tried for lipid dissolution and film formation. Inclusion of methanol resulted in precipitation of some part of phospholipid before drying and/ or non-uniform film; hence chloroform alone was used. In the absence of glass beads, the lipid film formed on the wall of the fl ask was thick. It took longer time for hydration and fragments of non-dispersed fi lms were formed. Hence glass beads (10g) were added to increase the surface area available for deposition of the fi lm. Phosphatidylcholine and cholesterol in the molar ratio 10:2, 10:4 and 10:8 were tried to form liposomes. All the three batches were seen under the microscope and drug entrapment was calculated. 10:2 and 10:8 molar ratio showed some fragments of nondispersed lipids. At 10:4 ratio liposomes formed were uniform and entrapment effi ciency was more (Table 1). Hence this ratio was selected for further batches.

Phospholipid:drug molar ratio was selected on the basis that lipid bilayer can intercalate drug to a maximum extent of 10% by molar ratio. On weight basis it becomes 15:1 phospholipids to drug ratio. Thus dispersion containing different molar proportions of drug was prepared (15:0.5, 15:1.0, and 15:2.0). Pilocarpine nitrate added in concentration higher than 15:1 invariably precipitated out in the system. Therefore, in all the studies, concentration of lipid and PN was kept 15:1. Drug was dispersed in buffers of different pH viz. 6.0, 6.6 7.0, 7.4 and 8.0 phosphate buffer. Buffer of pH 6.0 and 6.7 showed poor swelling of lipids with fragments of nondispersed fi lm whereas normal saline containing sodium bicarbonate (pH 7.4) resulted in well shaped liposomes. This swelling process depends on the pH of aqueous medium. This particular lipid composition showed better swelling properties in pH range above 7. Aqueous phase of pH 7.4 was selected for the study at which drug exists in both ionized and unionized form.

Size reduction of MLV system was attempted by ultrasonication. Ice was used to lower the temperature during sonication. For determination of total drug content, the entrapped drug should be made free from liposomes. This was achieved by the addition of alcohol or detergent. Addition of SLS at higher concentration (10%) yielded a clear solution on warming at (60-70°) and did not absorb at 215 nm in UV spectrophotometer.

Optical microscopy was found to be the fast and useful method for preliminary experiment. Transmission electron microscopy enabled the determination of particle size of liposomes formed. The method for the preparation of the grid was standardized. The successes of the preparation of the grid depended on setting of the liposome particle on the coated grid surface. Settling time was kept high and a very small droplet was applied to the grid. Scanning of the grids prepared in such a manner showed a heterogeneous dispersion (0.187, 0.320, 0.487, 0.833, 1.5, 1.16 and 1.0). Photomicrographs of liposomes were taken at 10 000 X (fig. 1).