Mucoadhesive buccal tablets of metoprolol tartarate were fabricated with objective of avoiding first pass metabolism and prolonging duration of action. The mucoadhesive polymers used in formulation were Carbopol-934, hydroxypropylmethylcellulose, hydroxyethylcellulose and sodium carboxymethylcellulose. The formulations were characterized for physiochemical parameters, in vitro release studies and in vivo placebo studies. The best mucoadhesive performance and in vitro drug release profile were exhibited by the tablets containing hydroxyethylcellulose and Carbopol-934 in ratio 1:2. This product was more comfortable to the user due to absence of erosion, faster hydration rate and less viscosity of surrounding environment. In vivo placebo studies did not show any side effects.

In recent years, significant interest has been shown in the development of novel bioadhesive dosage forms for mucosal delivery of drugs that attempt to overcome these limitations [1]. A bioadhesive dosage form necessitates the use of mucoadhesive polymers to adhere to mucosa and withstand salivation, tongue movement and swallowing for significant period of time [2]. High molecular weight polymers are generally used for bioadhesion. Hydrogen bonding due to hydrophilic groups such as -COOH or -OH plays an important role in bioadhesion [3].

Metoprolol tartrate is a cardio selective betablocker. It is used in management of hypertension, angina pectoris, cardiac arrhythmias and myocardial infraction [4]. Metoprolol is rapidly absorbed following an oral dose but undergoes extensive first pass metabolism, resulting in only 38% oral bioavailability [5]. The half-life of metoprolol is approximately 3-4 hours. Hence, the aim was to prepare a mucoadhesive tablet of metoprolol to ensure satisfactory drug release in oral cavity with the use of optimum polymer and thereby to avoid first pass metabolism and prolong duration of action.

Twenty tablets were weighed individually and the average weight was determined. Percentage deviation was calculated and checked for weight variation. Thickness was measured using vernier calipers. Five tablets of each formulation were taken and amount of drug present in each tablet was determined. Each tablet was crushed separately and distilled water (about 70 ml) was added to extract the drug. Volume was made to 100 ml with distilled water, then filtered, diluted and analyzed in spectrophotometer at 274 nm. The surface pH of the tablets was determined in order to investigate the possibility of any irritation in the oral cavity. The tablets were kept in contact with simulated saliva fluid for 2 h and pH was noted by bringing the electrode in contact with surface of formulations [6].

A flow through apparatus, modification of USP Apparatus 4, was designed for carrying out in vitro release studies and determination of bioadhesion/ erosion of buccal tablet3,6. In this model, drug release occurs from only one side of the tablet, which opened towards the reservoir containing simulated saliva fluid as dissolution medium. Simulated salivary fluid was pumped at flow rate of 0.65 ml/min using flow regulators and collected in a reservoir. Samples (5 ml) were drawn at different time intervals (1 h each) from reservoir till tablet eroded completely or dislodged whichever was earlier. Amount of drug released was determined spectrophometrically at 274 nm. Simulated saliva fluid remaining in the flow through cell was filtered immediately and amount of drug present in the filtrate was determined. Total amount of drug released was calculated by adding amount of drug in flow through cell to amount released into the reservoir.

Permission for in vivo studies was obtained from the institutional ethical committee, KSHEMA, Deralakatte and the tests were conducted under the guidance of a physician of KSHEMA, Deralakatte. The study was conducted in 12 healthy volunteers (age group 21 to 28 y). Written consent was obtained from the volunteers before study. The volunteers were not allowed to take water or food starting from half an hour before the study till the end of the study. The volunteers were given different coded tablets along with written instruction sheets. They were instructed to press the tablets against the cheek for about 30 s without moistening the tablet after application. The volunteers were asked to record the time of tablet insertion time of adhesion and the time and events that occur after the adhesion. At the end the volunteers were also asked to report for irritancy, discomfort, taste, dry mouth, salivation and heaviness in buccal cavity.

Surface pH of all the formulation was found to be between 6.14 and 5.9. These results reveal that all the formulations provide an acceptable pH in the range of salivary pH (5.5 to 7.0). They did not produce any local irritation to the mucosal surface.

Table 2 shows the bioadhesive performance, % hydration and % matrix erosion of different formulations. The strength of tablet was dependent on the property of bioadhesive polymers, which on hydration, adhere to mucosal surface and also on the concentration of polymer used.

All the tablets hydrated gradually reaching a plateau after 8 h and remained almost constant till the end of experiment. Most of the tablets reached 60% hydration within the 1 hour except group I (HPMC group) that hydrated after 2 h. Faster hydration rate was obtained from group II (HEC group) and group III (NaCMC group) that hydrated above 65% within 1 h. These findings can be correlated with the hydrophillicity of cellulose derivatives, which usually varies according to the degree of substitution and to some extent with the polymer viscosity grade. These results inferred that the variation in Carbopol 934: Polymer ratio did not influence the rate of hydration remarkably.

The mucoadhesive polymers used are hygroscopic and retain large amounts of water. Tablets containing HEC as secondary polymer (group II) were found to exhibit least matrix erosion upto 24 h. Water used in swelling studies, hydrates the tablets and prevents the weight loss due to erosion, and the % hydration was more for this group. Due to this reason matrix erosion was not significant in HPMC and HEC groups. The tablets from NaCMC group showed faster hydration rate but they also showed maximum weight loss (erosion). These tablets showed matrix erosion values between 24.5 to 31.8% in 8 h. This is because NaCMC dissolves in water giving stable colloidal dispersion and thereby gets eroded to a greater extent. Matrix erosion started to increase after 4 h due to hydration and dissolution of NaCMC.

In vivo placebo tablet evaluation revealed that, NaCMC group tablets showed the lowest residence time (less than 3 h) in buccal mucosa, due to their faster erosion and loss of fragments. Tablets from HPMC group and HEC group showed low swelling and erosion and they remained bioadhesive for more than 8 h. Even though the bioadhesive strength of tablets containing NaCMC was found to be more than the other groups, they showed erosion in 3 h due to hydration and fragmentation of tablet. Therefore, duration of adhesion and bioadhesive strength exhibited by the HPMC and HEC tablets can be considered satisfactory for maintaining them in the oral cavity for more than 8 h.

None of the placebo tablets from HPMC group and HEC group caused irritation, pain or discomfort on the gum and these tablets offered good acceptability by the volunteers. No side effects like taste alteration, heaviness or severe salivation were observed with these tablets. However discomfort was observed for tablets from NaCMC group due to loss of fragments and also due to formation of rough and nonhomogeneous surface. 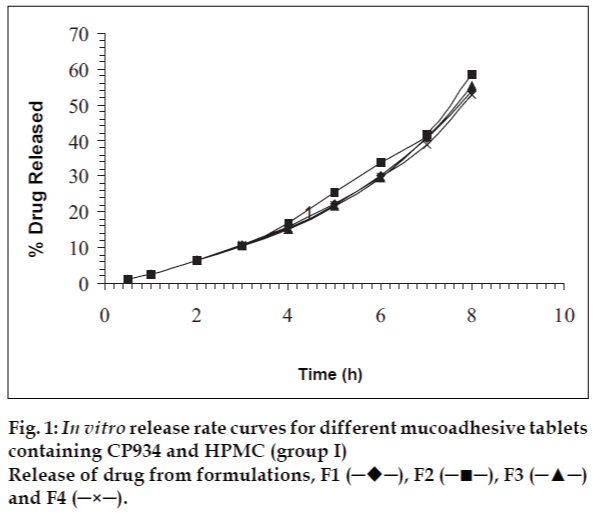 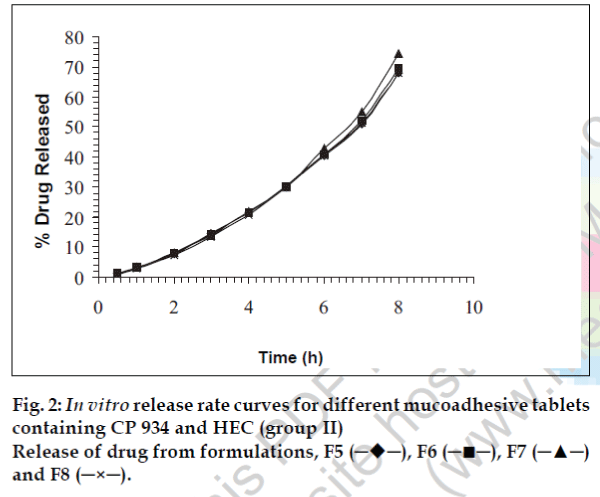 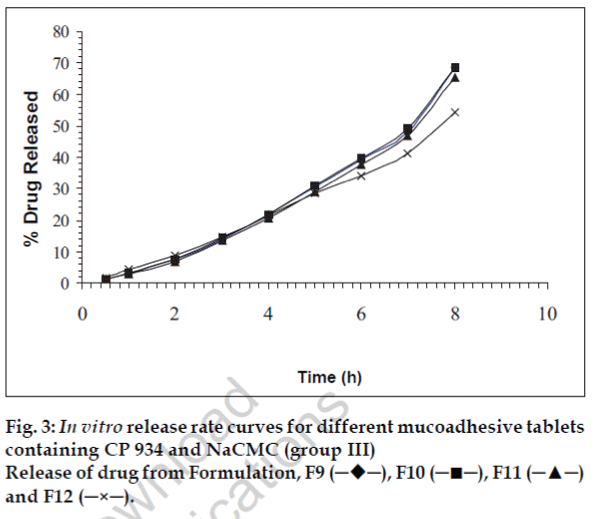 In conclusion, the aim of the present study was to develop bioadhesive drug delivery system for metoprolol tartrate with a prolonged effect and to avoid first pass metabolism. These mucoadhesive formulations of metoprolol, in form of mucoadhesive tablets were developed to a satisfactory level in terms of drug release, bioadhesive performance, physicochemical properties and surface pH. Drug release could be obtained upto 8 h with a polymer combination of CP 934 and HEC in ratio of 1:2.