In the present investigation, an attempt has been made to increase therapeutic efficacy, reduce frequency of administration, and improve patient compliance, by developing sustained release matrix tablets of diclofenac sodium. Sustained release matrix tablets of diclofenac sodium, were developed by using different drug: polymer ratios, such as F1 (1:0.12), F2 (1:0.16), F3 (1:0.20), F4 (1:0.24) and F5 (1:0.28). Xanthan gum was used as matrix former, and microcrystalline cellulose as diluent. All the lubricated formulations were compressed using 8 mm flat faced punches. Compressed tablets were evaluated for uniformity of weight, content of active ingredient, friability, hardness, thickness, in vitro dissolution using basket method, and swelling index. All the formulations showed compliance with pharmacopoeial standards. Among different formulations, F1 showed sustained release of drug for 12 hours with 89.67% release. The effect of other parameters like addition of release modifier (PEG 6000), gum concentration, pH of dissolution medium, rotation speed and dissolution by paddle method, were also studied. Selected formulation (F1) was subjected to stability studies for three months at 0-4°, room temperature (28°), and 45° with RH 75±5%, and showed stability with respect to release pattern. The kinetic treatment showed that the release of drug follows zero order kinetic (R 2 = 0.9758). Korsmeyer and Peppas equation gave value of n = 0.9409 which was close to one, indicating that the drug was released by zero order kinetic. Thus, Xanthan gum can be used as an effective matrix former, to extend the release of diclofenac sodium.

Increased complications and expense involved in marketing of new drug entities, has focused greater attention on development of sustained release (SR), or controlled release (CR) drug delivery systems [1]. Matrix system is the most innumerable method used in the development of CR formulations. It is the release system which prolongs and control release of drug, that is dissolved or dispersed. In fact, a matrix is defined as a well-mixed composite of one or more drugs with a gelling agent i.e. hydrophilic polymers [2].

Xanthan gum is a high molecular weight extracellular polysaccharide, produced on commercial scale by the viscous fermentation of gram negative bacterium Xanthomonas campesteris. The molecule consists of a backbone identical to that of cellulose, with side chains attached to alternate glucose residues. It is a hydrophilic polymer, which until recently had been limited for use in thickening, suspending and emulsifying water based systems [3]. It appears to be gaining appreciation for fabrication of matrices, as it not only retards drug release, but also provides time- independent release kinetics with added advantages of biocompatibility and inertness. Release of soluble drugs was mainly through diffusion, whereas sparingly soluble or insoluble drugs were released via erosion. It is also recommended for use in both acidic and alkaline systems. Xanthan gum has been evaluated as a hydrophilic matrix for CR preparation, using different model drugs including theophylline [4],cephalexin [5], prednisolone [6], and indomethacin [7].

In this study, the use of Xanthan gum as a hydrophilic matrix polymer for controlling release of sparingly water soluble diclofenac sodium was studied, together with different factors affecting drug release, from the hydrophilic matrix tablets.

Diclofenac sodium (DS) was obtained as gift sample from Emcure Pharmaceuticals Ltd., Pune. The pharmacopoeial grade of Xanthan gum (XG), (USP/NF, viscosity of 1% aqueous solution is 1350 cps at 25°, particle size less than 14.28 μm) was obtained from Loba Chemicals, Mumbai. Other materials used were of analytical grade, and procured from commercial sources.

SR matrix tablets of diclofenac sodium were prepared by using different drug:polymer ratios viz. 1:0.12, 1:0.16, 1:20, 1:0.24, 1:0.28 (Table 1). XG was used as matrix-forming material, while microcrystalline cellulose was used as diluent. Magnesium stearate was incorporated as lubricant. All ingredients were passed through a # 100 sieve, weighed, and blended. The lubricated formulations were compressed by a direct compression technique, using 8 mm flat faced punches.

All prepared matrix tablets were evaluated for uniformity of weight and drug content, as per I.P. method. Friability was determined using Roche friabilator. Hardness was measured by using Pfizer hardness tester. Thickness was measured by Vernier caliper.

In vitro drug release was studied using USP I apparatus, with 900 ml of dissolution medium maintained at 37±1° for 12 h, at 50 rpm. 0.1 N HCl (pH 1.2) was used as a dissolution medium for the first 2 h, followed by pH 6.8 phosphate buffer for further 10 h. 5ml of sample was withdrawn after every hour, and was replaced by an equal volume of fresh dissolution medium of same pH. Collected samples were analyzed spectrophotometrically at 276 nm, and cumulative percent drug release was calculated. The study was performed in triplicate.

In order to investigate the mode of release from tablets, the release data of F1 was analyzed with the following mathematical models: Q = Kot (Zero order kinetic), ln (100–Q) = lnQo–K1t (First order kinetic) and Q = Kptn (Korsmeyer and Peppas equation), where, Q is the percent of drug released at time t and Ko and K1 are the coefficients of the equations. Kp is constant incorporating structural and geometric characteristics of the release device, and n is the release exponent indicative of mechanism of release.

Effect of different formulation and dissolution variables on drug release

Formulation F1 was modified by incorporating 12 mg of PEG 6000, to develop new formula F6 (Table 1), to observe the effect of release modifier on drug release. Firstly, a physical mixture of drug and PEG 6000 was heated to temperature 70°, till it was converted into a fluid state. It was allowed to cool, and was then dried at room temperature. This mixture was then blended with XG, diluted with MCC, and finally the lubricated formulation was compressed directly with 8 mm flat faced punch, and evaluated16. Effect of other parameters like gum concentration, pH, rotation speed and dissolution by paddle method, were also studied.

The extent of swelling was measured in terms of % weight gain by the tablet. The swelling behavior of formulation F1, F3 and F5 was studied. One tablet from each formulation was kept in a petridish containing pH 6.8 phosphate buffer. At the end of 1 h, the tablet was withdrawn, soaked with tissue paper, and weighed. Then for every 2 h, weights of the tablet were noted, and the process was continued till the end of 12 h. % weight gain by the tablet was calculated by formula; S.I = {(Mt-Mo) / Mo} X 100, where, S.I = swelling index, Mt = weight of tablet at time‘t’ and Mo = weight of tablet at time t = 0.

Stability study was carried out to observe the effect of temperature and relative humidity on optimized formulation (F1), by keeping at 0-4° (in refrigerator), room temperature (28°), and at 45°, in airtight high density polyethylene bottles for three months, at RH 75±5%. Physical evaluation and in vitro drug release was carried out after every 1 month.

The formulated matrix tablets met the pharmacopoeial requirement of uniformity of weight. All the tablets conformed to the requirement of assay, as per I.P. Hardness, % friability, and thickness were well within acceptable limits (Table 2). 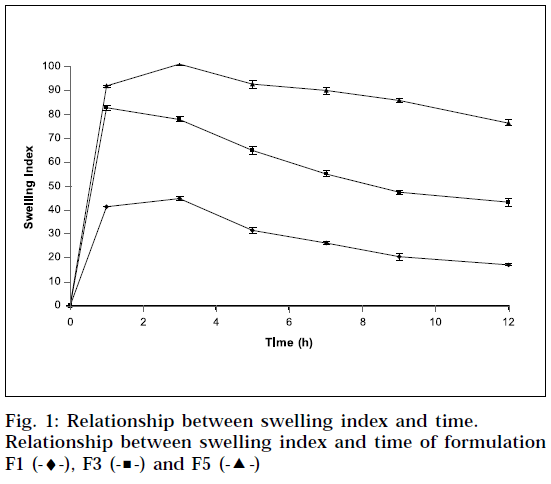 The inverse relationship was noted between amount of gum and release rate of diclofenac sodium. Increasing the amount of gum in the formulation from 0.12 %w/w to 0.28 %w/w, resulted in slower rate, and decreased amount of drug release from the tablet (Fig. 2). This slow release is because of the formation of a thick gel structure that delays drug release from tablet matrix, where hydration of individual xanthan gum particles results in extensive swelling. As a result of rheology of hydrated product, the swollen particles coalesce. This results in a continuous viscoelastic matrix that fills the interstices, maintaining the integrity of the tablet, and retarding further penetration of the dissolution medium. 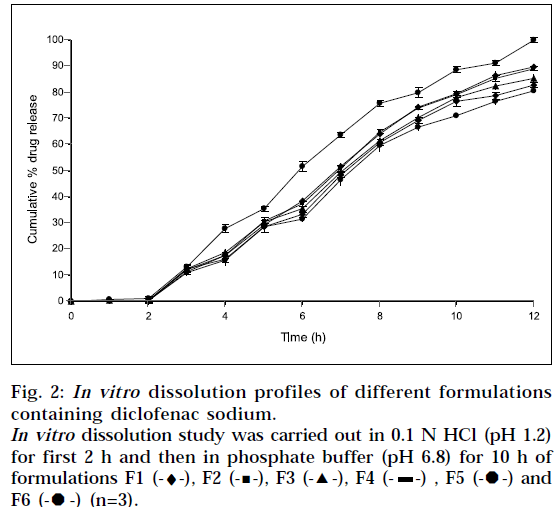 The kinetic treatment reflected that release data of F1 showed R2 value of 0.9173 and 0.9758 for first order, and zero order equation respectively, indicating that release of drug follows zero order kinetic Further Korsmeyer and Peppas equation resulted into the value of n = 0.9409, which is close to 1, indicating that the drug release was approaching zero order kinetic. When n is approximate to 0.5, a Fickian/diffusion controlled release is implied, where 0.5<n<1.0 non-Fickian transport and n=1 for zero order (case II transport). When the value of n approaches 1.0 phenomelogically, one may conclude that the release is approaching zero order.

The incorporation of drugs into a water soluble carrier has frequently been reported, to improve drug dissolution rate and bioavailability. PEG 6000 (6% of weight of tablet) was incorporated in formulation F6, and 100% release was observed in 12 h (Fig. 2). Thus, there was significant increase in drug release, with the use of PEG 6000. The attribute for these findings, is the higher water solubility of PEG 6000.

A positive influence of speed of rotation during in vitro drug release study was noted (Fig. 3). As stirring speed was increased, the thickness of hydrated gelatinous layer surrounding the intact tablet core was noticeably decreased, resulting in more rapid release of drug from matrix tablet. The fact was also reported by Talukdar et al. [19] 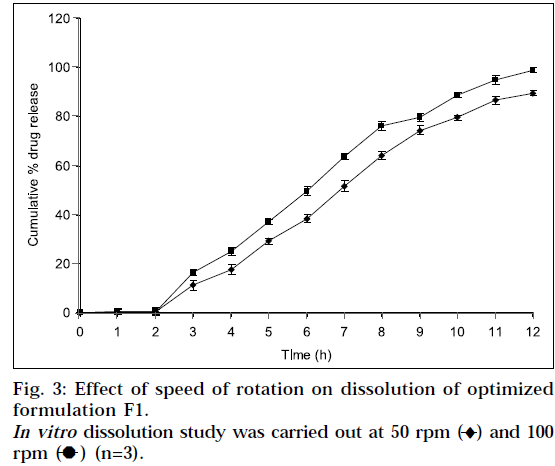 Figure 3: In Effect of speed of rotation on dissolution of optimized formulation F1. In vitro dissolution study was carried out at 50 rpm (♦) and 100 rpm (

Dissolution was also carried out by paddle method, keeping rotation speed at 50 rpm (Fig. 4). Physically, it was observed that tablets in buffer solution settle down at bottom of flask. It swelled considerably to release drug from matrix. There was no significant difference observed between basket method and paddle method at same experimental conditions (P>0.05), when data was analyzed using student ‘t’ test. 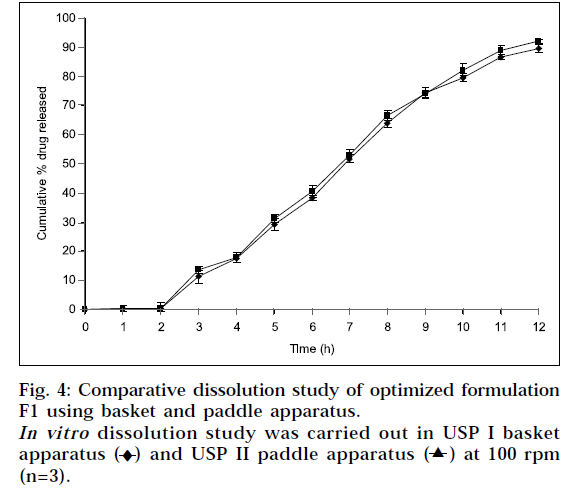 Stability studies revealed that there was no significant change in hardness, friability, drug content, and dissolution profiles of F1. Thus, formulation was stable at different conditions of temperature. In light of the aforementioned discussion, it could be concluded that xanthan gum can be used as an effective matrix former, to retard the release of diclofenac sodium for extended period of time.

The authors are grateful to Emcure Pharmaceuticals Ltd., Pune for providing gift sample of diclofenac sodium.