In the present work, fast disintegrating tablets of prochlorperazine maleate were designed with a view to enhance patient compliance by effervescent method. In this method, mixtures of sodium bicarbonate and anhydrous citric acid in different ratios along with crospovidone (2-10% w/w), croscarmellose sodium (2-10% w/w) were used as superdisintegrants. Estimation of prochlorperazine maleate in the prepared tablet formulations was carried out by extracting the drug with methanol and measuring the absorbance at 254.5 nm. The prepared formulations were further evaluated for hardness, friability, drug content uniformity and in vitro dispersion time. Based on in vitro dispersion time (approximately 13-21 s), two promising formulations (one from each super-disintegrant) were tested for in vitro drug release pattern in pH 6.8 phosphate buffer, short-term stability (at 40ÎŠ/75% relative humidity for 3 mo) and drug-excipient interaction (IR spectroscopy). Among the two promising formulations, the formulation containing 10% w/w of crospovidone and mixture of 20% w/w sodium bicarbonate and 15% w/w of citric acid emerged as the overall best formulation (t 50% 6 min) based on drug release characteristics in pH 6.8 phosphate buffer compared to commercial conventional tablet formulation (t 50% 17.4 min). Short-term stability studies on the promising formulations indicated that there are no significant changes in drug content and in vitro dispersion time (p<0.05).

Many patients find it difficult to swallow tablets and hard gelatin capsules and thus do not comply with prescription, which results in high incidence of non-compliance and ineffective therapy. It is estimated that 70% of the population is affected by this problem [1]. Recent advances in novel drug delivery systems (NDDS) aimed to enhance safety and efficacy of drug molecule by formulating a convenient dosage form for administration and to achieve better patient compliance. One such approach is fast dissolving tablets (FDT) [1-4]. Prochlorperazine maleate (PCZM) is a phenothiazine antipsychotic and widely used in prevention and treatment of nausea, vomiting including that associated with migraine or drug-induced emesis [5]. The concept of formulating fast dissolving tablets containing prochlorperazine maleate offers a suitable and practical approach in serving desired objective of faster disintegration and dissolution characteristics with increased bioavailability. Upon ingestion, the saliva serves to rapidly disperse/dissolve the dosage form. The saliva containing the dissolved/dispersed medicament is then swallowed and the drug is absorbed in the normal way. Some drugs are absorbed from mouth, pharynx and esophagus as the saliva passes down into the stomach [6]. In such cases, bioavailability is significantly greater than those observed from conventional dosage form.

For the preparation of fast disintegrating tablets by effervescent method [7], all the ingredients (except SSF and purified talc) were accurately weighed and sifted through # 44 mesh separately. Sodium bicarbonate and anhydrous citric acid were pre-heated at a temperature of 80º to remove absorbed/ residual moisture and were thoroughly mixed in a mortar to get a uniform powder and then added to other ingredients. The ingredients after sifting through sieve No. 44 were thoroughly mixed in a tumbling cylindrical blender (fabricated in our laboratory). The blend thus obtained was directly compressed into tablets of 150 mg weight (at ambient temperature and humidity conditions) on a 10-station rotary machine (Clit, Ahmedabad, India) using 8 mm round flat punches. The tablets were prepared according to the formulae shown in Table 1.

*A batch of 60 tablets was prepared for each formulation

Twenty tablets were selected at random and weighed individually. The individual weights were compared with the average weight for determination of weight variation [8]. Hardness and friability of the tablets were determined by using Monsanto hardness tester and Roche friabilator, respectively. For content uniformity test, ten tablets were weighed and powdered. The powder equivalent to 5 mg of PCZM was extracted into methanol and liquid was filtered (Whatmann No. 1 filter paper). The PCZM content in the filtrate was determined by measuring the absorbance at 254.5 nm after appropriate dilution with methanol. The drug content was determined using the standard calibration curve. The mean percent drug content was calculated as an average of three determinations [9]. For determination of in vitro dispersion time, one tablet was placed in a beaker containing 10 ml of pH 6.8 phosphate buffer at 37±0.5º and the time required for complete dispersion was determined [10]. IR spectra of PCZM and its formulations were obtained by KBr pellet method using Perkin-Elmer FTIR series (Model 1615) spectrophotometer in order to rule out drug-carrier interactions.

In vitro dissolution of PCZM fast disintegrating tablets was studied in USP XXIII type-II dissolution apparatus (Electrolab, Model-TDT 06N) employing a paddle stirrer at 50 rpm using 900 ml of pH 6.8 phosphate buffer at 37±0.5º as dissolution medium [11]. One tablet was used in each test. Aliquots of dissolution medium (5 ml) were withdrawn at specified intervals of time and analyzed for drug content by measuring the absorbance at 255.5 nm. The volume withdrawn at each time interval was replaced with fresh quantity of dissolution medium. Cumulative percent of PCZM released was calculated and plotted against time. The studies were performed in triplicate.

Short-term stability studies on the promising formulations (ECP4 and ECCS4) were carried out by storing the tablets in an amber coloured glass vial with rubber stopper at 40º/75% RH over a 3 mo period. At an interval of 1 mo, the tablets were visually examined for any physical changes, changes in drug content and in vitro dispersion time. The data was subjected to statistical analysis by using student’s ‘t’ test to find out any significant changes in the above parameters (p<0.05).

Fast disintegrating tablets of PCZM were prepared by effervescent method employing CP and CCS as super-disintegrants along with mixtures of sodium bicarbonate and anhydrous citric acid in different ratios with MCC. Directly compressible mannitol (Pearlitol SD 200) was used as a diluent to enhance mouth feel. A total of eight formulations and a control formulation EC0 (without super-disintegrant) were designed. As the blends were free flowing (angle of repose <30º, and Carr’s index <15%) tablets obtained were of uniform weight (due to uniform die fill), with acceptable variation as per IP specifications i.e., below 7.5%. Drug content was found to be in the range of 95 to 102%, which is within acceptable limits. Hardness of the tablets was found to be 2.6 to 3.0 kg/cm2. Friability values below 1% were an indication of good mechanical resistance of the tablets. Among all the designed formulations, two formulations, viz., ECP4 and ECCS4 were found to be promising and displayed an in vitro dispersion time ranging from 13 to 21 s, which facilitates their faster dispersion in the mouth.

*Average of three determinations. Formulations ECP4 and ECCS4 were selected as the best formulations and used for further studies.

In vitro dissolution studies on the promising formulations (ECP4 and ECCS4), the control (EC0) and CCF (Stemitil 5 mg, Nicolas Piramal Health Care, Baddi, HP, India) were carried out in pH 6.8 phosphate buffer, and the various dissolution parameter values viz., percent drug dissolved in 5, 10 and 15 min (D5, D10 and D15), dissolution efficiency at 10 min (DE10min) [12], t50%, t70% and t90% are shown in Table 3 and the dissolution profiles depicted in fig. 1. This data reveals that overall, the formulation ECP4 containing 10% w/w of CP along with effervescent mixture has shown nearly three-fold faster drug release (t50% 6 min) when compared to the CCF of prochlorperazine maleate (t50% 17.4 min) and released five-times more drug than the control formulation in 10 min. 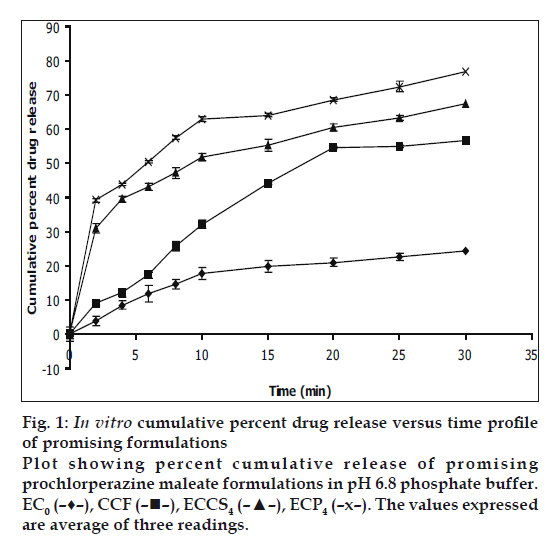 The values expressed are average of three readings.

IR spectroscopic studies indicated that the drug is compatible with all the excipients. The IR spectrum of pure drug shows the characteristic absorption bands around 3299 cm–1 for hydroxyl group of acid, 1735 and 1663 cm–1 for carbonyl group of acid, while the aromatic and aliphatic CH stretching were observed around 2970, 2953, 2938 and 2917 respectively. The IR spectrum of ECP4 showed all the characteristic peaks of PCZM pure drug, thus confirming that no interaction of drug occurred with the components of the formulation. Short-term stability studies of the above formulations indicated that there are no significant changes in drug content and in vitro dispersion time at the end of 3 mo period (p<0.05).

Further in vivo studies in healthy human volunteers are being planned in order to ascertain the enhanced bioavailability of the drug PCZM from the designed promising fast disintegrating tablet formulation (ECP4).