A series of novel N-(furan-2-yl)-1-(5-substituted) phenyl-1,3,4-oxadiazol-2-yl) methanimines (Fa-e) were synthesized and evaluated for antitubercular activity against Mycobacterium tuberculosis (H 37 Rv) strain by using alamar blue assay. The synthesized compounds were characterized based on IR, 1 HMR and mass spectral analysis. The toxicity profile was predicted by organic chemistry portal, a web based application for predicting in silico absorption, distribution, metabolism, excretion and toxicity, and the novel derivatives under study did not show any toxicity issues. The mechanism of action of the titled derivatives was predicted by docking on the Mycobacterium tuberculosis Enoyl-ACP reductase enzyme. The docking study concluded that Fb and Fa possessed good binding energy indicating more prominent interaction towards the active sites NAD and TYR 158. The antitubercular studies showed that the both Fa and Fb possessed significant activity with the MIC as low as 3.125 μg/ml.

Tuberculosis (TB) is a lung infection caused primarily due to Mycobacterium tuberculosis, an intracellular pathogen, with an unusual cell wall [1]. The resistance and noncompliance offered due to long duration of therapy and the reoccurrence of TB as multidrug resistant tuberculosis (MDR‑TB) and extensively drug resistant tuberculosis (XDR‑TB) has made the disease more dreaded. Hence, the importance of identification and characterization of new drug targets cannot be over emphasized [2]. Despite the world wide need to combat this situation no new drug has been developed for the past decades.

Recent focus in the tubercular drug research is on the development of agents inhibiting the enzyme targets involved in potential role in the life cycle of the pathogen [3]. Inh A, the enoyl acyl carrier protein reductase from Mycobacterium tuberculosis is one of the key enzymes involved in the mycobacterial fatty acid elongation cycle and has been considered as a promising target in antitubercular screening [4]. Inhibition of Inh A disrupts the biosynthesis of the mycolic acids that are central constituents of the mycobacterial cellwall [5]. Recent publications from our laboratory on novel enoyl‑ACP reductase inhibitors reported 1,3,4‑thiadiazole and 1,3,4‑oxadiazole as excellent scaffolds [6,7]. The 1,3,4‑oxadiazole core has been explored for the development of new antitubercular agents in recent years [8‑11]. Besides, it is well reported in literature that furan scaffolds exhibited good antitubercular properties [12‑14]. Keeping in view about the need for development of novel antitubercular agents and the knowledge about the role of 1,3,4‑oxadiazoles as enoyl‑ACP reductase inhibitors, an attempt was made here to develop oxadiazole incorporated with furan as possible enoyl‑ACP reductase inhibitors. In this paper we report the synthesis of 1,3,4‑oxadiazole moiety linked with furan through an azomethine linker and probe the effect of this incorporation.

For the synthesis of 2‑amino‑5‑(4‑substituted phenyl)‑1,3,4‑oxadiazoles, semicarbazones were synthesized by the addition of an aqueous solution of semicarbazide hydrochloride (1.11 g, 0.01 mol) and sodium acetate (8.203 g, 0.1 mol), benzaldehyde (2.12 g, 0.02 mol) in 15 ml ethanol by stirring. After shaking for few minutes the mixture was left undisturbed and the precipitate obtained was collected and purified by recrystallization from ethanol. The prepared semicarbazone (0.82 g, 0.005 mol) and anhydrous sodium acetate (6.0 g, 0.073 mol) were made into slurry by adding 17.5 ml of acetic acid. To the slurry, bromine (0.8 ml, 2.51 g, 0.016 mol) in acetic acid (5 ml) was added drop wise by stirring. After addition, the stirring was continued for another 2 h after which the slurry was poured to cold water by occasional stirring. The solid obtained was filtered, washed with water, dried, and purified by recrystallization using absolute ethanol. The rest of the compounds were synthesized by using different substituted aromatic aldehyde [15].

For the synthesis of (furan‑2‑yl)‑1‑(5‑substituted) phenyl‑1,3,4‑oxadiazol‑2‑yl) methanimines, 5‑phenyl‑1,3,4‑oxadiazole‑2‑amine (0.01M) was suspended in DMF and furan‑2‑aldehyde (0.015 M) were added with 2‑3 drops of concentrated H2SO4. The reaction mixture was then refluxed for 6‑7 h. The resultant contents were poured into crushed ice. The crude product was filtered, washed with water until it is free from acidic catalyst, dried and recrystallized with methanol.

Toxicity prediction tool is an effective method in the drug discovery process because many of the newly synthesized potential candidates had failed in clinical trial evaluation due to the pharmacokinetics and toxicity issues. Many computational predictions are nowadays available to overcome such scenario in the drug discovery process. Toxicity prediction of the newly designed scaffold was retrieved from a web‑based application for organic chemistry portal (http:// www.organic‑chemistry.org/prog) [16,17].

In order to probe the structural interactions of the oxadiazolo furans with the enzyme, InhA, molecular docking simulation was done by utilizing Argus Lab 4.1.0. The crystal structure of Enoyl Acyl Carrier Protein Reductase (InhA) from Mycobacterium tuberculosis (PDB entry: 2H7M) was retrieved from the Protein Data Bank (http://www.rcsb.org) [18]. The active sites of the enzyme were identified by using Q‑Site Finder: an energy‑based method for the prediction of protein‑lig and binding sites [19]. The remaining docking protocol was described from our previous studies [20]. The final docked conformations were ranked according to their binding free energy. The pharmacophore modelling of the docked pose were generated by LigandScout 3.1 version [21,22].

The antitubercular activity of synthesized compounds (Fa‑e) were assessed against Mycobacterium tuberculosis using Microplate Alamar Blue assay (MABA). This methodology is non‑toxic, uses a thermally stable reagent and shows good correlation with proportional and BACTEC radiometric method. Briefly, 200 μl of sterile deionized water was added to all outer perimeter wells of sterile 96 wells plate to minimize evaporation of medium in the test wells during incubation. The 96 wells plate received 100 μl of the Middlebrook 7H9 broth and serial dilution of compounds were made directly on plate. The final drug concentrations tested were 100 to 0.2 μg/ml. Plates were covered and sealed with parafilm and incubated at 37º for five days. After this time, 25 μl of freshly prepared 1:1 mixture of Alamar Blue reagent and 10% Tween 80 was added to the plate and incubated for 24 h. A blue colour in the well was interpreted as no bacterial growth, and pink colour was scored as growth. The MIC was defined as lowest drug concentration which prevented the colour change from blue to pink [23].

The design of newly synthesized N‑(furan‑2‑yl) ‑1‑(5‑substituted) phenyl‑1,3,4‑oxadiazol‑2‑yl) methanimines as enoyl ACP‑reductase inhibitor was based up on the similarity based structural features of known pyrrolidine carboxamides (fig. 1). The synthesis of the titled compounds of series (Fa‑e) was accomplished in three steps and the synthetic strategy is outlined in (fig. 2). Aromatic aldehydes on reaction with semicarbazide in presence of sodium acetate afforded corresponding hydrazone. In presence of an oxidizing medium (bromine/acetic acid), these hydrazones underwent oxidative cyclization forming respective 5‑phenyl‑1,3,4‑oxadiazole derivatives. The synthesized oxadiazoles, on reaction with furfural in presence of concentrated H2SO4 in DMF gave the titled molecules. It has been noted that electron withdrawing group present in the phenyl system of the title scaffold gave more percentage yield than that of unsubstituted and electron donating group. 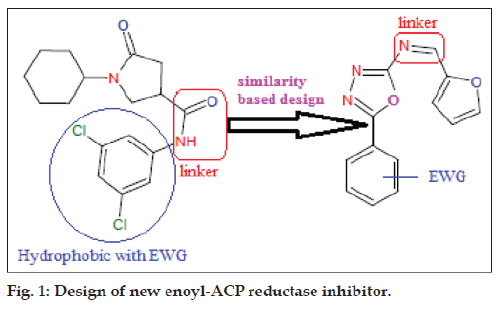 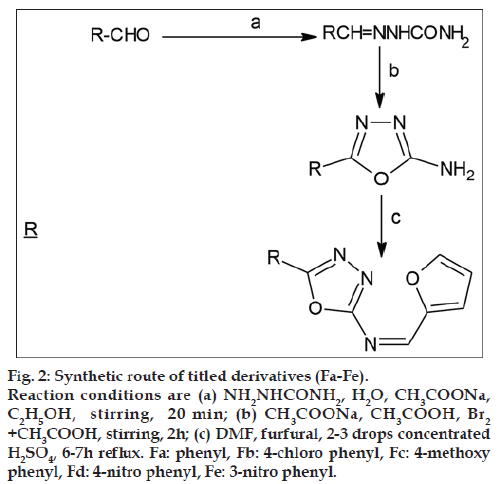 The structures of the newly synthesized compounds were ascertained by physical and spectral analysis. The FT‑IR of compound Fc showed two bands at 1617 and 1120 cm-1, which is due to the C=N and C‑O‑C group, respectively. In addition the 1H NMR displayed a sharp singlet at δ 7.95 ppm which is due to the imine proton and also a sharp singlet at δ 3.83 ppm was appeared for methoxyl protons of the 4th position of the phenyl ring of Fc. The aromatic and furyl protons of Fc are lies in the region between 7.01‑7.88. In Mass spectra of Fc a peak of 269(M+1) was observed in accordance with its molecular formula C14H11N3O3.

To validate the accuracy of the docking software, ArgusLab 4.0.1., the co‑crystallized ligand pyrrolidine carboxamide was redocked within the inhibitor binding cavity of enoyl‑ACP reductase. The compounds Fb and Fa were found to have almost similar binding interaction of that of the reported inhibitor towards the active site of the enzyme. Unsubstituted and parasubstituted phenyl system of the present scaffold was found to make good binding interaction towards the active site of the enzyme with a close proximity to the co‑factor. The oxadiazole core of the Fb was stacked with the NAD+ with an interplanar distance of 3.7Å (fig. 3). The chloro substituted phenyl unit of the Fb has adopted a conformation with dihedral angle of about 90º between the plane of the oxadiazole unit and has made prominent π‑π stacking interaction with the phenyl part of PHE149. Moreover this conformation pattern was previously established in the ligand‑enzyme substrate towards the inhibition of enol‑ACP reductase [24]. 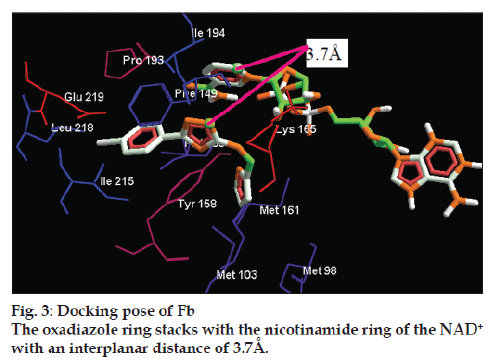 Figure 3: Docking pose of Fb
The oxadiazole ring stacks with the nicotinamide ring of the NAD+ with an interplanar distance of 3.7Å.

The p‑chloro unit present in the Fb has anchored into the hydrophobic cavity of ILE215 and LEU218. It is quite interesting to note that the increased binding energy of Fb is also due to the hydrogen bond between the nitrogen atom of azomethine and TYR158. This hydrogen bonding network of ligand TYR158 seems to be crucial feature among all InhA‑inhibitor complexes recognized so far [25] (fig. 4). We had also noticed that the binding pose of Fa and Fb was in almost similar fashion and the superimposed 1,3,4‑oxadiazole unit of both molecules were very close in proximity to the nicotinamide unit of cofactor. The poor activity of rest of the derivatives would be attributed to the factor that none of them had shown any prominent interactions with the binding cavity. The binding score and the amino acid residues enveloped by the scaffolds are mentioned in Table 1. The in silico toxicity assessment of all the synthesized compounds was done and interestingly none were predicted to have toxic effects except for Fe, which could have moderate ‘mutagenic effects’. All the synthesized compounds have an appreciable MIC value of the antitubercular nature when compared with the standard isoniazid and the values were shown in Table 2. 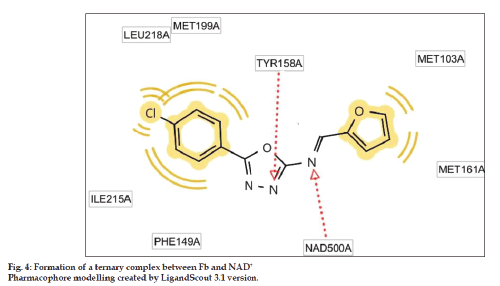 Figure 4: Formation of a ternary complex between Fb and NAD+
Pharmacophore modelling created by LigandScout 3.1 version.

Table 1: Molecular docking score of (fa-fe) in The active site of enoyl-acp reductase

The above results showed that the novel oxadiazole incorporated furan derivatives has excellent potential as antitubercular agents. Their potential activity may be attributed with the significant interactions towards the inhibitor binding cavity of Mycobacterium tuberculosis Enoyl‑ACP reductase. So it can be concluded from the above observations that the novel compounds, N‑(furan‑2‑yl)‑1‑(5‑substituted) phenyl‑1,3,4‑oxadiazol‑2‑yl) methanimines has excellent potential as antitubercular agents having the mechanism through Enoyl‑ACP reductase enzyme inhibition.

The authors are grateful to the Maratha Mandal’s Nathajirao G. Halgekar Institute of Dental Sciences and Research Centre; Belgaum for antitubercular activity. Our sincere thanks goes to Grace College of Pharmacy, Kerala, India, for carrying out the synthetic work for the present study. Authors also acknowledge the, SAIF IIT, Chennai, for carrying out the spectral analysis.