This article describes gas chromatography-flame ionization detection method for determination of 17 β-estradiol in rabbit plasma. 17 β-estradiol and internal standard progesterone were extracted from plasma using liquid-liquid extraction method. Linearity was found between 0.25 and 20 μg/ml (r 2 =0.994) for plasma samples. Intra-day and inter-day precision, expressed as the relative standard deviation were less than 5.5%, and accuracy (relative error) was less than 3.5%. The mean recovery of 17 β-estradiol samples was 94.4%. The limits of detection and quantification of method for plasma samples were 0.10 μg/ml and 0.15 μg/ml, respectively. Also, clinically used other 10 drugs were investigated to check for potential interferences and the method was successfully applied to the determination of 17 β-estradiol in New Zealand white rabbits.

17 β-estradiol (fig. 1) is the most potent of the natural human estrogens [1]. It is the most potent estrogen of a group of endogenous estrogen steroids which includes estrone and estriol. It is responsible for the growth of breast and reproductive epithelia, maturation of long bones, and development of secondary sexual characteristics. 17 β-estradiol and its semi‑synthetic esters are primarily used as menopausal hormones. It may also be used as replacement therapy for female hypogonadism or primary ovarian failure. The decrease of 17 β-estradiol at menopause is often accompanied by vascular instability and an increasing risk of osteoporosis [2].

In addition, no method is reported till date for determination of 17 β-estradiol by gas chromatography‑flame ionization detection (GC‑FID) in rabbit plasma. Therefore, the present work describes the determination of 17 β-estradiol in rabbit plasma. The developed method was validated by sensitivity, linearity, precision, accuracy and stability parameters according to the Center for Drug Evaluation and Research (CDER) guidance for bio‑analytical method validation [16].

The advantages of the present method include simple and single step extraction procedure using inexpensive chemicals and short run time. Also, this method was used to assay the 17 β-estradiol in plasma samples obtained from three rabbits which had been given as an oral tablet of Estrofem tablet (4 mg/kg, 17 β-estradiol).

Injection and detector temperature is 250 and 300°, respectively. Splitless injection was used. The carrier gas (N2) flow‑rate was kept constant during the run at 2 ml/min. Nitrogen (30 ml/min), hydrogen (44 ml/min) and dry air (400 ml/min) were used as auxiliary gases for the flame ionization detector.

Preparation of the standard and quality control solutions Ethylacetate is an extensively used extracting solvent because of its high polarity and volatility [14]. The solvent ethylacetate gave good recovery and the absolute recoveries of 17 β-estradiol and IS from rabbit plasma. No interfering peak and ghost peak were detected in the blank rabbit plasma in analysis (fig. 3c). 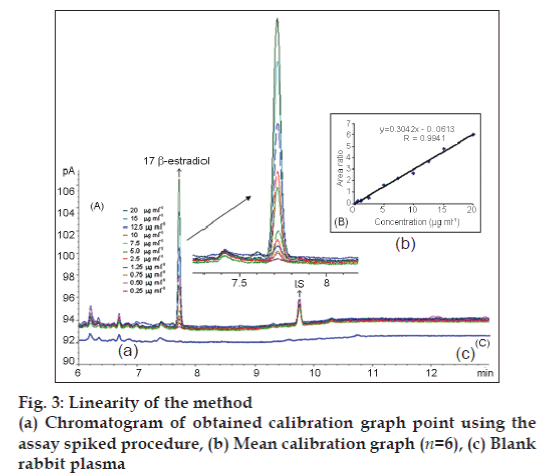 The use of IS is very important. When, IS is not available commercially, an alternative approach has been used. IS chosen should match the chromatographic properties, recovery and chemical properties of the analyte. Progesteron was found to match these criteria, and therefore was chosen as an IS. Other IS’s such as growth hormone, estriol, diazepam, atenolol, carbamazepine, a‑tocopherol, medazepam and prilocaine were also tried, but were rejected because of their low recovery and inefficient extraction. Progesteron was selected because of its high recovery as IS. Good chromatographic separation was obtained.

Blood samples were collected into the tubes containing disodium ethylenediaminetetraacetic acid (EDTA) and centrifuged at 4500×g for 10 min. A 0.2 ml of the resultant plasma samples was spiked with 0.1 ml of 17 β-estradiol and 0.1 ml of IS. After vortex mixing for 5 s, 1.9 ml water and then 5 ml ethyl acetate was added. The mixture was vortexed for 10 s and then centrifuged at 3000×g for 3 min. The organic phase was transferred into another tube and evaporated to dryness at room temperature under nitrogen gas. The dry residue was dissolved in 1 ml methanol. Two microlitre volumes were injected into the GC‑FID system.

The GC‑FID parameters used in the method development were based on the boiling point. The injection port and detector temperature was set to 250 and 300°, respectively [14]. Different temperature programs were investigated for method. At the end of this investigation, the temperature program of the GC‑FID was as follows: Initial temperature was 150°, held for 1.5 min, increased to 260° at a rate of 50°/ min held for 5 min, and finally to 270°/min at a rate of 10°/min and held for 3.3 min. The head pressure was set to ensure a hydrogen flow of 44 ml/min. The splitless mode was chosen. The solvent, column and acquisition parameters were chosen to be a starting point for the method development. In addition, preliminary precision and linearity studies performed during the development of the method showed that the 2 μl injection volume was reproducible and the peak response was significant at the analytical concentration chosen. Typical 17 β-estradiol and IS chromatogram obtained in rabbit plasma is presented in fig. 3.

It was determined that liquid‑phase extraction process was necessary at the sample preparation procedure. Several solvents (ethylacetate, hexane, dichloromethane, acetonitrile, butanol and chloroform) were tested for the extraction. Finally, ethylacetate and water mixture proved to be the most efficient in extracting 17 β-estradiol from rabbit plasma. There was no interference in the chromatogram of blank rabbit plasma. The retention times of 17 β-estradiol and IS in plasma were approximately 7.8 and 9.8 min, respectively (fig. 3a, c).

Eleven 17 β-estradiol standard samples at different concentration levels ranging from 0.25 to 20 μg/ml with constant concentration of IS (3 μg/ml) in spiked rabbit plasma samples were prepared and injected onto the GC‑FID system. The calibration curve (fig. 3b) was established by plotting the ratio of the peak areas of 17 β-estradiol and IS obtained after extraction of the spiked rabbit plasma sample. The regression equations were calculated from the calibration graphs, along with the standard deviations of the slope and intercept on the ordinate [Table 2].

Table 3: Precision And Accuracy Of 17β-Estradiol In Rabbit Plasma (N=6)

The limit of detection (LOD) is a parameter that provides the lowest concentration in a sample that can be detected from background noise, but not quantitated. The limit of quantification (LOQ) is defined as the lowest concentration of analyte that can be determined with acceptable precision and accuracy. The LOD and LOQ were studied to test the sensitivity of the method. The LOD was defined as a signal/noise ratio of 3:1 and the LOQ was with a S/N ratio of 10 [17]. The LOD and LOQ values for 17 β-estradiol were found to be 0.10 and 0.15 μg/ml, respectively (Table 2).

For the determination of the stability of 17 β-estradiol in plasma at room temperature, 4° and –20° refrigeration temperature, low (2.5 μg/ml) and high (15 μg/ml). 17 β-estradiol concentrations were kept for 24 h and 3 days. Then the stability measurements were carried out. Rabbit plasma samples were found to be stable after 3 days with no significant change in concentration when stored at 4 and –20°. The results of these stability studies are given in Table 5, where the percent recovery ratios are within the acceptance range of 90-110%. Application of the method

Prior to the study, the ethical protocol was approved by the Ethical Committee for Medical Experimental Research and Application Centre, Ataturk University.

Three rabbits were housed with free access to food and water, except for the final 2 h before the experiment. After a single oral administration of 4 mg/kg of Estrofem tablet, 1.0 ml of blood samples were collected from the marginal ear vein at 0, 15, 30, 60, 120, 180, 240, 360, 420 and 480 min time‑points into EDTA collection tubes. The blood was immediately centrifuged 6000 rpm for 10 min at ambient temperature. The supernatant plasma layer was separated and analysed for 17 β-estradiol concentrations as described above. 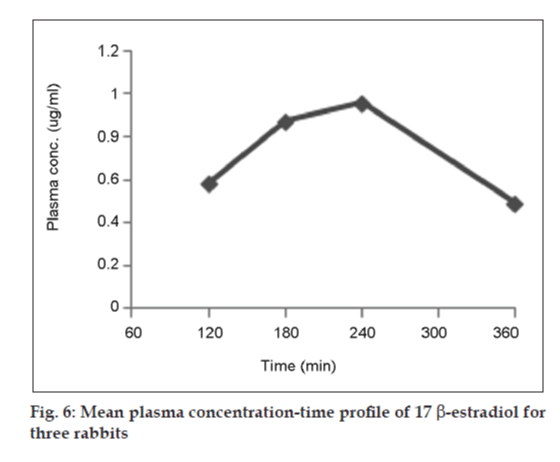 Ingrand et al. [9] has reported LC method with tandem mass detection for the analysis of 17‑β estradiol in in effluents of wastewater treatment plants. 17‑β estradiol is extracted via solid‑phase extraction using C18 cartridge. The calibration curve of LC‑MS‑MS method was linear for 17‑β estradiol in the range 10-50 ng/l. Intra‑ and inter‑day precision values were lower than 15%. The maximum recovery of 17‑β estradiol was 84%. The LOQ of method was found 10 ng/l. Detection using LC‑MS‑MS would be a more sensitive approach, but is costly and not yet available for every laboratory.

GC‑FID method (proposed method) is a little simpler and faster with respect to the deproteinization step and analysis time. In this study, the recovery percentage of 17‑β estradiol is higher than other reported method [9,10]. There is not a derivatization process. Also, the extraction processes do not take much time [4,10‑13]; additionally, the retention time is short which is an advantage [4,10,12,13].

The authors are grateful to the University of Ataturk for the financial support of this work.