Determination of Doxazosin Mesylate in Tablets by RP-HPLC

A simple, precise and rapid RP-HPLC method was developed for the determination of doxazosin mesylate in pharmaceutical formulations. The method was carried out on a Chromolith RP-C18 column using a mixture of potassium phosphate buffer and methanol (40:60 v/v) and detection was done at 251 nm. The linearity range was 1-5 µg/ml. The retention time of the drug was 3.8 min. The LOD and LOQ were found to be 0.1 µg/ml and 0.5 µg/ml, respectively.

The pure sample of doxazosin mesylate used in this development of analytical method was gifted by Ranbaxy Laboratories Ltd, New Delhi, India. Methanol and water used were of HPLC grade and obtained from Merck India Ltd, Mumbai, India. All other reagents used were of AR grade. Quantitative HPLC was performed on an isocratic high pressure liquid chromatograph (Shimadzu HPLC class 10A Series), using a fixed wavelength guided by a programmable photodiode array detector. The column used was Chromolith RP-C18 (100×4.6 mm,10μ).

The mobile phase used was a mixture of methanol and phosphate buffer (pH 5) in the ratio of 60:40% v/v. It was filtered before use through a 0.2 μm membrane filter. The elution was carried out isocratically at the flow rate of 1.0 ml/min. Detection was carried out at 251 nm at ambient temperature. A stock solution of the drug, prepared by dissolving 5 mg of doxazosin mesylate in a 50 ml volumetric flask containing mobile phase. This solution was further diluted with mobile phase to get the concentration of 10 μg/ml. Five sets of the drug solutions were prepared in a mobile phase containing doxazosin mesylate at a concentration range of 1-5 μg/ml. Each of these drug solutions (20 μl) in duplicate was injected in to the column and the peak area and the retention time was recorded and analyzed (fig. 1). 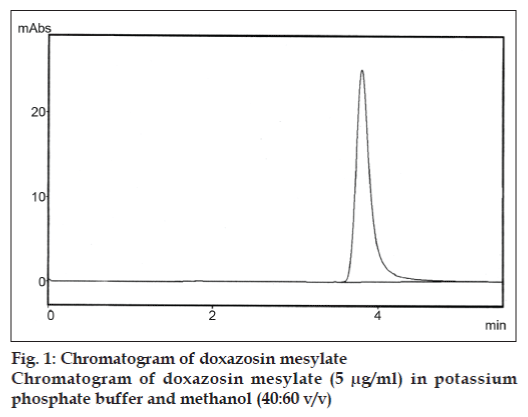 Not less than twenty tablets were weighed to obtain the average tablet weight. The tablets were then powdered. A sample of the powdered tablets, claimed to contain 5 mg of the active ingredient was taken in a clean and dry 50 ml volumetric flask. The contents of the flask were dissolved in mobile phase and volume was made up with the same. The mixture was shaken well and filtered through a 0.2 μm membrane filter and suitable aliquots of solutions were prepared.

From the aliquots two concentrations were injected and chromatograms were recorded and compared with the standard.

The absence of interfering peaks in the chromatogram suggests that the tablet excipients do not interfere with the estimation of the drug by proposed HPLC method. It was also observed that there was a substantial recovery of doxazosin mesylate when a known amount of the drug solution was added to a powdered sample of the tablet dosage form. The average recovery was found to be 100.3%. Analysis of marketed formulation (Doxacard, 1 mg/tablet, Cipla Ltd., India) was done. The estimated amount and percentage label claim was found to be 0.995 mg/tablet and 99.8±0.32, respectively. The limit of detection and limit of quantification was found to be 0.1 μg/ml and 0.5 μg/ml, respectively.

The results of our study indicate that the proposed RP-HPLC method is simple, rapid, precise and accurate. The method could be of immense use for the determination of doxazosin mesylate in its pharmaceutical dosage form.

The authors are thankful to Ranbaxy Laboratories Ltd., Mumbai, India for providing gift sample of doxazosin mesylate and College of Pharmacy, Sri Ramakrishna Institute of Paramedical Sciences, Coimbatore for providing the facilities to carry out the project work.