In the traditional system of medicine Ocimum sanctum Linn. is used to cure diseases like dysentery, bronchitis, malaria, bronchial asthma, diarrhea, arthritis, skin diseases, painful eye diseases, chronic fever. The essential oil obtained by using hydrodistillation of the leaves of Ocimum sanctum Linn. (purple variety) is collected throughout 1 y and analyzed employing gas chromatography equipped with flame ionization detector and gas chromatography connected with mass spectrometry. The yield of essential oil varied in the range from 0.14 to 0.21 % (w/w). 23 to 39 constituents were identified which represented 95.39±0.38 % of the total oil. The most abundant compound was identified as methyl eugenol with an average of 69.88±0.09 % with varying quantities from 55.48±0.36 to 76.78±0.54 %. The other constituents were beta-caryophyllene 10.40±0.06 %, alpha-ylangene 4.18±0.04 %, gamma-muurolene 3.64±0.04 % and borneol 2.02±0.01 %. The oil was found to be rich in phenylpropanoid (71.98±0.27 %) type constituents (average of 12 mo). A high amount of methyl eugenol (76.78±0.54 %) was observed during November while low (55.48±0.36 %) in April. It was noticed that when the plant was matured in April the accumulation of sesquiterpenes increased and phenylpropanoids decreased.

Ocimum sanctum L. (O. sanctum) (purple variety) of the family Lamiaceae is an erect, softly hairy, aromatic herb. Two types of O. sanctum come across within cultivation; with green leaves known as Sri or Lakshmi Tulsi and with purple leaves known as Krishna Tulsi [1]. The plant is commonly cultivated in temple premises and households as a sacred plant [2]. In the traditional system of medicine O. sanctum is used to cure diseases like dysentery, bronchitis, malaria, bronchial asthma, diarrhea, arthritis, skin diseases, painful eye diseases, chronic fever, etc., [3]. It has also been demonstrated to have anticancer, antifertility, antifungal, antidiabetic, anti-microbial, cardioprotective, hepatoprotective, analgesic, antiemetic, antispasmodic, adaptogenic and diaphoretic actions [4]. The dried powdered leaves mixed with mustard oil in the form of a paste are useful to cure pyorrhea, foul smell and other tooth troubles. The seeds are used in genito-urinary system disorders [4,5]. Various pharmacological activities viz., anticancer [6], radioprotective [7,8], anticarcinogenic [7], antioxidant [7,9], anticandidal [10], antileishmanial, immunomodulatory [11], immunotherapeutic [12], antimicrobial [9,13], antifertility [14], anti-inflammatory [15] and neuroprotective [16] properties of this plant have also been reported. The main constituent of the essential oil of O. sanctum from different regions of the world is represented in Table 1 [17-31]. The present investigation was planned to evaluate the influence of the environmental factors on the essential oil composition of the leaves of O. sanctum growing in North West Karnataka, India.

The leaves of O. sanctum were collected from three plants of a single population grown in properly maintained medicinal plant garden of Indian Council of Medical Research-National Institute of Traditional Medicine (ICMR-NITM), Belagavi and the collection was taken from similar plants throughout a year between May 2014 and April 2015 from an altitude of ~800 m from Belagavi district (N 15.88668; E 74.52353), Karnataka, India. The plant was identified by a Taxonomist, Dr. Harsha Hegde, at ICMR-NITM, Belagavi, where the herbarium specimen has been deposited (RMRC‑531).

The fresh plant material (100 g) was subjected to hydrodistillation by using a Clevenger-type apparatus for 3 h. The essential oil was collected and dehydrated over anhydrous sodium sulfate and stored in sealed vials at -4° until analysis. The oil yield per month collected from essential oil of leaves is shown in Table 1.

Table 2: Composition of the Essential Oil of O. sanctum Leaf Oil Collected From May 2014 TO April 2015

The chemical composition of the essential oil (essential oil in an equal ratio of n-hexane:dichloromethane made 1 % solution) was analyzed by using a gas chromatography (GC) (Varian 450 fitted with a fused silica capillary column BP-1 (100 % dimethyl polysiloxane; SGE Analytical Science), 30 m×0.25 mm inner diameter, 0.25 μm film thickness) under the experimental conditions reported earlier [32-34]. The oven temperature was programmed from 60-220° at 3°/min, using nitrogen as a carrier gas. The injector and the flame ionization detector (FID) temperature were set at 230° and 240°, respectively. Gas chromatography-mass spectrometry (GC-MS) analysis was employed by Thermo Scientific Trace Ultra GC interfaced with a Thermo Scientific ITQ 1100 mass spectrometer fitted with a BP-1 (100 % dimethylpolysiloxane; SGE Analytical Science) fused silica capillary column (30 m×0.25 mm; 0.25 μm film thickness). The oven temperature range was programmed from 60-220° at 3°/min and helium was used as carrier gas at 1.2 ml/min for analysis. The injector temperature was set at 230° and the injection volume was 0.1 μl in n-hexane, with a split ratio of 1:50. Mass spectra were taken at 70 eV with a mass range of mass to charge ratio (m/z) 40-450 and other parameters used were those reported earlier [35-37]. Identification of constituents was done based on retention index (RI, determined [linear temperature programmed analysis was used with the formula RI=100× [(tRi–v)–(tRZ–v)/(tR(Z+1)–v)–(tRZ–v)+Z] where tRi=retention time of sample peak; v=column void time; tRZ=retention time of n-alkane peak eluting immediately before sample peak; tR(Z+1)=retention time of n-alkane peak eluting immediately after sample peak; Z=carbon number of n-alkane peak eluting immediately before sample peak [38] concerning homologous series of n-alkanes C8-C25 under identical experimental conditions on BP-1 column), mass spectral (MS) library search NIST 08 MS Library (Version 2.0 f; Thermo Fisher Scientific Austria) and Wiley MS 9th Edition (Thermo Fisher Scientific Austria) and by comparing with the MS literature data [39] and co-injection of commercial samples from Sigma-Aldrich, India (≥98 % purity). The relative quantities of individual components were calculated based on the GC peak area (FID response) without using a correction factor. The statistical analysis of each sample injected in triplicate was performed by using the Microsoft excel worksheet.

Variation of essential oil content was identified. The chemical composition of the leaves essential oil of O. sanctum at different months of the studied year (May 2014 to April 2015) was analyzed by GC-MS according to their mass spectra and their relative retention indices determined on a non-polar, stationary phase capillary column. The percentage of each compound in three replicates is calculated as mean±standard error of mean (SEM) and represented in Table 2. 23 to 39 constituents comprising 95.39±0.38 % of the total oil were identified. The main compound was identified as methyl eugenol (69.88±0.09 %). The highest content of methyl eugenol (76.78±0.54 %) was observed in November (fig. 1) and the lowest in April (fig. 2). The second major compound identified as β-caryophyllene (10.40±0.06 %) with its highest level in April (20.32±0.20 %) and lowest content in November (7.67±0.23 %). The highest variation was observed in two major compounds viz., methyl eugenol and β-caryophyllene. During April, the quantity of methyl eugenol was decreased (55.48±0.36 %) and β-caryophyllene was increased (20.32±0.20 %) and in contrast, methyl eugenol had its greatest values in November (76.78±0.54 µ) and again this month the lowest level of β-caryophyllene (7.67±0.23 %) was observed). Apart from April and November, the levels of methyl eugenol and β-caryophyllene were observed more than 60 % and 8 %, respectively. It was observed that environmental factors such as temperature and rainfall (fig. 3) could not influence much in the chemical composition of the essential oil of O. sanctum except in April. The other constituents detected in fluctuating quantity throughout the examined period are shown in Table 2. The essential oils collected throughout a year were found to be phenylpropanoids rich constituents (71.98±0.27 %), followed by sesquiterpene hydrocarbons (17.89±0.20 %), oxygenated monoterpenes (2.54±0.04 %), oxygenated sesquiterpenes (1.64±0.0 %) and monoterpene hydrocarbons (0.56±0.02 %) (Table 2). 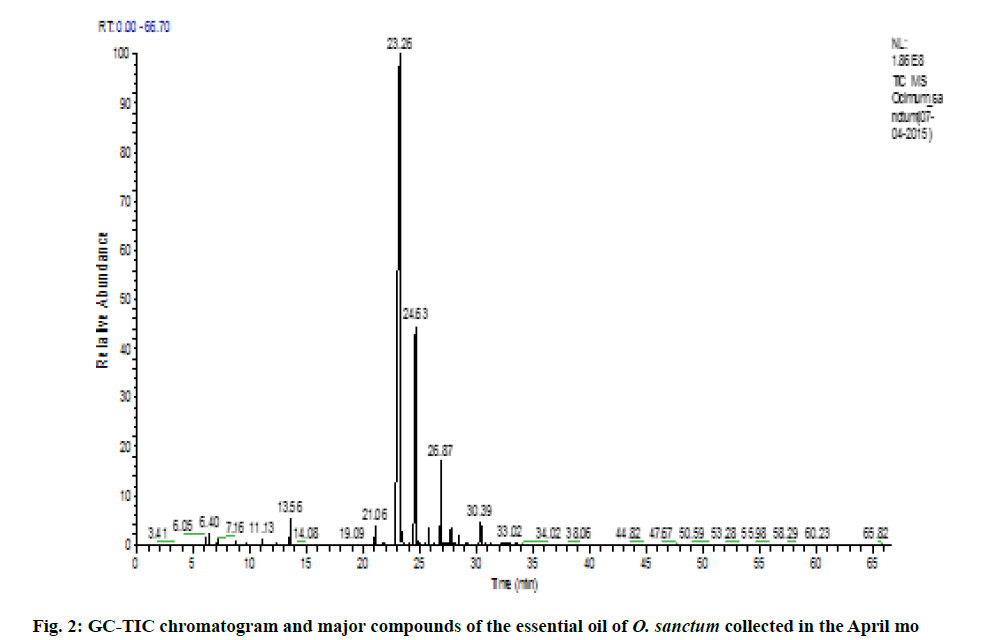 Figure 2: GC-TIC chromatogram and major compounds of the essential oil of O. sanctum collected in the April mo Figure 3: Average temperature, rainfall, content of methyl eugenol and β-caryophyllene of May 2014 to April 2015 mo

In the present study, significant variation was observed in taking consideration of two compounds viz., methyl eugenol and β-caryophyllene. In the month of April it was noticed that the plant was fully in ripened conditions with matured seeds, it may be because of the low level of methyl eugenol and higher content of β-caryophyllene. Methyl eugenol is a phenylpropene and phenylpropanoids contribute to all aspects of plant responses towards biotic and abiotic stimuli. They are not only indicators of plant stress responses upon variation of light or mineral treatment but were also key mediators of the plants resistance towards pests [40]. The decreasing amount of methyl eugenol could be due to the elevation of temperature as stress. On the other hand, sesquiterpenes are biogenetically derived from E, E-Farnesyl pyrophosphate following an initial cyclization and subsequent oxidative modifications [41]. According to Chen et al. [41], the accumulation patterns of sesquiterpenes were strongly influenced by the development process and the highest amount during the maturity of the plant. A similar pattern was observed in April during this study when the content of phenylpropanoid decreased and sesquiterpenes increased.

This study revealed that a high fluctuation of the quantity of methyl eugenol and β-caryophyllene was observed in April and May. The remaining months show somehow constant production of the major compounds methyl eugenol and β-caryophyllene and other minor compounds of the leaves of the plant O. sanctum grown in the Belagavi and nearby areas. Environmental conditions like temperature and rainfall did not much affect the production of essential oil constituents.

The authors are grateful to the Indian Council of Medical Research (ICMR), New Delhi, India for providing the necessary facilities and thankful to Mr. Mahesh B. Wagharwadi, Multi-Tasking Staff (MTS), Department of Phytochemistry, ICMR-NITM, Belagavi for the collection, processing and extraction of the oil.