Artemether (ARM) is a potent and rapidly acting antimalarial agent which is used as fi rst line therapy for the treatment of severe multi-drug resistant malaria [1,2]. It is effective against Plasmodium vivax as well as chloroquine-sensitive and chloroquine-resistant strains of P. falciparum and is enlisted in WHO list of Essential Medicines (WHO web site). Although ARM has good therapeutic potential in malaria, its poor aqueous solubility is a major limiting factor that hampers clinical effi cacy of ARM [3]. Currently, ARM is available as capsules for oral therapy and as an intramuscular (IM) oily injection for the treatment of severe malarial infections. Currently available oily IM injection of ARM causes considerable pain to patients on injection and it also shows slow and erratic absorption of ARM on IM administration [4]. Thus, development of a parenteral formulation of ARM to achieve effective and optimal utilization of ARM is needed for quick eradication of the malarial infection. It has been demonstrated that IV delivery of ARM results in the highest availability to body as compared to all other routes such as IM and intraperitoneal (IP) and can lead to quick eradication of the malarial infection [5]. However, the oily nature of current parenteral formulation of ARM makes it unsuitable for administration by intravenous (IV) route. Hence, the objective of this investigation was to develop a suitable IV formulation of ARM that enables its quick availability to the body with concomitant reduction in the pain on injection. Researchers have explored the potential of other novel delivery approaches such as liposomes [6] and nanostructured lipid carriers [7] to enable IV delivery of ARM and also to improve the therapeutic effi cacy of ARM. However, the utility of the microemulsion approach has not been established for improving the delivery of ARM. Microemulsions have gained a great interest as a drug delivery vehicle for hydrophobic drugs since last 2 decades. Their applications in oral [8], topical [9], nasal [10] and parenteral [11] delivery of hydrophobic drugs have been well established. In view of this, we aimed at developing aqua based microemulsion of ARM which can be administered by IV route. The microemulsion of ARM was evaluated for physical stability and also for its ability to improve anti-malarial activity of ARM as compared to the commercially available oily solution of ARM.

Based on the phase diagrams and preliminary solubility studies on ARM (data not shown), a microemulsion composition that could solubilize ARM to yield a concentration of 20 mg/ml was selected. Briefly, a suitable quantity of ARM was dissolved in a mixture of Crodamol EO, Labrasol, ethanol and Epikuron. This homogenous mixture was diluted with water or suitable parenteral vehicle (5% dextrose) to yield a microemulsion. The composition of the microemulsion is listed in Table 1. The average globule size and polydispersity index (PI) of microemulsion were determined (n=3) by the photon correlation spectroscopy (PCS; Beckman Coulter N5, Wipro, India). Microemulsion was diluted with double distilled water to ensure that the light scattering intensity (between 6e+004 to 1e+006), was within the instrument’s sensitivity range. Measurements were made at an angle of 900 for all the microemulsions. ARM microemulsion was subjected to various stress tests such as centrifugation at 5000 rpm for 20 min and freeze-thaw cycling. The globule size and physical stability of the ARM microemulsion after these stress tests was evaluated. The drug content of the microemulsion was evaluated by a previously reported validated HPTLC method [12].

The protocol for animal studies was approved by the Institutional Animal Ethics Committee of Bombay College of Pharmacy. The study design was based on papers reported by Chimanuka et al. and Joshi et al. with slight modifications [6,7]. The lethal ANKA strain of Plasmodium berghei was used for the experiments. In-house bred and mycoplasma free male Swiss mice (weighing around 25 g each) were infected by intraperitoneal inoculation of donor mouse blood diluted in acid citrate dextrose (ACD) buffer containing approximately 106 infected RBCs on day ‘0’. The mice were randomly divided into following groups (n=6 per group); Group 1 was control (no treatment), Group 2 was marketed ARM formulation (Larither®), Group 3 was blank microemulsion and Group 4 was ARM microemulsion.

On day 4 post infection when the mean parasitemia reached a level of 6.3% (±1.5%), Group 2, and 4 were administered with Larither® and ARM microemulsion (equivalent to 4 mg/kg of ARM) by intraperitoneal route. The dose of the ARM used for animal studies was same as that of Joshi et al. [7]. Group 3 received 100 μl of blank microemulsion. On day 8, blood was withdrawn from the tail vein and the blood smears were prepared. Blood smears were fixed with methanol and stained with Giemsa’s stain and the parasites were counted. Parasitemia was reported as percentage parasitemia after counting 1000 RBCs from each slide. The number of surviving animals in all the groups was recorded on the 31st day. Data was expressed as mean±SD and parasitemia of different groups were statistically assessed by the unpaired t test performed using Graphpad Instat software. Differences were considered signifi cant at P<0.05.

Chemical and physical stability of ARM micreomulsion was assessed at 5±3º for 1 month. ARM microemulsion was stored in glass vials with rubber stoppers and aluminum-crimped tops. Samples were removed at 0 and 30 days and assessed for ARM content. Physical stability of microemulsion was determined by monitoring mean globule size and polydispersity index. The data obtained about the ARM content and mean globule size of the microemulsion was subjected to statistical analysis. The statistical signifi cance of differences in the data was analyzed utilizing analysis of variance (ANOVA) followed by Bonferroni’s test (GraphPad InStat). Differences were considered statistically signifi cant at P<0.05.

The effi cacy of the ARM microemulsion and marketed formulation (Larither®) with respect to reduction in percent parasitemia is depicted in fig. 1. As shown in fig. 1, the control group (no treatment) showed highest parasitemia, validating the animal model used for the study. As compared to the control group, all the other groups showed reduction in the parasitemia during the course of study (P<0.05). Interestingly, ARM microemulsion showed highest reduction in the parasitemia (or highest antimalarial activity) as compared to all other groups (P<0.05). The higher antimalarial activity of the microemulsion could be attributed to the quick and complete release of ARM from nanostructure of microemulsion on contact with blood enabling optimal utilization of ARM for antimalarial activity. On the contrary, oily injection results in incomplete and sustained release of ARM. Furthermore, the availability of the ARM from oily injection is erratic and can vary greatly from individual to individual. All these factors considerably limit the therapeutic efficacy of the oily formulation. The utility of the microemulsion is further substantiated by the results of the survival study. The marketed formulation showed 50% survival rate whereas ARM microemulsion showed ~66% survival. 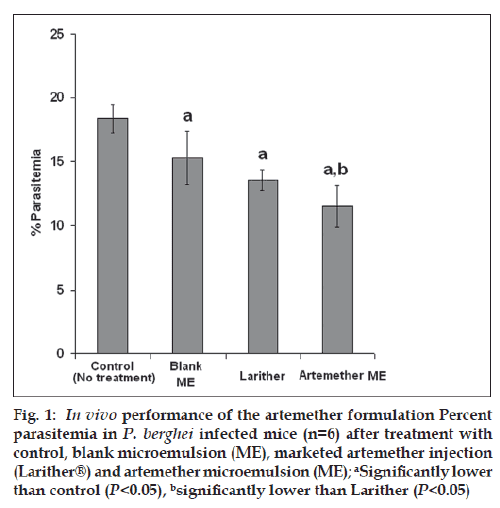