Development and evaluation of pharmacosomes of aceclofenac

Pharmacosomes are amphiphilic lipid vesicular systems containing phospholipid complexes with a potential to improve bioavailability of poorly water soluble as well as poorly lipophilic drugs. To improve the water solubility, bioavailability and minimize the gastrointestinal toxicity of aceclofenac, its pharmacosomes were prepared. Aceclofenac was complexed with phosphatidylcholine (80%) in two different ratios (1:1 and 2:1) using conventional solvent evaporation technique. Pharmacosomes thus prepared were subjected to solubility and drug content evaluation, scanning electron microscopy, differential scanning calorimetry, X ray powder diffraction and in vitro dissolution study. Pharmacosomes of aceclofenac were found to be disc shaped with rough surface in scanning electron microscopy. Drug content was found to be 91.88% (w/w) for aceclofenac phospholipid complex (1:1) and 89.03% (w/w) aceclofenac-phospholipid complex (2:1). Differential scanning calorimetric thermograms and X ray powder diffraction datas confirmed the formation of phospholipid complex. Solubility and dissolution profile of the prepared complex was found to be much better than aceclofenac.

Aceclofenac is a nonsteroidal antiinflamatory and analgesic agent. Most frequent side effects of aceclofenac on long-term administration are gastrointestinal (GI) disturbances, peptic ulceration and gastrointestinal bleeding. Apart from GI toxicity of aceclofenac, it is poorly water soluble, due to which its dissolution in GI fl uid is very low, which in turn adversely affect the bioavailability [1,2].

Studies have reported that phosphatidylcholine (PC) complex of nonsteroidal antiinfl amatory drugs (NSAIDs) improve the permeation of these drugs across the biomembranes and thereby improving their bioavailability to target sites. Phospholipids are hydrophobic zwitterionic molecules which upon complexation with diclofenac, have been reported to yield the amphiphilic products which show the improvement in water solubility of phospholipids and lipid solubility of diclofenac. In another study, the lipid complexes were also found to be reducing GI toxicity of NSAIDs [3,4].

GI safety of NSAIDs has been reported to be improved upon complexation or any other interaction with phospholipid. The phospholipids (acting as surfactants) provide a protective a hydrophobic cover on the surface of the mucus to protect the GI tissue [5,6]. A large number of lipids can bind with mucus glycoprotein by covalent and non-covalent bonds [7,8]. The various phospholipids can be used for the development of amphiphilic phospholipid complexes for improving the solubility in GI fl uid and permeation through the biomembranes [9,10].

Therefore, developing the drugs as lipid complexes (pharmacosomes) may prove to be a potential approaches to improve solubility and to minimize the GI toxicity of aceclofenac. Pharmacosomes are amphiphilic complexes of drugs (containing an active hydrogen atom) bound covalently, electrostatically or by hydrogen bonds to lipids (PC). Depending on the chemical structure of the drug lipid complex these are generally obtained as colloidal dispersions existing as ultrafine vesicular, micellar, or hexagonal aggregates.. The Pharmacosomes show the high percent loading, leakage proof with respect to drug loss through leakage (which is a common drawback with liposomes). Moreover, unlike liposomes they are easy to prepare, store (high stability) and effective (high bioavailability) drug delivery systems. [10,11].

Therefore the present work aims to develop and characterize the pharmacosomes of aceclofenac along with its in vitro drug release study.

To prepare the pharmacosomes of aceclofenac sodium, it was acidified first so that active hydrogen might be available for complexation. Aceclofenac acid was prepared by acidification of an aqueous solution of aceclofenac sodium, extraction into chloroform, and subsequent recrystallization. Aceclofenac-PC complex was prepared by associating Aceclofenac acid with PC in two different molar ratios viz. 1:1 and 2:1. The accurately weighed PC and aceclofenac acid were placed in a 100 ml round bottom fl ask and dissolved in dichloromethane. The mixture was refl uxed for 1 h. Then the solvent was evaporated off under vacuum at 40° in a rotary vacuum evaporator (Perfit Model No. 5600 Buchi type). The dried residues were collected and placed in vacuum desiccator overnight and then subjected to characterization.

To determine the drug content in aceclofenac-PC complex (Complex A and Complex B with drug: PC ratio of 1:1 and 2:1), complex equivalent to 50 mg aceclofenac was weighed and added in a volumetric fl ask with 100 ml of pH 6.8 phosphate buffer. Then the volumetric fl ask was stirred continuously for 24 h on a magnetic stirrer. At the end of 24 h, dilutions were made suitably and measured for the drug content at 274 nm UV spectrophotometrically.

To determine the change in solubility due to complexation, the apparent solubility of aceclofenac and aceclofenac pharmacosome was determined by adding an excess amount of drug and pharmacosome to 6 ml distilled water, 6.8 pH phosphate buffers and in n-octanol in screw capped vials.The vials were allowed to shake at 25° for 24 h in water bath. After equilibrium had been attained, the saturated solutions were centrifuge to remove excess drug (15 min, 1000 rpm). The supernatant was filtered immediately and rapidly through a 0.45 mm membrane filter and diluted suitably with same solvent to prevent crystallization. All the materials used for the filtration was brought to the same temperature as that of the solutions. Each experiment was performed in triplicate, filtered and diluted solutions were analyzed spectrophotometrically.

To detect the surface morphology of the pharmacosomes, SEM of complex was performed by Scanning Electron Microscope (JEOL JSM 5600, Japan) at UGC-DAE consortium Indore, India. Differential Scanning Calorimetry (DSC) thermograms of aceclofenac acid, phosphatidylcholine (80%) and the aceclofenac-PC complex (A and B) were recorded using a differential scanning calorimeter (2910 Modulated DSC V4.4E, TA Instruments, US). The thermal behavior was studied by heating 2.0±0.2 mg of each individual sample in a covered sample pan under nitrogen gas fl ow. The investigations were carried out over the temperature range 25-250º with a heating rate of 10º/min.

The crystalline state of aceclofenac in the different samples was evaluated with X-ray powder diffraction. Diffraction patterns were obtained on a Bruker Axs- D8 Discover Powder X-ray diffractometer, Germany. The X-ray generator was operated at 40 KV tube voltages and 40 mA of tube current, using the Ka lines of copper as the radiation source. The scanning angle ranged from 1 to 60o of 2θ in step scan mode (step width 1o min-1). Drug, phosphatidylcholine (80%), and drug-PC complexes were analyzed with X-ray diffractions.

In vitro dissolution studies for drug complex as well as plain drug were performed in triplicate in a USP XXIII six station dissolution test apparatus (Veego Model No.6DR, India) at 100 rpm and at 37º. An accurately weighed amount of the complex equivalent to 100 mg of drug was placed in to 900 ml media (pH 6.8 phosphate buffer). Samples (3 ml each) of dissolution fluid were withdrawn at different intervals and replaced with the equal volume of fresh media, to maintain sink conditions. Withdrawn samples were filtered (through a 0.45 mm membrane filter) and diluted suitably and then analyzed spectrophotometrically. Results were expressed as mean values±standard deviations and the significance of the difference observed was analyzed by the Student’s t-test.

Pharmacosomes of aceclofenac were prepared with two different molar ratios (1:1 and 2:1) of aceclofenac and phopsphatidylcholine in the presence of dichloromethane by conventional solvent evaporation technique. Drug content of aceclofenac in the complex, as estimated by UV Spectrophotometry (at 274 nm in pH 6.8 phosphate buffer), was found to be 91.88 % (w/w) for aceclofenac phospholipid complex (1:1) and 89.03 % (w/w) aceclofenac-phospholipid complex (2:1). Pharmacosomes showed a high percentage of drug loading, which is prime advantage over the liposomes. The good percent loading of the drug makes the delivery of drug possible for clinical use. Unlike liposomes, pharmacosomes preparations do not require any special methods like coating of these vesicular systems for improving the loading of the drug [13]. Various previous studies on pharmacosomes report that in the pharmacosomes the drug is reversibly bonded chemically with the lipids and thus show not only a good percent loading but also the better stability than liposomes [10]. Solubility of the aceclofenac complex was found to be much higher (in water and n-octanol) than the aceclofenac and aceclofenac physical mixture (Table 1). The increase in solubility of aceclofenac in the complex can be explained by the solubilization theory resulted from the formation of micelle in the medium and also by the amorphous nature of the complex. These amphiphilic surfactants (phospholipids) may increase the solubility of the drug by their wetting and dispersion properties [3,14]. Unlike non-polar nature of aceclofenac, the complex showed an amphiphilic nature, which in turn may prove to be responsible for improved bioavailability of the drug [7].

Apparent solubility of Aceclofenac and its complex in water, 6.8 pH phosphate buffer and n-octanol was determined at 25°, *Data expressed as mean values and standard deviations (± SD); n=3.

Table 1: Solubility Study of Aceclofenac and its Pharmacosomes PC showed two major peaks at 83.21° and 107.90° and a small peak at 64.45°, while aceclofenac showed a sharp endothermic peak at 154.01°. On the other hand complex (2:1) showed a broad peak (at 248.16°) and a sharp peak at 43.64°. Complex (1:1) showed two sharp peaks at 51.16° and 64.80°. There are clearly visible differences in the peaks between the individual complex and components of the complex. The thermogram of the complex was not showing the peaks representing aceclofenac and phospholipids. Moreover, the phase transition temperature of the compex was found to be lowered than that of PC. It has been reported that reduction in melting point and enthalpy accounts for reduced crystallinity of the drug [17]. The DSC data of the prepared complex showed a noticeable reduction in the enthalpy as well as the melting point in comparison with aceclofenac and PC. This confirmed the interaction between drug and PC. These results are well supported by various previous studies done on the phospholipid complexes of some phytoconstituents like silybin, puerarin curcumin, naringenin and gallic acid [18-20]. Acemetacin and indomethacin when complexed with 1,2-dipalmitoylphosphatidylcholine, showed the similar changes in the DSC thermogram of their complexes [21].

To see the changes in crystallinity of the drug in the aceclofenac phospholipid complex, XRPD analysis was conducted. The patterns of changes in peaks may indicate the degree of crystallinity (fig. 3). The integrated intensity (the area under the curves of the XRPD patterns) is the characteristics of given sample [22]. It was observed that crystalline diffraction peaks of aceclofenac were disappeared in XRPD of the complex which in turn confirmed the formation of phospholipid complex. The chemical bonding between drug and the phospholipids responsible for the development of pharmacosomes might have resulted into the significant change in XRPD. The phospholipid complexes of insulin and salmon calcitonin have been reported to improve the bioavailability of these proteins with similar results for their DSC and XRPD study [23,24]. 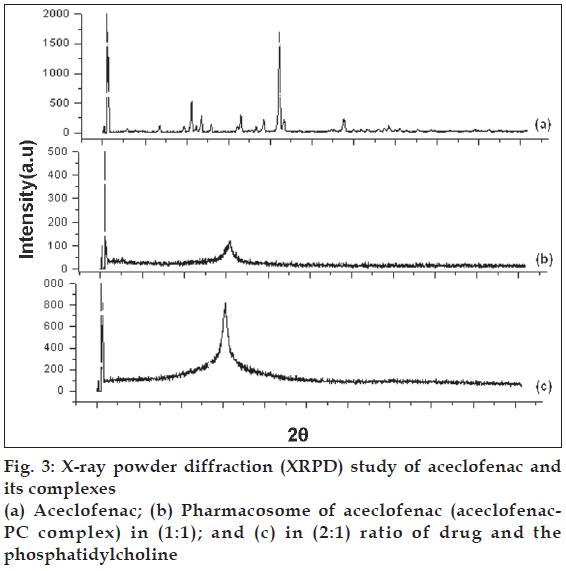 Fig. 3: X-ray powder diffraction (XRPD) study of aceclofenac and its complexes (a) Aceclofenac; (b) Pharmacosome of aceclofenac (aceclofenac- PC complex) in (1:1); and (c) in (2:1) ratio of drug and the phosphatidylcholine

The Pharmacosomes of aceclofenac showed better dissolution profile than the aceclofenac acid. Unlike the free aceclofenac (which showed a total of only 68.69% drug release at the end of 4 h) pharmacosome (1:1) showed 79.78% while pharmacosome (2:1) showed 76.17% at the end of 4 h of dissolution study in pH 6.8 phosphate buffer (fig. 4). The solid dissolution is a complex process which is affected by various factorslike the particle size, crystal habit, surface area, surface energies and wettability [25]. Wetting and dispersion properties of phospholipids (an amphiphilic surfactant) increased the solubility of the drug and hence improved the dissolution profile of the complex. The in-vitro drug release of the complexes of phytoconstituents like silybin and some xanthones, showed the pH (of media) dependent release [26,27]. 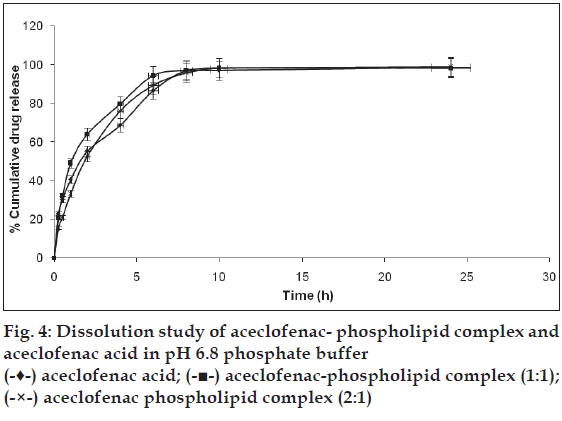 In the present study aceclofenac–phospholipid complex (pharmacosomes) were prepared by a simple and reproducible method and evaluated for various physicochemical parameters. The physicochemical investigations showed that aceclofenac formed a complex with phospholipids with better solubility and dissolution profile. The DSC and XRPD studies confirmed the formation of the complex. Thus it can be concluded that the pharmacosomes of aceclofenac may be of effective in improving bioavailability and gastrointestinal safety of the drug.

The pharmacosomes may be developed for adding the biopharmaceutical values (like solubility, permeability) to the delivery of NSAIDs as well as phytoconstituents for improving their bioavailability and GI safety.